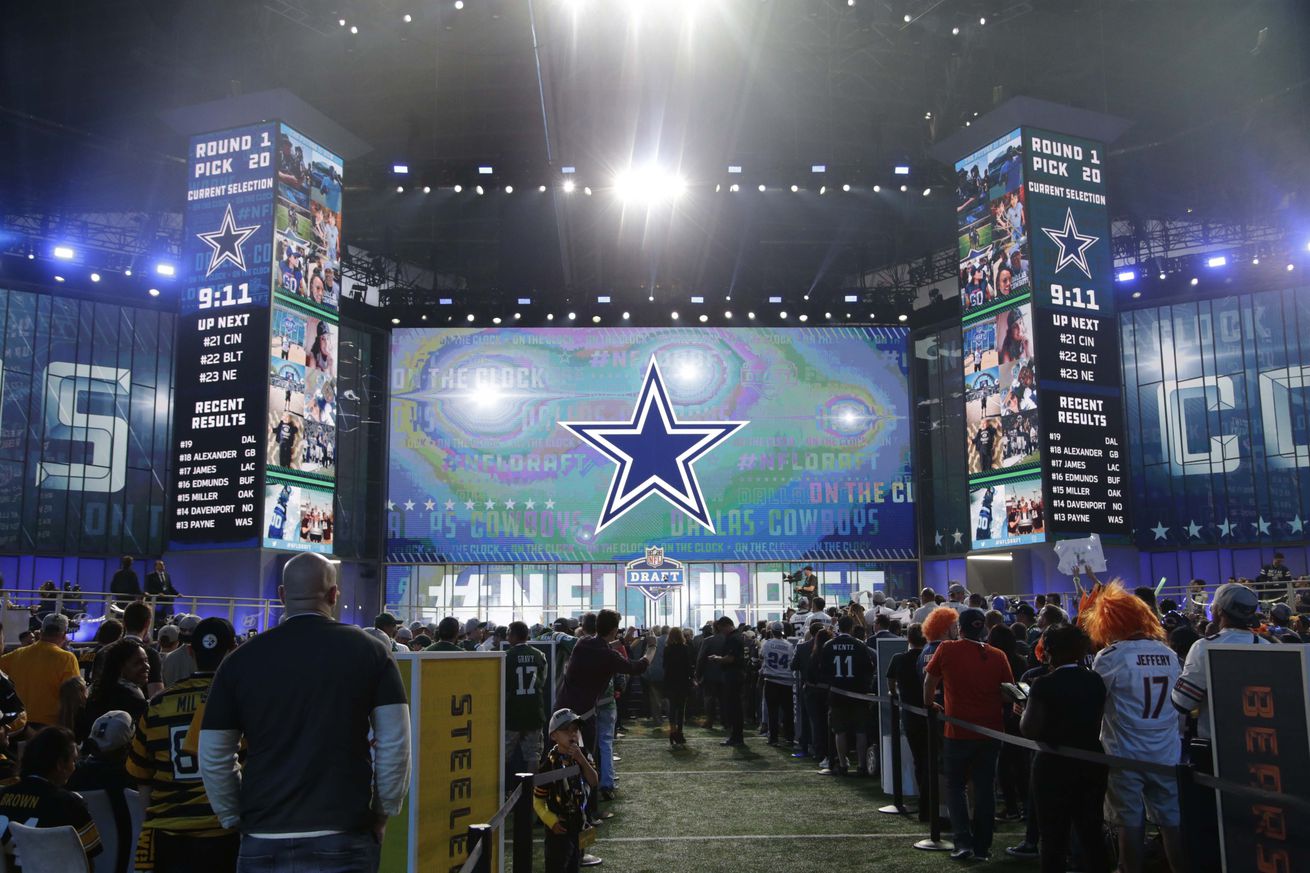 With free agency apparently done for now, the team has few holes to fill in the draft.

The draft is now just weeks away. For the Dallas Cowboys, most of the work has been done in free agency. The team uses free agent acquisitions to fill holes before the draft to help get the best talent available in the draft without having to force picks based on need. That is even more important this year given that their first-round pick has already been traded away to get Amari Cooper, a huge piece now on offense.

So where do they sit? Here is a projected depth chart based on players currently under contract. These are the names that seem most likely to make the 53-man roster after camp. There are some that you might wonder about not being included here, and we’ll get to that later. But for now, here is a best guess.

(1) Cameron Fleming and Joe Looney will back up multiple positions. Given his usage last year, it is also almost certain that Xavier Su’a-Filo will also make the team. They will likely add one more depth player on the line, possibly from among players already on the roster like Adam Redmond and Parker Ehringer. This, as with all other positions, could also be where a draftee is added if the value is right.

(2) Tyrone Crawford, Kerry Hyder, and Christian Covington may all be moved around between end and tackle. Exact roles will be sorted out in camp.

A little inside baseball. This was originally written after word surfaced that negotiations had resumed with DeMarcus Lawrence, but before the welcome announcement that an agreement had been reached. Hope I made all the right changes.

Now for those names not on this projection. Both Allen Hurns and Cedrick Wilson are coming off injury, and Hurns in particular is a big question mark as to whether he will be able to go this year. But if either is able to get on the practice field, they will certainly be in the mix at wide receiver. Lance Lenoir is also going to be part of the equation, but he would have to break through, which he has failed to do so far.

Fans of Rico Gathers are also going to wonder about him, but just chalk me up as believing that particular experiment has run its course. If he proves me wrong, great. I just don’t expect it,

Not included as well is Randy Gregory, but the team seems hopeful that he will be in the mix at some point, possibly after a short suspension. For now, though, he is not being counted.

There are several other players that are long shots but who could break through. This exercise focused only on those most likely to survive cuts.

Additionally, the starter and backup designations are a bit arbitrary and subject to shuffling in some cases. Tight end is one that is obvious, as no one should count out Jason Witten reclaiming the starting job. And strong safety is likely to see Jeff Heath not giving up his starting job to George Iloka without a fight. But that is more a matter of swapping names in the table rather than adding new ones.

Now the good news. Looking this over, there are 50 names already listed. That leaves very few holes to fill for the fall, obviously, with several other players already under contract vying to get in. That means the team has nothing they are really desperate to find in the draft.

One position that is very likely to be addressed is running back, which is very shallow for a team that relies so much on the ground game. That may change with the advent of Kellen Moore as offensive coordinator, but they still need at least one more back as insurance behind Ezekiel Elliott.

No disrespect to Iloka or Heath, but the strong safety position is the one place where a second- or third-round pick might come in and really challenge for the starting job. Still, if one does not emerge out of the draft, the team has that base covered.

Cornerback is also a bit shallow, so that may be a higher priority than you might think.

Other than that, the team is truly positioned to go for the best player available, with the obvious caveat that it should be at a position that will more than likely help the team. But this is a year where they are truly drafting for depth across the board. Rookies this year will have to do something special to move up and even make the roster, and it is very conceivable that all the starters and the majority of key backups already have a locker at the Star.

This may be a bit of my habitual optimism showing, but this looks to be as strong a pre-draft roster as I have seen since I started writing here almost a decade ago. When you are only looking for newly drafted players that will vie for backup jobs, your team is in very good shape, and there is not one starter listed above that doesn’t appear to have a decent grip on their job. Even more, looking at the current talent, there are a stunning number of players who are among the best at their position. Players that are at the least in the discussion for the top five in the league include Lawrence, Elliott, Travis Frederick, Zack Martin, the Jaylon Smith/Leighton Vander Esch duo, and if he’s healthy, Tyron Smith. Arguments for top ten placement can be made for Amari Cooper and Byron Jones. And if Dak Prescott is fully over the struggles from mid 2017 to mid 2018, he could sneak in there as well. This is truly a loaded team.

One thing that could throw a spanner into the works is the ever-present threat of an injury in camp or pre-season. Sadly, that always seems to happen, but the depth is also remarkably good. Dallas seems well prepared for whatever misfortune might occur.

The lack of a huge need this year, like they had last draft at left guard, is incredibly valuable. With no pick until late in the second round, it frees them up to draft the most effectively.