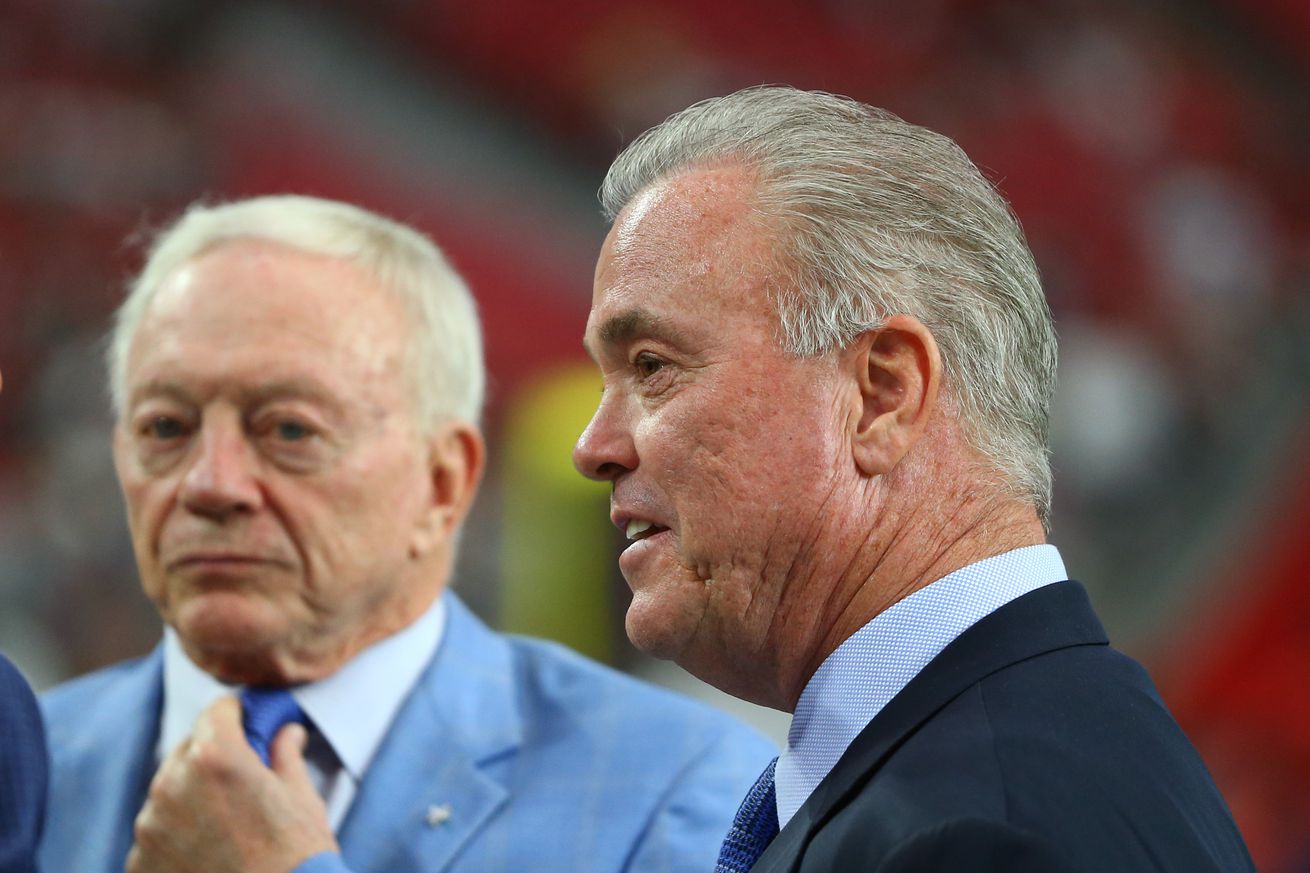 And right now, they are working beautifully.

The sun is shining and the birds are singing in the world of the Dallas Cowboys. Not because it is spring, but because the team just made the keystone move in what has become an impressively well done offseason. DeMarcus Lawrence is now back in the fold. His re-signing was always job 1 this year. Not only have they gotten it finalized, they swiftly eliminated any bad feelings ($105 million, with $65 million in guarantees, will do that). And that was just the capstone, with Robert Quinn now a potentially devastating bookend on the defensive line, some needed depth in the interior added in Christian Covington, Kerry Hyder offering some flexibility at both end and 3-tech the way Tyrone Crawford does, Randall Cobb filling most if not all of the void left by the departure of Cole Beasley, swing tackle taken care of with Cameron Fleming’s new deal, and all the intangibles in the world returning in future Hall of Fame tight end Jason Witten. (Admittedly, I have no idea why Jamize Olawale got the longest deal of any player with a new three-year contract, but hopefully Kellen Moore has some ideas for how to better utilize him.)

It has certainly changed perceptions of how the team has done so far, especially after the usual unwarranted dismay a week into free agency.

Man those takes about the #Cowboys offseason from 30 days ago are aging like Melisandre without the necklace.

The Cowboys show the Steelers how to turn the franchise tag into a long-term deal that the player will actually sign https://t.co/u4GX52yWYU

We’ve seen the results, but how did they get here? Let’s be honest, it has taken a quarter of a century for Dallas to really hit its stride in building what now looks to be the best roster at this point since the departure of Jimmy Johnson and the assumption of the GM mantle by owner Jerry Jones. Part of the long dry spell is undoubtedly that there was a huge amount of learning on the job to be done, and a lot of mistakes were made in the process. But now we may finally see the postseason fruits of doing it right. And the real credit doesn’t go to Jerry. It goes to his son, Stephen Jones, who is the true conductor of the talent acquisition and retention for the team. If you need any evidence for that, here is one big example.

According to sources, a key breakthrough on the negotiations came Thursday when Cowboys executive vice President Stephen Jones and DeMarcus Lawrence talked on the phone directly and were able to listen to each other’s side. The end result was the… https://t.co/gBPnfqybXO

Stephen is the cap master and contract guru. Along with the superb job done by Will McClay and the scouting staff, he has established some rules that have become evident the past few years, and hews very closely to them.

These could be applied by other teams, but before we delve into them, it must be noted that there is not just one way to go about building a winning NFL franchise. The most successful path in the league now actually only had two steps: Hire Bill Belichick as the head coach, and steal Tom Brady in the sixth round of the NFL draft.

Obviously, that is lightning that may never be caught in a bottle again. But another approach is to use free agency much more aggressively than the Cowboys do. It is more effective for teams that are in a serious rebuilding mode and consequently have a ton of cap space since they don’t have many players already on the roster to invest it in. Or a team that is close can go out and add a handful of pieces to put them over the top.

But Dallas has chosen a different, more long-ranged approach. The major points are this:

Build first with the draft

You can do that by tanking, either deliberately or, as happened to the Cowboys in 2015, have your franchise quarterback go down in preseason and have no viable solution to replace him at even a mediocre level. That nets you early first-round picks, which make it a lot easier to find potential stars.

Mostly, though, the Cowboys have had to find ways to build their roster with mid- to late-round picks. And they have done very well. Travis Frederick, Zack Martin, Lawrence, Byron Jones, Jaylon Smith, Dak Prescott, Leighton Vander Esch, Anthony Brown, and Xavier Woods all are players that have offered excellent to completely outstanding value for the draft capital used to acquire them. And you can include Amari Cooper, who so far has proven to be absolutely worth the first-round pick that was traded to the Oakland Raiders for him.

An added benefit to using the draft over free agency is the relative inexpensiveness of players on their rookie deals. It frees up a lot of cap space, which is primarily how the Cowboys wound up with a huge projected amount for 2020. They are already cashing that in with the Lawrence contract, but still have a lot (somewhere over $80 million according to Spotrac) to work with.

Once you have the talent, keep it

That was the driving principle behind the huge contract for Lawrence. The team actually missed an opportunity to save quite a bit in 2017 when the elected to put that first franchise tag on him. But he certainly proved himself, and reaped the justly deserved benefits. Now he is set to play through his most productive years with Dallas, and the structure of the deal leaves an affordable out after three seasons if he begins to decline. Given his ability to play through injury, unquestionable talent, work ethic, and leadership, he has a good chance of making it the entire five years. Now the team has work to do with Prescott, Cooper, Ezekiel Elliott and Byron Jones in the near term. Fortunately, the successful resolution of the impasse with Lawrence inspires a lot of confidence that they will be able to do so.

The key element is to identify who you really need to keep, and who can be let go. The calculation with Beasley was that his age argued against paying him what the Buffalo Bills did. Getting Cobb should go a long way to making it work out.

Discussed less, but still important, is that retaining your own players means you have a much better understanding of how they fit the scheme and the locker room than is possible with outside free agents. That can mean a lot. Some free agents may have remarkable talent, but come with a real question of future issues either fitting into the roster and culture, or off the field. The Cowboys’ approach helps avoid those nasty difficulties.

Use free agency, but wisely

This has long been a burr under the saddle for many fans who ride with the Cowboys. As illustrated in that first tweet above, impatient fans and media often wrung their hands over the team sitting by and letting the big, splashy names sign elsewhere. And that did not stop after the offseason in past years, as many of the “bargain bin” free agents the team did sign failed to pan out.

We still have no idea how players like Cobb, Hyder, and Covington, or Quinn, who was brought in via trade, are going to actually work out. But the optimism that most will make meaningful contributions seems justified.

Actually, the Cobb and Quinn moves indicate a bit of a shift towards a more aggressive stance in the offseason. It shows that while Stephen Jones has rules in place, he is not afraid to make modifications when the situation warrants. He may have been too reluctant in the past, but 2019 brought out a more proactive side. Having a better cap situation than in recent years certainly didn’t hurt, either.

Earlier in the year, Jerry and Stephen Jones made some remarks that they were going to be more aggressive in free agency. That was greeted with understandable skepticism, but the results have shown that they were telling us the truth. And they did it without violating the three key rules. They got more apparent talent than usual without contracts that could come back to hamstring them.

Enjoy the sunshine. It has been a much better offseason than we have seen in a long time.