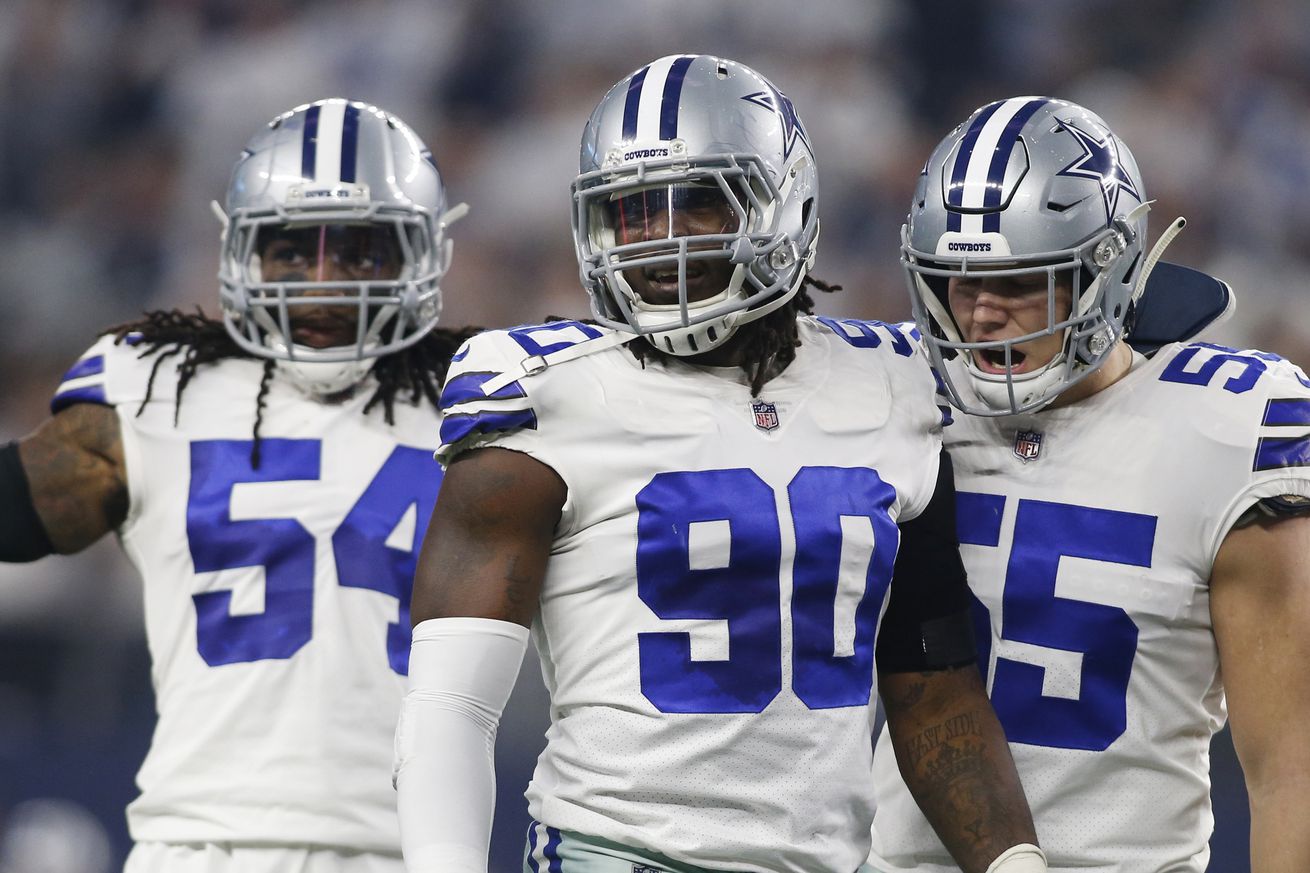 We got the news…

DeMarcus Lawrence has secured his bag. Here is why the deal was a no-brainer for Cowboys – Bob Sturm, The Athletic
Want to feel good about the Cowboys’ big money investment in Demarcus Lawrence? Come for the The Sturminator’s thoughts, then luxuriate in nearly 20 gifs that will remind you how thoroughly destructive Lawrence has been.

The Cowboys challenged him to prove his value to them in 2017. The premise, I am sure, was that if he could not perform at a reasonably high level, they would allow him into the free agency world on his own. The Cowboys would be done with him and avoid a sizable financial commitment.

He responded with 14.5 sacks, 14 tackles for loss, 79 total QB pressures, Pro Football Focus’ honor as the highest-graded defensive end in the NFL, a Pro Bowl invitation and an All-Pro honor.

The Cowboys then again challenged him to prove his value to them in 2018, another contract year under the first franchise tag. The premise, again, was that if Lawrence could not perform at a very high level, they would then allow him to enter free agency and keep their money.

He responded with 10.5 sacks, 15 tackles for loss and 63 total QB pressures. Pro Football Focus graded him as the league’s seventh-best defensive end (including the second-best against the run) and he received another Pro Bowl invitation.

Cost of DeMarcus Lawrence contract not nearly as great as the cost of not signing him – David Moore, SportsDay
Meanwhile, we can all agree that the alternative to signing Lawrence was pretty distasteful.

The Cowboys couldn’t afford the alternative.

A five-year, $105 million deal, with a guarantee of $65 million over the first three years, is a significant investment. But it’s not as great as the cost to the Cowboys credibility if this wasn’t the result.

Not signing the Pro Bowl defensive end would have contradicted what the Cowboys have said and done since the season came to an end in Los Angeles. It would have undercut claims that another divisional round exit is no longer enough, that this franchise needs to take the next step.

Lawrence has put the team ahead of himself by playing hurt. The torn left labrum he will have repaired later this week impacted him for part of the 2017 season and all of last season.

He plays with aggression and takes as much pride in his ability to defend the run as he does to rush the quarterback. He’s a leader in the locker room. He’s a cornerstone to one of the league’s best young defenses, a unit players and the organization believe can become even more dominant.

Not all of the deals worked out perfectly. Not every decision to let other players walk was correct either. The Cowboys do not want to play in the deep end of the free-agent pool. The risk is too great. They want to know what they are buying, and with a player’s track record they can make better assumptions.

It’s more than that. Lawrence had two surgeries in 2016. The first back surgery did not correct a disk issue. He could have shut it down that year but opted to keep playing even though it was obvious he was not the same player. He sat the final three regular-season games to be ready for the playoffs that year.

What message would the Cowboys have sent to the rest of the locker room if they let Lawrence walk or play another year on the franchise tag. Especially after proving 2017 was not a fluke with a second straight Pro Bowl appearance? Some would have pointed to the fact he played hurt and the Cowboys turned their back when it came time to reward him.

What Does the NFL’s Changing Pass-Rusher Value Mean for the 2019 Draft? – Robert Mays, The Ringer

For those who like both sides of the story you can read how the league’s most successful franchise of the last 20 years avoids big spending on the edge rusher position.

And if you want to learn how to win, there’s no better place to look than New England. The Patriots are the paragon of smart NFL team building. They exhaust every possible resource in pursuit of finding value and inefficiencies, and postmortems on their rosters year to year can provide valuable league-wide insights. For example, anyone who studies how Bill Belichick and Co. allocate resources can see that New England never, ever breaks the bank for a pass rusher. When star defensive end Trey Flowers hit free agency this spring, Belichick was content to let him sign with the Lions on a monster five-year, $90 million deal with a whopping $56 million guaranteed (that AAV comes in just behind Miller at no. 21 in the league). In 2016, when former first-round pick Chandler Jones was entering the final year of his contract, the Pats dealt him to Arizona for reserve guard Jonathan Cooper and a second-round pick.

And Belichick doesn’t limit his frugality to players he drafted, either. New England often looks for edge rushers in the free-agent and trade markets, but rarely dabbles in high-end talent. The Patriots have been to four Super Bowls in the past five seasons. None of those Super Bowl teams ranked higher than 23rd in percentage of the cap allocated to true edge rushers (i.e. Dont’a Hightower’s number is excluded from 2016), and twice, they’ve finished dead last (2017 and 2014). In 2018, they ranked 30th at 5.7 percent.

Does Isaiah Johnson’s upside make him worthy of a Cowboys Day 2 selection? – Kevin Turner, The Athletic
At The Athletic, Turner zeroes in on a possible Cowboys’ target in the secondary.

Today I’ll profile a player I like more than Bob does: University of Houston cornerback Isaiah Johnson.

Isaiah Johnson played 34 games in college but spent the first 12 as a wide receiver before shifting to cornerback for his final two seasons. He’s 6’2 tall and nearly 210 pounds, and has the length and size the Cowboys are looking for at cornerback. What makes Johnson especially unique though, is that he’s an easy mover, playing with loose hips and flexibility which are rare for tall players at skill positions.

Johnson has a ton of wrinkles to his game. On tape, it was obvious he lacked experience at cornerback. He is inconsistent, which makes him a risky selection. But Richard’s presence in Dallas is certainly a factor. The Cowboys appear to trust their defensive backs coach to develop players in the mold of those he instructed in Seattle.

Two weeks ago I mocked Johnson to the Cowboys in the third round. I did that partially because I know they have some interest in the player, but also partially due to Richard’s cornerback preferences.

Finding Draft Clues Based On Free Agency Moves – Rob Phillips, DallasCowboys.com
The Cowboys have proven to be a creature of habit when it comes to offseason moves the last few seasons. Phillips shows how the team’s free agency moves the last few years doesn’t preclude the team from doubling down in the draft on positions they stocked during free agency.

Here’s what we know: Cobb and Quinn are arguably the most accomplished newcomers to Dallas in the last five years. They certainly make receiver and defensive end less glaring needs. But you can’t rule out those two spots, or safety, or defensive tackle, or even tight end. A backup for Elliott is also a likely target.

The ruling isn’t in yet on Dallas’ decision to pick Charlton, though it’s clear his first two seasons have been disappointing for a first-round pick. The still-developing defensive end came on at the end of 2017, and the coaches hoped the progress would carry into the 2018 season. But Chalrton dealt with a shoulder injury which required surgery this offseason and finished with 27 tackles, 1.0 sacks and four tackles for loss.

Charlton’s third year will go a long way in determining how this draft class is ultimately viewed.

Do you want to know what positions Dallas will draft in 2019? Look to the current contracts. – VAfan, Blogging The Boys

VAfan notes that with most 2019 roster spots covered the Cowboys will have 2020 in mind when going into this year’s draft.

The Cowboys only have 3 players signed for 2020 in the secondary, but they will have 4 if they extend Byron Jones – Jones, Awuzie, Lewis, and Woods. The last three would then be up for new contracts in 2021, or out.

At the moment, they also have 4 main guys at CB – Jones, Awuzie, Brown, and Lewis – and 4 at safety – Woods, Iloka, Heath, and Frazier.

There are some other filler guys on the roster, but none of them look like they will ever be starters or play significant roles.

What this means is that the Cowboys are very likely to draft a safety and a cornerback this year. We all knew this, and it’s confirmed here.

The interesting about these positions is that a quality safety might start in 2019, while a cornerback is almost certainly someone they will give a year to develop, given the competition currently on the roster. So expect a safety to be drafted higher than the CB, and potentially at pick #58.

NFL madness! Sixteen teams to spotlight for the 2019 season – Adam Schein, NFL.com
The Cowboys have had an interesting and seemingly impressive off-season thus far and folks around the league are saying they’re a team to watch.

2) Dallas Cowboys: Dallas’ defense is fantastic. Ezekiel Elliott is a star. With Amari Cooper out wide on Day 1 of the season after racking up 53 catches, 725 yards and six scores in nine games as a trade acquisition last year, Dak Prescott is poised to turn in his best NFL campaign yet. And I love the professionalism Jason Witten and Randall Cobb bring.

Steelers’ Ryan Shazier shows progress with box jump – Kevin Patra, NFL.com
I hate the Pittsburgh Steelers. And if you’re a Cowboys fan you do as well. It’s in our DNA. But even the most hard-hearted Cowboys fan can be happy to see Ryan Shazier’s comeback from a devastating injury.

Shazier’s advancement is impressive in its rapid development, but it’s the linebacker’s determination, dedication and aggression in the face of bitter odds that offers motivation.

“He’s grinding every day. It’s been very intense,” Shazier’s father, Vernon, told ESPN’s Jeremy Fowler. “He’s come a long way but has a long ways to go. We’re grateful for the progress he’s achieved. He’s been dedicated to doing all he can to make as much progress as he can. We don’t have a ceiling, just working day to day.

“You know how the journey began, so to see him do that is very encouraging.”

A fun question regarding non-Cowboys throughout the NFL. Who makes your five?