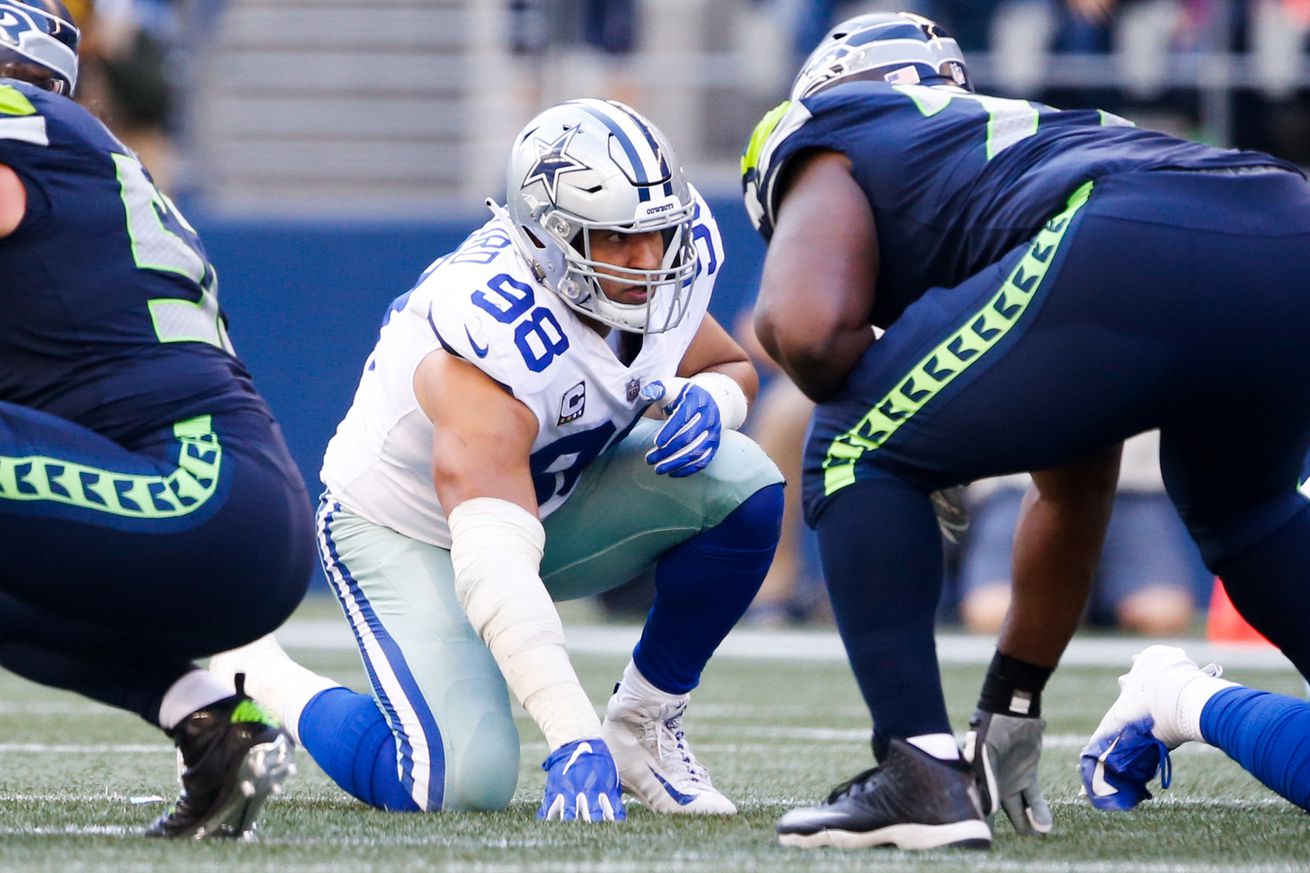 We look at the athleticism and college production of DT prospects to find out whether there are any DTs that could provide an upgrade for the Cowboys.

On Monday this week we re-introduced you to a metric called SPARQ, which is a single number designed to summarize a player’s athleticism. The number is calculated with a proprietary formula that incorporates player weight, bench press, broad jump, vertical jump, forty-yard dash, ten-yard split, short shuttle and 3-cone drill.

In that post about edge rushers, we combined the SPARQ metric with metrics for the college production of edge rushers to see which draft prospects would emerge as the most productive AND most athletic.

We’ve established in previous years that the Production Ratio looks like a solid indicator for how good a college player could be at the NFL level. If you are unfamiliar with the Production Ratio, follow the link above and read up on it. Here’s how it’s calculated:

For a full rundown of this year’s DT class and the associated production ratios, follow this link. Or simply check out the following table, which lists the production ratios for all DTs ranked within the top 256 on The Draft Network’s big board.

Overall, this is not a particularly impressive DT class. Ed Oliver is the clear standout here, but he’ll be long gone before the Cowboys even turn on the lights in their war room.

But there are four players above the 1.5-point threshold that currently look like they could be available when the Cowboys are on the clock, Jaylon Ferguson, Khalen Saunders, Daniel Wise, and perhaps Zach Allen (who might move inside for the Cowboys), who is included here by special request of my good friend rabblerousr.

Another special request came from another good friend, KD Drummond, who asked for John Cominsky to be included. And then I added Jaylon Ferguson, because I thought if those two can have pet cats, so can I.

KD’s choice, Cominsky, highlights the limitations of this stat-based approach. Cominsky hails from Division II Charleston, where he posted crazy numbers, but against second-tier competition. As with all these ratios, you’ll probably have to factor in the fact that not every player will have played against SEC-level competition. The Mountain East Conference, where Cominsky played, is not the SEC, so that’s something worth keeping in mind.

Something else to keep in mind is that Cominsky, like Ferguson and Allen, was an edge rusher in college, so comparing the production of edge rushers to defensive tackles is not quite fair – but we’re doing it anyway!

Ultimately, the Cowboys must decide what type of players they want for their DT spot. If they just want a big guy who can sit down on two offensive linemen, they can get a guy like that on the third day of the draft. Better yet, they can get a cheap, proven veteran in free agency to do just that job and invest their picks in positions that may be harder to find – like that elusive 3-technique.

With production out of the way, let’s look at the athleticism of this year’s DT class, for which we’ll be using the players’ SPARQ scores, courtesy of Zach Whitman at 3sigmaathlete.com.

A few notes on the data:

Going by the available pSPARQ scores, there are nine defensive tackles with above average athleticism in this draft class, led by Ed Oliver (147.1). So now that we know who the superior athletes in this DT class are, we can pair that with the production numbers from above and we should get an idea who the impact DTs in this draft class could be.

Here’s where we combine the two metrics to find the most productive AND the most athletic DTs in this draft. The graph below plots the Production Ratio against the SPARQ score for the 20 DTs for which we have SPARQ data.

Before we get started on each of the quadrants, we need to understand that there are at least three different types of defensive tackles, all with different athletic markers, and all with a different track record of production.

The A quadrant (top right) shows the players that have a strong track record of production and have the prerequisite athleticism that should allow them to compete at the NFL level.

This class has six players in this quadrant (but barely). John Cominsky comes from a small school so there is a question about how his production will translate to the NFL. Four others, (Ed Oliver, Quinnen Williams, Jerry Tillery, and Charles Omenihu) are all likely to be gone by the time the Cowboys are on the clock, so if the Cowboys want to draft an A-quadrant DT, Zach Allen looks like their guy.

The B quadrant (bottom right) shows superior athletes whose college production has been below average. And while this doesn’t automatically invalidate them as potential prospects, it does raise questions. Teams need to understand why these guys didn’t have the kind of production other players, often with inferior athleticism, had. Was it the scheme they played in, the players they played next to, the opponents they played against, the role they were asked to play, or are they simply not very good football players?

The C quadrant (top left) features players with a strong record of production at the college level, but who have questions regarding their athletic ability. The red line in the table above seems like a hard arbiter, but that red line could easily move left or right if you weight some of the input variables a little differently, as teams likely do.

So there really isn’t that much of a difference between Zach Allen and Khalen Saunders for example, and even Daniel Wise might be a god option for the Cowboys

If you’re the Cowboys, those are the three players you might want to take a closer look at, though it looks like they’ve set their sights somewhere else:

The D quadrant (bottom left) is a tough quadrant to be in because it suggests you are a below average athlete with below average production, not exactly a ringing endorsement for an NFL career as a pass rusher. But there might be an NFL future for some of these guys as a 1-technique.

Once again, the mandatory copy/paste caveat: There are a multitude of factors that determine how well a prospect will do in the NFL. College production and athletic markers are just some of them, but at the very least, they provide some interesting input into the evaluation process.

Given these numbers, and given what you know about these prospects, would you want the Cowboys to draft a defensive tackle early in the draft, and which one?

There’s not a lot of historic SPARQ data for DTs, but here are some of the numbers I could get my hands on.

You’ll notice that there’s much less of a correlation here between NFL success and the position in the quadrants than we saw for edge rushers. In fact, the names here seem all over the place, at least at first glance.

But that comes back to the earlier point we made: You can find quality defensive tackles all over the draft and all over the quadrants. Just don’t expect those guys to be a pass rushing threat. If you want your guy to get to the QB, you’ll want a guy with A-quadrant traits.