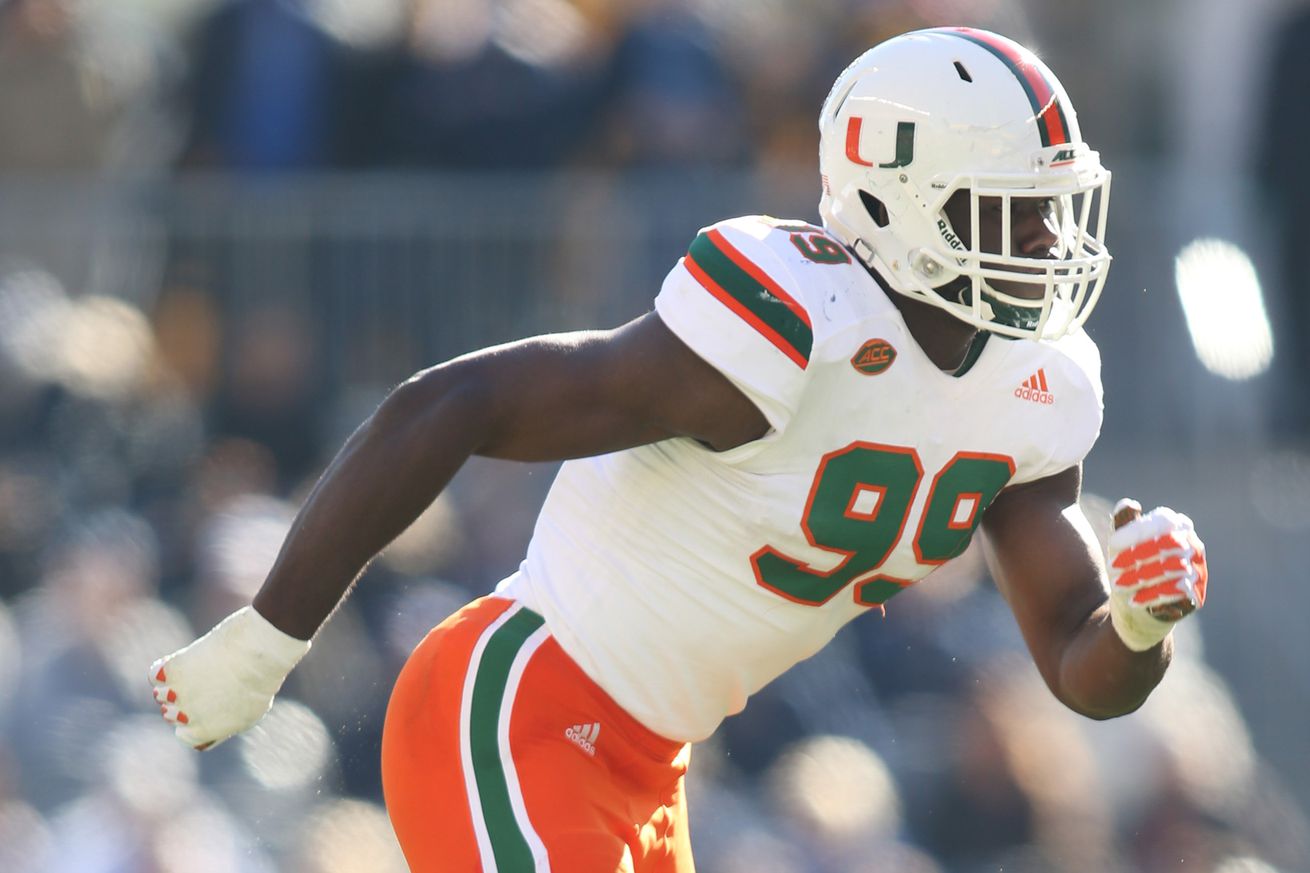 With less than two weeks before the 2019 NFL Draft, let’s start putting some names to the Cowboys.

With the combine, free agency, Pro Days, and most official visits in the rear-view mirror, the 2019 NFL Draft is just two weeks away. This offseason, the Cowboys have spent a lot of their times filling needs with free agency (Randall Cobb, Robert Quinn, Kerry Hyder, Christian Covington) to set themselves up come draft day to draft the best player available on their board when they’re on the clock. Today, we will do a “post-free agency” seven-round mock draft in an effort to mirror what the Cowboys may be thinking during the draft. In this exercise we’ll be using recent draft trends from the Cowboys over the last few years, as well as Will McClay’s, and his scouts, tendencies at certain positions.

In this seven-round mock draft, I used the The Draft Network’s mock draft simulator to give me a life-like look at how the draft could go. Using their TDN predictive big board, this gives us realistic options that could be available in rounds one through seven for the Dallas Cowboys.

After filling obvious holes at DE, DT, and WR with free agency and trades, safety is the one clear need for the Cowboys heading into the NFL Draft despite the George Iloka signing. Before free agency kicked off, it was my belief the Cowboys were not going to be interested in spending big-time money at the safety position in free agency and would be looking to the draft to fill that need. That’s the exact approach the Cowboys’ front office took and that’s the way they go with the 58th overall pick in the 2019 NFL draft.

From everything I’m gathering, I think the #Cowboys are more interested in drafting at the safety position (maybe as high as 58th overall) than they are spending money in free agency.

Juan Thornhill is the pick in the second round and a excellent one. Playing as a true FS and CB at University of Virginia, Thornhill plays with great athleticism, ball skills, and range when patrolling the back end of the secondary. His tape was second-round worthy in itself, but then he went out and ran a 4.42 40 yard dash, 44.0” vertical jump, and 141.0” broad jump. Thornhill plays with great instincts and eye discipline to drive on the football in the middle of the field. He made a living at UVA taking the football away, being a very good cover corner/safety, and using his size to bully smaller receivers throughout their route stem. He will need to improve on his pursuit angles, as well as his wrap-up ability when tackling. The former Cavalier DB would be a walk in starter at free safety for the Cowboys, and would provide the versatility to play cornerback if need be. Juan Thornhill was an “official visit” for the Cowboys, and the team is in fact very interested in the 6’0”, 205-lb defensive back.

If Byron Jones can go 27th overall.. So can Juan Thornhill! At LCB here in 2017. Both long, explosive CB/S hybrid players..

Trysten Hill is a name that keeps popping up in regards to the Cowboys draft plans. At 6’3” and 308-lbs, Hill plays with tremendous explosiveness and burst from the interior of the defensive line. After lining up at both DE and DT for the UCF Knights, Hill would slide into Rod Marinelli’s defense and play as a one-gapping penetrating tackle for the Dallas defensive line. His career arch at UCF definitely raises some eyebrows, but his play on the field is good enough to find himself drafted in the top 100. The “Hill hype” started after testing off the charts at the NFL combine back in February, where he posted an impressive 5.04 40-yard dash, 35.0” vertical jump, and a 115.0” broad jump. Those numbers should have surprised no one who evaluated Hill’s tape at UCF.

Hill has an explosive first step which he uses to beat interior lineman with quickness off the snap. Along with his twitched up lower half, Hill plays with quick hands, and a relentless motor when running down the ball carrier. He plays so hard that at time he seems to be rushing out of control, which leads to over pursuing ball carriers, and rushing past the pocket. Hill is the type of player who will live in the backfield pay after play, which can result in a ton of splash plays, but a ton of plays where he leaves his gap and gives up big plays on the ground. Trysten Hill was also one of the Cowboys official visits, and would fit perfectly in Rod Marinelli’s defense as disruptive 3-technique with Maliek Collins heading into the final year of his contract.

These are the splash plays you see with Hill that make you realize his ceiling is high. pic.twitter.com/K2fOJfDUVu

Other options still on the board: Daniel Wise, Isaac Nauta, Justin Hollins

When drafting defensive ends over the last few seasons, the Cowboys seem to always value EDGE rushers with more arm length. DeMarcus Lawrence (33 3/4”), Randy Gregory (34”), Taco Charlton (34 1/4”), and Dorance Armstrong (34 3/4”) all have over 33 3/4” arms. What that tells me is that arm length is a trait the Cowboys’ front office values a ton. Joe Jackson was one of the only EDGE rushers left on the board with above average arm length, but also quality tape to backup his intriguing physical traits.

Jackson, a junior out of University of Miami has a more than just arm length to his game. He rushes with a ton of power in his upper body and has a thickly built lower body that helps when covering speed-to-power. Jackson showed great point of attack skills at Miami playing with quality hand placement/technique and pad level. He plays with a high-motor and consistently chases running backs down from the backside. He is not a guy who will “wow” you with his pure speed and athletic ability when rushing the passer, but he does have enough juice to threaten the edge with speed. Jackson would be a nice addition in the fourth round to offer some juice off the left side, as well as being an adequate run defender.

I like what I’ve seen from Joe Jackson (#99) from Miami (FL). Rips through the tight end and runs the arc to get pressure on Daniel Jones. pic.twitter.com/sAcZJWpwdL

Other options still on the board: Daylon Mack, Michael Jackson, Bobby Evans

The Cowboys have been in no way linked to Isaac Nauta throughout this draft process, but this late in the draft, they’d be silly to not consider a player that was once looked at as a second rounder, before bombing the combine. Nauta put up historically bad numbers at the combine back in February, but the tape shows a player that plays much quicker than those numbers suggest. When drafting TE’s the Cowboys’ front office often values tight ends that line up in-line, and can serve as both capable receivers and blockers in the running game.

Throughout his three years at Georgia, Nauta had little issues creating separation with his route running ability, physical style of play, and flexibility in his hips. He caught almost everything thrown his way using his soft hands to pluck the ball out of the air. Nauta showed the ability to catch the football up-and-away from his frame showing intriguing catch radius skills. He can make plays both at the catch point and after the catch in all three levels of the field, which helps with his versatility in where he can line up in the offensive formation. While he’s not known for being a glass-eating blocker, he did show the ability to move defensive lineman in the running game with a “get in the way” approach. While his all around game needs some developing, Nauta is a great mid-round addition to develop as a true TE2 in future years.

Other options still on the board: Jakobi Meyers, Jalen Jelks, Khari Willis

The Cowboys had excellent luck with a former-Ohio State RB ta few years ago in Ezekiel Elliott, so why not try this again? The Cowboys have shown quite a bit of interest in Weber throughout the offseason, bringing in the 5’10” and 211-lb running back for one of their 30 official visits. Weber had himself a nice combine posting a 4.47 40 yard dash and 22 bench press reps.

He is a similar style of runner to Ezekiel Elliott, using his workhorse frame to turn the three yard gains into five yard gains, but lacks the top-notch second gear to be a consistent home run hitter at the next level. Along with his size, he has above average vision which allows him to pick up the dirt yards when the holes aren’t always there. He maintains great balance through contact, which is his way of making up for the lack of speed and twitch. While Weber does have three-down back traits, his lack of lower body explosiveness and change of direction skills will likely force him down the board to the later rounds, which is exactly where the Cowboys will be looking to land a complement to Ezekiel Elliott.

Don’t forget about the long Mike Weber run that set up the last TD.

Other options still on the board: Montre Hartage, Greg Gaines, Jonathan Ledbetter

We keep hearing cornerback being thrown around as a sneaky need for the Dallas Cowboys. With Byron Jones playing on his fifth-year option in 2019, and Anthony Brown set to hit free agency in 2020, Dallas needs to address cornerback position at some point in this draft. Dallas brought Derrek Thomas in for one of their 30 official visits, so the interest is there for the team. Derrek Thomas out of Baylor is a 6’3” and 189-lb defensive back with 33 3/4” arms and 10” hands. While Kris Richard gets a towel to clean his slobber off the floor, let’s take a look at the style of player Thomas is.

He started his career at Temple before injuries and position change forced him to transfer to University of Baylor in 2018. The former wide receiver made a big impact for the Bears defense in 2018 with 21 tackles, one interception, and seven passes defended. Thomas plays with tremendous length at the position and pairs his size and length with nice athletic traits. He is a 4.44 athlete with 39.5” vertical and 131.0” broad jump. On tape, he is at his best when jamming receivers at the line of scrimmage using his length to disrupt wideouts releases by using his wingspan to overwhelm them. He played with above average footwork, backpedal, and drive skills to consistently be around the football. While Thomas is still a work in progress at the cornerback position, his length and physicality at the line of scrimmage will be traits that Kris Richard stands on a table for.