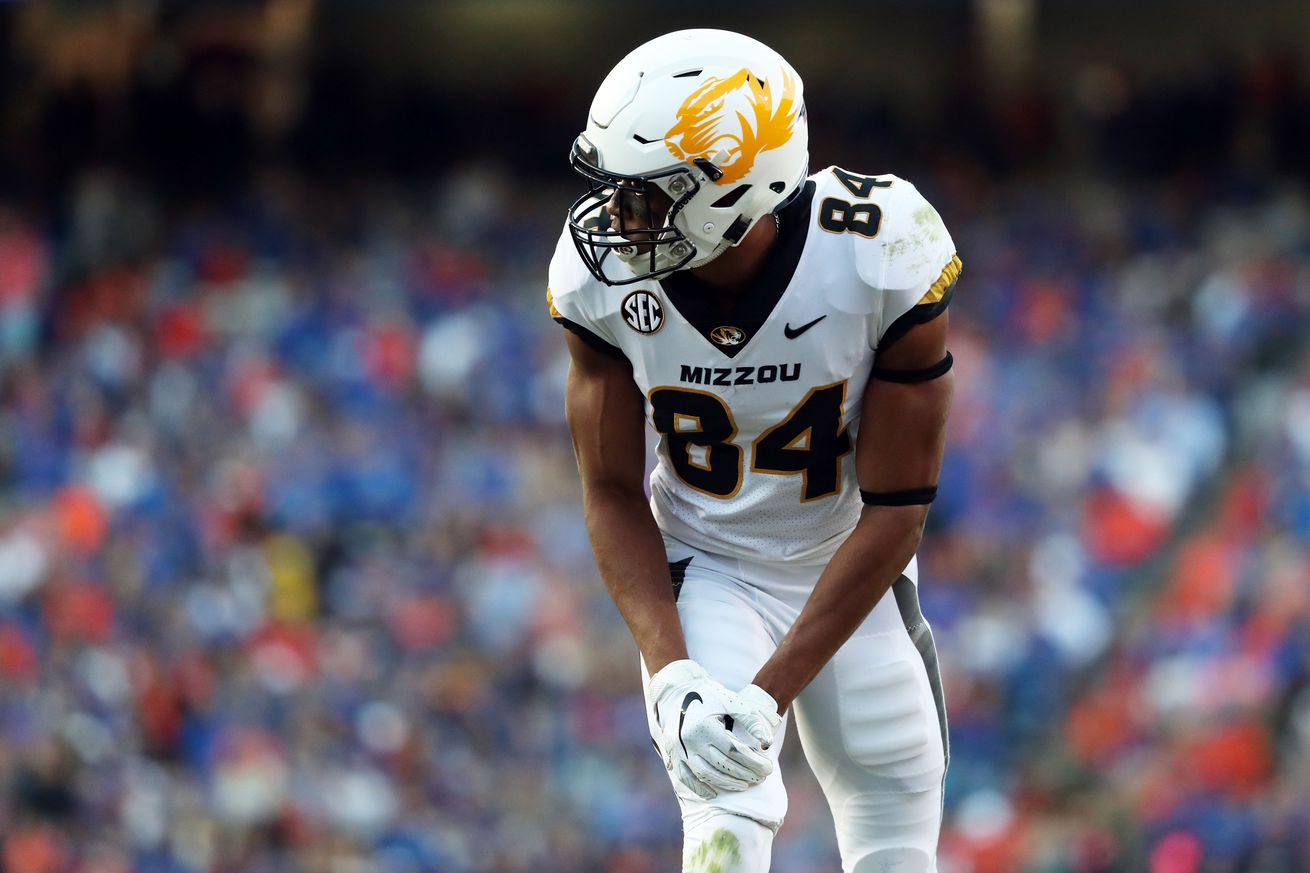 Emanuel Hall possesses elite speed and athleticism that makes him a high-upside player as a Cowboys draft prospect.

How big of a priority is wide receiver heading into next week’s draft? That is a question that has yet to be answered, but the Cowboys did address the position through free agency by inking a deal with Randall Cobb as well as keeping Allen Hurns.

Still, adding another weapon to Dak Prescott’s arsenal does not seem like a bad idea. After all, it is clear that the franchise is committed to number 4, so why not strengthen his pass catching corps? Amari Cooper looks like a bonafide WR1 and Michael Gallup is on the rise, but it would be intriguing to add another talent through the draft.

One target that appears to be at least somewhat on the Cowboys’ radar is Missouri standout Emanuel Hall, as Dallas used one of its 30 pre-draft visits on the Tennessee native.

Hall’s broad jump was the second best in NFL Combine history — only behind current Dallas Cowboys defensive back Byron Jones.

Naturally, these numbers caught the eyes of many scouts and decision-makers. Hall, the teammate of likely first-round quarterback Drew Lock, spent four seasons in the Show-Me State. Despite never eclipsing the 1,000-yard mark during his career in black and gold, Hall became a big touchdown threat for Lock during his last two seasons: grabbing a total of 14 scores over the 2017 and 2018 seasons.

Hall’s final two seasons in Columbia were his most productive, as the Nashville product recorded 1,645 receiving yards on 70 catches in addition to his 14 touchdown receptions. Furthermore, the athletic target averaged over 23 yards per grab during his final two years with the Tigers, proving that he can stretch the field and move the chains.

On my 4th game of Emanuel Hall. Has impressed me in every one. Love how varied his releases are. How about this swim to get on top of the corner and then the finish? pic.twitter.com/t6Ma7j1ShJ

Emanuel Hall reaped the rewards of playing in the Missouri air-raid system, consistently proving that he has the ability to take the top off a defense with his elite vertical speed and athleticism. Although Hall generally only lined up on one side of the field in Barry Odom’s scheme, he is the kind of receiver that can be used in different areas of the field due to his unique skill-set.

Dane Brugler gives Hall a fourth-round grade, thanks in large part to some injury concerns that prevented the talented wideout from playing a full season in any of his four years with Mizzou. On the field, though, Hall is a highly talented prospect in a quality class of receivers. His unique traits give him a high ceiling on the professional level if he is able to stay on the field.

The NFL has evolved into a league in which offenses have to keep pace and put points on the scoreboard. The Cowboys are a run-first team, but it is key to have the ability to keep defenses from stacking the box and taking away Ezekiel Elliott. There was a clear shift in the offense when Amari Cooper was acquired midseason and the growth of Gallup will only help.

Prescott’s security blanket, Cole Beasley, departed for the cold weather in Buffalo, but Dallas did add a talented veteran in Randall Cobb. Cobb has battled injuries throughout his professional career, but has proven to be a reliable target when healthy. However, the Cowboys only inked the former Kentucky Wildcats star to a one-year deal meaning that the team still needs to look for talent long-term.

Hall would give the Dallas Cowboys a wide receiver that possesses both size and speed and the ability to separate from defensive backs. On paper, Hall is a Day 2 talent with a lot of upside, but a history of injuries and drops could push him further down draft boards.

The Missouri product would be a bargain in the third or fourth round and have a chance to be an impact player for Dak Prescott.

Emanuel Hall has some of the best vertical releases of any wideout in this class. Legit sub 4.4 guy who is as fluid as they come. You don’t find 6’3 pass-catchers like him on trees. Continues to be criminally underrated. pic.twitter.com/BQ7lKhaw1g