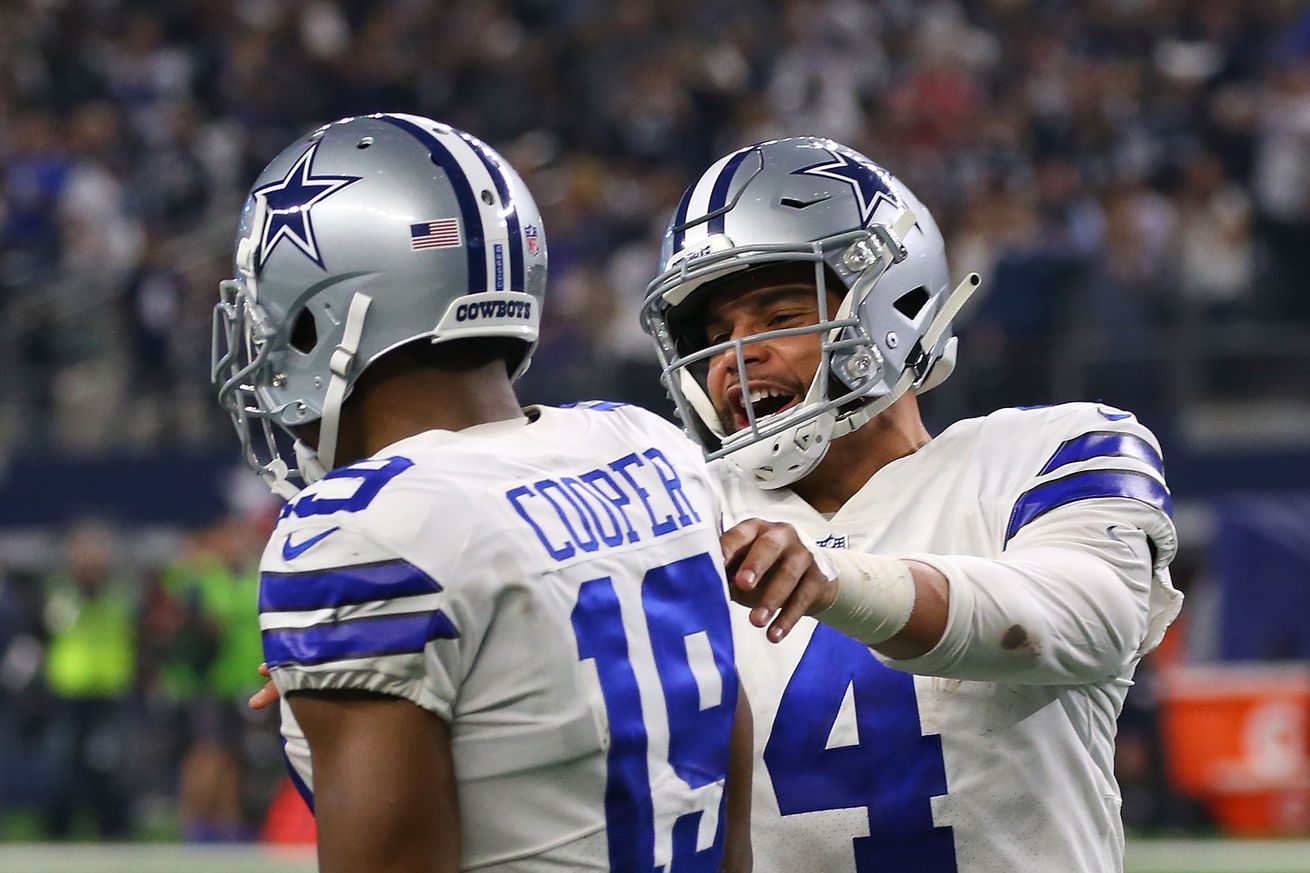 On Tuesday, Russell Wilson struck a huge deal with the Seahawks to make him the NFL’s highest paid player. With the pressure mounting for Dallas to get an extension done with Dak Prescott, Stephen Jones hinted that they’re already in that process.

“Pretty much everybody’s on it pretty good that there’s some pretty active discussions now with Dak and Amari,” Jones said. “But it doesn’t mean that some can’t pick up in short order with other players that we have on our roster that we certainly want to keep here in Dallas.”

“You’re talking about two guys there between Rodgers and between Russell Wilson that have won Super Bowls, that have had success year in and year out, taking their teams to the playoffs,” Jones said. “Those are guys who are going to make those type of jumps. But I’m not concerned.

”I think at the end of the day, if there’s any position that has to keep an eye out not only for themselves, but they also have to keep an eye out on their team in terms of how much [salary] cap space they take up, these quarterbacks are those guys. At the end of the day, they’re going to make a lot of money. The bigger thing for them in terms of their career and what they’re all about is how much did they win, how many Super Bowl rings do they have on their fingers? Those are all huge deals. They know at some point if they take out too much cap space at the end of the day it could hurt their chances in terms of winning.”

When it comes to signing players to contract extensions, it’s all about the market. With the salary cap rising every year and a new “highest paid player” seemingly every other month in the offseason, the most recently signed deal sets the market for the next one. So what has Russell Wilson’s contract done for Dak Prescott’s next contract?

Contract values are determined much more by the market than anything else. If you don’t believe that, consider the fact that the NFL’s highest average salary has been set eight different times in the last three years. All eight of those records were set by quarterbacks, and not all of them have accomplished as much as Dak Prescott – looking at you Derek Carr, Jimmy Garoppolo and Kirk Cousins.

The point being: the sooner you simply accept that Dak is going to get PAID, in capital letters, the easier this will all be.

Now, what will it look like? That’s harder to say. Ironically, I went to sleep on Monday night planning to write a column about how good it would be for the Cowboys if the Seahawks were unable to get Wilson signed this offseason.

That dream is dead now, and instead the Cowboys will have to negotiate in a world where Wilson is making an average of $35 million per season during the life of his extension.

The first thought that many had when Russell Wilson’s contract extension was announced revolved around how much more the Cowboys will have to pay Dak Prescott. That makes sense for a lot of reasons, but simply backing up the money truck to Dak’s house isn’t necessarily the only option Dallas has.

Hanging over these discussions is the potential use of the franchise tag. The Cowboys used it on Lawrence twice, but have never used the franchise tag on a quarterback. In the past, they were able to get deals done with Troy Aikman and Tony Romo without needing to use the tag.

If the Cowboys go down this road with Prescott, they could be setting up a Kirk Cousins-like departure in 2022. It’s a risky proposition, but one that could pay Prescott about $60 million in 2020 and 2021.

By going the tag route, the Cowboys would almost be placing an expiration date on their relationship with Prescott. Theoretically, they could tag Prescott a third straight year in 2022 at more than $45 million or use the transition tag. As much as the cap continues to rise each year, relying on any tag could majorly hamstring the Cowboys.

Travis Frederick missed all of the 2018 season but the prevailing hope going into the offseason was that the All Pro center would be able to return to the field in 2019. When Dallas took the field on Monday for their first session of optional workouts, Frederick was not only present but he was participating in the workouts.

“It’s just great to have him working out again. Last year, I think it was well-documented, he did a great job of being kind of another coach,” guard Zack Martin told the team’s official website. “But to see him back out there working out, you can definitely see a little bounce in his step.”

“As much as he helped us last year, I know it was tough not being out there, just kind of doing the daily grind with all the guys that makes us so close,” Martin said. “It’s awesome having him back, and we’re excited to get him back out on the field.”

The Cowboys have been a bit more active in free agency this year than in years past, and they did a good job of filling several holes while also coming to terms on an extension for DeMarcus Lawrence. Now, Jerry and Stephen Jones look forward to checking the next box on their offseason to-do list.

“The draft, having a successful draft,” Cowboys chief operating officer Stephen Jones said last Tuesday. “If we can do that, then we can say we had a successful offseason.

“But as we said, it doesn’t mean we’re through. We’re always open-minded to improving our roster. I always like to say it’s 365 days a year you’re into player acquisitions, so we’ll continue to look for ways to improve. But obviously the last piece, our big priority, is to check the boxes to go out and have a successful draft now.”

“And we did know that we needed to shore up the defensive line, especially with the issues that we have with Randy and then also David Irving (not re-signed). We knew we needed some help there and would like to go into the draft having been able to think that we can pick the best player available and not get into really, even though you say you’re going to, thinking about what your needs are.”

The Cowboys already know which teams they will be facing in 2019 and where, but the most important part of that is when those games will be played. Facing several tough teams in a row or having a bye week too early can pose serious challenges for teams, but Dallas will find out the order of their schedule Wednesday night.

At home, the Cowboys will welcome mutliple teams from the NFC East, the NFC North, the AFC East and the NFC West champions.

The Cowboys signed veteran Randall Cobb to serve as their slot receiver and complement Amari Cooper and Michael Gallup in the passing game, but Dallas is still looking at some receivers they could take in the later portions of the draft who could grow into their slot receiver of the future.

Penny Hart is a name we haven’t heard much about over the last couple of months, but after jumping on the scene at the Senior Bowl, Hart deserves strong consideration on day three.

At about 5’8” and 180 pounds, Hart’s size and frame are clear question marks as he transitions to the NFL. Still, his shiftiness as a route runner and quick feet in open space make Hart an intriguing slot prospect in the 6th or 7th round.

Penny Hart would be a bit of a project for this coaching staff, but after signing Cobb in free agency and trading for Amari Cooper during the 2018 season, they can afford to draft-and-stash Penny Hart.