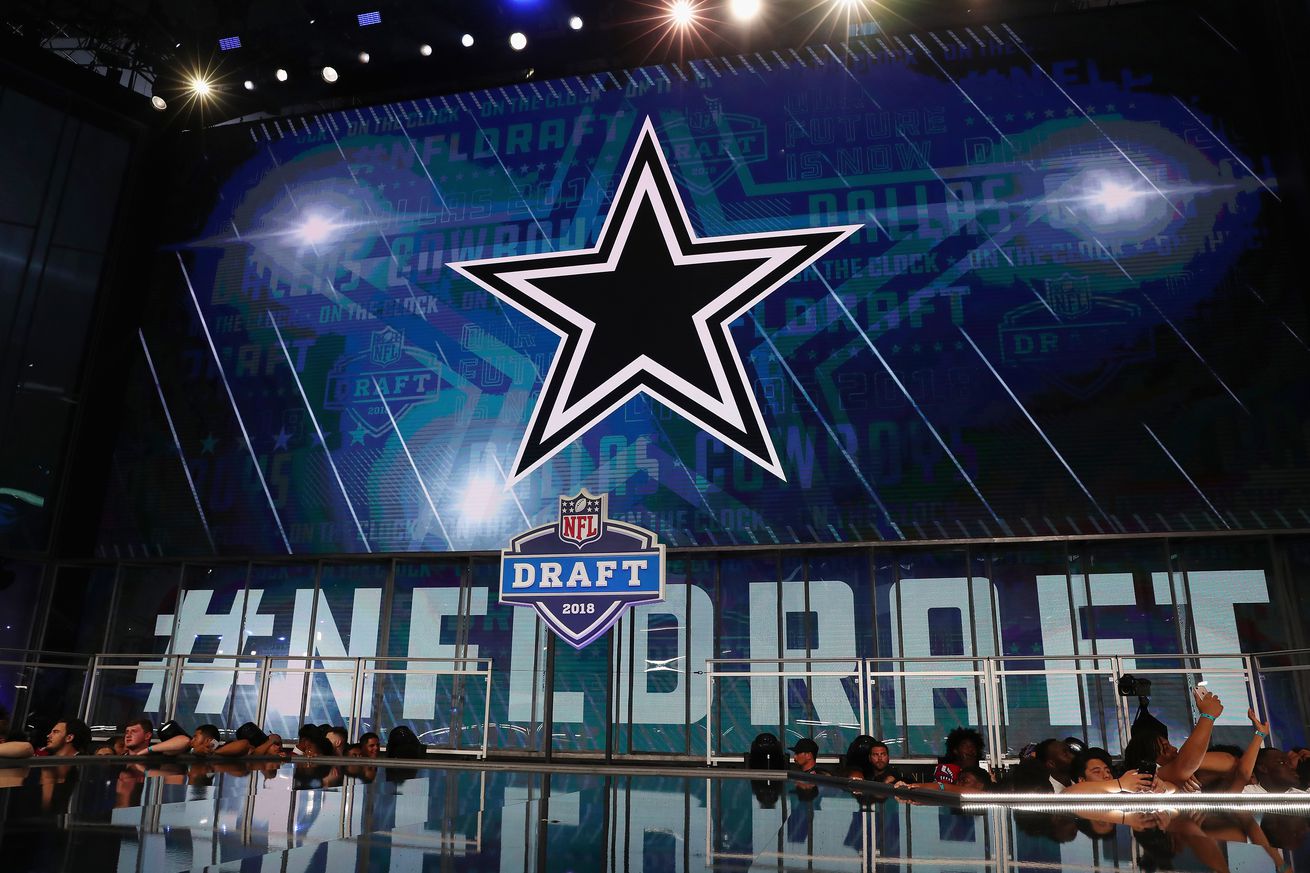 The brass talked about it, and options abound.

Stephen Jones dishes on Cowboys’ draft strategy in detail – Zeke Barrera, Cowboys Wire
Our own R.J. Ochoa covered the pre-draft presser in detail, but this is a worthwhile complement to that article, as it focuses on what Stephen Jones (the real power in personnel decisions) had to say.

How confident are you that you can keep drafting as you have been?

“I think if we stick our fundamentals we can. You want to get better every year. You certainly want to look at ways that you can improve, but I think obviously in this set of circumstances that we have . . . then I would like to hope that we can continue to have success . . . So, we’ve just got to really do our homework and really look at each and every player that might be available there. We know there’s probably — it will start to limit up pretty good as the draft comes to us there in the bottom of the second. But we’re convinced and convicted, even though we’re not through with it yet, that there is going to be good players for us.”

2019 NFL Draft: Three 2nd Round Dream Scenarios For The Dallas Cowboys ✭ Kevin Brady, Inside the Star
Safeties are all the rage in the run-up to the draft, so it isn’t surprising to see one listed as a best-case scenario for the Cowboys.

It’s no secret the Cowboys are looking to add a safety during this year’s draft, and Washington’s Taylor Rapp would be the answer to all of their dreams. Rapp is a very versatile player, able to play in coverage on the back-end and offer run support in the front seven as well.

Before his Pro Day, it seemed like most considered Taylor Rapp a top two or three safety in this entire class. But after testing in a somewhat disappointing way, especially on the 40 yard dash, Rapp’s stock has taken a minor hit.

If this causes Rapp to fall to 58, where the Cowboys can draft him, they shouldn’t think twice about it. Taylor Rapp is going to be a good pro in the NFL for a long time, and would help the Cowboys’ defense immediately in multiple ways.

Gardner-Johnson played the “Star” role in the Gators defense in 2018, which is a hybrid of a slot corner, safety, and some linebacker. He was most often aligned as the slot defender to the wide side of the field against spread looks.

In coverage he is extremely sticky in man coverage, as his background as a corner shows up. He doesn’t give up much separation and is physical at the top of routes. He also is very comfortable in space whether in a underneath area in a true zone coverage, or in a pattern match or combination coverage in tandem with his teammates.

Cowboys Looking At Safety, With “BPA” Mindset – Rob Phillips and David Helman, DallasCowboys.com
This collection of nuggets is really worth your time to click and read fully. A highlight:

Stephen Jones said the safety position isn’t considered a major priority – the team did sign veteran George Iloka in free agency – but it can’t be ruled out if the Cowboys find value at some point on draft weekend. “Obviously we’ve looked at playmaking safeties and haven’t been able to get deals done,” Jones said. “If we see the right guy there at the right price and he does all the things as Jason mentioned – versatility’s a big part of it. If you find the right player at that position then it certainly warrants not only a high pick but it can warrant big contracts.”

Dallas Cowboys: Film room: Full Cowboys mock draft — what should Dallas do if top safety targets are wiped out in Round 2? | John Owning, SportsDay
Part of a good draft strategy is having contingency plans in place. Here is a great one for Dallas’ second round pick.

Many have already penciled in a safety here, but if Washington’s Taylor Rapp, Florida’s Chauncey Gardner-Johnson, Mississippi State’s Johnathan Abram and Virginia’s Juan Thornhill are already off the board — which is very possible — the Cowboys need to go in another direction.

That direction could be Zach Allen, who the Cowboys have shown some pre-draft interest in despite not inviting him to Dallas for a national visit.

Allen is one of the most productive defensive linemen in this class, posting at least 10 tackles for loss in three straight seasons at Boston College. He saved his most productive season as a pass rusher for last, finishing with 6.5 sacks, 18 QB hits and 31 pressures (all career highs) in 2018.

Listed at 6-foot-4, 281 pounds with 34 ¾-inch arms, Allen’s size and play style give him the versatility to play either defensive tackle or end.

3 better-late-than never Cowboys visitors prior to 2019 draft – K.D. Drummond, Cowboys Wire
The Cowboys are getting in some last-minute visits, including this one who gets high marks from an impeccable source.

Crosby fits the Cowboys’ physical profile for edge rushers, standing 6-foot-5 and weighing 255 pounds. He’s a very athletic kid, too, who had 18.5 sacks over the last two seasons. His combination of athleticism and production makes his an A quadrant prospect, one of just 9 in this year’s edge rusher draft class. Here’s Blogging The Boys’ excellent research on the matter.

What’s it like to be a Dallas Cowboys scout, and what’s the path into that world? – Calvin Watkins, The Athletic
We all know how important scouting is to having a successful draft. But we mostly don’t have that good an idea what really goes into it. This is a great look at how one Dallas scout, Drew Fabianich, goes about his job.

So what does Fabianich do when he makes a college visit?

He arrives early in the morning, talking with the head coach, position coaches and coordinators about the player he’s evaluating. He asks about a player’s work ethic, passion for football and ability to play at the next level. He asks about his best scheme fits, physicality and skills. In short, he covers everything he can.

At midday, he goes to the film room and watches the game tape. Fabianich attends games but can’t do much evaluation because, as he half-jokes, “you can’t rewind the tape.” Watching game tape allows him to focus on a specific player and see what he can do at a measured pace. After about an hour of watching film, Fabianich catches up on writing reports.

Once practice starts, Fabianich watches practice. It’s his first chance to eyeball a player. Is he a lanky 6-foot-5? Is he too small to pick up more weight? How does he interact with his teammates and coaches outside the view of broadcast cameras?.

If time permits, Fabianich meets the player face-to-face. With the visit over, Fabianich heads either to the hotel, airport or the next city.

“Everybody thinks it’s great and glamorous until they do it,” he said.

Connor Williams Adding Size and Strength Huge for Cowboys OL ✭ John Williams, Inside the Star
This is one of those overlooked aspects that could wind up being very important in 2019.

Stephen Jones praise is significant. The Dallas Cowboys feature three All-Pro offensive lineman. To say that “we’ll be talking about him just like we do several of the other players on our offensive line” is very high praise. There aren’t many teams in the NFL that boast as much talent along the offensive line as the Dallas Cowboys do in Tyron Smith, Zack Martin, and Travis Frederick. For Jones to think Williams cold be that level of player doesn’t sound like generic front office speak.

With a full year under his belt, including two playoff starts, Williams should be confident heading into his second year. Adding strength and weight will help him anchor better against the strong interiors he’ll face weekly in the NFL. Getting Center Travis Frederick back in the lineup will help him with the mental aspect of the game.

Dallas Cowboys: Dak Prescott deal needs to get done soon |Clarence Hill, Jr., Fort Worth Star-Telegram
Until Dak Prescott gets a new deal done with the Cowboys, we are going to be talking about it, and then will dissect it thoroughly. Here is some more info to keep in mind.

This is also not about whether Prescott is as good as Wilson and Rodgers or if he should be paid at their level. Their contracts have only increased the market for quarterbacks.

And more importantly for Prescott and Cowboys, it has increased the level of the franchise tag, which would be the ground floor of any respective contract extension.

If the Cowboys don’t get a deal with Prescott, they would be forced to place the franchise tag on him. As of now, that number is $30.8 million, based on the new money in Wilson’s deal.

Mailbag: Expectations For Robert Quinn, Dak? Bryan Broaddus and Rob Phillips, DallasCowboys.com
Since this is a hot topic, this answer seems worth keeping in mind.

I’m wondering how the Russell Wilson deal with Seattle will affect an extension with Dak? Is he going to want in the range of $30 million a year or do you think he would take less knowing he needs good players around him for him to be more successful and him taking less would give them a better chance to sign more of our own players? – MICHAEL SUTTON / SISSETON, SD

Bryan: Prescott is going to try and get all the money he can. It’s not the Cowboys’ fault that he was only a fourth-round selection, but he’s going to try and make up for that lost money for not being a high pick. The Cowboys know this and will have to figure it all out.

Shockingly, the Eagles complained about something that made no sense!

The Eagles get to play on a Thursday AND THEN GET TO PLAY ON A SUNDAY AFTER? WITH ALL THAT EXTRA REST? IT’S NOT FAIR IT’S UNFAIR WE HAVE TO CHANGE THE RULES! https://t.co/kH83edJbVq