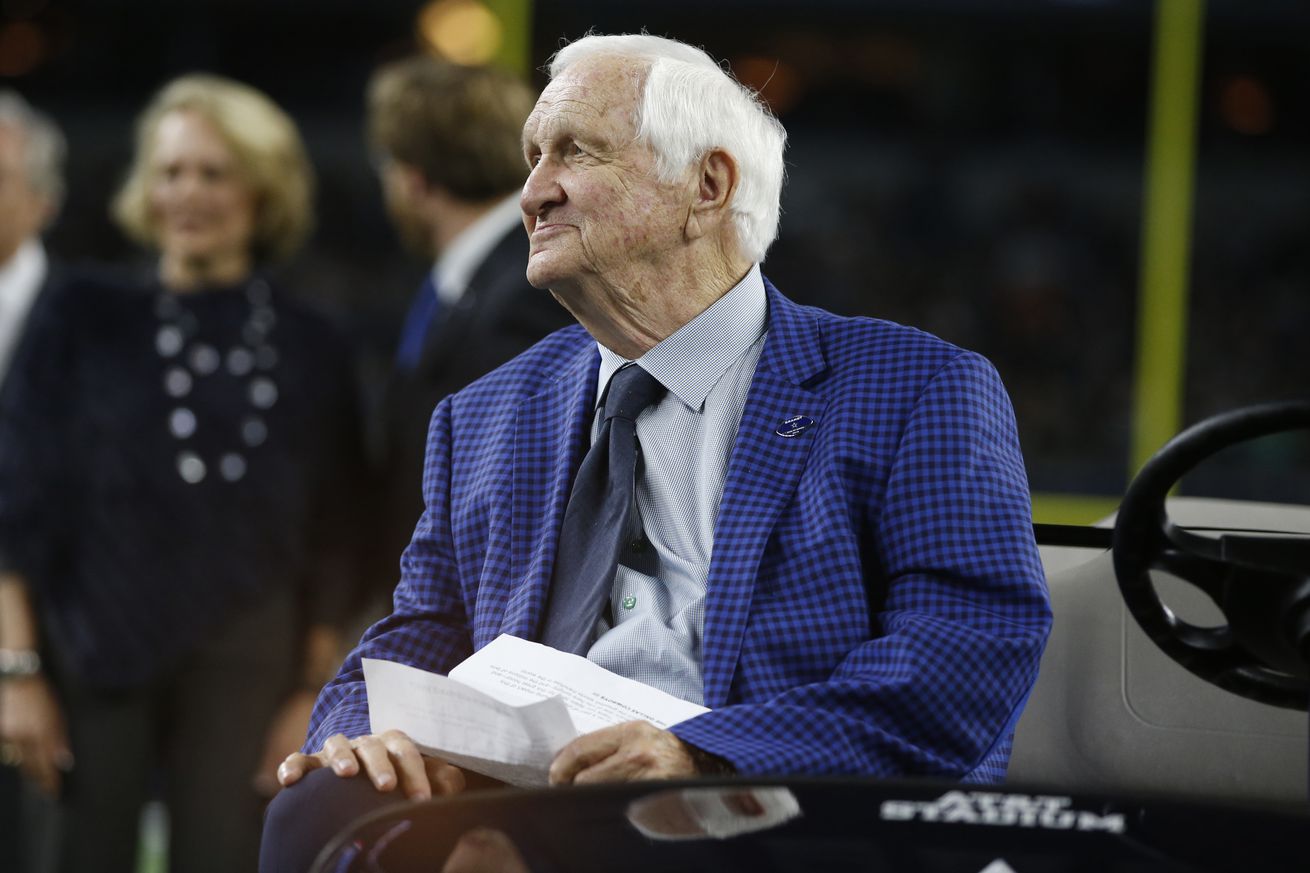 Gil Brandt says the Cowboys picked a good year to trade their first round pick with so much depth at positions they’re targeting.

Hall-Of-Fame Scout Gil Brandt believes Cowboys chose right draft to trade away 1st rounder- Jori Epstein- USA TODAY
Are the Cowboys missing out by not having a first-round pick? Maybe not.

Hall of Fame talent evaluator Gil Brandt said Wednesday roughly 17 prospects are sure first-rounders. The tier below them is deep.

“You’re going to find a whole bunch of players from about 17 to 70 that all look alike,” Brandt said. “So it’s an interesting draft and a draft that really benefits the Cowboys or teams that do their homework because it can really work out well.

“And if you’re looking for a safety, there are more safeties in this draft of quality than I’ve ever seen in my life.”

Finding the superior athlete: SPARQ safeties in the 2019 NFL Draft – One.Cool.Customer -Blogging The Boys
Which 2019 safety prospects are the most productive AND most athletic? O.C.C delivers the goods as he always does.

Overall, I’ll echo Gil Brandt’s sentiment that this is a deep class for safeties, especially considering that safeties tend to get picked relatively late in the draft, as they are usually undervalued relative to some of the more premier positions. While only three players show up in the A-quadrant, quite a few more are borderline A-quadrant players, narrowly failing to surpass one of the red lines in the graph. Keep in mind that these lines are somewhat arbitrarily drawn – while they represent the averages at the position, there is no hard data confirming that the threshold for NFL success is at exactly that point.

If you’re in the Juan Thornhill fanclub already, take this as further validation of your excellent scouting ability. If you weren’t yet, this is the time we welcome you to the Thornhill fanclub.

All signs indicate that the Cowboys will take a safety high this year. The question is whether they’ll go out and get their guy with their second-round pick, or whether they’ll wait until the third round and see which of the guys they like fall to them. In either case there’s likely going to be a very solid prospect waiting for them.

The Cowboys will likely be in the market for defensive back help, mainly at the safety position when they come to the podium on Friday night. The team’s most recent selection at that particular position came from the South with Xavier Woods as a sixth rounder out of Louisiana Tech.

The player who fits the trend is Juan Thornhill out of Virginia. He plays in the South and he would be a nice compliment to Woods. This group is well represented across the board even with the emphasis on the South, so don’t rule out the thought of Taylor Rapp out of Washington being the Cowboys’ first selection.

Examining Cowboys clues and five prospects linked to the team –Bob Sturm- The Athletic
The Cowboys don’t exclusively draft players that are among their 30 draft visitors but they tend to spend their highest picks on guys that visit first.

If you are unaware — and I highly doubt it, given that you are reading detailed draft profiles — each team is allowed 30 “official visits” to their facilities in the pre-draft buildup, in which they can spend additional time with each candidate. On top of that, they also look at local prospects on “Dallas Day,” and of course all of the chances to interact at other approved instances like the NFL Combine and collegiate Pro Days.

This gives us a chance to collect bread crumbs the Cowboys drop along their evaluation trail. Over the last several years, the Cowboys braintrust led by Will McClay and Stephen Jones have been said to lean toward players who visited their facility.

Edge Rusher Jaylon Ferguson is a no-brainer if available at 58th overall-Rob Phillips- Dallas Cowboys
The Cowboys have addressed the defensive end position ins several ways this offseason but you can’t pass up the opportunity if the draft presents it.

How He Could Help: Turn on the tape and you’ll see Ferguson can find the quarterback. He led the nation in sacks with a conference-record 17.5 last season and broke Terrell Suggs’ college record for career sacks with 45. The Cowboys made a big-time addition at defensive end by trading for veteran Robert Quinn a month ago. But Quinn is on a one-year deal, Randy Gregory is indefinitely suspended by the NFL, and DeMarcus Lawrence will spend the rest of the offseason working to return from shoulder surgery by the season opener. Ferguson would add insurance at the position and he projects as a potential starter long term.

13 players the Cowboys could realistically select in the 2nd Round & what each would add –Kevin Turner- The Athletic
Who are the Cowboys actually targeting for their first pick at 58 and which prospect will bring the most to the table?

I’ve believed for a long time now that Allen is the most likely Cowboys second-round pick. The versatile lineman fits Dallas’ preferences in a number of ways. He played a lot of defensive end at Boston College, with the occasional snap inside as a defensive tackle. My instinct is that Dallas would view him as a 3-technique defensive tackle who could also play some at defensive end. 2019 is a contract year for defensive tackle Maliek Collins, and Tyrone Crawford could be a cap casualty after the coming season. Crawford would be a 9.1m cap hit in 2020 and the Cowboys could save 8m in cap space by cutting him after the 2019 campaign. I’m not sure they want to do that, given he’s one of the team leaders, but it’s an option for them to consider after giving DeMarcus Lawrence a big contract, with deals for Amari Cooper and Dak Prescott likely.

What Allen lack in athleticism he makes up with effort, awareness and an advanced feel of how to beat the man in front of him. He plays with big, powerful hands, and it does appear he would translate nicely to the interior. He’s not going to be able to get the edge very often as a pass-rushing defensive end, but his ability to understand who he’s matched up against allows him to win. I don’t think he’s going to be a future Pro Bowler, but three years from now, we’d wind up saying, “Man, that ended up being a really solid pick.”

Cowboys looking to get backup RB for Ezekiel Elliott in this draft class – Kevin Patra-NFL.com
The Cowboys are in the market for a backup RB to Ezekiel Elliott but are they really planning to make it a draft day priority?

The past few seasons Rod Smith has been the primary backup to Elliott. Though the team liked the player, he did little to give the Cowboys a reason to take Zeke off the field. Smith remains a free agent making Elliott’s current backup Darius Jackson, who has six career rushing attempts.

Interestingly, if you click on the unofficial depth chart on the team’s official website, the Cowboys list no second-team RB. While that’s a fairly hollow observation on April 18, it highlights the point: Dallas must add a backup RB at some point.

”At the end of the day you worry about what you do if Zeke’s not 100 percent,” executive vice president Stephen Jones said Wednesday of adding a backup, via the Dallas Morning News. “You want to get him as many touches as you can, but it’s also a long season. We’re obviously going to be looking, whether we get it done in the draft or whether we get it done in free agency.”

Alabama RB Damien Harris could become key cog to Cowboys’ future contingency plan -Joey Ickes- CowboysWire
The Cowboys only brought in two running backs, Damien Harris is an awfully good one. It may be rich but this team is built to run.

Harris was a true complete tailback in the Crimson Tide’s offense. As a ball carrier he has a great combination of patience and explosiveness that adds up to a recipe for big runs.

He has very good lateral agility which allows him to side step defenders in the hole or make hard cutbacks in the zone run game. He showed the ability to defeat arm tackles and consistently falls forward to gain the extra yard or two that can be so important for a running game.

Executed both gap and zone runs with high levels of effectiveness, and is a smooth runner who has the ability to beat pursuit defenders to the edge.

Potential DT Prospects Dallas Cowboys Could Target in Each Round- Brian Martin- Inside The Star
As the Cowboys finalize their draft boards, you have to believe that defensive tackle is atop the list. Could Dexter Lawrence possibly be available?

Dexter Lawrence has a chance to sneak into the first-round, but could slide right into the Dallas Cowboys lap just as easily. He would be a no-brainer pick and take over as the starting one-technique from Day 1. He moves surprisingly well for a player his size and flashes dominant qualities as a run defender. He needs to improve his pass rushing repertoire, but the skills are there. He would immediately upgrade the defense and help keep the Cowboys young, talented linebackers clean to make plays all over the field.

Cowboys’ final six games will most likely determine if team can win back-to-back NFC East titles-Tim Cowlishaw- SportsDay
After reviewing the 2019 NFL schedule, the Cowboys will have another tough stretch in December to contend with.

If quarterback Dak Prescott has not received a new deal prior to mid-season, he can prove his value against the upper crust of salaried quarterbacks in between the Giants and Patriots games. The Cowboys will host Minnesota (Kirk Cousins checks in at $28 million per season) and visit Detroit (Matthew Stafford makes $27 million a year).

The Giants open the season at AT&T Stadium but, for once, it’s not a Sunday night game, just a 3:25 p.m. kickoff.

But it’s that run of games at the end against the Patriots, Rams, Bears and Eagles in a five-week stretch before the finale with Washington that is most likely to determine whether the Cowboys can go back to back with East titles for the first time this century.