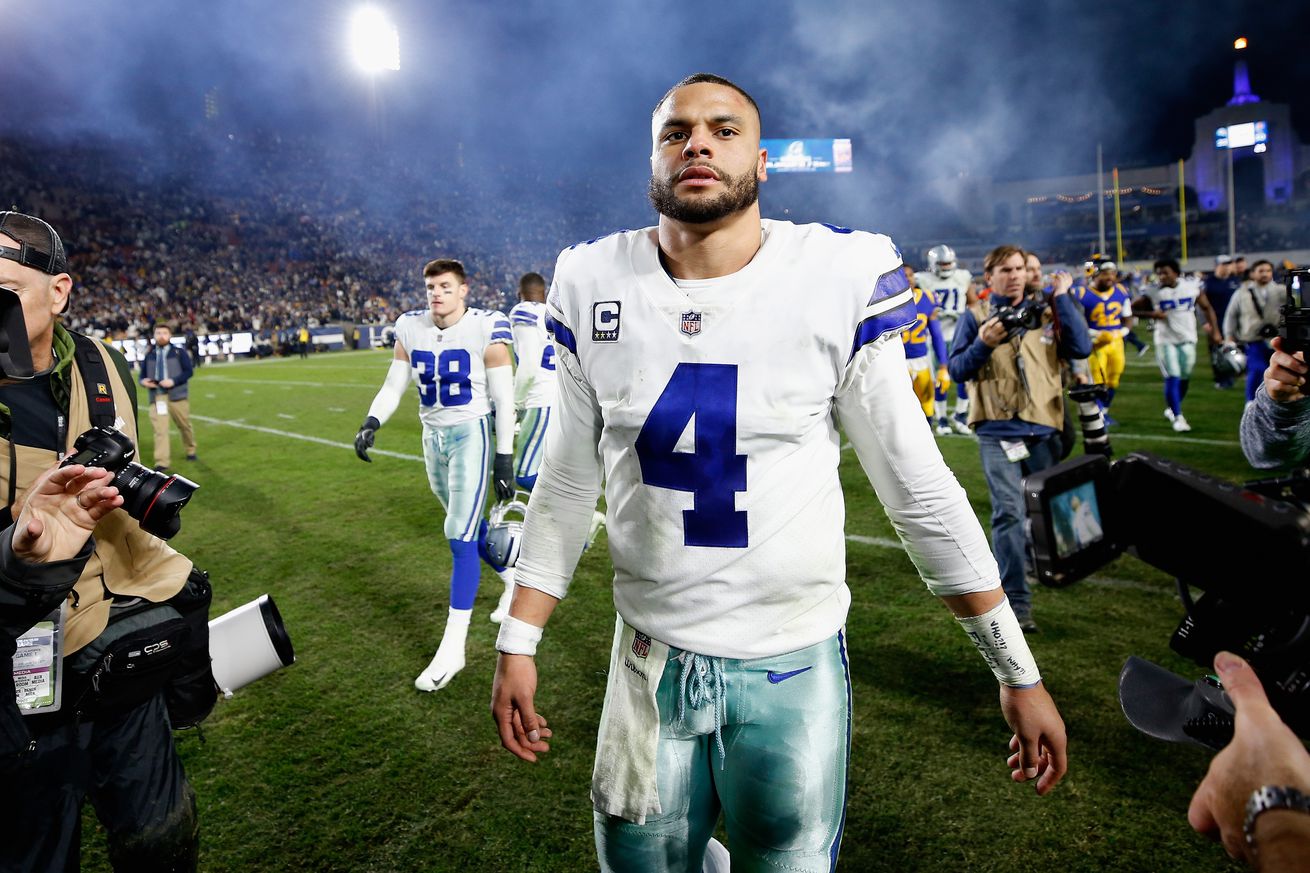 Which side will present the best case to “win the deal”?

That projection was made before the Seattle Seahawks made Russell Wilson the highest paid player in NFL history on a four-year extension worth $140 million, including $107 million in guarantees and a $65 million signing bonus, a market-setting deal that will have a direct impact on what happens with Prescott.

While Jones has continually praised his franchise QB, he’s also begun the predictable tactic of negotiating through the media, as he’s done with Lawrence and as NFL teams routinely do — the goal being to tilt leverage in their favor via fan pressure and news headlines. That’s why you’ll hear Jones project Prescott as the waiting king of the financial roster throne in Dallas, and not-so-accidentally frame it all as hopefully a “team-friendly” deal to come; all in the same breath without so much as batting an eye. It’s a masterful bit, really, when you consider the praise gives enough optimism to supposedly prevent Prescott — or any player they’re in negotiations with — from feeling slighted, while simultaneously positioning fans who don’t truly understand the salary cap as the team’s guard dogs that must protect the cap space at all costs.

What dollar figure would it take to make you reconsider signing Dak Prescott?

The Cowboys have publicly stated that Prescott’s contract needs must be team-friendly. The Seahawks just made that harder for Dallas to Prescott’s delight.

The contract negotiations between Prescott and the Cowboys have three interested parties. The team is intent on signing their quarterback at a cost that will allow the Front Office to build Super Bowl competitive teams.

The player is intent on maximizing his earnings while playing for a competitive team that one day might win the Super Bowl. The fans, the silent third-party watching these negotiations from the outside, only care about winning the Super Bowl.

It is with this perspective that I suggest the Cowboys wait to sign Dak Prescott. It is far better for Dallas to let Prescott earn his $2 million rookie deal salary and let his play far exceed the value of his contract and then use the franchise tag to protect their rights.

A little smack talk goes a long way. Dallas Cowboys defensive end DeMarcus Lawrence knows this, and his continued trolling of New York Giants quarterback Eli Manning is a delight to behold. Upon receiving a promotional get-well gift from Snickers, Lawrence, recovering from shoulder surgery, posted about it on Twitter and used it as chance to clown Manning.

”Just when I thought the new deal couldn’t get any sweeter,” he posted on Twitter, referencing the huge $105 million five-year contract he signed with the Cowboys at the start of the month. “Anyone know Eli’s address? I wanna send him some of these @SNICKERS. #ThankfulForHisContributions”

Early Guess At The 2019 Starters On Offense – DallasCowboys.com

Is it too early to start predicting the starting lineup for the Cowboys? Never! The mothership has us covered.

WR – Michael Gallup Gallup’s production actually picked up after Cooper’s arrival. He had 23 of his 33 total catches in those final nine games and clearly looked more comfortable in the offense. Last year’s third-round pick showed flashes as a dangerous deep threat and should only get better in his second season.

WR – Randall Cobb Listing Cobb as a starter here because the Cowboys figure to use the savvy veteran plenty as a slot replacement for Cole Beasley. Cobb is both electric and dependable with the ball in his hands – two great traits in a receiver. He should settle in quickly as a safety blanket for Prescott.

Film room: Here are the best- and worst-case scenarios for the Cowboys in Round 2 of the NFL draft – John Owning, SportsDay

John Owning gives us a look at the best and worst case scenario for the Cowboys second-round draft pick.

A 4.74 40 could lead to the Cowboys stealing an outstanding talent. If not for Rapp’s poor showing in the 40-yard dash, there was a chance he could sneak into the late first round.

The 40 time will scare teams off because it comes below the typical threshold (4.7) most use for safeties, but the times that are most applicable to the field are the three-cone and short-shuttle drills, in which he tested into the 79th and 92nd percentiles (respectively) among safeties since 2011, according to MockDraftable. These agility drills test one’s quickness, flexibility and change-of-direction ability, which are used much more frequently on the field than one’s ability to run 40 yards in a straight line.

On the field, Rapp truly is a difference-maker in the box. He is a true asset against the run, possessing linebacker-like qualities to go with a defensive back’s size and quickness.

State your case: who do you want to be Cowboys a week from today? – RJ Ochoa, Blogging the Boys

Who do you hope the Cowboys draft next Thursday? We’d love to hear from you!

All of that being said the Cowboys will likely add two new players next Friday. It will be an important day, arguably the most important of the offseason so far to some extent, for the franchise as these picks are going to be counted on to a strong degree in 2019.

There are a lot of ways that the Cowboys could go with their second- and third-round selections. General consensus seems to be that the two could wind up being some combination of a safety, defensive tackle, cornerback, and even running back.

IF you could call your shot, who do you want it to be? Which two players would help you sleep all the more easy a week from now?

Here’s a defensive heavy view of a Cowboys 7-round mock draft.

The Cowboys 2015 first-round pick moved from safety to corner in 2018 and thrived in his new role to start the season. However, he started to decline at years end which could be due to a hip issue. Dallas needs to be proactive though and look for a potential replacement in case his play continues to struggle, or if Jones’ contract demands become too much to handle.

That’s where Houston’s Isaiah Johnson, Jr. comes in. A former wide receiver, Johnson has the kind of length that passing game coordinator Kris Richard covets. He also has the ability to catch the ball, which is something the Dallas corners just can’t seem to do. Johnson is still learning the corner position which allows the Boys to get a high value here, as long as they can be patient with him.

Finding 58: Drafting A CB For The Future? – David Helman, DallasCowboys.com

Could the Cowboys go cornerback with their first pick in 2019 NFL draft?

Honors: Williams was named second-team All-SEC by both the media and the league’s coaches in 2018.

Scouting Report: The first thing you notice is the long, rangy build. Williams also has good reactions. He can deny the ball with his length. He runs well for his size, but there are times where you see people separate from him. This is a guy you could draft to develop, as his technique needs to be better. He’s not afraid of contact. He will attack the blocker to make a tackle, and he can be a physical tackler. He’s a smart player and will go for the strip. He’s not afraid to stick his nose in the action. There will be questions about his timed speed. You do see separation at times in routes. His ability to beat receivers up is a strength. – Bryan Broaddus

COWBOYS LOOK TO BE IN FOR BRUTAL DECEMBER SLATE IN 2019 – Kevin Brady, Inside the Star

A look at a tough stretch of games for the Cowboys.

The NFL released the official schedule for the 2019 NFL season earlier this week, with the Cowboys getting some favorable (and some not-so-favorable) draws. What jumped off the page immediately to me, however, is how tough their final four games will be. And, of course, how critical victories in those games will be to gaining an NFC playoff spot.

Among those four December games are trips to Chicago and Philadelphia, two playoff teams a year ago who present problems in different ways. The Bears, known for their talented defense and innovative play-caller, and the Eagles, the always tough divisional foe.

Dallas also gets two home games during this stretch, hosting the Los Angeles Rams week 15, and finishing out the year against the Washington Redskins. The Rams, of course, eliminated the Cowboys from the postseason a year ago, and are expected to be one of the conference’s best again.

The Cowboys will face a first-place schedule in 2019, and will have to prove that they are playoff-worthy down the stretch in December.