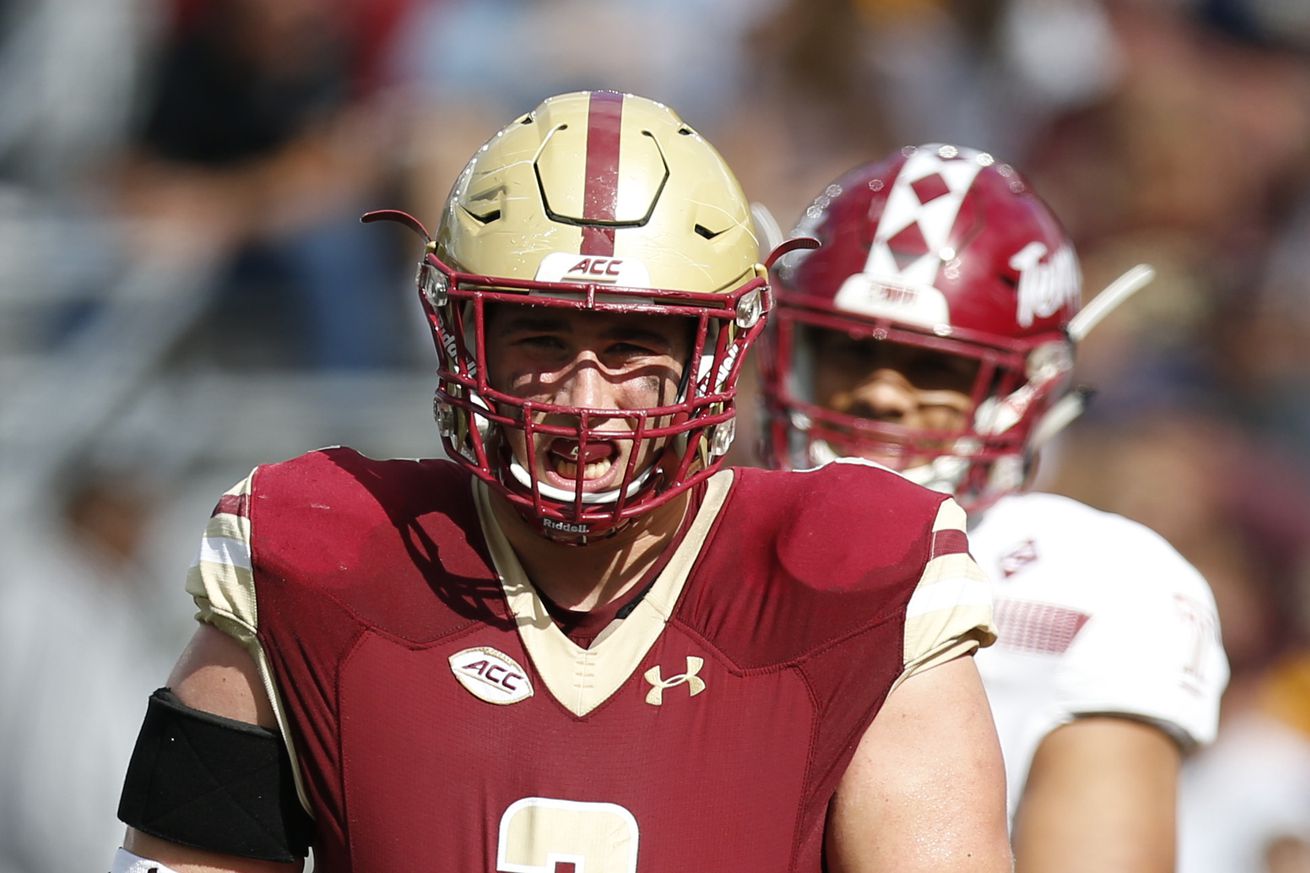 The Cowboys are sitting in good shape at defensive end, but that doesn’t mean they won’t take one in the upcoming draft.

The Dallas Cowboys recently signed their star pass rusher DeMarcus Lawrence to a lucrative five-year deal. The team also traded for veteran edge rusher Robert Quinn. On top of all that, the team has several young pass rusher prospects like Randy Gregory, Taco Charlton, and Dorance Armstrong on their roster that they are hoping will be a part of their future. On the surface, it doesn’t appear as if the Cowboys need a defensive end, but things can change in a hurry.

Regardless of the condition of the Cowboys defensive end position group, the team has taken an edge rusher in each of the last five drafts. In the spirit of collecting talent, defensive ends are very much on the table in the upcoming draft, but which players are the Cowboys likely to show interest in? And what rounds are they likely to be drafted? Here are six defensive ends that could hear their name called when the Cowboys are on the clock.

You’d think that college football’s all-time sack leader would generate a lot more buzz entering the draft, but despite his 45 career sacks Ferguson just isn’t the prototype edge rusher most teams are looking for. He doesn’t have the build as he’s a little on the thick side, his bend is terrible, and he just doesn’t offer much athleticism.

He gets off the snap okay, but isn’t twitched up like Rod Marinelli prefers. Despite all that, the Louisiana Tech defensive end has four years of outstanding production and it’s hard to argue with results.

While the physical traits are lacking, Ferguson makes up for it with the mental ones. He relies on his instincts and lateral quickness to get past blockers. He’s got violent hands and uses them extremely well. His long arms and power to push-pull and snatch allows him to have his way with blockers.

He’s very perceptive as to what the offensive linemen give him and knows how to attack their weaknesses. Ferguson is very solid against the run as he sticks with his assignments and uses his long arms to bring down ball carriers.

Ferguson doesn’t have the high ceiling of an elite edge rusher, but possesses the ability to be a solid fixture along the defensive line at the NFL level. Would that be enough to justify using the 58th overall pick on him?

The Eagles defensive linemen is another trench warrior that could fall through the cracks of the draft. He doesn’t have the explosiveness you’d expect from most edge rushers, nor does he have the play strength to anchor down and defend interior gaps. His athleticism is good, but not great and he doesn’t offer great pass rushing appeal, only recording 16.5 sacks his entire four-year college career. That’s one less than Ferguson had last season alone.

But with Allen, you’re not getting a sack master; you’re getting a high energy football player who has the propensity to make impact plays. In 2017, he racked up an impressive 100 total tackles. Allen is highly instinctive and knows how to work around blockers. He’s just a guy that finds a way to make plays, whether it’s batting down passes or blocking kicks.

The amount of hustle he displays makes him a consistent finisher. While he doesn’t look like he can be great at any one thing, he possesses a wide range of attributes that allows him to play both inside and out. Something tells me he’ll find his niche in the NFL and that could lead to one heck of a defensive linemen.

The Florida star edge rusher is an interesting prospect. On tape, he’s a late first-round talent even with such a deep class of pass rushers. But upstairs, he brings with him all kinds of concerns that will inevitably hurt his draft stock. Where he falls will depend on just how badly his off field indiscretions play with NFL teams.

Polite has all the athletic traits you look for in an edge rusher. He can bend, he’s got excellent get-off, and he’s got an assortment of pass rushing moves. He’s got great burst to get after his opponent and displays excellent chase-down speed.

While he has no weaknesses as a pass rusher, he offers up very little against the run, which takes him out of the running as a three-down player.

The biggest concern with Polite is his character. Buzz about bad combine interviews and unimpressive workouts have generated some red flags. After the enigma of David Irving that saw an amazing talent fall to the wayside because of his immaturity, you’d have to believe it would take a considerable slide before the Cowboys would be willing to roll the dice with Polite.

Texas Christian’s L.J. Collier is another prospect that doesn’t wow anyone athletically, but constantly shows up on tape. His frame and lack of pass-rushing prowess makes him a questionable piece on the edge and at the same time he doesn’t have the size to withstand the every-play pounding of the inside. So, where does that leave Collier exactly?

Collier is a tough guy who plays with a lot of aggression. He’s a clever pass rusher who always has a plan off attack and can sniff out weakness of his opponents. He is slow off the snap, but has a sudden burst that can get his blockers off balance, allowing him to bull rush right through them. Collier has active hands and strikes well, but his placement isn’t always where it needs to be. While he had a strong senior year, he only has one full season as a starter, but he could be on the rise. He had a good showing at the senior bowl and with the right coaching, he could offer up some nice upside.

Last year, the Cowboys were extremely excited when Dorance Armstrong was available in the fourth round as he was a nice development project they could put in their back pocket. A similar thing could happen this year if Eastern Michigan’s Maxx Crosby is still on the board when the team picks in Day 3.

Crosby is an athletic specimen, finishing in the 90th percentile in every single one of the running and jumping categories at the combine. He’s a finesse pass rusher who has plenty of tape showing him winning. He’s got long strides to sneak around the edge and does a great job swiping at blockers. Crosby doesn’t have very good bend and often time plays too upright, allowing him to lose the leverage battle.

His tackling leaves something to be desired as he has small hands without much strength to wrap up his opponents. It’s hard not lot like the potential he brings, but he’s going to need to add some bulk and strength to be an effective player in the NFL.

In continuing with the theme of non-prototypical defensive ends, Cominsky is one of those conundrums that begs the question… where will he fit in the NFL? He’s not an elite pass-rusher, he plays too upright, and he hasn’t figured out how to use the tools he has to be a consistent presence on the defensive line. Despite all of that, he shows a lot of positive things on tape that make him an interesting late-round option.

Cominsky doesn’t have great get-off, but he’s relentless. The guy does everything he can to max out his potential. He put on over 70 pounds during his college tenure to get to 285. He’s an aggressive player and can make an impact in run support. Coming from a small school, his body of work comes from inferior competition, so it’s a little tougher to gauge just how good he is. Cominsky is an appealing development project the Cowboys should be able to land on Day 3 and they would have plenty of time to figure out where he would be the best feet.