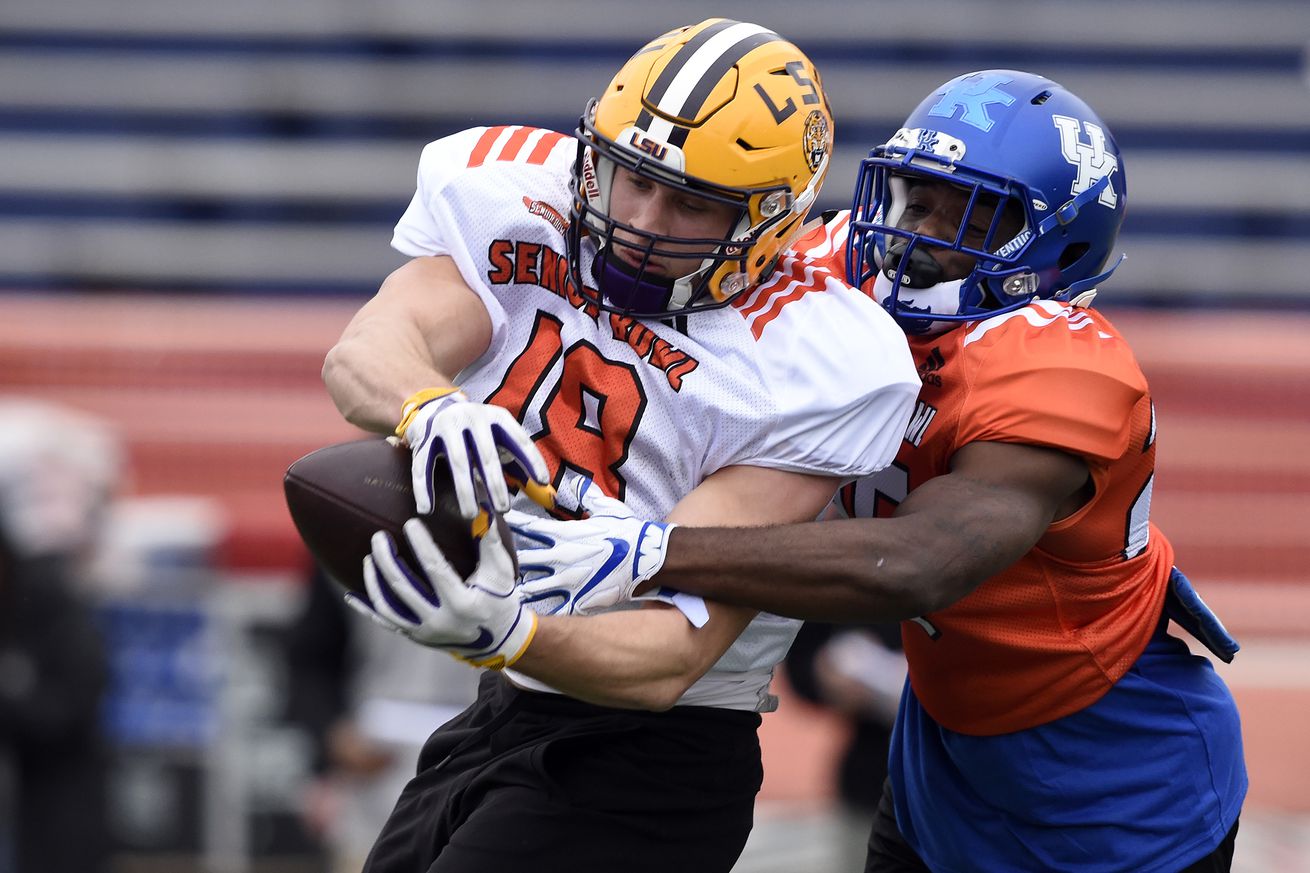 The Cowboys’ front office has to be pleased with how guys like Blake Jarwin and Dalton Schultz started to perform at the end of last season. With the team bringing back Jason Witten, though it is a short-term move, it’s hard to envision the Cowboys spending a premium pick on the position. There might be tight ends they like in this class like a Jace Sternberger but we’re not hearing much in the way of the Cowboys loving any of the tight end prospects.

The Cowboys will likely address the position, but with Witten and the other two guys, it’s a position that they will likely wait on. But that doesn’t mean that they can find value at tight end in the later rounds. In fact, the Cowboys might be able to find some prospects with solid traits with their compensatory selection in the fourth round.

(Here is a chart of 12 tight ends entering this year’s draft with various round projections. We’ll include all pre-draft visitors. All rankings are based off of Dane Brugler’s prospect rankings at the Athletic.)

When looking for guys that might be available in that late fourth-fifth round range, there were several interesting candidates.

Kaden Smith is certainly a player worth developing as he projects well as a future starting tight end in the NFL. Smith stepped into the role left empty by Dalton Schultz and almost doubled his production in far fewer games played. Smith has a ton of potential and is a smooth athlete but he will need a patient coaching staff willing to develop him. The Cowboys tend to shy away from guys that need so much work in blocking technique but Smith could be an exception. He’s definitely going to set himself a part from a pass-catching standpoint compared to other late-round prospects.

Drew Sample is the guy on this list that the Cowboys are most likely to draft because of his makeup. He’s a pretty skilled blocker that does a really nice job of sealing off edge rushers, with the NFL-level size for the position. Sample is a very high character-guy with the ability to see a quarterback in need and give him a security blanket. He possesses really nice hands and can be trusted not to drop the ball but he’s still very underdeveloped as a pass-catcher. His footwork and route tree need developing at the next level. Though he’s not really top-notch in any one category, he’s got a good balanced skill-set that fits within the Cowboys scheme.

Foster Moreau would likely be another guy the Cowboys front office would appreciate for his work-ethic and leadership qualities. His football acumen and character are off the charts and he will always keep working to improve his game. As a blocker, few in this class finish as well as Moreau. He doesn’t have the catch-radius you would expect from a guy with his length but he does have very reliable hands. Moreau will need work in understanding and being decisive with his routes. Overall, he’s got the tools and athleticism to be a productive contributor in an NFL offense.

Alize Mack will show up as an incredible athletic specimen on tape with tremendous upside as a potential mismatch threat in the NFL. He’s clearly one of the best playmakers at the position with incredible work done after the catch. The issue with Mack will always be his character concerns, he’s not the easiest guy to coach and was suspended by his coaches before. Mack has a really high ceiling but his blocking abilities are a mess and he will have to show the willingness to improve in that area before he will crack a starting lineup.

Isaac Nauta will check all your boxes in terms of blocking abilities and he has a very well-rounded skill-set for the position. He’s not an elite pass-catcher but he’s a natural plucker when the ball comes his way with good timing on adjustments. He still has a ways to go in improving his technique, consistency, and learning how to sell his routes. Nauta doesn’t show up very often in the red-zone and his athleticism leaves more to be desired. Still, he does a great job in pass protection and can contribute early as a lead blocker too.