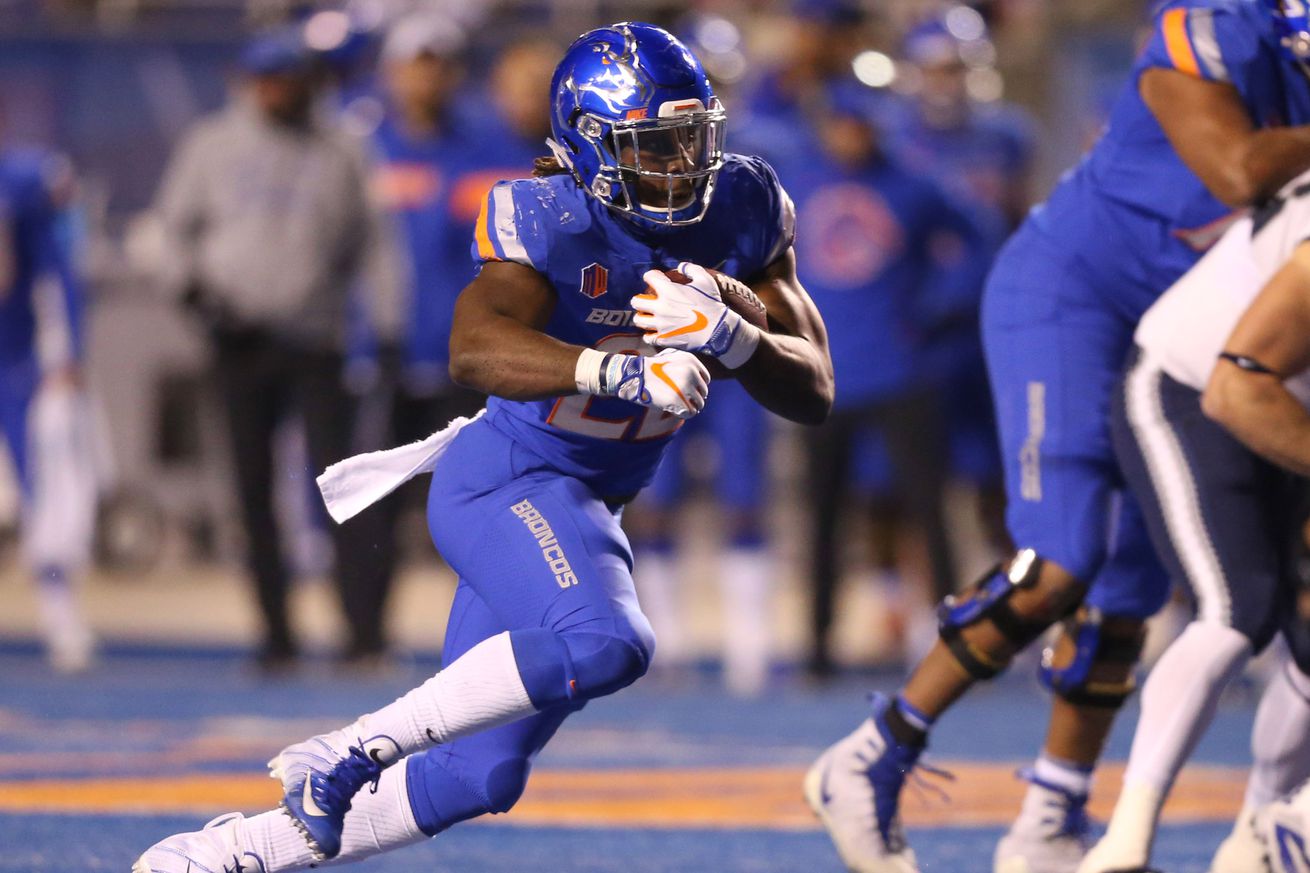 Could the Cowboys tap the Boise State pipeline yet again?

It’s no secret by now that the Cowboys love taking players from Boise State. There are six players currently on the roster that played college football for the Broncos, and there have been plenty more that the team has at least expressed interest in. In the team’s search for a backup running back for Ezekiel Elliott, they might go back to the pipeline and look at Alexander Mattison.

Mattison seems to be an all-around running back. Unlike the strength of Damien Harris or the agility of Darrell Henderson, Mattison doesn’t have any one single trait that is his calling card. He’s just a darn good football player.

The first thing that sticks out when watching Mattison play is his balance. He can cut or juke or even hurdle (see the below video, where he does all three) and come down on his feet and immediately transition back into his run. More than that, Mattison is able to shrug off a lot tackles with his balance.

– Break a tackle
– Juke a man
– Hurdle a defender
Alexander Mattison did it ALL on this touchdown. pic.twitter.com/JCyc0VeBRu

Mattison is also really good at waiting for holes to open up behind the offensive line and then hitting those holes. Boise State ran a lot of zone running concepts and Mattison excelled in those kinds of plays. Going along with his balance, he does a good job of keeping a steady stride and bounce when looking for the hole, and his excellent vision allows him to make the right cut more often than not. The one weakness here is that on plays where Mattison is forced to cut back to the other side of the field at the line of scrimmage, he can be a bit slow in that change and this is where he most often got brought down for a loss of yards.

However, Mattison makes enough positive plays to more than make up for the negative ones. And he’s shown that he can carry a heavy load, with 212 carries in his sophomore year and 302 in his junior year. Both of those seasons saw him break 1,000 rushing yards and post double-digit touchdowns. He has the ability to be the workhorse running back that a lot of teams look for, and his lack of injuries is even more impressive considering the heavy workload.

Out of all the running backs I’ve looked at this draft season, Mattison is by far the best pass blocker, which goes back to my earlier point about him being an all-around back. When asked to block in pass protection, Mattison takes good angles with his feet and isn’t afraid to step into blocks. He also uses every inch of his sturdy frame to anchor against defenders and not give up any leverage. Obviously, he’s not going to be able to hold off defensive tackles or more powerful edge rushers, but Mattison is good enough and smart enough blocking that he can buy his quarterback some extra time.

Mattison wasn’t used too much in the passing game at Boise State, and he saw most of his usage there in the form of screens or check down passes. Still, he was effective in that role, catching the majority of passes thrown his way and averaging 8.5 yards per catch in his three year career. There might be some potential for an NFL team to expand his usage there, given his sure hands.

Mattison should go earlier than he will; he has a couple of knocks on him. He doesn’t have the break-away gear of a home-run hitter. Also, as a player from Boise State there is concern over a lower level of competition. Or at least a perceived low level of competition. Playing in the Mountain West Conference doesn’t have the same allure as the SEC or ACC, but that hasn’t stopped the Cowboys from taking numerous Boise State players. Not to mention that Michael Gallup played in the MWC at Colorado State, and he’s quickly become their number two wide receiver. Additionally, Mattison doesn’t have the break away gear of a home-run hitter,

It’s hard to project where Mattison might go in the draft. Personally, I’d value him in the third or early fourth round, and some team might be sold enough to take him there. At the same time, though, Mattison could fall to the fifth or sixth round, where some team will get extremely lucky. Either way, he’s definitely in the Cowboys range and would match the criteria of a complete running back that they tend to look for.