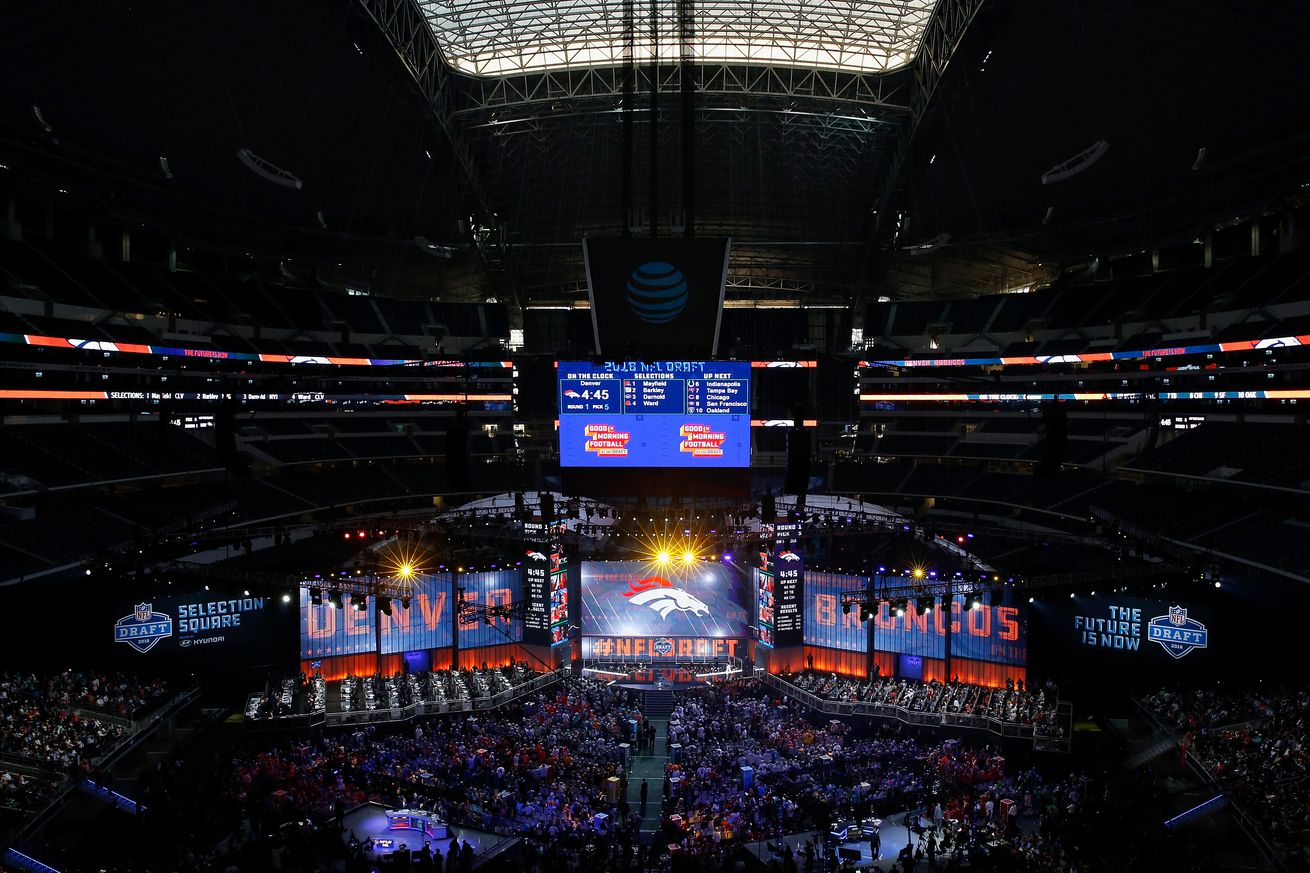 Who do the Cowboys have their eyes on heading into draft week?

Cowboys Draft: S Armani Hooker Worth a Look in 2nd Round – Mauricio Rodriguez, Inside The Star

The Cowboys need a safety. Could Armani Hooker be the pick in the second round?

Amani Hooker was a two year starter in college and was named the Big Ten Defensive Back of the Year in 2018, his junior season. Hooker is a very intelligent player, constantly displaying his high football IQ and his great instincts to get in position to make a play. Often, he’s quick to read the opponent’s play and makes up for his lack of athleticism by avoiding to take false steps. Dane Brugler from The Athletic actually posed an interesting question on the subject the other day on Twitter:

The Iowa product has a lot to improve on in man to man coverage, where he struggled at times. He also isn’t a player you’d like to start as a single-high safety, he lacks the range to do so.

However, he could be a starter right away as a strong safety, which is precisely what the Cowboys should be looking for. Hooker is a pretty good tackler and constantly takes good angles when pursuing the ball carrier. He has experience as a free and strong safety and has even played as an undersized SAM linebacker. Not to mention, he’s only 20 years old, which makes his upside all the more valuable.

Sturm gives five prospects that could get the phone call from Jerry Jones at some point during the draft.

Our last name wasn’t a Cowboys visitor at all, but the more we look at their possibilities on Day 2 and their desire to find a “step-in” starter with that pick, the more I want to include some of the names linked to Dallas by common sense. Wren’s profile is complex, given his 3-4 nose tackle experience at Arizona State, but the Cowboys seem to like him.

Overall: He is an older prospect and a complete projection from a 2-gapping scheme, so I am hesitant to suggest that the Cowboys have tremendous interest. That said, the clues have been there to see and therefore we must be open to the idea they are willing to invest in a 1-technique if the price is right. I’d give him a THIRD-FOURTH ROUND grade and try to snag him late Friday or early Saturday if he falls. I don’t see enough utility to go much richer than that.

13 players the Cowboys could realistically select in the second round, and what each would add – Kevin Turner, The Athletic

Turner goes a little bit deeper, listing 13 different prospects that the Dallas Cowboys could target in round two. Could Kris Richard add a bigger defensive back to his room?

If the suspected shift to an emphasis on taller, longer cornerbacks is true, JoeJuan Williams would make a lot of sense for the Cowboys. At this point I’d argue it’s probably a coin flip if he will still be on the board at No. 58. Williams uses his length to jam wide receivers off the line of scrimmage, but he’s still a work in progress when covering down the field. He doesn’t have great recovery speed on paper, but does a pretty good job of sticking to opposing pass catchers. He can be rocked off-balance too easily, as he’s not the most smooth player, but brings an element of physicality and size to the position, which is something the Cowboys might be looking for.

Arizona Cardinals backing off Kyler Murray with the first pick, per report – Seth Cox, Revenge of the Birds

Could the Arizona Cardinals pass on Kyler Murray?

The smoke for the 2019 NFL Draft is thicker than ever.

The latest report from Pete Prisco of CBS Sports is also one of the most damning I can remember, although I do not think it is a true reflection of what is going on:

“Initially, the ownership pushed for Kyler Murray, that much I know, I was told that. The reason they did is they are having a hard time selling tickets. Well, they put it out there. Arizona was lukewarm to it. So now, all of a sudden, they are pulling back and from what I’ve been told, they are going to go in a different direction. They are not going to draft Kyler Murray.”

If this is accurate it is not a good look. While fans are important, they’re also fickle. They’ll bend and sway depending on the way of the wind blowing.

With that said, what rumors are real and what are not as we inch closer to draft week? Could the Cowboys be facing Dwayne Haskins for the foreseeable future?

Dwayne Haskins Will Plummet Down the Board: Fiction

Still, buzz of a stock decline has made the rounds. NFL.com’s Lance Zierlein offers an example: “After speaking with a few different teams, I definitely get the feeling that Dwayne Haskins’ draft stock was more media-created than team-driven. I see Haskins falling on draft day, and I think the chances are increasing that he is not the second QB off the board.”

For months, Haskins has been the favorite to the New York Giants at sixth overall in mock drafts, and there isn’t any reason to think that should change. He’s a prototypical quarterback in every aspect, and the rest of the passer class is so-so. He threw for 4,800-plus yards and 50 scores last year while completing 70 percent of his passes. He likely would have hit those numbers again next year with the Buckeyes, and everyone would have been drooling over him as the top overall pick.

While it’s somewhat concerning that he was only a starter for one season, it isn’t a deal-breaker. Teams aren’t going to let Haskins’ upside fall out of the top 10, not in a league where guys like Blake Bortles have come off the board third overall.

Dallas Cowboys: Taking a look back at the 2016 NFL Draft – Nathan Jones, The Landry Hat

Because it is draft week, it is always great to look back on what happened back in 2016. Can something like that happen again, please?

The Dallas Cowboys have formed their team primarily through the draft. Let’s review the 2016 draft– one of the best drafts in team history.

In 2015, the Dallas Cowboys had a disappointing 4-12 record. With nine picks in the 2016 draft, the front office and scouting department had their work cut out for them. This draft will go down as one of the most successful drafts in team history.

Not only did they land a franchise quarterback and a star running back, but they found guys who would become the foundation of the team.

The Cowboys are widely speculated to add a pass catcher this weekend — be it at wideout or tight end. If that happens, here’s hoping that player(s) turn out like this guy:

Is there any question? Irvin is the most prolific wideout in club history and a member of the Pro Football Hall of Fame. He caught 750 passes for 11,904 yards and 65 touchdowns in a career that was cut short due to a spinal injury. Irvin was named to the Pro Bowl five times and set a single-season NFL record in 1995 with 11 games of 100 or more yards. He retired with seven seasons of 1,000 or more yards. At the time, only Jerry Rice and Steve Largent had more. Above all, Irvin was an integral part of three Super Bowl championships. He was the soul of those teams and an unquestioned leader.

Some very productive tight ends have played for the Cowboys through the years. David LaFleur was not among them. The Cowboys used their first-round pick in the 1997 draft on LaFleur with the hope he would pick up where Jay Novacek left off. He was big, strong and a first-team All-American at LSU. He had promise. It never materialized. LaFleur’s size proved to be a detriment as a receiver. He was more lumbering than elusive and never caught a pass that went for more than 25 yards during his NFL career. LaFleur’s four seasons with the Cowboys were the only four years he spent in the NFL. He finished with 85 receptions for 729 yards and 12 touchdowns. Despite starting 44 games, LaFleur gained more than 200 yards in a season only once.

Dak Prescott has some advice for Kyler Murray.