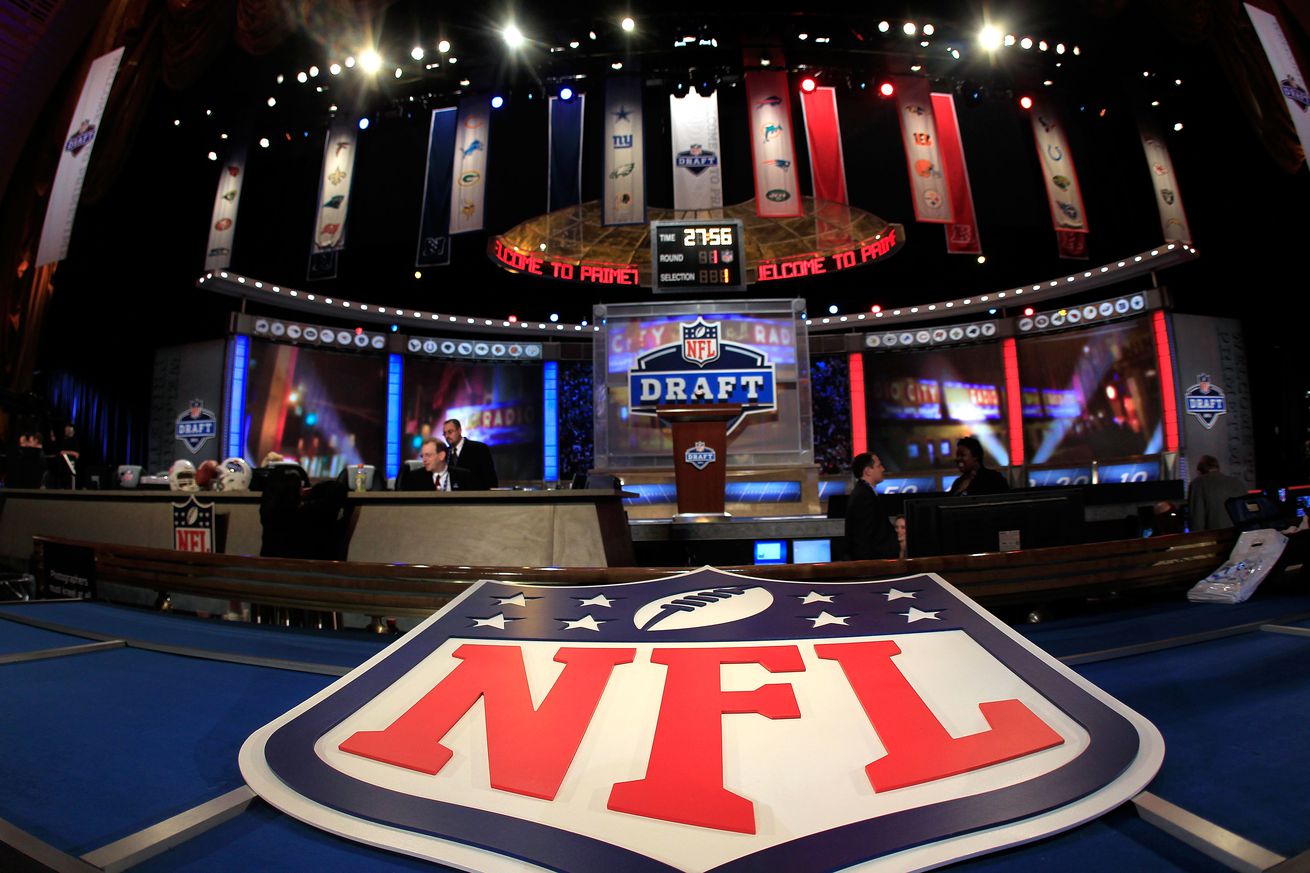 The first round is here, and despite Dallas not having a pick until day 2, things could get very interesting.

It’s draft day! Here’s a heavy dose of things related to that, but first a couple of other things.

The obvious move has now been made.

The Dallas Cowboys on Wednesday exercised the fifth-year option on Ezekiel Elliott’s rookie deal, which keeps the NFL’s reigning rushing champion under contract through the 2020 season.

Amari Cooper focused on relationship with QB, not getting a new deal – Todd Brock, Cowboys Wire
Amari Cooper is why the Cowboys have no first round pick. He is also a player they want to extend sooner than later. But he claims that is not the important thing for him – which is good to see.

This offseason, the Cowboys front office has made it no secret that they’re looking to lock up Cooper and have shown no problem with busting out the checkbook to sign the players they want to keep. Playing hardball with the team brass doesn’t have to be part of Cooper’s game.

“That is why I am not worried about it,” Cooper explained. “I feel like they are active about it. They want to get it done… The market has gone up. I am happy about that. I feel we are in a good place. I feel blessed.”

Cooper is content to let his agent Chafie Fields do the negotiating. Cooper himself is too busy preparing for his first training camp with quarterback Dak Prescott.

Dallas Cowboys: Why it’s not far-fetched to think Cowboys can win 12 games, get home-field advantage throughout playoffs | Jean-Jaques Taylor, SportsDay
Taylor has at times been a bit of a pessimist about the Cowboys, so this is a bit of a surprising take.

Q: What were your impressions of the Cowboys schedule? Seem more or less difficult than last year’s?

JJT: The schedule — as it looks today — puts the Cowboys in position to win 12 games and get home-field advantage throughout the playoffs. Nobody said it would be easy, but the roster is poised to improve internally because there are so many young guys on the team who should still be making a significant improvement. But the schedule gives the Cowboys an ability to get off to a fast start because the Saints are the only one of their first seven opponents they won’t be favored to beat, including a matchup against the Eagles in Dallas. The Cowboys, I believe, are also helped by playing the AFC East this year. That’s one of the worst divisions in football and New England’s decline has started. They must win at least three of four of those games, while sweeping Washington and the New York Giants. If they can do that — and none of that is far-fetched — it positions them to win 12 games, and if they can get home-field advantage, then the streak of 23 years without an appearance in the NFC Championship game should end.

OK, now to what you are all eager for!

Final rankings: The 2019 Sturm 60, and sorting out the Cowboys’ draft plan – Bob Sturm, The Athletic
Sturm’s always excellent analysis is behind that paywall, but here is the payoff for those who don’t subscribe.

To wrap this up, here are the 12 names you should be prepared for the Cowboys to target in the second round. They are all defenders.

The problem: At least half of these names will not make it that far. The Cowboys know the back end of their choices, but the front end is completely dependent on who slides. We shouldn’t forget there are always surprising sliders who may make their way onto the list.

Dallas was a middle-of-the-pack team last year in terms of receiving grade, but the midseason acquisition of Amari Cooper strongly buoys that figure. Prior to the Cooper trade, Dallas ranked 26th in team receiving grade (Weeks 1-8) before ranking 10th in team receiving grade from Weeks 9-17. Dallas should be in the market for pass-catching positions early, and perhaps even often, as passing is by far the most important aspect of football, but they could also look to further build on a defense that has been on the rise over recent seasons.

Savage has back-to-back seasons with grades over 86.0 overall. He’s a missile around the line of scrimmage, laying some impressive hits in the flat. He’s one of our favorite free safeties in the class, and he can arguably cover more ground in the middle of the field than any safety on the Cowboys roster. He would pair exceptionally well with their athletic linebackers, and he would make an already strong defense stronger.

Cowboys confident in new safety George Iloka | Mark Lane, wfaa.com
A reminder as you set your expectations for the draft. The Cowboys went out and got George Iloka because they felt he helped solve their problem.

The signing of Iloka doesn’t mean the Cowboys will neglect safety during the NFL draft, which for Dallas starts with Round 2 on April 26. However, the presence of Iloka means the Cowboys have addressed the need enough to allow them to take the best player available. If the Cowboys do take a safety, they will have to compete with Iloka for snaps.

Dallas Cowboys: Why the Cowboys should draft a backup RB instead of signing a veteran | Jon Machota, SportsDay
Machota likes the idea of a safety at 58, but thinks a running back is in the mix later.

Machota: I do not. The running back position is a young man’s game. They translate as well as any position from college to pro and they can contribute right away. Also, they get used up quickly. Draft a backup RB and get his best years. With that position, I’d always prefer to go younger, if possible.

Dallas Cowboys 2019 Draft Needs: Wide Receiver ✭ Jess Haynie, Inside the Star
Another position to watch for Dallas is wide receiver. It would be a pick that looks farther than this season.

While it sounds like the team is loaded at WR right now, that could change very quickly. Cooper and Gallup who have clear long-term futures in Dallas.

Cobb, Austin, and Hurns will all become free agents in 2020. Noah Brown is signed thru 2020 and should be a contributor, but the rest of the players we’ve mentioned are far from reliable.

Dallas could easily justify drafting a new player now, a young prospect who’d have a four-year rookie deal and the change to be groomed behind veterans. They also have some measures in place to clear room for that player on the roster.

History Suggests Defensive Tackle Unlikely Selection in 2nd Round ✭ John Williams, Inside the Star
As for defensive tackle, the record argues against one being a value pick for the Cowboys.

The Cowboys have used picks in just about every round to find their defensive end rotation, but have been reluctant to spend premium picks on a defensive tackle.

Dallas Cowboys: Film room: Final Cowboys mock draft sees Dallas upgrade at safety, address RB and edge rush before DT | SportsDay
Another one that you have to pay for. I’ll throw in this pick because that fourth round compensatory pick seems a good place to address DT and, well, I wear an Aggie ring.

In previous rounds, the value of available defensive tackles didn’t match up with the cost of Dallas’ pick. That changed at the end of the fourth round, where Texas A&M’s Kingsley Keke possesses the talent commensurate with a pick.

2 Longhorns Who Could be Dallas Cowboys After the NFL Draft ✭ John Williams, Inside the Star
OK, in the interests of equal time for those guys over in Austin. Plus, the team seems to value that position flex.

There seems to be some debate about Texas Longhorns Defensive Lineman Charles Omenihu. Some see him as a defensive tackle because of his size, length, and athleticism, and others see him as an EDGE.

6 shocking trades or moves Cowboys could pull off in 2019 NFL draft – K.D. Drummond, Cowboys Wire
These are of course highly speculative – but this one is getting a little play from other reporters.

Charlton’s second season was a dud thanks in part to a shoulder injury which required January surgery for a labrum issue. While it’s far too early to close the book and consider Charlton a bust, that doesn’t necessarily mean the Cowboys must continue to be his employer.

Dallas has refused to move Charlton inside to 3T position, where we’ve been thinking he should be spending the majority of his time. Everything about his athletic makeup screams he should be moved. Maybe the bad shoulder prevented that from happening in 2018, the same way Lawrence’s bad shoulder is a huge reason why he’s only been a left defensive end the last two years.

But if the Cowboys don’t have those same thoughts, and he’s playing behind Tank Lawrence and Robert Quinn for the season, plus Kerry Hyder, Dorance Armstrong and possibly Randy Gregory (who it certainly feels like the team believes will be reinstated this year), why not explore a trade that could be a big gain?

Now, here’s something that could make the first round a bit more fun for us, because, Dan Snyder.

Just talked to a Redskins source who told me Dan Snyder has “taken over the first round of the draft.”

The last time that happened the Redskins traded two future No. 1’s and a No. 2 to move up for Robert Griffin.

And for some intentional comedy, here is another great video from Scooter Magruder. Enjoy!

NFL Fans Before the Draft pic.twitter.com/iEbCjjgvlr