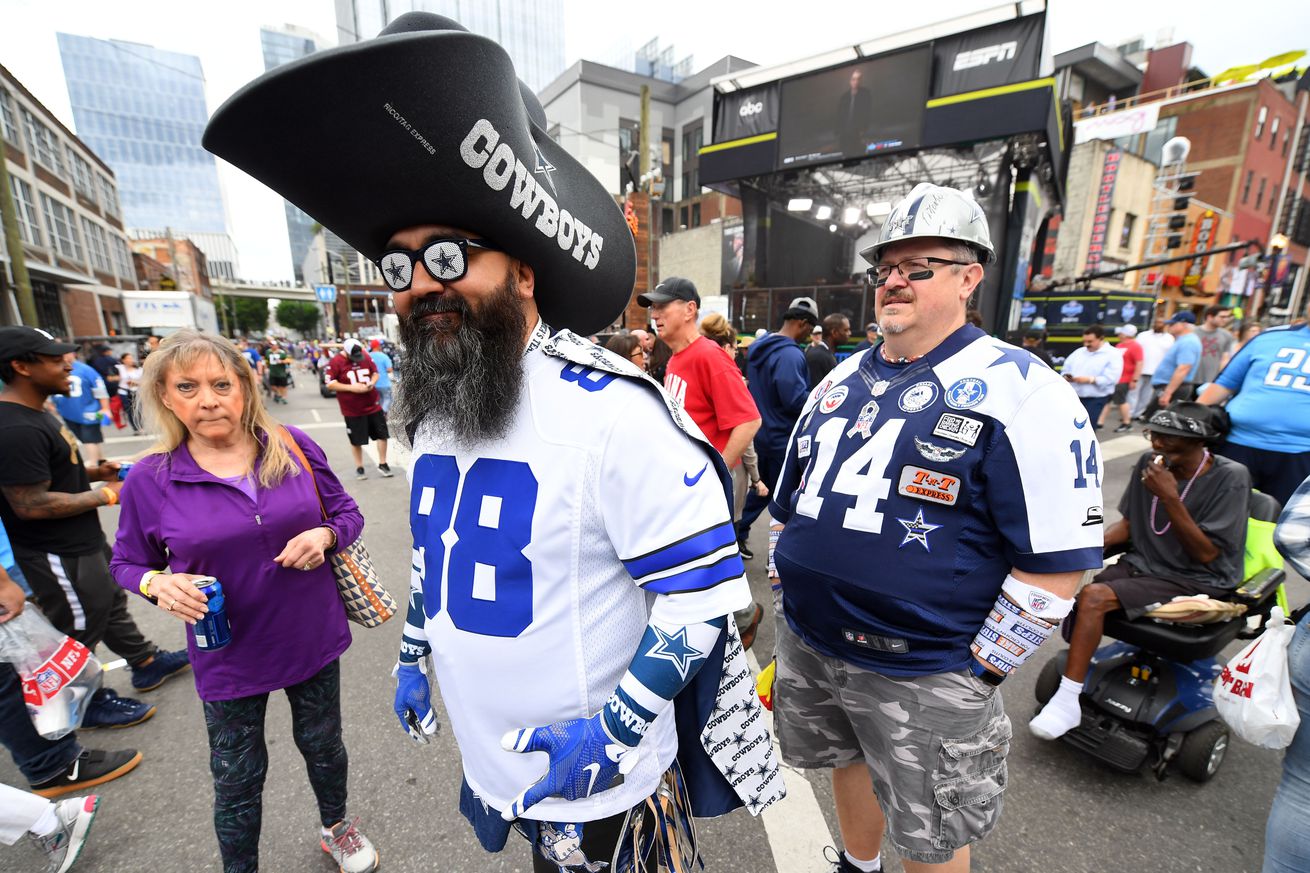 The Cowboys spent their first-round pick early on Amari Cooper. It could be argued that it was a better idea than what the Giants did.

The Cowboys were not part of the first round action but things shook out well for their potential in the second round and beyond. Let’s first look at what the other guys did:

CHECKING IN ON THE RIVALS:

He was named MVP of the Senior Bowl after completing 8-of-11 (.727) passes for 115 yards and one TD while rushing for another score in a 34-24 North team victory. The Giants have now drafted the past three Senior Bowl MVPs, the others being quarterbacks Kyle Lauletta and Davis Webb.

Quick Cowboys’ reaction to the Giants’ pick of Duke quarterback Daniel Jones in the first round: DeMarcus Lawrence will be pleased because Eli Manning will continue as New York’s starter at least for 2019. It’s quite a surprise pick, especially since he does not have the strongest of arms and plays in a tricky stadium. David Cutcliffe coached Manning at Ole Miss and Jones at Duke. The Giants had a chance to take Sam Darnold last year and take Jones this year. Weird. -Todd Archer

With the Odell Beckham pick, the #Giants take #Clemson DT Dexter Lawrence, the Gettlemanist pick so far. He goes No. 17.

Draft expert @JC1053 shares my same opinion, “As someone who covers the Cowboys, I really like the Giants’ picks” #NFLDraft (@1053TheFan)

.@Giants can you please provide us with Dave Gettleman’s mailing address this is too much we need to send him a fruit basket or amazon gift card or something, he is a treasure

Giants trade back in to pick 30, take CB DeAndre Baker:

Washington Redskins select Ohio State QB Dwayne Haskins – Kareem Copeland-The Washington Post
Washington found some great value in getting their quarterback and didn’t have to move future collateral to get him.

The Washington Redskins acquired their quarterback of the future in Dwayne Haskins with the No. 15 pick of the 2019 draft. The Ohio State prospect was widely considered the top pure passer in the class and threw for 4,831 yards and 50 touchdowns with a Big Ten-high 70.0 completion percentage. He was named 2018 Big Ten offensive player of the year and led the NCAA in passing yards and touchdowns.

Haskins has a strong arm and good accuracy, but the largest criticisms center on lack of experience with just one season as a starter. He is traditional pocket passer and some worry about a lack of mobility.

I think Haskins is as good a pick as WAS could have made, given the circumstances.

Washington trades back into the first round and pick up Montez Sweat for an already ferocious defensive line:

2019 NFL Draft: Eagles trade up to select Andre Dillard with No. 22 overall pick- Glenn Erby- EaglesWire
The Eagles traded up in the first round but it was smart to get ahead of the Texans to get the guy they wanted.

The Philadelphia Eagles and fans alike waited almost three hours to pick, but in the end, Howie Roseman got one of his men, as the Birds traded Pick No. 25, No. 125 and No. 197 to the Ravens for the 22nd pick, where they drafted Washington State left tackle, Andre Dillard.

With Dillard, you have to believe that the Eagles are looking for Jason Peter’s eventual replacement on the offensive line. According to the NFL Network’s Daniel Jeremiah, Dillard is a guy worthy of a first-round selection, and a player who is considered the premier pass protecting left tackle in this draft.

The Philadelphia Eagles trade up to draft Andre Dillard with the 22nd overall pick.

My big board value: 19th overall.

I love it. Clearly jumped Houston to take him.

Amari Cooper Not Sweating Contract Talks-David Helman- Dallas Cowboys
There’s a very good reason the Cowboys won’t be picking in the first round, his name is Amari Cooper and he’s looking at a pretty lucrative extension coming very soon.

“I’m not really worried about it that much,” he said “I’m more focused on actually playing and really earning the respect, and then the contract.”

Fortunately for Cooper, it seems like he has already earned plenty of respect around the organization. The Cowboys traded for Cooper knowing he was headed into a contract year. Given the amount of success he has already had, the front office has not been shy about discussing their plans to pay him.

As Cowboys wait out NFL draft’s first round, Dallas chooses to focus on its bright future with Amari Cooper-Kate Hairopoulos SportsDay
Remember that as the first round comes and goes without the Cowboys making a pick that the team has Amari Cooper. He was well worth the trade.

Draft experts have declared this year’s group of receivers nearly void of first-rounders.

The Cowboys had peeked ahead at the 2019 batch as part of their decision to go for Cooper.

They’d decided they could get a receiver who could help immediately and for years to come if they could deal with parting with that cherished first-round selection.

Amari Cooper, the No. 4 overall pick in the 2015 draft, turns 25 on June 17, with three 1,000-yard and Pro Bowl seasons already on his resume. The top projected receivers in this draft, such as D.K. Metcalf and Marquise Brown, will be 21 and 22 when the season starts.

Cowboys, Bears troll Raiders over trades before NFL draft- Ryan Young- Yahoo Sports
Both the Cowboys and the Bears seem perfectly content without a first-round pick at the NFL draft this year, and made sure the Raiders were fully aware.

The Cowboys did so to land wide receiver Amari Cooper in October, while the Bears made signed linebacker Khalil Mack to a record-setting $141 million deal just before the season started.

While those moves could have lead to some buyer’s remorse on draft day — the Cowboys and Bears, along with the Cleveland Browns, Kansas City Chiefs and New Orleans Saints, are without a first round pick in the NFL draft on Thursday night — it doesn’t sound like that’s the case in either Dallas or Chicago.

The Cowboys shared a video on social media on Thursday afternoon where they asked Cowboys vice president Stephen Jones about what’s different with the draft this year without a first round pick.

“When we get ready to pick, and the Raiders pick our pick, we’ll be watching Amari highlight tapes,” Stephen Jones said.

Cowboys doing well in the draft with Jerry Jones taking a back seat – Calvin Watkins-The Athletic
Jerry Jones has the title but over the years, his role has changed in the day-to-day management of the team. The Cowboys have become one of the best drafting teams in the league.

“One thing that’s interesting (is) at some point you do just agree to disagree, and we try to avoid those players if we can’t get a consensus,” Stephen Jones said. “You try to find a player that fits at that level where there is a consensus. We’ve done a great job of that, and Will I credit a lot. He’s just a tremendous consensus builder. He spends a ton of time obviously with his staff. He also spends a ton of time with our coaching staff, with each position coach. And then, of course, he’s very intensively involved with Jerry and myself in terms of how he communicates. I think he’s as good as they get.”

Defensive end Maxx Crosby from Eastern Michigan is the likeliest Cowboy we haven’t spent much time discussing. I’ve nicknamed Crosby The Human Windmill, as he’s thin, long and all arms right now, but he has a ton of upside and the Cowboys have shown interest. I have a third-round grade on Crosby and think he’s a great fit as a developmental pass-rusher who could really help in 2020. At 6’5 tall and 255 pounds, Crosby accrued 18.5 sacks over the last two seasons. He’s very active, long and energetic.

The Cowboys would be pretty thrilled by this result. Not only do they fill their biggest need, but they get someone with the versatility to play just about every spot in the secondary. Thornhill (6-0, 205) is somewhat similar to Byron Jones in that he is extremely athletic, posting a 4.42 time in the 40-yard dash and a 44-inch vertical at the combine.

If none of the safeties they like are still on the board, defensive end or a three-technique defensive tackle could be the pick here. Louisiana Tech’s Jaylon Ferguson or TCU’s L.J. Collier could fit at DE. Central Florida’s Trysten Hill is a possibility at DT.

Draft Day thoughts from VP Stephen Jones including Cowboys targeting a safety-Clarence Hill Fort Worth Star-Telegram
VP Stephen Jones mentioned safety in his pre-draft talk and there’s a good chance one of their targets could be there at 58.

The Cowboys are looking hard at safety and Jones acknowledged that finding a sure-tackling strong safety would be more ideal to play opposite rising free safety Xavier Woods than another free safety, though they would take a ballhawk if he was the best player on the board.

Jones said Woods, a former sixth-round pick who the Cowboys had graded as a fourth-rounder, has been “even better than we thought he’d be.” “In a perfect world probably a strong safety is the best fit (to pair with him),” Jones said.

The players that best fit that bill are Washington safety Taylor Rapp and Mississippi State safety Jonathan Abram. Virginia’s Juan Thornhill is a former cornerback with blazing speed. If the Cowboys choose him, they would go with left and right safeties rather than defined roles as free and strong safeties.

Think taking a safety is the Cowboys’ top priority at No. 58? Jerry Jones’ draft history says otherwise-Kevin Sherrington- SportsDay
Don’t be so sure that the Cowboys are targeting safety with their first pick, 58th overall in the second round.

Before we get ahead of ourselves here, first a caveat for the Cowboys’ debut Friday in the draft: They shouldn’t take a safety at 58 if they rate another player at a different position higher. Like Deebo Samuel, the wide receiver. They should pick a safety in the second round only if they deem him worth it.

The thing is, they almost never do. Consider some history.

Over Jerry Jones’ 30 years as owner, the Cowboys have drafted a safety in the first or second round just three times: Darren Woodson, who’d been a linebacker at Arizona State, was a second-rounder in 1992; Tony Dixon, taken after Quincy Carter in the second round of the 2001 draft; and Roy Williams, the eighth pick in 2002.

ESPN makeup artists helped enhance Jason Witten’s hair -Stefan Stevenson Fort Worth Star-Telegram
The future Hall of Fame tight end admits that he prefers the “natural” look but ESPN wanted him to have a full head of luscious locks.

“It just kind of happened,” Witten said. “The makeup lady did it one time and I was like, ‘alright, I’ll keep doing it.’ It takes like two minutes. So, I was like, ‘cool.’”

Both Sturm and McDowell, who are both proudly bald, didn’t seem to completely buy Witten’s hair mea culpa.

“So every game day you would hop in the chair and she’d go to work on you,” Sturm asked.

Witten, who turns 37 on May 6, confirmed that’s how he would appear with a flush head of closely-cropped hair on air. But he didn’t explain what was used for the enhancement.

“I don’t know if I’m buying all of this either, but it’s OK,” McDowell said with a wink. “It just seems so enhanced. Now, the camera does put on 10 pounds of hair … “