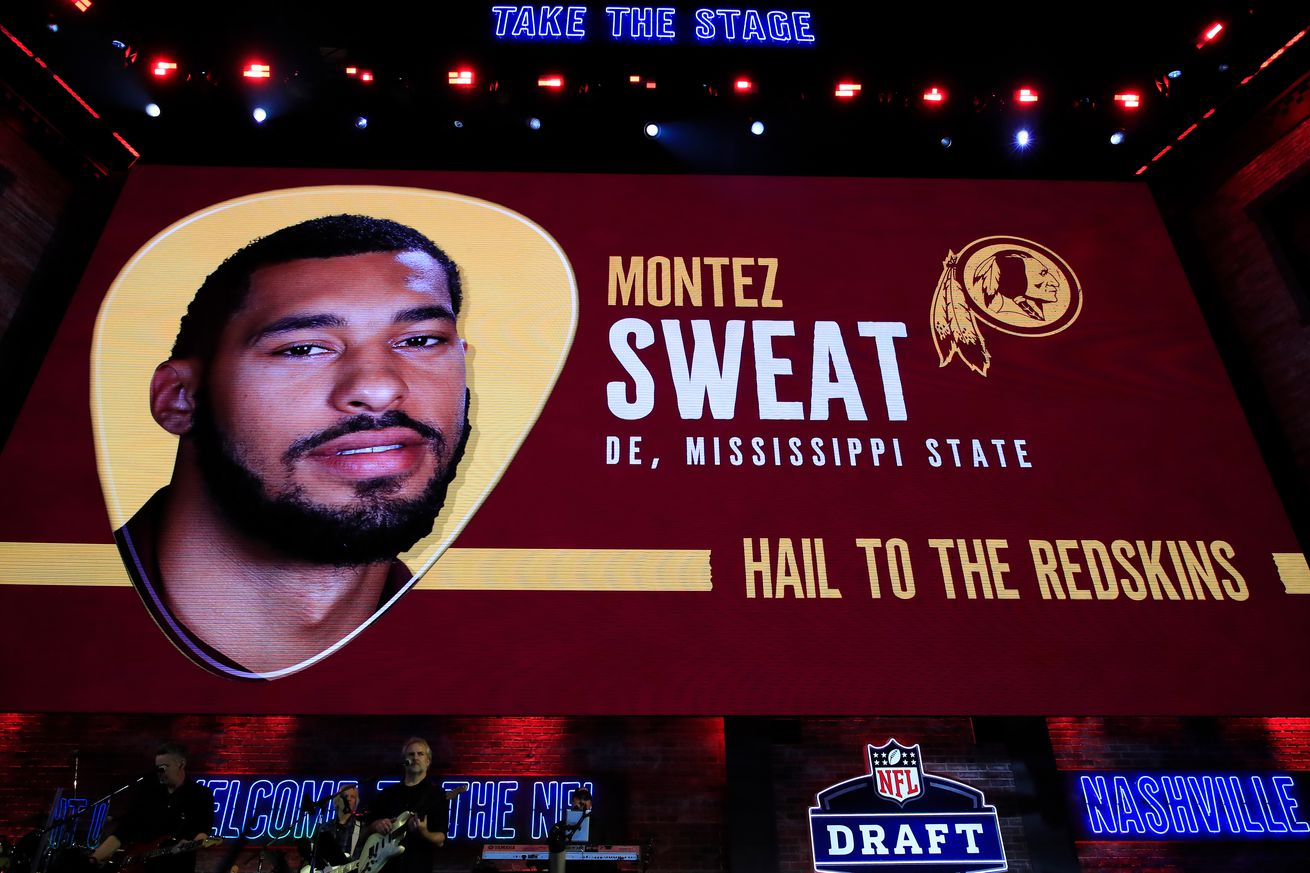 There were plenty of things going on during the first round of the draft.

The first day of the 2019 NFL Draft is over and in case you missed it, the Cowboys made their selection much to the jubilation of fans everywhere…

Okay, credit Kent Garrison over at the mothership for such an entertaining spoof. Needless to say, Cowboys fans have to feel good about what they got from their first-round pick. But what about the other guys? What was going on with the Cowboys divisional foes? The three other NFC East teams selected a total of six players in the first round.

1. No Sweat for the Redskins

To start things off, the Washington Redskins showed a lot of discipline and didn’t trade up to get their quarterback. Instead, they remained calm and got good value when they selected Ohio State’s Dwayne Haskins with the 15th overall pick. With no Alex Smith available for the 2019 season, expect Haskins to be a thorn in the Cowboys side sooner versus later.

But then, things went from bad to worse when the Redskins pulled off the moves of all moves, jumping 20 spots to get back into the first round to acquire one of the top edge rushers in the draft. Mississippi State’s Montez Sweat was diagnosed with a potential heart issue which caused his draft stock to drop. The Redskins took advantage and took the star edge rusher with the 26th overall pick.

If Dwayne Haskins isn’t available at No. 15, Sweat might have been the pick there. #Redskins get both.

It just feels like the Giants don’t know what they’re doing. Maybe it’s the fact they draft poorly year after year. Or maybe it’s the fact they traded away one on of their top players in Odell Beckham Jr. It wasn’t surprising to see them draft a quarterback, but using their sixth overall pick to select Daniel Jones has choke written all over. Of course, only time will tell, but at least we can finally say that they are preparing for life without Eli Manning. Let’s just hope they go from one mistake-ridden quarterback to another. Fingers crossed.

At 6’5” the Duke prospect has great size. He’s a fundamentally sound quarterback that exhibits great footwork and has great awareness of his surroundings. He’s an accurate passer, but doesn’t have the big arm to make the deep throws. Jones is a little late to react and that will get him in trouble, but limitations with his arm will make him a bus driver-type quarterback at best.

It seems like Jones would’ve been available at their pick at 17, but you never know. When you have a need like the Giants do, you really can’t afford to take chances. Last thing they want is Eli still quarterbacking in 2020.

The Philadelphia Eagles traded a fourth-rounder and a sixth-rounder to move up three spots to get a top offensive tackle in the draft in Andre Dillard. It pains me to say this, but that was a great move. The draft capital wasn’t all that much, and sure – it’s just three spots, but Dillard is a blue-chip player and getting a talented tackle to help protect Carson Wentz was very smart.

Dillard is an athletic guy with great size. He’s got happy feet and moves rather easily into the second level. He’s a high character guy that could potentially fill the shoes of Jason Peters whenever father time does him in. Well done, Philly.

Everything was going according to plan until the Oakland Raiders went on the clock. Leave it to them to throw the first wrench in the draft by selecting Clemson’s Clelin Ferrell with the fourth overall pick. It’s not that Ferrell isn’t a great player. He is. But he wasn’t in a lot of top 10 players that I remember seeing. Oh well, the Raiders march to the beat of their own drum. They traded away Khalil Mack so they have their own idea as to what constitutes a great pass rusher and it goes against conventional wisdom.

But Oakland was able to slap the Cowboys in the face a bit by taking one of our favorite safeties off the board when they drafted Johnathan Abram with the same draft pick they received from the Cowboys for the Cooper trade. Nobody thought Abram would make it to 58, but it took a safety off the board and that could have an ripple effect later on Day 2.

Johnathan Abram is the most Jon Gruden pick of all time. Old school safety who is gonna create pick hits and get penalized a lot. Not my kind of guy in this new NFL, but he is a tone setter. SAF7 is off the board, which is fine for the Cowboys.

There were two safeties taken (Abram and Darnell Savage), but there are three of our favorites are still available – Chauncey Gardner-Johnson, Taylor Rapp, and Juan Thornhill. If safety is washed out, there are still a lot of great corners available. The projected first-round guys, Byron Murphy and Greedy Williams, are still there. So what if a player like Justin Layne is available? He is the perfect Kris Richard-type corner.

With only one CB taken off the board on Day 1, this officially puts Justin Layne on my radar as a potential target at 58 for the Cowboys. pic.twitter.com/Sz8Ozv4Cdd

We don’t know where the Cowboys minds are at, but it’s shaping up to where the best player available could be a day-one starting defensive back.