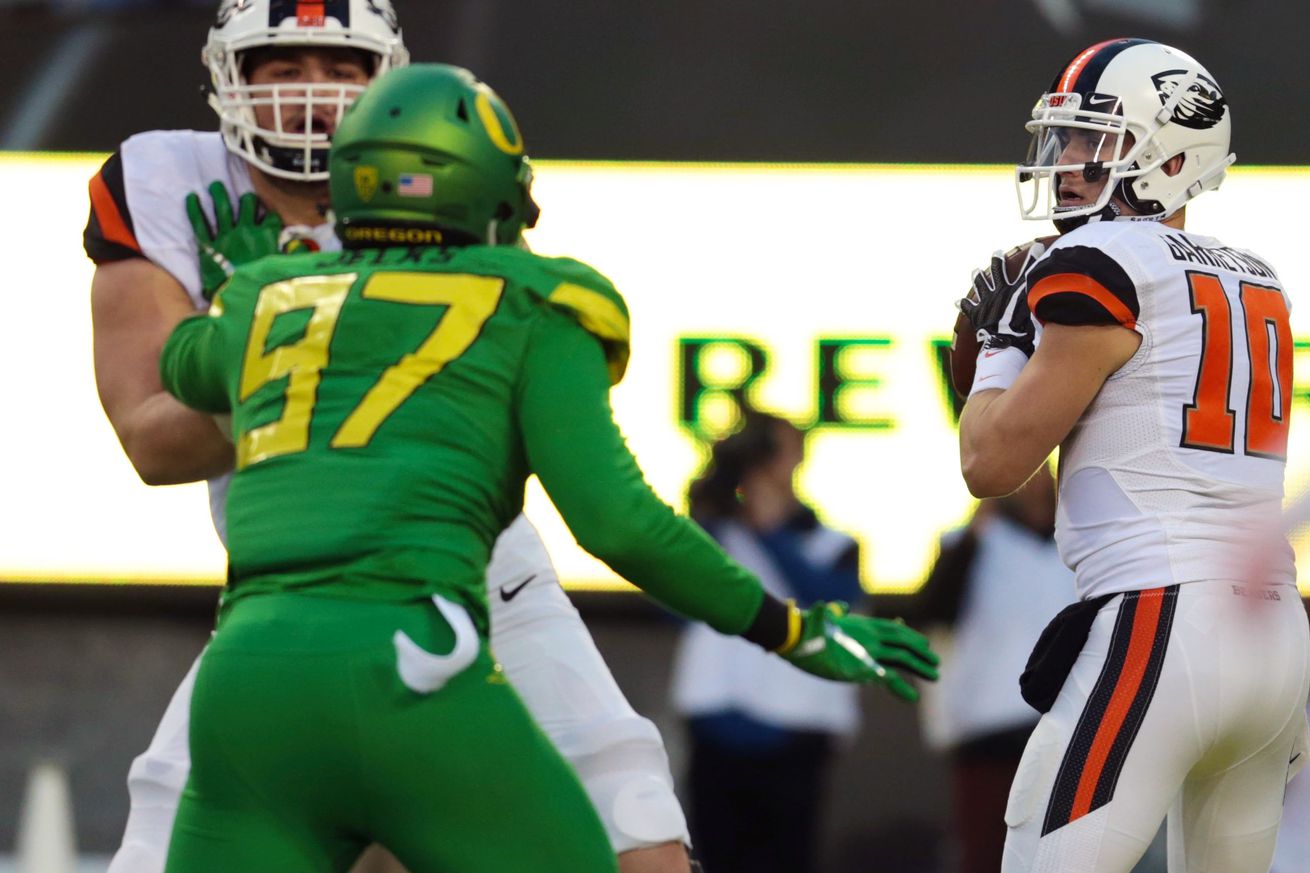 There’s going to be a lot of competition at the Cowboys defensive end position.

The Cowboys went into this draft seemingly set at their defensive end positions, with DeMarcus Lawrence and Robert Quinn as the primary starters with Taco Charlton, Dorance Armstrong Jr., and Kerry Hyder as depth.

Now they’ve added more competition. It started when Dallas took Miami defensive end Joe Jackson in the fifth round at 165th overall. But then the Cowboys took another defensive end in Jalen Jelks of Oregon. Jelks, taken in the seventh round at 241st overall, joins a suddenly crowded defensive end group in Dallas.

Jelks is one of the more intriguing edge rushers from this class, too, as he played out of position a lot in college. While the Ducks ran a 4-3 defense, it was very different from what the Cowboys run. Most notably, they routinely had Jelks line up as a 4-technique defensive end on early downs, which had Jelks going straight up against offensive tackles. On passing downs, Oregon usually moved Jelks inside to a 2-technique spot, which saw him going head on against guards.

The problem with this is that Jelks was listed at only 245 pounds in college, making him woefully undersized for those roles. As such, Jelks only put up 3.5 sacks in 2018 and seven sacks in 2017. But Jelks added some beef for the combine, where he measured in at 256 pounds. More interesting, though, is that Jelks stands at 6’5” with 34 5/8” arms, making him a very long, rangy edge rusher.

Jelks doesn’t seem to be overly athletic, but he’s relied on his great length to overcome any gaps in athleticism. When rushing the passer, he gets extension and knows how to use his length to get leverage on offensive linemen. When he has a good get off, Jelks can be nearly unstoppable. The issue is that Jelks’ biggest weakness seems to be his fundamentals; in other words, he’s inconsistent in coming off the line of scrimmage and doesn’t show good instincts when it comes to pass rush moves.

Much like Joe Jackson, Jelks is a bit of a developmental defensive end at this point. He needs to refine his fundamentals, but if he can do that, he can become a quality situational pass rusher off the edge. The reason Jelks fell further than Jackson is largely due to his playing out of position in college, so he wasn’t able to flash his potential as well as Jackson did.

Jelks should fit in well in Dallas, where he’ll be primarily working as a 5-technique defensive end coming off the outside shoulder of the offensive tackle. This will allow him to best utilize his length and strength. The question will be if Jelks can earn a roster spot over all the other defensive ends now on the Cowboys’ roster. If not, he could be an early candidate for the practice squad. Only time will tell, but Dallas got a player with a fairly high ceiling for a very low cost.