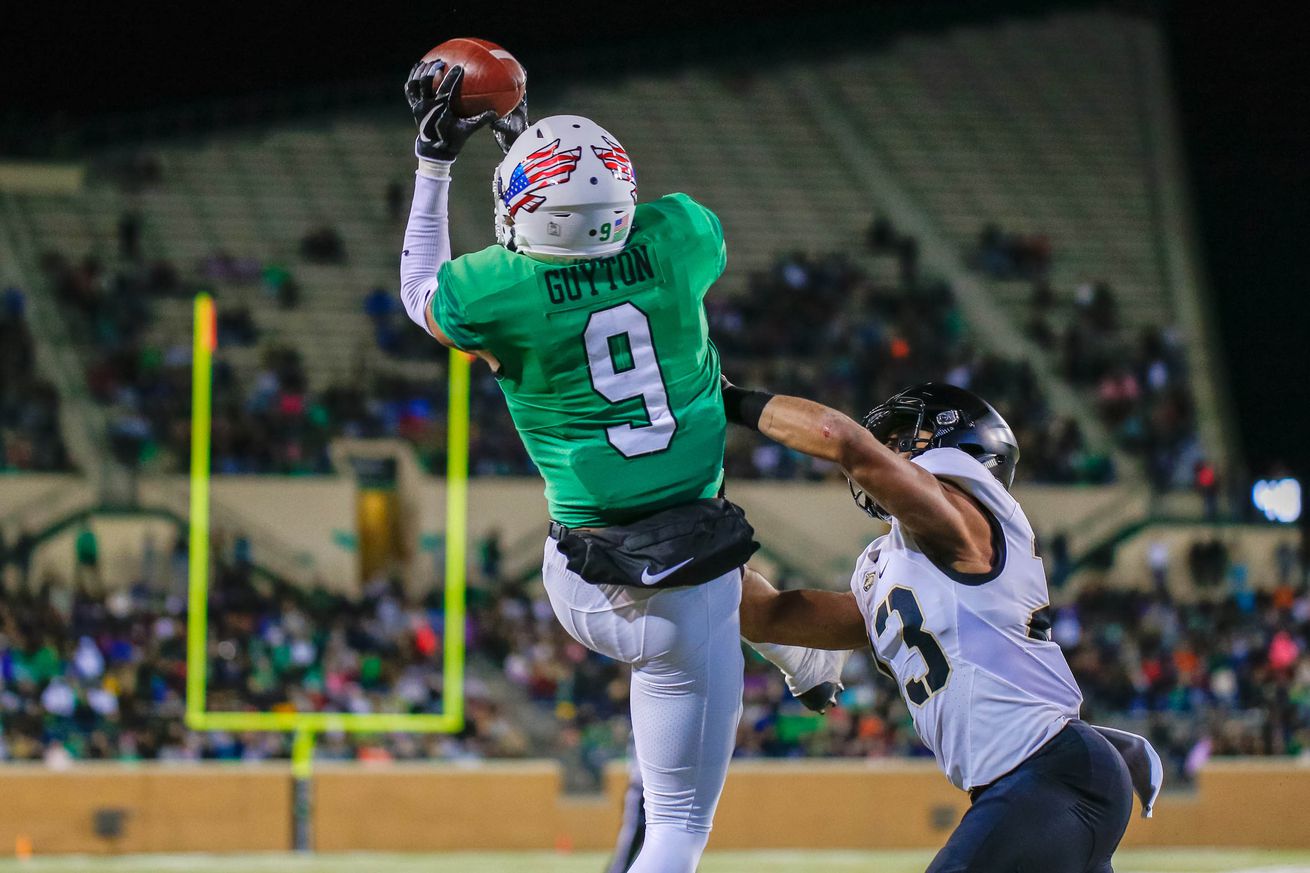 What could the Allen native bring to America’s Team?

Naturally, all of the attention and focus is on the players that the Dallas Cowboys selected in the NFL Draft. Trysten Hill has the chance to provide much needed depth in the interior of the Cowboys defensive line, Connor McGovern offers another body along the offensive line, and Tony Pollard is an electrifying talent that can be used in multiple ways.

But, it appears as if Dallas also did a solid job signing undrafted free agents once the draft concluded.

Kyler Murray was the very first pick of the 2019 NFL Draft. The Heisman trophy winner took the college football world by storm this past season before becoming the top pick off of the board. Prior to his collegiate career, Murray was a legend at Allen High School, a suburb just north of Dallas. His favorite receiver? Jalen Guyton.

Guyton put up video game numbers with Murray at Allen, winning three consecutive state championships and an undefeated high school record. Over the course of his junior and senior seasons, Guyton grabbed 124 passes for 2,798 yards, and 35 touchdowns.

A proven commodity in the passing game, he is a big play maker who does his damage in the deep passing game by stretching the field. His home-run ability is evident by the fact that over 30% of his total touches went for scores.

Guyton went on to sign with Notre Dame out of high school, but eventually left South Bend. He ended up at Trinity Valley Community College at Texas, where he averaged over 21 yards per catch and recorded 12 touchdowns, before signing with North Texas.

At UNT, Guyton flourished with Mason Fine at the helm. The Fine-to-Guyton duo connected for 1,580 yards and 15 touchdowns on 103 catches over two seasons. Guyton averaged over 15 yards per reception with the Mean Green, proving that he can stretch the field and move the chains.

North Texas WR Jalen Guyton is one of the more sleeper WR who I like. Per @AJDraftScout I scouted him last night, and he is explosive and crisp in his routes. He’s a real deep threat with deep speed. Probably a developmental guy because he’s still raw, but he can become a nice WR pic.twitter.com/WcJ8oeflC6

The 6-foot-1, 202-pound target was named the conference’s Newcomer of the Year after his initial season in Denton before putting up even better stats in 2018.

Then, Guyton impressed at North Texas’ Pro Day. The Allen native was not among those invited to the NFL Combine, but he made the most of his opportunity in front of scouts. Gil Brandt noted Guyton’s impressive showing in Denton:

At @MeanGreenFB pro day yesterday, WR Jalen Guyton (6007, 212) really looked good in his workout, caught the ball well and tested off the charts. Looks like he could get drafted late.

Performances are typically better at Pro Days than at the combine, but there is no denying how impressive Guyton’s numbers are. Guyton’s 40, 3-cone, and vertical all display speed and explosion that have a chance of translating into separation at the next level.

Dane Brugler wrote on Guyton in ‘The Beast’, noting that he has top-end speed that allows him to get behind the defense.

SUMMARY: A three-star recruit out of high school, Jalen Guyton (guy-tin) helped lead Allen to 43 straight victories and three consecutive state titles (teammates with Kyler Murray). He signed with Notre Dame, but was suspended during his redshirt year and left the program. After one season at the JUCO level, he transferred to North Texas. Lining up as the “Z” receiver, he posted consistent production the last two seasons, although more was expected out of him in 2018. Guyton is able to alter route speeds with ease, using his top-end speed to streak behind the defense. However, his route construction and timing lack polish with questionable coverage awareness. He tracks the ball well downfield with the coordinated skill to make plays over defensive backs, but often relies on his body to finish catches. Overall, Guyton is currently a better athlete than wide receiver, but his play speed and separation quickness are worth developing at the back end of a roster.

The Dallas Cowboys brought in Guyton for a pre-draft workout, and they must have seen enough to take a flier on the Allen native. It is obviously an up-hill battle for someone that went undrafted to make a 53-man roster, but Guyton is an athletic, speedy receiver with a championship pedigree in the state of the Texas.

If you are looking for a sleeper to push for a roster spot, Jalen Guyton could be it.