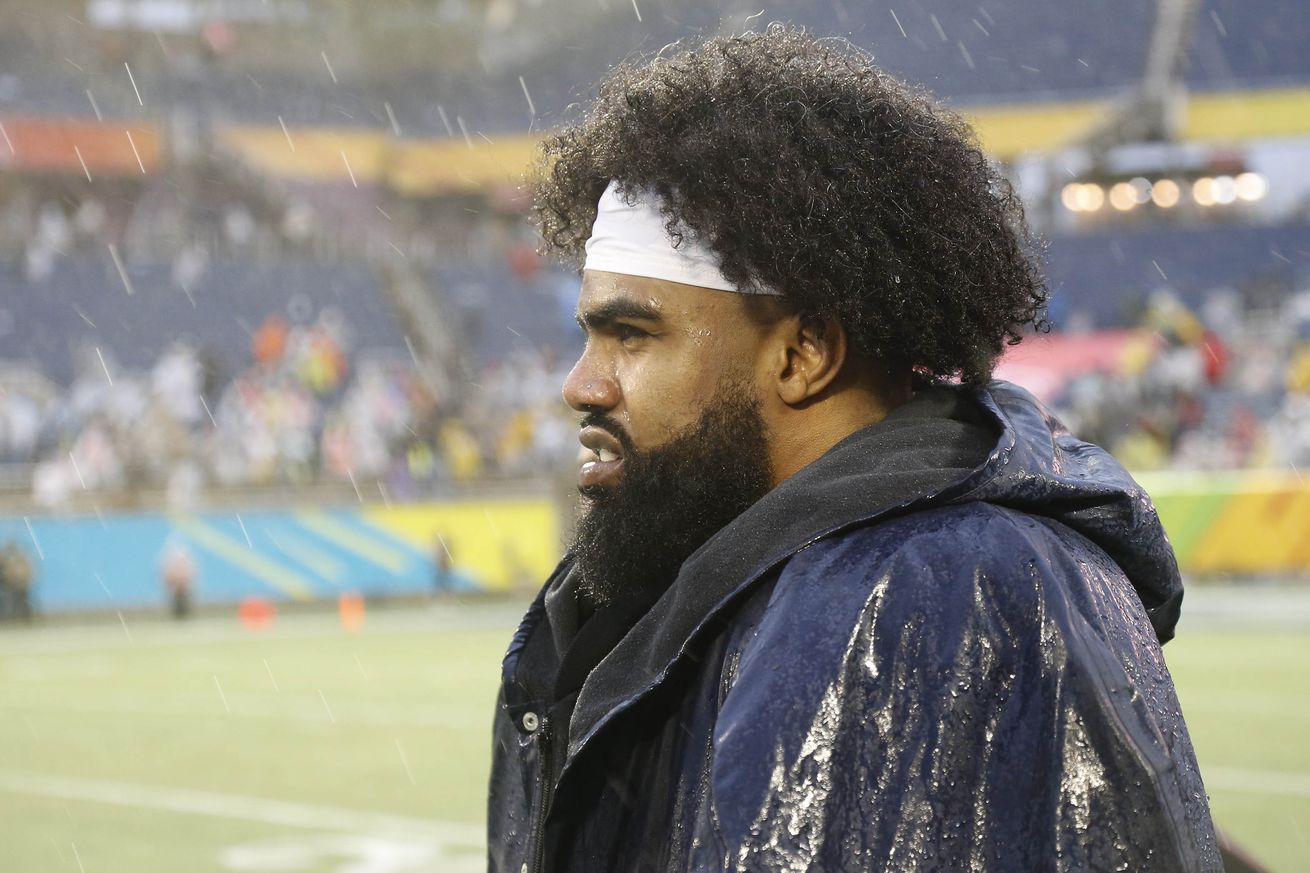 Plus lots more, so dig in!

Pollard is so electric you have to wear rubber gloves to press play on his film.

He’s an absolute terror in space, ranking sixth in the 2019 draft class in percentage of not being tackled upon first contact at (41.8%), according to Pro Football Focus. He can break a game open as a running back, a wide receiver and most certainly a returner — instantly making him the most versatile player on the Cowboys’ roster. Pollard rattled off 2,616 kick return yards and seven return TDs in his last three collegiate seasons, numbers good enough to see him honored twice as an All-AAC offensive player and twice as an All-AAC Special Teams Player of the Year.

This is a player who runs a sub-4.40 second 40-yard dash and scores a touchdown every 13.5 touches. Those are insane figures in and of themselves, but factoring in the fact he averaged nearly an entire first-down whenever he was given the ball (9.2 yards per), you find yourself hard-pressed to figure out why he was still on the clock when the 128th-overall pick rolled around. The Cowboys were desperately hoping he’d fall and entertained moving up slightly to get him, but decided to stay put, and their patience paid off. Pollard would have been a great value in the third round, so landing him later in the fourth makes it that much better.

Cowboys Draft: Why DT Was The Biggest Need – Broe Reeve, Sports Talk Line
A nice bit of analysis on why the Cowboys went DT over safety in the draft.

Most Cowboys fans were hoping the team would draft a safety at 58, especially with players like Taylor Rapp and Juan Thornhill still on the board. However, defensive tackle is by far a more pressing need for many reasons.

The Cowboys formula for winning is running the ball on offense and stopping the run on defense. When you look at last season, teams were beating Dallas if they got the ground game going. In 5 of the 6 regular season losses, the Cowboys gave up over 100 yards rushing. Let’s also not forget the 273 yards they gave up to the Rams in the playoff loss.

When the defensive tackles aren’t wrapping people up, their job is to get penetration and occupy blockers allowing the linebackers to roam free. The Cowboys have really good sideline to sideline backers in Leighton Vander Esch, Jaylon Smith, and Sean Lee. All three are heat-seeking missiles, but only when they are free to run and don’t have a larger 300-pound offensive lineman putting their hands on them.

The safety position isn’t exactly loaded but the defensive tackle position was severely lacking in talent. Antwan Woods played well but that was his first time earning a starting gig in his career and he went undrafted back in 2016. Maliek Collins played pretty well but he ended the season with only 19 tackles and the depth of Ross and Covington is nothing to get excited about.

Cowboys Draft for Future; What Does it Mean for Jason Garrett? ✭ Jess Haynie, Inside the Star
The meme of Jason Garrett’s hot seat is in full swing. But as this points out, ownership may have more confidence in him than some would think.

Management may have felt that they’ve already given Jason Garrett more than enough to get the job done in 2019, so they took a more long-term view towards the draft.

Again, not giving Garrett an extension beyond this season says a ton. Dallas clearly wants to see how things go before they make any commitments, and that is its own form of indictment.

But by not throwing every resource into 2019, which includes the use of their draft picks, the Cowboys are also saying that they have faith in Jason Garrett to succeed with the roster they’ve built. If you’re going to read one as an indictment, consistency demands that you read the other as an endorsement.

Year after year, Dallas makes it clear they do not “stick to their board” as a BPA approach demands. They do what BPAPN (best player at a position of need) explains, stack a board based on talent, and then mix and match based on a ranking of their needs, position scarcity and such to create a cluster of prospects for their current selection.

Dallas took into account they might not be able to get a starting quality defensive tackle or safety. They felt they had a future need at offensive line, planning for the eventual parting with right tackle La’el Collins and knowing OL is the team’s biggest priority beyond quarterback. But that need, which Connor Williams proved in 2018, is one that requires a bit of seasoning and likely needs to be acquired a year ahead of time. So while they loved McGovern, as evidenced by his placement on their big board, they knew that if they took him in the second, he wouldn’t have an immediate impact AND they likely wouldn’t have gotten an impact defender they felt was the top priority.

Bet you never realized how many draft experts have entered this cottage industry, seemingly everyone and their brother qualified to grade these NFL drafts. Give me a break. Plus, this is a projection-oriented business. No one knows all on every team in the league. Case in point, let’s take the 2016 draft. Friday is the deadline for teams to pick up the fifth-year option on their first-round picks – as did the Cowboys with Ezekiel Elliott, selected fourth that year. Man, if you’re drafting a guy in the first round at least through pick 20, that guy ought to be productive enough to pick up that fifth-year option, plus even earn a second contract. If not, you failed. But as of Wednesday, only 15 of the 31 teams – New England had to forfeit its first-round pick – had picked up the fifth-year option on their first-round selection. That included each of the first seven picks in the first and eight of the top 10. But that’s it. Now three years later, go grade that.

Why Draft Pick Doesn’t Impact Travis Frederick – Rob Phillips, Dallas Cowboys.com
Some saw the selection of Connor McGovern in the third round as a sign of concern about the recovery of Travis Frederick. But it wasn’t.

(Frederick’s) goal is to be full-go when camp starts in late July.

“I feel confident in my ability to do it,” he said. “But we really won’t know until I get out and do it again. I feel good in everything that I’m doing, and everything’s been on schedule or ahead of schedule. So, I feel good. I’m excited to get back out there.”

As for McGovern, the Cowboys simply viewed him as the best available player at the end of the third round. He was the last prospect left on their board that had a second-round grade.

Cowboys Draft: Starters the top and $109,115 of UDFAs at bottom? – Mike Fisher, 247 Sports
The Cowboys believe some of their UDFA signings will pay off. Just not right away.

This week, I think it’s happening with Clemson tackle Mitch Hyatt, who Dallas officials privately believe can be a prize of this class — draftees and UDFAs included.

The Cowboys also have high opinions (and had draft-worthy grades) on a host of other kids, including Kentucky cornerback Chris Westry and Kansas defensive lineman Daniel Wise.

Is Wise, though, as an example, going to play this year, or even get a 53-man roster spot this year? Unlikely, as top pick and second-rounder Trysten Hill is being counted on as an immediate rotation player (“plug-and-rotate,” if you will). Fourth-round running back Tony Pollard is obviously being counted on as a contributor behind (or alongside?) Ezekiel Elliott. But otherwise? Even third-round O-lineman Connor McGovern — who Dallas graded as a high-2, even better than Hill — is going to have to wait. His real turn will come in 2020, when the Cowboys will have to make some difficult financial decisions on La’el, and maybe even on Tyron Smith.

Same thing in the interior D-line. Maliek Collins‘ contract is up after this year and versatile stalwart Tyrone Crawford gets expensive in 2020. Maybe Hill overtakes Maliek this year. But eventually … Dallas can envision Hill and Wise taking big leaps in 2020 on the defensive front … and McGovern and Hyatt taking big leaps in 2020 on the offensive front.

Scout’s Eye: 2 Intriguing WRs Among UDFA Class – Bryan Broaddus, DallasCowboys.com
This is a good series to keep an eye on. Here is a pertinent quote from each of the two WRs he looked at – and they pretty much show what the Cowboys were after.

Physically, this is a good looking kid. He also has speed, clocking a 4.39 40-yard dash.

Another burner with 4.39 speed, Johnson lines up both inside and out.

Dallas Cowboys: Get to know the 13 undrafted rookie free agents the Dallas Cowboys signed to their 90-man roster | Jon Machota, SportsDay
This has a nice capsule on all the UDFAs. But the money quote comes from the team’s scouting maester.

Will McClay, Cowboys vice president of player personnel, shared his thoughts Wednesday on some of Dallas’ undrafted free agents.

“I really like, because of what we have in here coaching him, Chris Westry from Kentucky,” McClay said on 105.3 The Fan’s G-Bag Nation show [KRLD-FM]. “He’s got rare, unique physical size and athletic ability. Can we get it out of him? He’s a 6-4 corner that runs a 4.3 (40-yard dash) with 33-inch arms. Within the system, I think he has an opportunity to come in and compete to see if he can add something to this roster.

“Daniel Wise is a guy that is local and he plays our kind of way. Can he bring something to us? We got some free agent offensive linemen that have the ability, if they can develop, to give us depth. And we got a couple of young receivers that I think can have some NFL ability in Jon’Vea Johnson and Jalen Guyton. And we have four undrafted free agent linebackers that all have traits that we like.

Best Thing Zeke Can Do Is Exactly What Hes Doing | Cory Mageors, 105.3 The Fan
Just how long Ezekiel Elliott’s career in Dallas will be is still to be determined. But he is doing all the right things to cash in, one way or another.

All of the greats seem to have had an uncompromising work ethic that never nagged them. Zeke is showing up to voluntary workouts and looks like he’s in the best shape of his life despite what national criticizers say. The work he puts in to prepare his body is simply the price of admission into the upper tier.

The next level stuff is the off the field. People may say they don’t care what these guys do off the field, but a large portion of the NFL fan base really does love the stories of humans that comes along with the player.

He isn’t getting into any trouble that we know of, and the party animal we heard about is now doing it in public with the rest of DFW. Watching him at the Stars games is a brilliant PR move and one I know many former Cowboys loved to be part of as I sat next to Daryl Johnston, Tony Casillas and Chad Hennings at many Stars games growing up in the Cowboys heyday.

Looks like the Cowboys leaders did in fact do some leadership-like things on their trip!

Looks like the Cowboys trip to Durham did indeed involve some teamwork. They did it with America’s finest. (via @EzekielElliott) pic.twitter.com/xqu8ZvkKuO