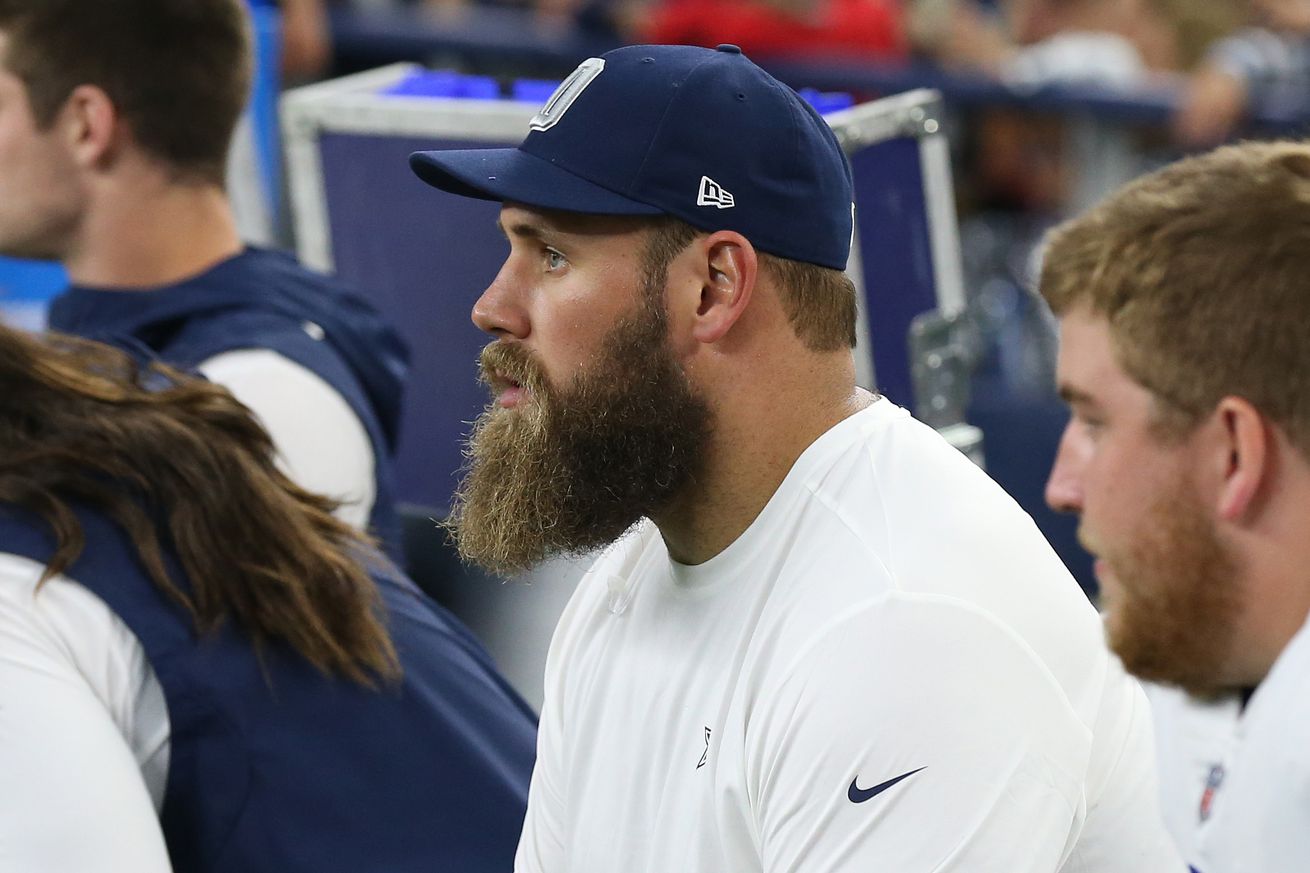 We got your Cowboys news fix covered.

How do Travis Frederick and Jason Witten look in their comebacks with the Cowboys? – David Moore, SportsDay
Activities around The Star have increased recently and Monday two well-known names were back together at Cowboys headquarters.

Two players who failed to take a snap for the Cowboys last season have been active on the practice field in recent days.

Travis Frederick and Jason Witten didn’t play in 2018 for vastly different reasons. Frederick was leveled by Guillain-Barre syndrome, an autoimmune disease, in training camp. Witten retired a little more than a year ago for a spot in the Monday Night Football booth.

“It’s been great,” head coach Jason Garrett said of Frederick’s return. “He’s done so well. Toward the end of the year he started feeling better and better, and he’s been able to go through our entire offseason program up to this point.

”He was on the field with the guys last week so it was good to see him out there, in his stance, running football plays. He looks really good. Again, he’s an outstanding player and an outstanding person. We’re excited to get him back.”

How D-Ware Wants To Help Contending Cowboys – Rob Phillips, DallasCowboys.com
The Cowboys have a full stable of young edge rushers, maybe a former Cowboys’ legend could lend a helping hand.

DeMarcus Ware believes the Cowboys are primed for Super Bowl contention, and he wants to help.

Not as a player – the Cowboys’ all-time sack leader remains retired since the end of the 2016 season – but as a pass-rushing consultant of sorts.

“I always say I want to teach the championship mentality,” he said. “If I could come here at least two or three days a week, teaching them Wednesdays and Thursdays, teach the pass rushers how to pass rush, stopping the run – but then I always help the offensive line, like (left tackle) Tyron Smith, with their technique (too).”

Dez Bryant posts first route on his comeback trail – Grant Gordon, NFL.com
The Cowboys’ all-time leader in touchdown receptions had a forgettable 2018, never taking a single NFL snap. But Bryant posted some good news Monday and I’m sure Cowboys’ Nation is rooting to see him back catching touchdown passes (against anyone other than Dallas).

Dez Bryant is back — running.

The former Pro Bowl receiver posted video of himself on Instagram Monday coming out of a stance, making a cut left, catching a pass and falling to the ground before popping back up.

The three-time Pro Bowler played eight seasons for the Dallas Cowboys, but hasn’t played in an NFL game since the 2017 season.

Sean Lee is returning to the starting lineup – Clarence E. HIll Jr., Fort Worth Star-Telegram
Are you like me? Does the thought of Sean Lee, Jaylon Smith and Leighton Vander Esch together manning the linebacker position give you goose bumps? Well, there’s a very good chance that’s exactly what we’ll see come September. The Cowboys plan for Lee to man the starting strongside backer position in the upcoming season.

The strongside linebacker mainly plays on running downs so it will still limit Lee’s exposure in hopes of keeping him healthy for a full season. He has missed 14 games over the last two seasons.

The Cowboys still plan on using Lee to spell Vander Esch and Smith.

Lee got the promise to start when he decided to come back at a reduced salary. His base salary was slashed from $7 million to $2 million with the possibility of making some of it up in play-time incentives.

But it also spoke to how much he wanted to continue playing after contemplating retirement.

Michael Irvin wasn’t sure about Cowboys hiring Kellen Moore as OC, then Ezekiel Elliott started to change his mind – Kate Hairopoulos, SportsDay
Kellen Moore has gone from being somewhat maligned by Cowboys fans to being their hopeful savior. Well, fans weren’t the only ones experiencing a change of heart. Michael Irvin was skeptical at first as well. He and Jerry Jones spoke about it recently.

Jones has emphasized this offseason that the staff, including head coach Jason Garrett, is committed to fresh ideas on offense. Some will wonder, though, how much the offense can evolve if Garrett, a former play caller, is still ultimately in charge. Jones said he feels good about Moore’s new role because Garrett is there if a “wheel comes off.”

“It’s important to me that Jason Garrett is, if you will, sitting here as a safety net relative to the nuts and bolts of the offense,” Jones said. “And so it was a great opportunity from my perspective to take a unproven, if you will, a young Kellen Moore, surround him with really fresh ideas, surround him with a team that has worked with him … and then let them come together.”

2019 NFL Draft revealed final haul for big trades – Will Brinson, CBSSports.com
A look back at trades that saw first-round picks changing hands determines both the Cowboys and Raiders came out winners in the Amari Cooper deal.

Cooper was the second big-name player shipped out of Oakland last year. The Raiders ended up sticking with all three original draft picks in Mike Mayock’s first run as GM and apparently got the top three players the Raiders front office wanted. (Everyone says that, but it really did feel like this worked out well for Oakland based on their board.) Abram is a heat-seeking missile who can help address the Raiders defensive woes, a guy who huddled up with Jon Gruden and his coaching staff during the Senior Bowl despite being on the opposite roster. The Cowboys bragged all offseason about watching Cooper highlights instead of tape on first-round picks; if their offense is as productive as it was after integrating Cooper down the stretch, this will look like a win for them in a big way, as long as they don’t have to make Cooper the highest-paid receiver in the NFL or anything. I’m fine calling it a win both ways given where these teams stood/stand/will be standing next year.

Many owners hide their feelings toward their players. Jerry Jones does not.

”Do we want Zeke in the foreseeable future on the Dallas Cowboys? The answer is yes,” Jones told a Dallas radio station in January. “That’d be madness to think any differently.”

But Jones was quick to differentiate between what he wants and what is possible.

“Hell, I want a bigger boat,” the man with a 357-foot yacht said. “The question is: Do you have the resources or do you have a plan to get there?”

Dallas may not have Elliott in their plans. The team just shelled out $65 million guaranteed for defensive end DeMarcus Lawrence and still needs to sign quarterback Dak Prescott, wide receiver Amari Cooper, and cornerback Byron Jones to long-term contracts. Even if the team lets Jones go, Dallas’s precarious cap situation will make it difficult to give Elliott the contract that he’ll likely command..