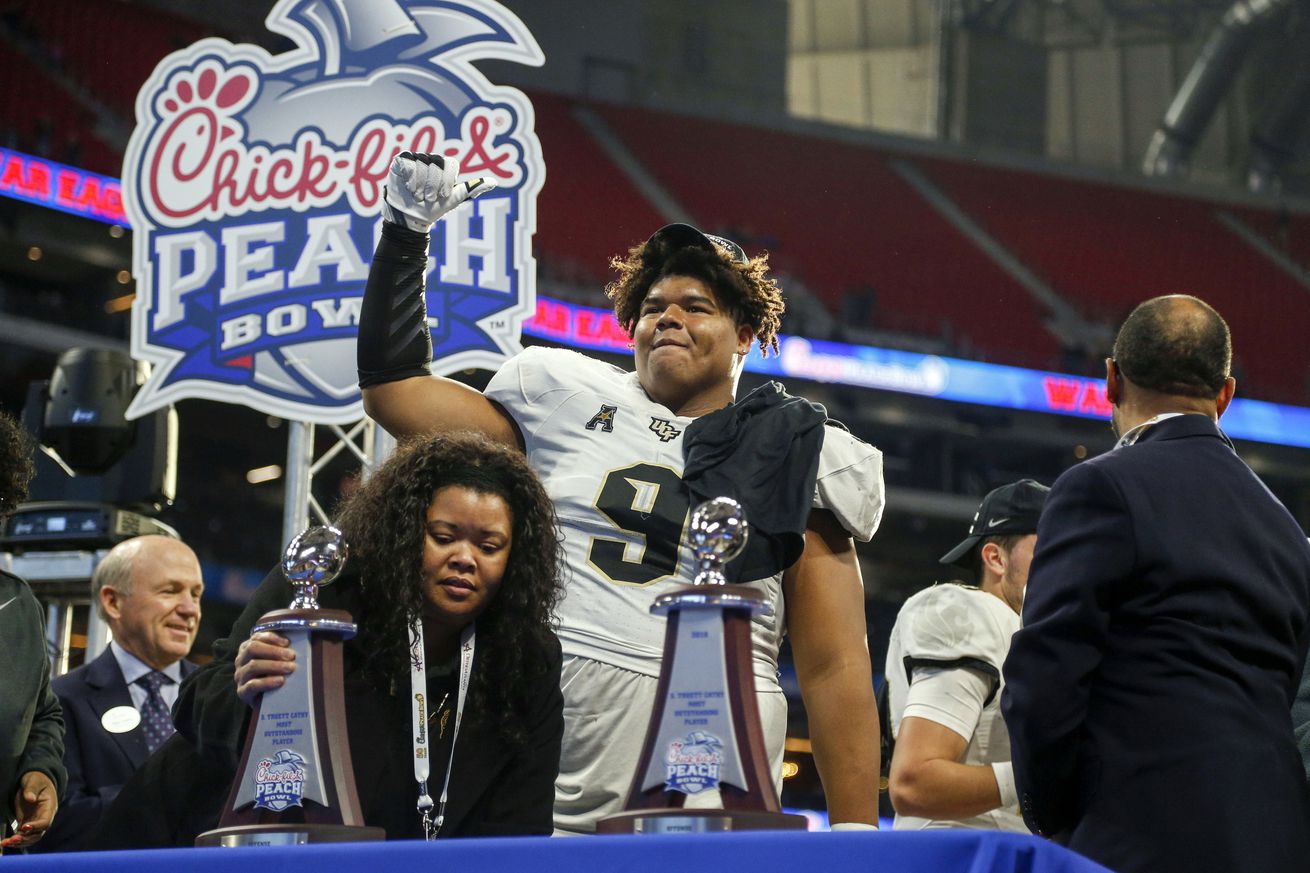 A look at the Cowboys draft picks in a holistic way.

We haven’t even had our first look at the Dallas Cowboys rookie class, but everybody is offering opinions about it. Of course, all the draft hauls around the NFL are being similarly judged. And the evaluations are all over the place. A few teams get mostly panned or praised, but most have a range of takes.

There are some well known problems with the early grades. It starts with the “early” part, as in “way too”. We will not really know how these picks pan out for at least two to three years. Jaylon Smith is a great example. His selection was almost universally viewed as a waste of a premium draft spot on someone who might never play a down in the NFL. No one is talking about that now, as he has become half of arguably the best off-ball linebacking duo in the league, alongside Leighton Vander Esch – who also was widely criticized as being a very poor value when he was selected.

Another major issue with the premature draft critiques is that, for the most part, they reflect some kind of big board thinking. A given player was ranked at 138 on a board, so being taken at 63 by team X is clearly a reach. The problem is that those big boards are the very definition of generic, with no real attempt to match up the particular strengths and weaknesses of the person with the scheme and philosophy of the team and its staff.

That is where the title of this article comes from. Smith and Vander Esch are one great example of how players many teams didn’t value as highly as the Cowboys were extremely valuable for Dallas, especially when the synergy of putting them side-by-side came into play. Another is the de facto first-round selection of the Cowboys this year, Amari Cooper. The Oakland Raiders, or perhaps we should say Jon Gruden, just did not see much worth in keeping him, especially when the Cowboys were willing to pony up that first-round pick. But Cooper came in and not only jump started the Dallas offense, he pretty much saved the season for them.

So here is a look at the Cowboys first three picks, the so-called “premium” rounds they had without that first-rounder, and how they fit specifically for what the team is trying to do.

Full disclosure: I was one who was somewhat disappointed they passed on a safety like Juan Thornhill. I was not too surprised, however, because just like they did with Vander Esch last year, the Cowboys were signalling that they were very high on Hill. Especially defensive coordinator and line coach Rod Marinelli, who just about spent every moment he could communicating and even visiting with HIll.

Still, that led to a lot of opinions like this one from ESPN on the biggest needs that were unaddressed in the draft.

The weak link on Dallas’ defense last season was the secondary, especially at safety. Jeff Heath allowed the second-most broken tackles a year ago and isn’t much better at coverage. The Cowboys added George Iloka on a one-year deal, but he’s a stopgap solution at best. They missed out on long-rumored crush Earl Thomas, as well as Landon Collins, Tyrann Mathieu and the rest of a robust free-agent market.

It seemed like a near-guarantee Dallas would use a pick in this deep safety class to improve the position, adding either a thumper in the box to replace Heath, or a safety with range to allow Xavier Woods to play closer to the line. The Cowboys did add Texas A&M’s Donovan Wilson late in the sixth round, but he’s more likely a special-teams prospect at best, and isn’t guaranteed to even make the 53-man roster. They seemed to actively avoid the position for much of the draft; top prospects Nasir Adderley, Taylor Rapp and Juan Thornhill all came off the board within five slots of Dallas’ first pick, defensive tackle Trysten Hill. Dallas will be counting on Woods’ continued development and hoping either Heath or Iloka perform better than they did in 2018 as the Cowboys try to defend their NFC East title.

That certainly has some validity, but it also ignores what Hill did address: The way the Marneilli defense feeds off a high-motor, high-efficiency 3-tech that adds significant pressure from the interior of the line. Hill is seen as exactly that. Maliek Collins is a good 3-tech, but Hill is believed to be a possible upgrade. Besides, Marinelli uses a lot of rotation with his linemen to keep them fresh. Collins has had some issues staying healthy the entire season, and last year, the Dallas line looked worn down by the latter part of the season. That really came back to haunt them in the loss to the Los Angeles Rams in the playoffs, as we saw them absolutely shredded by the Rams’ run game.

Addressing those issues was likely not only the driving factor behind Hill’s selection in the second round, it also led to the day three picks of Joe Jackson and Jalen Jelks. They had already taken some steps in that direction in free agency by acquiring Christian Covington and Kerry Hyder as well.

Correct or not, the Cowboys approach on defense is that pass rush is the foundation, with a complementary run defense. There is no better example of what they seek than DeMarcus Lawrence, the big signing so far this offseason. Lawrence terrorizes quarterback, and has an outstanding ability to track down and snuff out runs. He just needs more help, and Hill looks like exactly that. Taking a defensive tackle over a safety was not ignoring their biggest need. They just had a different view of that need than outsiders.

There was one big surprise pick, and that was taking an offensive lineman in the third. Given the past investments in the offensive line, and the optimism the team has about Travis Frederick and the reshaped physique of Connor Williams, there was certainly a bit of “What???” when McGovern’s name was called.

But as the video of the decision to send his card up revealed, the team was high on him, and a bit stunned he was available at pick 90. In particular, Jason Garrett was all but shouting at Stephen Jones “We love Connor!” while the team was considering a last minute trade offer for the spot.

This is the other side of the philosophy of the trenches being the foundation of the Cowboys. With Frederick still recovering from his GBS and the struggles the team still had at times last season, they clearly felt it was worth it to shore up the line. And it offers them options for 2020, when they may well lose La’el Collins to free agency. McGovern is almost certainly a pick whose real value will not show until two or three years down the road. But as noted above, they have been doing pretty well with some of those kinds of moves. Look for McGovern to make some significant contributions during his time in Dallas.

Pollard, on the other hand, is a player whose contributions could well start immediately. He is not a starter, but a role player for both the offense and special teams, where he is penciled in as the kick returner. He is projected to fill the same role they envisioned for Tavon Austin when they traded for him last year. Austin was hampered by injury, and likely also by the much-discussed shortcomings of former offensive coordinator Scott Linehan.

Now, Linehan’s replacement Kellen Moore has not one but two dynamic and explosive players that can be moved all over the formation (assuming Austin stays healthy). And Pollard may have more to offer, since he also has more ability as a runner. If Moore is given free reign and shows the hoped-for creativity with the offense, then Pollard can have an outsized impact for the number of plays he is actually on the field. His presence on the field doesn’t have to tip whether the play is a run or a pass, which is something the team truly needs. And once he gets his hands on the ball, he can do some serious damage.

His selection looked like it was really designed to help Moore make things work. It is one more example of how the unique situation of the Cowboys drove things, something that does not always show up in the outside critiques. But some, like ESPN’s Todd McShay, caught a glimpse of what Dallas was up to.

Pollard is super versatile, and Dallas is going to use him all over the place. He’s going to line up in the slot. He’s going to contribute in the run game, taking some of the load off Ezekiel Elliott and getting reps on third down. And he’s going to play a big part in the return game, which needs a lot of work. Pollard averaged 30-plus yards per kickoff return over three seasons and took seven to the house. He has limited punt return experience, but he could theoretically factor in there as well.

He has size, speed and vision. If Dallas gets him going downhill, he’s going to do some damage. Pollard is typically a one-cut-and-go back, but he’ll show patience in waiting for the hole and then the acceleration to pull away. And he fits nicely with the Cowboys’ zone-blocking scheme. Expect him to make an impact in multiple phases of the game.

These three picks may have been a real waste for some teams. But for the Cowboys, they look like great fits for what the team is trying to do this season. That makes them potentially very valuable.

We will have to see. Still, there is a lot of reason to hope they will work out.