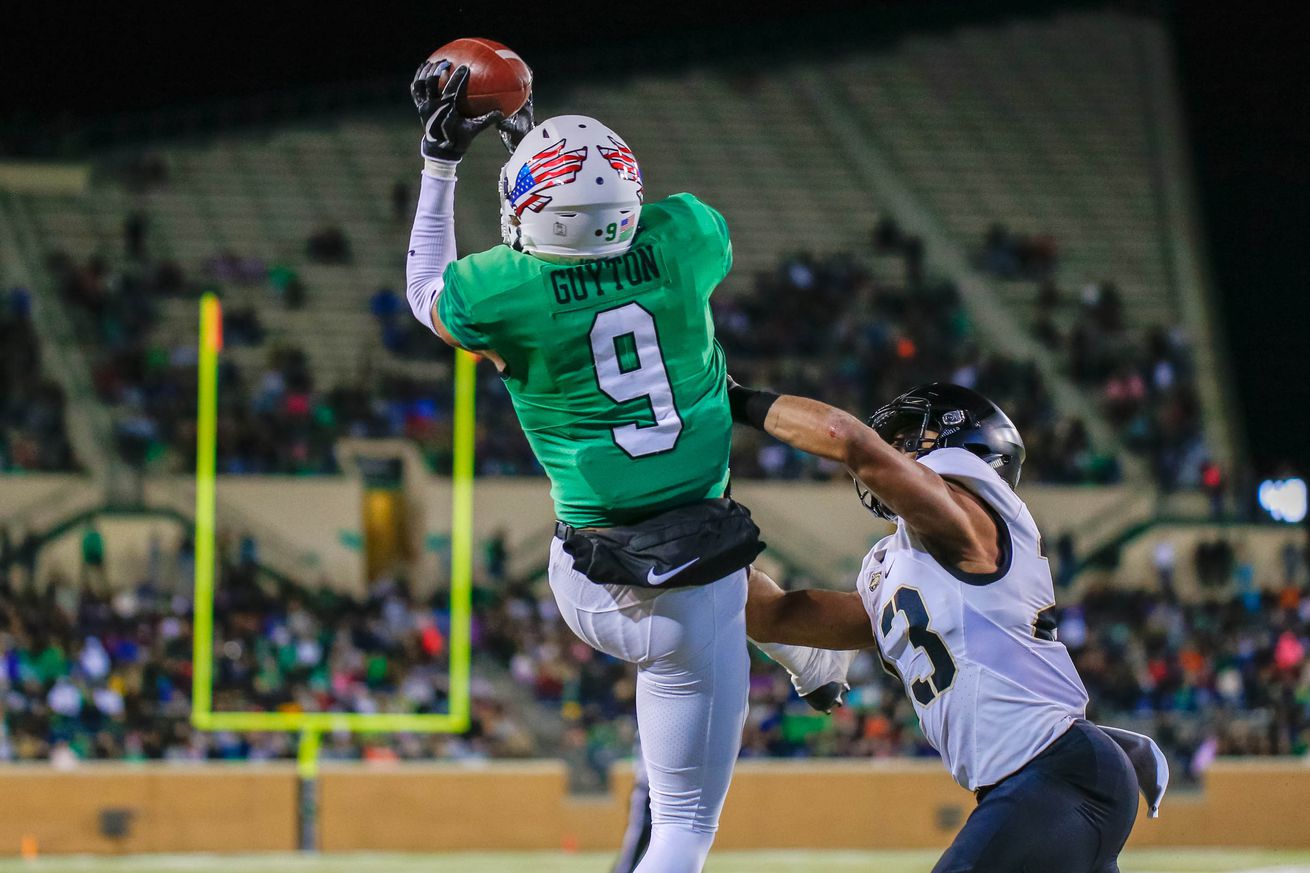 Broaddus, of the mothership gives a look into of day one of Cowboys rookie-minicamp.

I am finally getting used to Sanjay Lal working with these receivers the entire practice without using a ball. Lal’s attention to detail is impressive when it comes to teaching these receivers how to execute routes — from the number of steps they take, to the proper knee lift coming off the ball. I was impressed with how quickly Jalen Guyton, Jon’vea Johnson and Reggie Davis were able to pick things up. Guyton especially caught my eye with how powerful he looked. Watching him live you can feel him exploding out of his cuts. There is a lot of power in the way he moves.

David Helman of the mothership gives a look into the UDFA process from the view of Mitch Hyatt.

“I’m just happy to be here, just to have the opportunity to come out and show what I can do,” he said Friday.

Hyatt enters The Star as one of the prized members of this undrafted class – one of the seven free agents the Cowboys had draftable grades on. That’s not surprising considering his resume, and it’s also not surprising to hear that Dallas wasn’t the only club that wanted to sign him.

“I received a fair amount of calls. It was a pretty chaotic five to 10 minutes for me,” Hyatt said. “I had a whole bunch of people in my ear. But I knew what kind of team the Cowboys were, I knew what they were about.”

Report: Cowboys have signed all of their draft class except for Connor McGovern, RJ Ochoa, Blogging the Boys

The Cowboys have signed all draft picks, except for third-round pick, Connor McGovern.

There once was a time where rookies signing their contracts with the team that drafted them was of serious interest. Who was able to reel in what, how much was guaranteed, the usual so on and so forth.

Under the new CBA (amazing how we still call it “new”), these things are really a formality. There are obvious and supremely rare exceptions like Joey Bosa with the Chargers, but more often than not it’s just a matter of everyone being in the same room and swiping a pen.

Speaking of Bosa, he played his football at The Ohio State University. The Dallas Cowboys drafted a Buckeye recently, running back Mike Weber. He and a few other of his draftmates (in fact all but Connor McGovern) have begun their contractual partnership with the team as they’ve officially signed their rookie deals.

Cowboys’ plan: Get other running backs involved so Ezekiel Elliott can be fresh for playoff run, Jon Machota, Sports Day

The Cowboys used multiple day three draft picks on running backs in the 2019 NFL draft, do they have a plan in store for how to use all of them?

The two-time rushing champion had 304 carries last season, which was 43 more than any other NFL player. He also caught a career-high 77 passes, fifth-most among all running backs.

To help manage Elliott’s touches, the Cowboys used a fourth-round pick on versatile back Tony Pollard last month. They also drafted a more traditional back in Mike Weber in the seventh round.

”We understand what Zeke is to our football team and to our organization and to our success,” running back coach Gary Brown said after Dallas’ first rookie minicamp practice on Friday at The Star. “I think it’s important for us as an organization to make sure that we can maximize his ability to help us go out and win championships. The way to do that is to take a little off of him. We got to make sure we take care of that guy.”

Second-round pick Trysten Hill is coming to the Cowboys with some baggage, but it sounds like he’s ready to mature into the “right kind of guy”.

What there is no question about is Hill’s passion for football and connection with defensive coordinator Rod Marinelli, which is why the Cowboys took the talented pass rusher amid questions about a falling out with the coaching staff during his final season at UCF in 2018 when he started just one game and didn’t play much in the bowl game.

He is considered the perfect fit for the three-technique tackle in Marinelli’s 4-3 scheme that made Warren Sapp into a Hall of Famer in Tampa Bay because of his quick first step and ability to disrupt the pocket.

But it was his relentless effort and love for the game that sold the Cowboys and Marinelli on Hill as he spent his 21st birthday going over plays in a budget hotel in Orlando.

”We were in the hotel lobby actually. On my birthday, yes sir,” Hill said. “We just hung out in the lobby. It was my 21st. We were there and talking football, talking drills and everything like that. I’m not really used to nice hotels. But coach said it was a little shack. It was run down. We had two little chairs pulled up to a table.

”But that doesn’t make the difference. That’s the experience that I’m happy to look back at and say that I spent my 21st with my coach.”

Tony Romo didn’t quite make the cut at The Byron Nelson, but he’s happy with his overall performance.

Romo’s 74 left him at 8-over for the tournament and well off the cut line to play the weekend in a PGA Tour event for the first time, but the former Dallas Cowboys quarterback shot his best round in his third sponsor’s exemption over the last two years.

”I think more than anything, I got a sense to be able to hit a lot of high-quality shots under what is a pressure situation for me,” Romo said. “That’s encouraging and shows that the work you’re doing holds up when it counts. And from there, you just got to find the little things that allow you to keep things going and not derail a round. Just small stuff, technique-wise, but we’re coming on.”

Romo hit nine of 14 fairways and 11 greens Friday after hitting just six fairways and eight greens in Thursday’s first round. He shot 40 on the back nine Thursday and was even par on Nos. 10-18 on Friday (his first nine), including a 17-foot birdie on the par-5 14th hole.

NOT BIG ENOUGH FOR THE BOTH OF US: CAN COWBOYS CARRY 3 QBS? – Kevin Brady, Inside the Star

With Dak Prescott, Cooper Rush, and Mike White the only quarterbacks on the roster heading into OTA’s, will the Cowboys continue to keep three QB’s?

The actual debate this summer will be about who is backing Prescott up, and will come down to a battle between Cooper Rush and Mike White.

Once an undrafted free agent, Rush earned the backup role in 2017 by beating out now-offensive coordinator Kellen Moore during the preseason. His play was far superior, and Rush even had some fans wondering if he was their next Tony Romo-like diamond in the rough at quarterback.

The Rush hype weathered down quickly, though, as he struggled mightily during the 2018 preseason playing behind a make-shift offensive line. Simply put, he wasn’t good, but he was consistent enough to keep that QB2 job for the 2018 season.

Now, however, it appears to be Mike White’s turn. Or at least that’s likely what the coaching staff is hoping for. White is a former fifth round pick, and came to Cowboys Camp with a hype train of his own, due in-part to the Dallas media’s pre-draft love for his game. White was rather disappointing during the preseason as well, though, and never took the job from Rush the way fans had hoped.

Larry Allen Jr., Larry Allen Sr’s son will be in rookie camp with the Cowboys. Here’s Allen Jr. reflecting on the opportunity.

“‘How ‘bout them Cowboys!’ That’s the first thing he shouted over the phone,” Allen Jr. said.

The son of arguably the greatest offensive lineman in franchise history is now trying to make the 2019 roster as a rookie free agent. The work begins at this weekend’s rookie minicamp here at The Star in Frisco.

As he walks the hallways, Allen sees his father’s image in various photographs. He was there for some of those moments as a child — standing on the sidelines, visiting the team locker room.

“Sometimes I’m just focused on trying to prepare and everything,” he said, “and then the next moment I’ll turn the corner and see something and it kind of feels dream-like again. It’s very surreal.”

Will these moves give the Cowboys the push to make the big dance?

Arguably the biggest move the Cowboys made this offseason was the hiring of former Cowboys quarterback Kellen Moore as offensive coordinator. When rumors started surfacing that he was the favorite for the job, fans didn’t seem very excited about the possibility. But then current players and former players started to voice their loud support for him.

Now that he’s got the job, he needs to make this offense his own. He’s a former quarterback, a former Cowboy and has a good relationship with Dak Prescott. Moore can bring a lot to this offense once he gets comfortable in his new position.