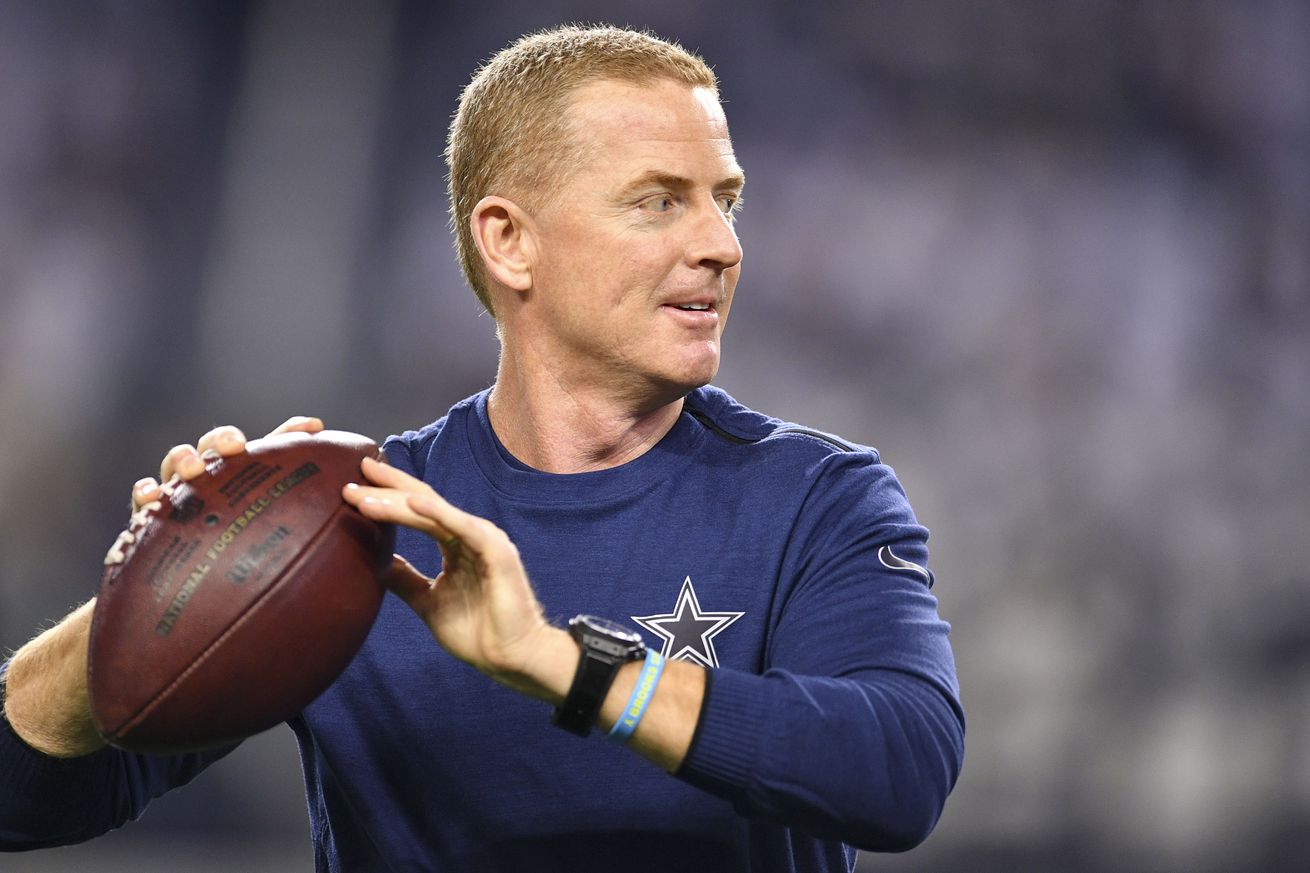 Jason Garrett’s roots are in the Air Coryell scheme, but what does that actually mean?

When the Cowboys officially made the decision to move on from Scott Linehan and find a new offensive coordinator, a lot of fans were hopeful that it would be someone from outside the organization that could bring in an offensive system similar to the prolific offenses of the Rams, Chiefs, and Saints.

In the end, the Cowboys stayed in-house and promoted quarterbacks coach Kellen Moore to offensive coordinator, which seems to strongly suggest that Dallas believes it has the correct offensive scheme in place, but they just want a new play-caller to mix in some creativity and unpredictability. That means that the Cowboys won’t be overhauling their scheme, which has its roots in what’s known as Air Coryell. In order to first understand what Moore might bring to this offense, there must be an understanding of Air Coryell.

It has often been said by many that there are three basic offensive schemes: the West Coast offense, the Erhardt-Perkins offense, and the Air Coryell offense. The reality is that in today’s NFL, every offense has elements of these three schemes incorporated into their playbooks, but there are distinct differences in verbiage and philosophy between the three. The Air Coryell is named so because of Don Coryell, who became the first head coach to ever win over 100 games at both the college and professional level.

Before we get into the history of Air Coryell, it’s important to note that the Cowboys definitely employ elements of other schemes. It’s been reported that they are using some concepts from the Erhardt-Perkins offense, but much of that is likely centered around terminology more than underlying philosophy. The Cowboys still derive much of their scheme from their Air Coryell past.

Coryell’s offense began in the college ranks when he was the head coach at San Diego State, where he coached from 1961 to 1972. At the time, most football offenses at both levels operated solely out of a pro set which typically used 21 personnel, or lining up with two wide receivers, one tight end, a running back, and a fullback. These offenses heavily utilized the running game, but Coryell ended up creating his innovative offense more out of necessity than anything else:

“We could only recruit a limited number of runners and linemen against schools like USC and UCLA,” he recalled. ”And there were a lot of kids in Southern California passing and catching the ball. There seemed to be a deeper supply of quarterbacks and receivers. And the passing game was also open to some new ideas. Finally we decided it’s crazy that we can win games by throwing the ball without the best personnel. So we threw the hell out of the ball and won some games. When we started doing that, we were like 55-5-1.”

And so Coryell began to implement an offensive scheme that focused more on the passing game than running the ball. Whereas most offenses used the pass play to pick up bigger chunks of yards than a run play could in necessary situations, such as third and long, Coryell began to use the pass as the primary method of moving the ball. This involved a lot of different routes that receivers could run and Coryell placed an emphasis on timing with these routes, asking quarterbacks to throw to an open spot and have the receiver run into that path after the ball was thrown.

Coryell also frequently tried to stretch the defense, with his core philosophy being to make the defense cover every inch of the field, especially vertically. This typically resulted in the offense lining up in 11 personnel, with three wide receivers, one tight end, and one running back. This was at a time where it was uncommon to use three wide receiver sets. Coryell also asked his tight ends to run routes that receivers usually run, as opposed to the dig and hitch routes most tight ends exclusively ran. Additionally, the running back could also come out of the back field and run routes.

The offense that Coryell developed in San Diego would frequently feature at least two deep-threat receivers running deep routes, whether it be fly routes, deep in routes, skinny posts, comebacks, and other designs to pick up big yards. In addition to those routes, Coryell sent his three remaining skill players out into the intermediate areas to function as the checkdown options, as the first two reads were always deep shots. Later on, Coryell began to introduce more receiver options on routes that allowed receivers to react to what the defense was doing.

In addition to the passing attack that went vertical while stretching out horizontally with tight ends and running backs, Coryell sought to establish a strong power running game up the middle. Coryell preferred to run between the tackles and frequently employed various different protections from the offensive line to accomplish this.

Returning to the city of San Diego, where Coryell’s offense originally began, the style of play had become known as the West Coast offense by coaches and players alike due to it being created in San Diego. However, a few years after Coryell had been coaching the Chargers, Sports Illustrated did an article covering Bill Walsh’s offense with the San Francisco 49ers – which used a lot of shorter passing options with regularity – and referred to it as the West Coast offense. The name stuck, and Coryell’s offense began to be referred to as the Air Coryell ever since.

Coryell’s offense with the Chargers was where things really took off. He had quarterback Dan Fouts, who had only thrown more than 300 passes once in his five-year career at that time. During his time in the Air Coryell, Fouts never threw less than 330 passes a year and averaged 451 pass attempts per year. Fouts’ primary two targets under Coryell were wide receiver Charlie Joiner and tight end Kellen Winslow, and in Coryell’s second season with the Chargers the team became the first AFC Western division champion to throw the ball more than they ran it.

Also at this time was the implementation of the Mel Blount rule, which established that defenders couldn’t contact eligible receivers past five yards from the line of scrimmage. At this point, Coryell began to implement pre-snap motion into his offense frequently to avoid defenses from jamming receivers, as well as helping the quarterback to make better pre-snap reads given how dependent the Air Coryell is on timing and execution.

Coryell’s offense and its basic philosophies have become commonplace in the NFL and several coaches throughout time have created their own versions of it. For example, one of Coryell’s closest coaching assistants was Ernie Zampese, who coached at San Diego State and later with the Chargers under Coryell, holding a variety of roles that included being the offensive coordinator. Later on, Zampese became the offensive coordinator for the Los Angeles Rams in the late 80’s, where he taught the tenets of the Coryell offense to his wide receivers coach, Norv Turner. Of course, Turner then became the Cowboys offensive coordinator in 1991 and implemented his own variant of the Air Coryell with Troy Aikman, Emmitt Smith, Michael Irvin, and Jay Novacek.

Afterwards, Turner became the head coach of the Washington Redskins and Zampese replaced him in Dallas. While with the Redskins, Turner tutored his quarterbacks coach at the time, Mike Martz, in the ways of the Coryell offense. After three years under Turner, Martz became the offensive coordinator for the Rams under head coach Dick Vermeil and installed his own version of the Air Coryell that became known as the Greatest Show on Turf. Martz became the Rams head coach and after five years was fired, at which point he became the offensive coordinator for the Detroit Lions under Rod Marinelli, where he coached quarterback Jon Kitna.

Additionally, when Zampese and Turner were running their Air Coryell with the Rams in the late 80’s, their offensive line coach none other than Hudson Houck, who was coaching in the NFL for the first time in his career. It was at this time when Houck’s input on the blocking scheme was mixed in with the Air Coryell, which has become a staple of the Cowboys offenses and many Air Coryell variants since.

Furthermore, when Turner and Zampese were running the Air Coryell in Dallas to the success of three Super Bowl victories, backup quarterback Jason Garrett was taking note. When he became the Cowboys offensive coordinator in 2007, he implemented his own variation of the Air Coryell, having added his own wrinkles to the offensive philosophy. Over Garrett’s time running this offense, he has changed a lot with his scheme, and that’s something we’ll be taking a look at next, as it will help inform us on what Moore’s version of the offense might look like.

But for now, this serves as a genealogy of the Air Coryell, what it is, and how it’s become so entrenched as the overarching offensive system with the Cowboys.