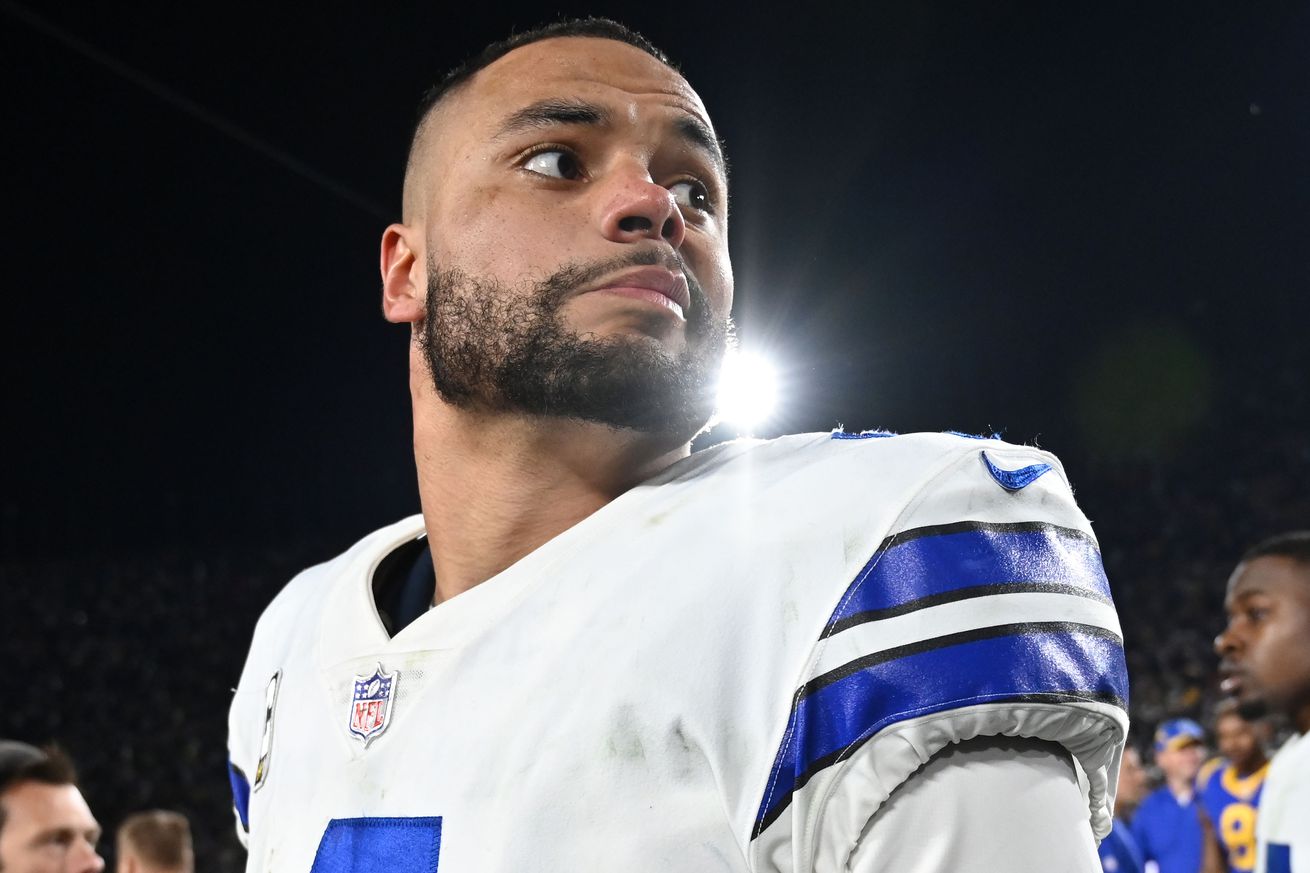 Plus, other Cowboys news.

Film room: With the help of Jon Kitna, Dak Prescott is one of 3 Cowboys who could improve considerably in 2019 – John Owning, SportsDay Dallas

Jon Kitna was brought in by the Cowboys to help Dak Prescott take the next step and clean up his fundamentals, most notably his footwork. Luckily for Prescott, Kitna comes from a background of emphasizing footwork which should pay dividends for the quarterback.

Kitna does not like it when his quarterbacks throw from a base akin to riding a bicycle — too narrow — or, in Prescott’s case in the play above, throwing from a base akin to riding a bull, when it’s too wide and inhibits his ability to properly generate force from the lower body. That leads to power-drainage issues and is the reason Prescott short-hopped his pass to Beasley.

While it’s impossible to know the specific content of the teachings from Prescott’s previous position coaches, it appears safe to assume that none of them focus on footwork as much as Kitna does.

While Prescott may never be the most pinpoint accurate passer in the NFL, more consistent and correct footwork will enable him to be more accurate throughout the season, only increasing his effectiveness and productivity as a passer.

As Dak Prescott’s agent continues to work towards getting the quarterback a monstrous extension, the Cowboys are hoping Prescott’s play moves to an elite level that will match the contract he’ll eventually sign. Kitna seems to think Dak is already on his way there.

“He already has an elite mindset,” Kitna said of Prescott. “He doesn’t want to just be good enough, or very good or great. He wants to be elite. He wants to be the best. He wants to eliminate anything that he sees as a weakness. He wants to get better at it. His drive is what sets him apart, I believe.”

“Fortunately for me as the QB coach, he wants to be elite,” Kitna said. “He wants to be the best. He comes out every day wondering, asking the whys – why am I doing this? What do you want me to do this for? He wants to know how it connects and how it’ll help him become an elite player for a long time.”

Kris Richard enters his second year as the defensive backs coach and defensive passing game coordinator, and he’s brought with him the signature preference for bigger cornerbacks that made the Seahawks defense so dominant. But could that preference impact the way Dallas handles their young corners’ expiring contracts?

Awuzie hits the height requirement, but his arms do not. Brown and Lewis fall short on both counts.

It’s been widely speculated that Lewis’ physical limitations have contributed to his lack of playing time under Richard. He made seven starts and played 70 percent of the Cowboys’ snaps in 2017, but those numbers dipped to just one start and 18 percent of the snaps last year.

So what does that mean, exactly? It’s hard to say. The Cowboys fielded a solid secondary last year, as Jones made his first career Pro Bowl, while both Awuzie and Brown handled themselves well. It’s clear that Richard can make things work with corners that don’t fit his preferences.

But how will that impact the Cowboys’ future decisions? Jones and Brown are in contract years, while Lewis now figures to be competing with guys that stand 3-5 inches taller than him.

The Cowboys were hailed by many for the moves they made in the offseason that filled several holes on the roster. But the most important move they made might have been adding Robert Quinn.

I believe it was the trade for Robert Quinn. I’m not saying he’s going to be the guy who had 40 sacks in three seasons with the Rams 5-7 years ago. But I do think he gives the Cowboys their best 1-2 defensive end punch they’ve had in a while. So much attention is going to be headed in DeMarcus Lawrence’s direction that I think Quinn could end up coming close to his first double-digit sack season since 2014.

Earlier in the offseason it was discovered that Tyrone Crawford was involved in a bar fight that could potentially lead to legal issues. Those issues came forward Tuesday, as it was announced that Crawford is being charged with a misdemeanor that could affect his availability with the Cowboys.

Per an affidavit, Crawford was charged with affray at Coyote Ugly in Panama City Beach on March 15. Crawford was accused of throwing a punch at an individual and instigating a fight. After being removed from the bar, Crawford also hit and threw punches at security personnel and charged at a police officer restraining one of Crawford’s party members.

The police report was filed on March 20 and a summons was issued to Crawford the following week.

Crawford has a pre-trial hearing scheduled for June 13.

The defensive tackle, 29, is entering his eighth season in the league. Crawford has two years left on a five-year extension he signed with Dallas in 2015.

The Cowboys took Mike Weber with the intent of him being the more traditional backup to Ezekiel Elliott, while Tony Pollard looks primed for a more unique role. But Weber’s immediate future is questionable after he injured his knee, although the rookie won’t be getting surgery yet.

Per the team’s website, Weber will be out of action for the near future and the team hopes that rest will be enough for him to get back into action without much delay. If the injury does not heal on its own, arthroscopic surgery will be considered.

While the more high profile changes to teams’ coaching and front office staffs happen in January and February, there are usually several changes to scouting departments that occur once the NFL draft has concluded. The Cowboys are feeling that now, as two of their scouts have departed for the Oakland Raiders.

Walter Juliff is leaving the Cowboys to join Mike Mayock’s staff, the Cowboys announced on their website. The Raiders hired Jim Abrams, formerly the Cowboys’ West Coast scout, as their director of college scouting last month.

Juliff was the only person in the scouting department who pre-dated Jerry Jones’ purchase of the team.

Juliff joined the Cowboys in 1988. He held various jobs in the scouting department, including assistant director of college and pro scouting, southeast scout and national college scout.

Cowboys Garrett: ‘The business side will take care of itself’ – Mike Fisher, 247 Sports

Even though the Cowboys managed to reach a contract extension with DeMarcus Lawrence, they still have plenty of other young stars they need to re-sign, most notably their offensive trio of Dak Prescott, Ezekiel Elliott, and Amari Cooper. But Jason Garrett doesn’t appear to be worried about the challenges of re-signing everyone.

And really, in a way, it doesn’t “take care of itself.’’ Part of what Jason Garrett is saying is that its unwise for the coach to bother dabbling in any of it.

“It is professional football, and that’s always a part of it,’’ [Garrett] said. “The best teams I’ve been around are ones where players are able to say, ‘I need to focus on this; I need to focus on football, playing my best, and all of that stuff will take care of itself.’ We have a team made up of the right kind of guys. We spent a lot of time trying to build this team the right way, bringing the right kind of people to our organization, and they handle those situations really, really well.”