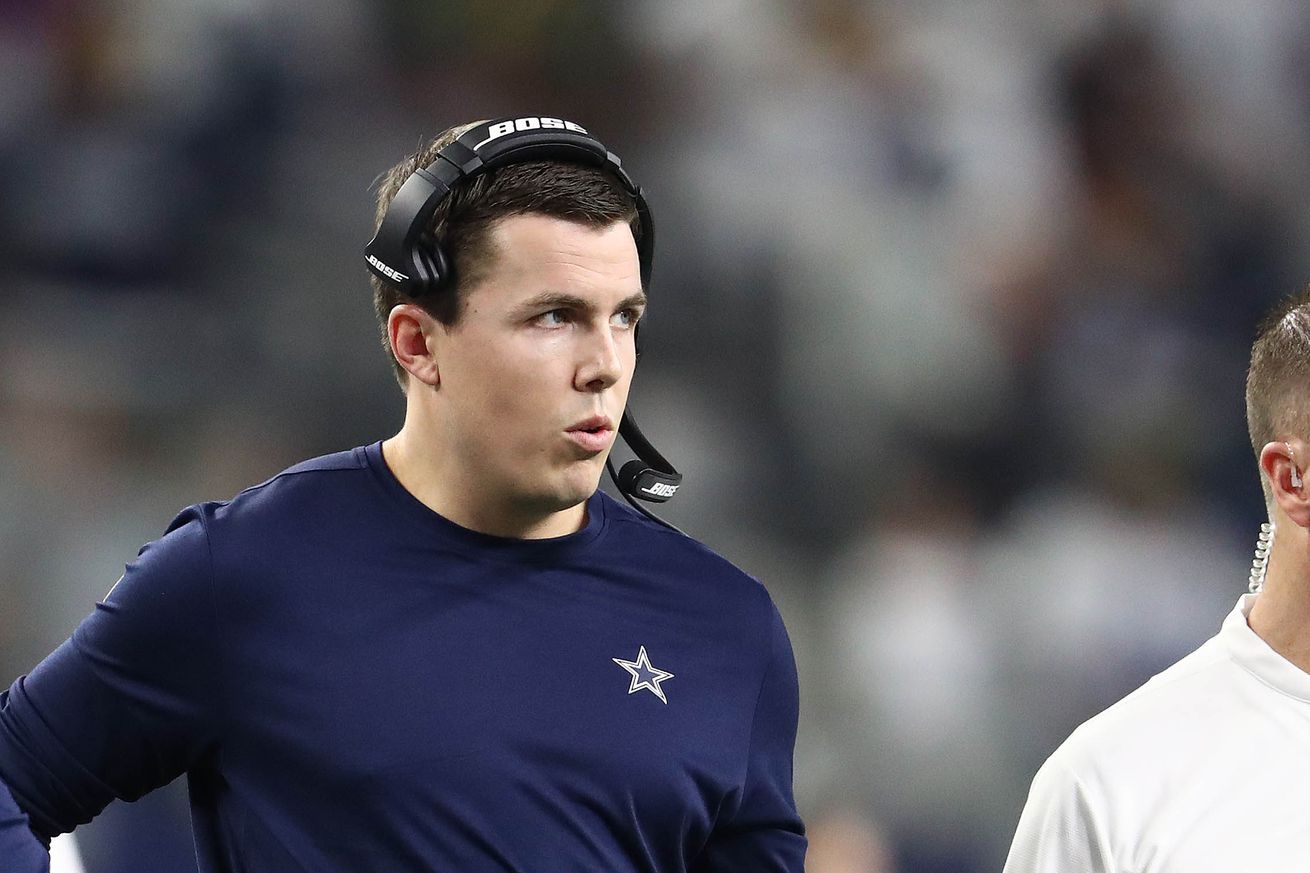 The Dallas Cowboys have been an up-and-down offensive team over recent history. There have been some years when they were among the league-leaders in important offensive categories, and others when they were mediocre at best. Personnel has changed on the field in that time as there has been turnover at quarterback, running back, wide receiver and tight end (well, at least for one year at tight end). The offensive line has also seen its share of change. Some of this is the result of injury, some the result of Father Time and some the result of poor performance. But through it all, at least over the last four years (five if you count 2014), there was one constant, Scott Linehan as offensive coordinator.

2018 was the breaking point for the Cowboys and Linehan as the offense cratered until Amari Cooper arrived to revive it, but even he couldn’t solve all of the problems. Key to the dissatisfaction was the feeling of staleness that had invaded the the offense, and Linehan’s inability to embrace new concepts that many of the best offenses were using. He was the proverbial old man telling the young kids to stay off his lawn. It felt like if he was asked, he probably would have railed against the newfangled fads in culture like Snapgram or Facechat. Simply put, there was a feeling among many that the game had passed him by.

So what did Dallas do? They “mutually” parted ways with Linehan and went with the new kid on the block. Kellen Moore will be 31 one years old when the season starts and has exactly one year of coaching experience under his belt. Jason Garrett is rolling the dice, but as we’ve discussed before, Moore represents a bridge between old and new. The Cowboys basic scheme will not change under Moore. They are not ripping up their offense and starting from scratch.

If that’s the case, how ill it be different? Moore recently gave us a hint.

“I think the beauty of our current roster is we have a lot of versatility,” Moore said. “We have guys that can kind of line up in a lot of different places.

”Hopefully we can be multiple and present things in different ways, and at the end of the day, still have our foundation and our philosophy. You can run similar plays, just out of a lot of different looks.”

As has been speculated, the Cowboys will still look like the Cowboys when it comes to many of their plays. Certainly Moore will add some new plays to the mix, but you can expect the majority of the offense to look the same post-snap. It’s pre-snap that seems to be getting a lot of the attention. Moving players around, pre-snap motion, formations that disguise intent. This is where the Cowboys hope to improve their production, by causing confusion among the defense and opening up their playmakers to more opportunities.

Running back Tony Pollard has become the symbol of the Moore Approach – a guy who you can line up almost anywhere among the skill positions on offense and he he produces. He represents the Cowboys offense moving into the 21st century of many.

Moore is emphasizing that this will be a collaborative approach, and that collaboration will extend to the players.

And something that has the players most excited is the belief that Moore will be open to utilizing some of their suggestions.

”At the end of the day, work together with everyone,” Moore said. “I think that includes the coaching staff, obviously coach Garrett and the rest of the staff. I think you also got to get some input from the players. It doesn’t mean you have to go down those roads all the time, but I think it’s important that when a player believes in something and they’re pretty [convinced] on it, usually they find a way to make it work.

”I think it’s a collaborative effort. It includes everyone. That’s part of this thing. We just got to get on the field together and start doing stuff, and then things evolve and take it where you want to take it at that point.”

Moore is not that far removed from his playing days. He knows what if feels like as a player to want your input heard and respected. Maybe the players were no longer feeling that under Linehan. The story of Amari Cooper and Dak Prescott changing a play that led to a long touchdown during last season may be emblematic of frustrations players were feeling under the old offense.

One of the more incredible plays that Cooper had against Philadelphia was his 75-yard touchdown. The Cowboys were in need of a scoring drive and Cooper made that quite easy. After the game he discussed the play and how it actually only happened thanks to Dak Prescott.

“It’s interesting because I actually had another stop route on that play and they were, if you were watching, really sitting on those stop routes. And I was like, this is ridiculous. So when I broke the huddle I was kind of mad and I was like, Dak come on. And he was just like, just run it bro. And I guess he thought about it again and he kind of signaled a go route and I was elated when he did that. And I took off, caught the ball, and scored.”

We’ll see if these things come to pass under the tutelage of Kellen Moore. In the offseason, everything is possible and optimism can reach its peak. When the team takes the field is when things will get interesting and speculation will turn into hard data.

Will the wunderkind produce?