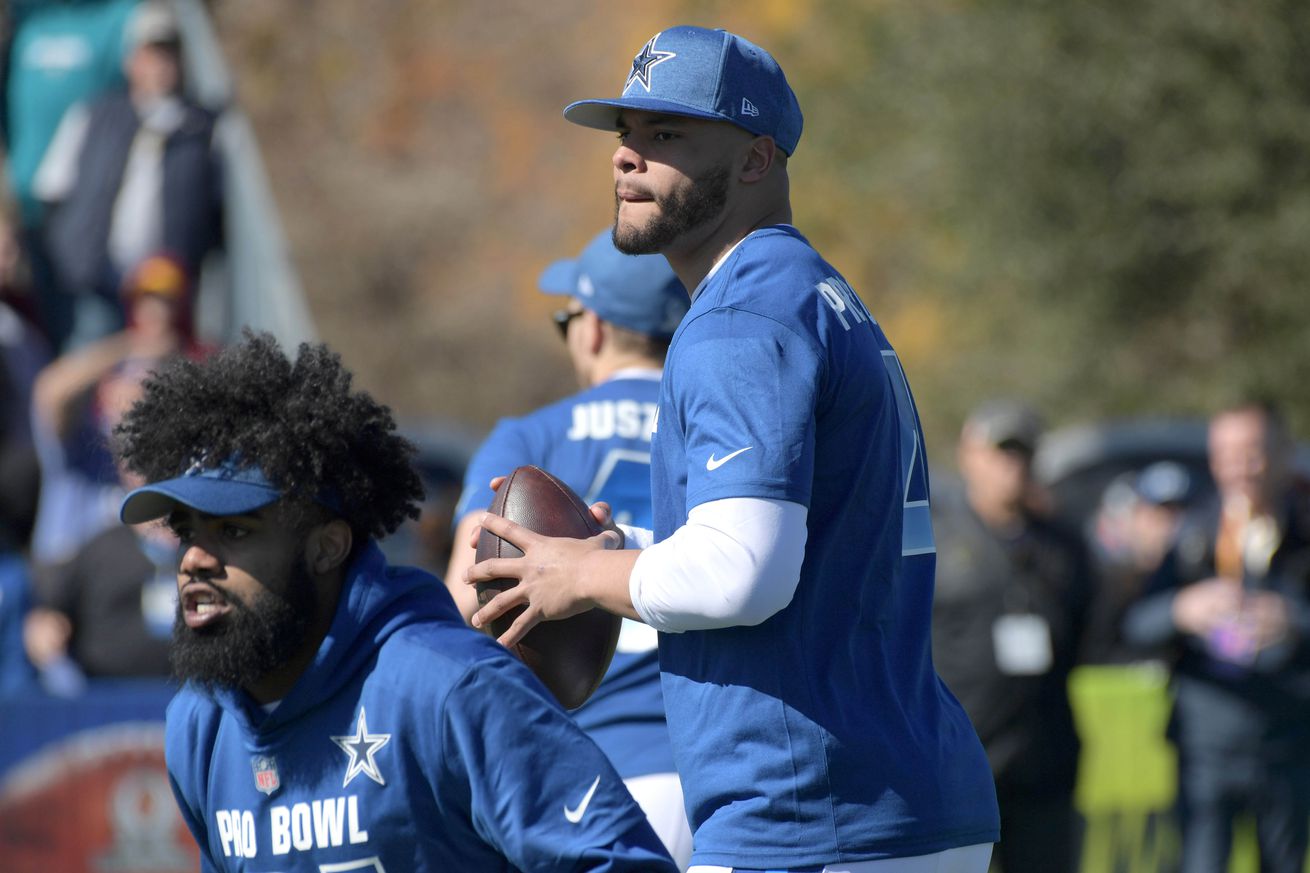 Continuing the conversation on future contracts for the Cowboys’ top players.

How Should NFL Teams Build Around the $30 Million Quarterback? -Robert Mays- The Ringer
The two emerging methods: Pay everyone & having no wiggle room or stripping the roster down to the studs.

Even after including Prescott’s projected new salary in the mix, the Cowboys would still likely have between $50 million and $60 million in cap space next season (without factoring in any other extensions). The problem for Dallas is that Prescott’s is far from the only high-profile contract decision on the horizon. Cornerback Byron Jones, wide receiver Amari Cooper, linebacker Jaylon Smith, and offensive linemen La’el Collins are all entering the final year of their deals, and word is the Cowboys would like to retain as much of that core as possible. And though Ezekiel Elliott won’t hit free agency until 2021, an extension is inevitable, and the team could choose to get that done before next season to bring down his 2020 cap number.

Take all those contracts into account, and that cap space disappears in a hurry. If the Cowboys do retain Cooper, Jones, Elliott, and either Smith or Collins, they’ll probably already be tight against the cap in the first or second year of Prescott’s deal, with around eight players counting for at least $10 million in 2020 (including Prescott and recently extended DeMarcus Lawrence, who’ll be checking in at more than twice that much).

“I mean, I want to be a Cowboy forever,” Prescott said Wednesday night at Dr Pepper Ballpark, where the quarterback and his teammates were raising money for the Salvation Army through the Reliant Home Run Derby. “I think the people that are doing the deal feel the same way, so to me, it’s no rush. I know it will get done.”

Prescott is set to make $2.02 million in the final year of his four-year rookie contract that he signed after the Dallas Cowboys drafted him in the fourth round in 2016.

How Dak Prescott, Ezekiel Elliott, and Amari Cooper can all get paid -RJ Ochoa- Blogging The Boys
A plan for spreading the Cowboys money around.

There’s a common misconception that locking them all down (with Byron Jones and others to follow) might land the Cowboys in “cap hell”, but Corry agrees that there’s no armageddon-like situation facing Dallas should they indeed get their stars under new contracts. It bears mentioning that the Cowboys have an enormous amount of cap space on the horizon, almost more than anyone in the league.

“Dallas doesn’t run the risk of getting back into salary cap hell like in the early part of the decade and the late 1990s with the triplets as a major part of the future. There are a little over $115 million of cap commitments in 2020 (36 players under contract). Only three teams, the Bills, Dolphins and Texans, currently have fewer 2020 cap obligations. Even if the cap starts becoming tight, the Cowboys have consistently been willing to aggressively manage the cap where multiple contracts are restructured to free up space.”

We could very soon be living in a world where Dak, Zeke, and Amari make numbers close to $30M, $16M, and $18M annually. That sounds like a big pill to swallow, but it’s just a normal day in the NFL.

Inside the film room: Analyzing the Cowboys’ red-zone problems and how they can improve –Bob Sturm- The Athletic
It’s time for the Cowboys to get creative, especially in the red zone.

Too many drives died in that red zone, and I think this is clearly why the Cowboys moved on from Scott Linehan in pursuit of someone who might have a better idea of how to pull them out of that rut. They finished the 2018 season 32nd in the NFL in 1st-and-goal touchdown efficiency (scoring a touchdown on a drive where you earn a first down inside the opponent’s 10 yard line – not to be confused with scoring on 1st and goal) and 29th in red-zone touchdown efficiency.

Considering the substantial investment Dallas has made in its offense and the amount of assembled talent, they should never come close to ranking down by the Jets, Cardinals, Jaguars and 49ers. If they can win their division and a playoff game with a team this wasteful on offense, it would seem like the sky might be the limit if they consistently add seven points from up close at a league-average rate.

How Jason Witten views his role in return to Cowboys- DallasCowboys.com
Jason Witten is excited to be back on the football field and in some ways feels like a rookie all over again.

In some ways, Witten’s brief retirement probably felt like an eternity — wrestling with the realities of a football life inside a broadcast booth, no longer between the hashmarks.

“It was a long nine months away,” he said.

In other ways, like rejoining a locker room that still contains many of his old teammates, the return is seamless.

Ezekiel Elliott: Dallas Cowboys hope to keep him fresh for playoff run- Jori Epstein-USA TODAY
Ezekiel Elliott has had a lot of carries in his three years in the league but the Cowboys plan to lessen the load to keep the reigning rushing leader fresh for the playoffs.

Elliott has led the league in rushing yards per game each season since the Cowboys drafted him fourth overall in 2016. But along the way, he’s raced to more than 1,000 regular-season touches across 40 games. So Cowboys management want to exercise caution with a player whom they say they’ll extend to a contract resembling the Rams’ four-year, $60 million ($45 million guaranteed) extension of Todd Gurley.

Elliott is “a guy we want to have here long term,” executive vice president Stephen Jones said last week of Elliott. “The only reason you say, well maybe he’s not at the front (of the extension order) is because he’s got this year, then he’s got another year on his tender.

“But Zeke’s every bit as important.”

If Hyder’s pre-injury athleticism returns, he should be the odds-on favorite to beat out Wise and Ross for the last under tackle spot. He’s the best pass rusher of the group and has the strength and hand technique to do his job against the run.

Despite being an undrafted free agent, Wise arrives in Dallas with an adequate amount of hype because he had the talent worthy of a Day 3 pick in this year’s draft. Nonetheless, a lack of bulk for a defensive tackle (6-3, 281 pounds) and below-average athleticism (tested into the 22.2 percentile among NFL defensive linemen, according to Three Sigma Athlete) made NFL teams wary of spending a pick on him.

Dallas Cowboys Linebacker Sean Lee Making A Position Switch-The SPUN
Sean Lee is making a position switch to SAM linebacker and plans to be a key contributor in 2019.

10 Cowboys who should make 2019 Pro Bowl -K.D. Drummond- Cowboys Wire
Which Cowboys have a good chance of making the Pro Bowl in 2019?

The inside linebacker position is one of the more crowded in the league when it comes to the Pro Bowl, so the path in front of Smith is less certain. He could easily have another worthy campaign only to miss out in a numbers game.

That feels like what happened in 2018, but in his fourth year, Smith seems like the perfect candidate to explode. After a redshirt rookie year, he became acclimated to the league and his new reality in 2017. The training wheels were off in 2018 to the tune of 121 tackles, four sacks, and a 69-yard fumble recovery touchdown. He’ll only get better.

Should none of those three return in 2020, the Cowboys could very well put out a starting lineup of Smith, McGovern, Frederick, Martin and Williams from left to right. That’s the likely move if the team is trying to get the best five players on the field, with Hyatt replacing Fleming in the swing tackle role. Williams is the wild card; if he flourishes at left guard, his play and his added bulk could make him less appealing to switch back to the outside. That could leave a void at right tackle, thus making McGovern the inside utility guy if Williams, Frederick and Martin continue to make up the starting interior.