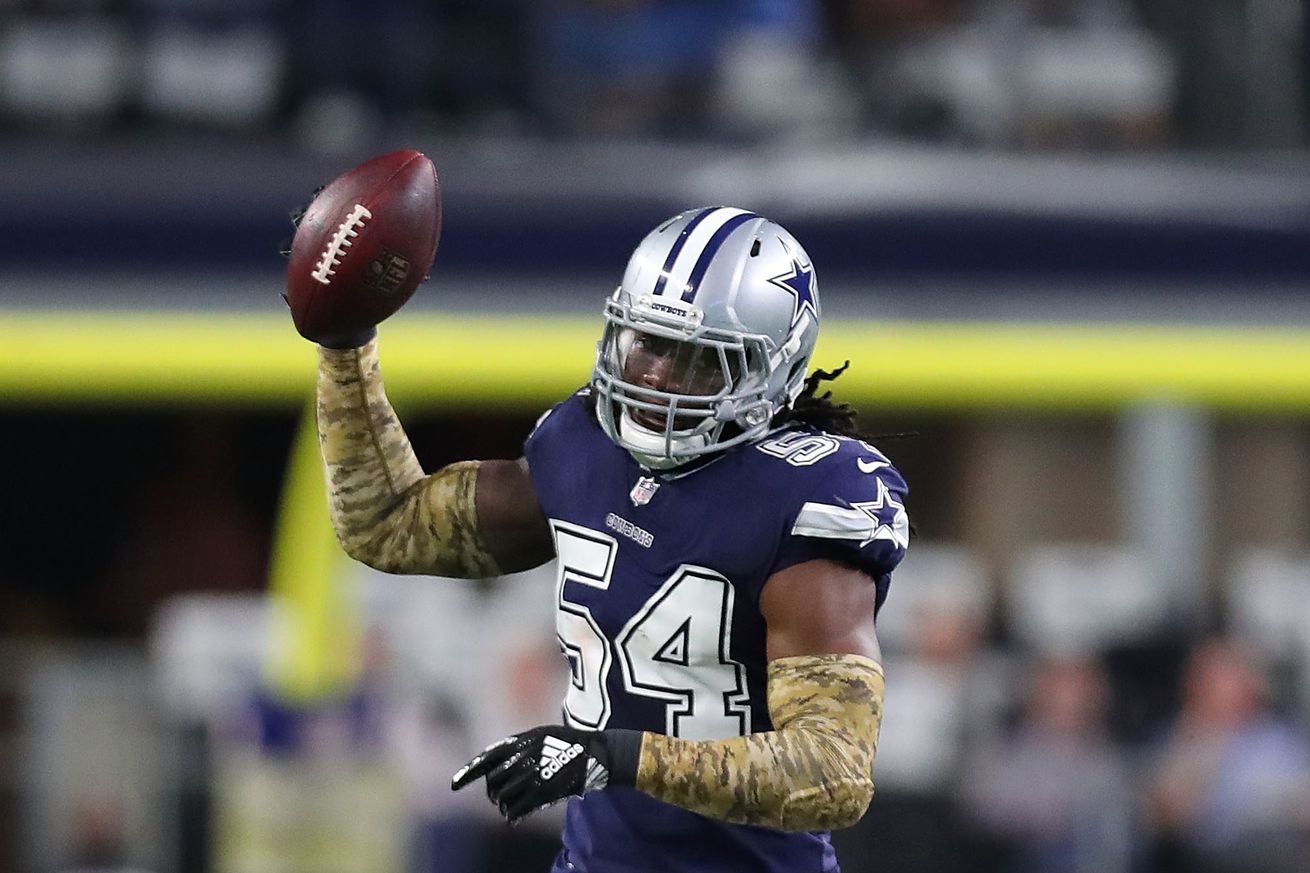 Jaylon showed up on Sundays last year, but today he’ll be doing something a little different.

When Dallas Cowboys linebacker Jaylon Smith walks across the stage at graduation Sunday at Notre Dame, it will be the fulfillment of a promise he made to his mother three years ago. He said he would return to earn his college degree when he left college early to join the NFL Draft.

It was no easy task but Smith has already done the impossible on the field, so he wasn’t about to shy away from taking 21 hours to get his degree. The classes included: Critical pedagogy, Latino studies, Latino muralism, Philosophy of human nature, and Intro to poetry.

“You name it, I took it,’‘ Smith said. He also didn’t forget his day job, as he found time to work out with the Notre Dame football team to stay in shape. “I mean, you know, it was a great experience, for sure,’‘ Smith said.

With so many other mouths to feed, what are the repercussions of extending Smith?

What would a Smith contract mean for the rest of the team?

Smith won’t cost nearly as much as Prescott or Cooper, but he’ll be a significant investment. That could spell trouble for All-Pro running back Ezekiel Elliott and Pro Bowl cornerback Byron Jones. It won’t be impossible to fit multiple of those three players under the cap — even after signing DeMarcus Lawrence to a $105 million deal — but the Cowboys may prefer flexibility for when they eventually need to lock up Vander Esch to a big deal.

Elliott, in particular, will command a lot of money, likely in the neighborhood of Le’Veon Bell’s $27 million in guarantees. But there’s plenty of debate about how much running backs are worth, and there are already rumors about Jets head coach/interim GM Adam Gase being upset at Bell’s contract. Do the Cowboys want to invest nearly 10 percent of their salary cap in a running back when they may find an internal replacement after drafting a pair of backs last month? The Cowboys may still retain Smith and Elliott, but it speaks volumes that Smith may be the next in line to earn an extension.

3 goals for Jaylon Smith in 2019 with the Cowboys – Skyler Carlin, Clutch Points

How can Smith build upon an impressive 2018 season?

More defensive touchdowns certainly wouldn’t hurt. 3. Force More Turnovers Coming into the NFL, everyone knew the athletic freak that Smith was. Watching his tape at Notre Dame, you could see his potential as an every-down linebacker who could do everything. Last season, we got a glimpse of what Smith could truly be as a linebacker. If there is anything you could critique on Smith’s game is his turnovers. In his rookie season in 2017, Smith only started in six games so it was tough to make a huge impact for him.

Then, last season he wasn’t able to get any interceptions but he was able to recover two fumbles. The young linebacker will want to start forcing more turnovers to give his offense even more possessions. Ezekiel Elliott needs to eat and he’ll be fed more if the defense—along with Smith—force more turnovers in 2019.

When you’re the Dallas Cowboys, it’s an ongoing circus, right? Where do we even start with all the looming drama? Well, actually, it looks like all Bleacher Report could come up with this year is contract extensions.

The star-studded trio that is the Cowboys’ offensive heart needs extensions. Dak Prescott and Amari Cooper are on the final years of their deals. Ezekiel Elliott has an additional season after the team picked up his fifth-year option. Who gets what and when? Executive vice president Stephen Jones has said Prescott and Cooper are up first. But in today’s quarterback market, how much is Prescott getting? He’s thrown 67 touchdowns to 25 interceptions over three seasons, but what is the financial cutoff? And how much for Cooper? He came over from Oakland and put up 725 yards and six scores.

And don’t forget about Elliott in the land of leverage put on by individuals such as Le’Veon Bell lately. Few backs are averaging 4.7 yards per carry over three seasons while handling 868 attempts. These are the questions that will chase the Cowboys all summer.

3. How will Jason Witten look after time off?

Before the start of the 2018 NFL Draft, the Cowboys got some unexpected news as tight end Jason Witten decided to retire and go into broadcasting. He headed to the ESPN booth to call Monday Night Football games, and that didn’t go well at all. After a year of calling games, Witten decided to return to the field and Dallas has embraced him with open arms.

The question is whether or not he can actually help this team in 2019. It’s no secret that Witten wasn’t the same player in 2017 that we all remember from his prime. He had lost a step and was unable to create anything after the catch. Now, he comes back after a full year without playing which makes it possible that he could be even farther from the player he once was.

Witten will surely go down as one of the best, if not the best, to ever play tight end in Dallas. And we all know the team struggled mightily in this area last season. Now, with no additions to the roster outside of Witten, they’re going to be relying on him to do more than he might be capable of. But who knows, maybe he can surprise us all and pull off a great season. Either way, all eyes will be on No. 82 this offseason as he returns from his one-year retirement.

Of course there might not be a bigger storyline to watch than the return of the Cowboys All Pro center.

Frederick missed all of the 2018 season after being diagnosed with Guillain-Barre syndrome, a rare disease that I am not nearly qualified enough to discuss. What I do know is that it can be very serious, and it kept Frederick out for the entire year. The Cowboys offensive line suffered during the early part of 2018, largely due in part to Travis Frederick’s absence. Yes, Joe Looney filled in and played as well as anyone could have hoped for, but the disconnect in communication across the offensive line was clear without their usual center. Especially during the first couple months of the season.

If Frederick is fully back and healthy, his presence alone will take the Cowboys offensive line back towards their peak. Combine his comeback with a healthy Zack Martin, and a now bulked up Connor Williams, and the interior of this line has the chance to be special.

Despite the narratives, Dak Prescott is a very good downfield passer – Cole Patterson, Blogging The Boys

Of course, the biggest concern many have is whether or not Dak Prescott can ever turn into a good downfield passer, however, as our own Cole Patterson states – that doesn’t appear to be an actual problem.

Dak might not necessarily be Patrick Mahomes when throwing the ball down the field, but the numbers do show that Prescott can be very successful when pushing the ball. It certainly helps when you have a target like Amari Cooper to stretch the field, but number four has shown the ability to get the ball there time and time again.

From 30+ yards, Dak Prescott’s stats now look like the following:

Projecting the changes Kellen Moore might make to the Cowboys offense – David Howman, Blogging The Boys

Or if it’s not Dak you’re worried about, maybe it’s that young kid in charge of running the offense.

We won’t really know what Moore will bring to this offense until the first regular season game kicks off against the Giants. However, Moore has the intellectual background from his days at Boise State, as well as the talent on the roster, to create a fast, efficient, high-powered offense that both incorporates the existing philosophies of Garrett’s Cowboys offenses and new concepts from college and other teams around the league. Moore seemingly said just as much over the weekend, too. It’ll be interesting to see how all of this translates to the field for the 30 year old first-time coordinator.

Cowboys have been one of NFL’s best at signing UDFAs. This year’s group has chance to be Dallas’ best in recent memory – Jon Machota, SportsDay

The Cowboys stellar evaluation of talent extends past the guys who were drafted.

This year’s group has a chance of being the team’s best undrafted rookie free agents class in recent memory.

“I think we take it very seriously,” Garrett said. “I don’t know the statistics relative to other teams, but I do know that we’ve had some success with college free agents, and that’s an important part of the whole draft process. “It goes back to everyone having a common vision for what the team should be all about. We preach that, really on a daily basis. These are the kind of guys we want on our team because this is the kind of team we want to have. That applies to what you do in the first round and certainly throughout the draft and free agency.”

Landing UDFAs may just feel like a bonus, but it they start stacking more success on their draft résumé, that just seems unfair.

During Will McClay’s time running the draft process, the Cowboys are averaging 9 picks per year and finding and average of 3 starters per draft. They’ve drafted 5 All-Pros since 2014, an average of 1 per year.