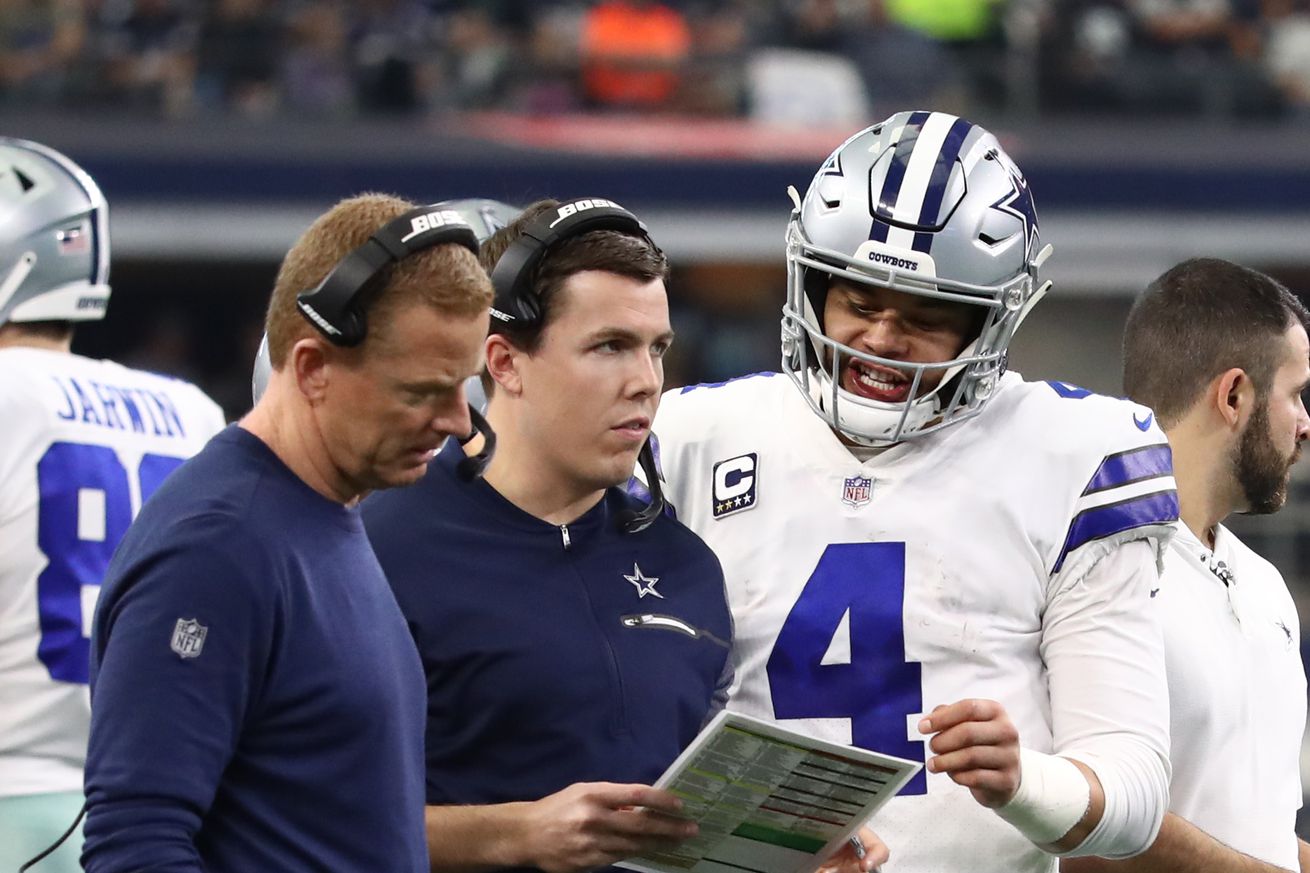 There is a lot we don’t know at the moment about the Cowboys upcoming season, but none of it seems at all insurmountable.

There are tons of questions about the Dallas Cowboys. That is not unusual. Quite the opposite, it is rather normal for most NFL teams when they are still building a 90-man roster for camp (there will be changes for Dallas). Add in coaching changes, which are also something most teams experience at some level every offseason, and there are plenty of what-ifs and alternatives to sort through.

However, there is something a bit different about this season for the Cowboys. Most of the questions seem to be good ones. For many teams, things like “Who is going to be our starting QB?”, “How do we fill the holes left by the departure of so much talent in free agency?”, and “What in the world are Dave Gettleman and Adam Gase doing????” are the focus. Those are just not the kind of things that they are trying to figure out at the Star.

Admittedly, this may be an entirely too optimistic of a take. But it is easy to get this feeling. Here are some of the major things facing the team, and why it does look like things have a good chance of turning out well.

It seems impossible to find anyone who thinks the team would have been better off retaining the beleaguered Scott Linehan. Going with terribly inexperienced Kellen Moore is open to a lot more dissent.

Still, there is more to his fit for the job than many think. Our own David Howman touched on much of this in his look at how Moore can fix the offense. What is really important is that if you want someone to take a really different approach to play-calling while still being able to work with the basic system already in place, promoting from within makes a lot of sense. The second half of that is that Moore had so much inculcation in the kinds of offensive concepts that are all the rage in the NFL. His high-school coach/father was his first teacher, and then he had a master’s class at Boise State. One of the most exciting things in Dave’s article (to me at least) was this quote from a man named Mike Kuchar:

Boise State’s linebacker coach, Jeff Choate, once told me at coaching clinic two years back, “We run plays, we don’t have an offense. It makes it difficult to defend.”

Boise specializes in getting defenses out of position to make plays by utilizing the three major essentials in offensive football: numbers, leverage and grass.

If that doesn’t sound like a cure for what ailed the Dallas offense last year, I don’t know what it would be.

There has been an understandable concern about Jason Garrett wanting to keep too much of the old ways, since he has done so much to design the offense. But as Bob Sturm laid out in a trio of articles at the Athletic (if you have access, this is the third, with links back to the first two) the real issues were play-calling and the offensive line (more about that latter point shortly).

A prediction here: Garrett is going to let Moore have the reins and try to work some of that high school and college inspired magic. And he certainly has the tools.

Although contract extensions are still in the works, the Cowboys have a solid trio of offensive players in Dak Prescott, Ezekiel Elliott, and Amari Cooper. As reported in a post by David Howman, they have been ranked as the sixth best set of “triplets” in the league. Now, preseason rankings are always suspect, but that seems a reasonable take given what we know at the moment.

And it doesn’t stop there. Michael Gallup and Randall Cobb look like a solid WR2/WR3 combo, with some real camp battles shaping up to fill out the rest of the group. Tony Pollard opens up a realm of possibilities with his ability to run effectively in a traditional RB role as well as serving as an excellent receiver from any position.

Then there is the return of Jason Witten. He has been off the field for a year, and is not exactly in the prime of his career. He is also one of the savviest tight ends ever, with a true Hall of Fame résumé. Additionally, he has always been great as a “security blanket” for his quarterbacks, and that is something that should only help Prescott.

Something that is often discounted is the growth of Prescott. Once he got over the aftereffects of the Burning in Atlanta in 2017, he looked a lot more like the surprise star who set the world on fire as a rookie starter. He should just be better this season. Sure, that is purely opinion, but I’m riding with it until proven wrong.

The expected return of Travis Frederick

We still don’t know for sure just how much of the old Fredbeard we will see. All reports have been nothing but optimistic. There is one thing that his bout with GBS didn’t affect at all. That is his knowledge of the game and ability to call protections.

Once he gets the rust knocked off, he will once again be the heart and brains of the offensive line. Joe Looney did yeoman work last season, but he was not as good as Frederick by any stretch of the imagination. And he certainly was not the master tactician we have become accustomed to seeing at center.

Sturm listed the frequent breakdowns of the patchwork offensive line as going hand-in-hand with the play-calling issues, and I think he nailed it. Now, with Frederick on track to return, Connor Williams looking a lot more like an NFL guard, and quality depth added in rookie Connor McGovern, the line looks poised for a return to dominance. If it comes together, it will just make Moore’s job easier.

They got DeMarcus Lawrence signed. They added Robert Quinn in a trade, plus a couple of intriguing free agents. And they invested three draft picks in more talent, with Trysten Hill looking like the prototype for a Marinelli 3-tech. Just to make sure, they also grabbed a highly regarded UDFA to add to the mix.

Last season, the defensive line wore down late in the season. It was glaringly obvious in the playoff loss to the Los Angeles Rams, when they were repeatedly gashed by the run. Look for the Cowboys to go deep on the D line this year and have the fresh players to keep those waves coming. That is the core of Marinelli’s approach, and management has done a superb job giving him the material to work with.

We won’t mention the great “what if” by name, but you all know who I’m talking about. I’m just not going to jinx it.

The biggest question this year in putting together the 53-man roster seems to be whom you have to leave off, not whom you have to keep. A rundown of the players they are likely to take to Oxnard yields several more than 53 players who have a legitimate shot. Here’s a pithy example.

Wanna know how insane the Cowboys depth is on the OL right now?

Jason Witten cited this as one of the reasons he took those cleats down and laced back up.

Coming from a man with 14 prior seasons with the team, plus another studying them for broadcasts, that seems worth noting.

It now appears the team plans to use the veteran linebacker as the SAM in the “base” defense. Just like Frederick, Lee is an incredible football mind, and having him on the field has value far beyond his physical skills, which admittedly have eroded a bit. But as the SAM, he should not face the wear and tear from being out there for almost every snap that usually cost him games during the season.

Oh, did I mention the two other linebackers he will be with? And mentoring?

This just seems like a brilliant way to maximize the General’s contributions without taking any snaps away from what may be the best LB duo in the league. That’s three seek-and-destroy machines that opposing defenses will face. Good luck with that.

This has been heavy on impressions and, well, feelings about the team. In defense, you can’t apply a lot of analytics to the future performance of a team that has had the changes of the offseason. Those numbers are a lot more about what you should do in given situation, or how to construct a roster, than predicting the future.

As always, maybe there is too much optimism here. IDC. This looks like an exciting year for fans of the Star.