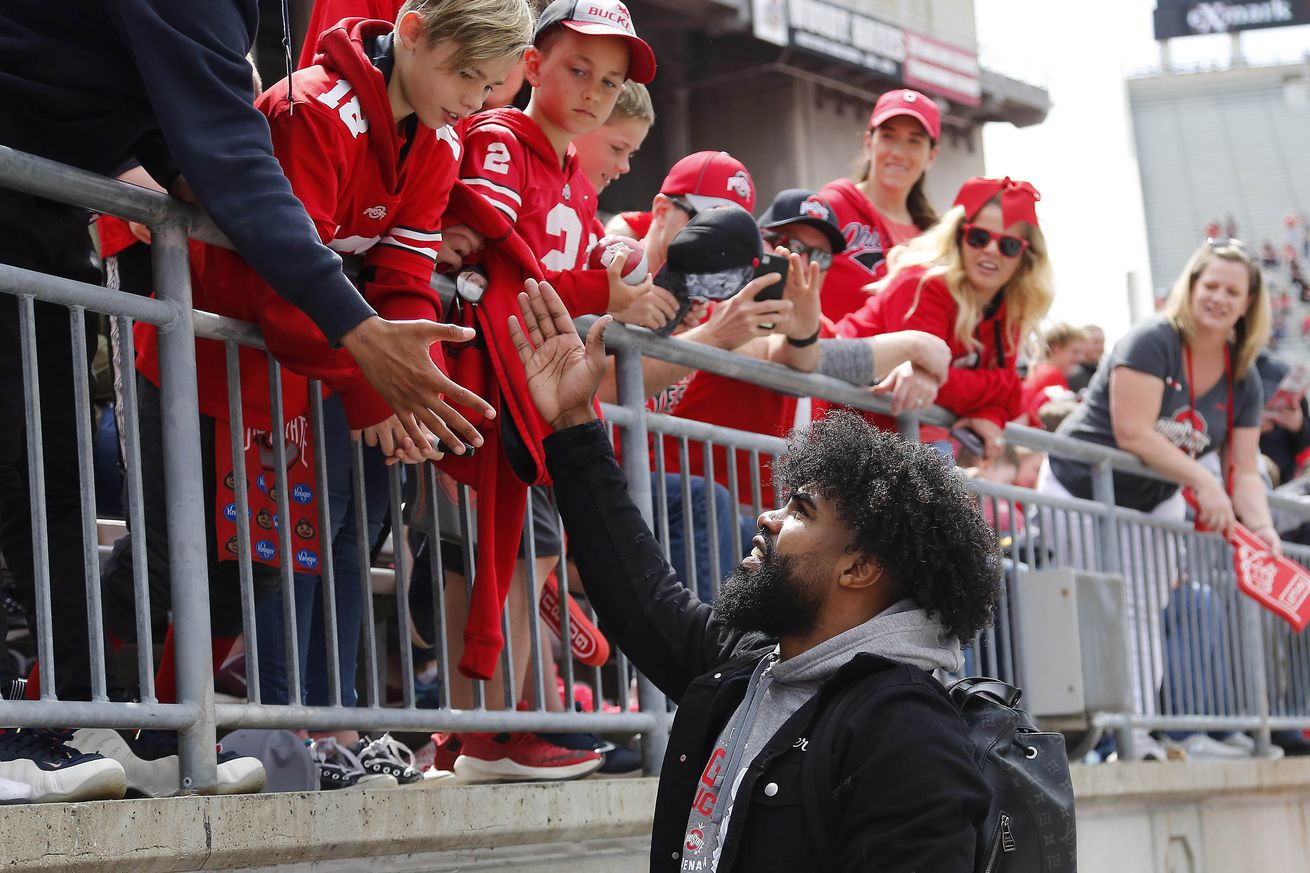 All the Cowboys news that’s fit to print.

It’s not really an offseason without some drama surrounding our Cowboys. All-Pro running back Ezekiel Elliott found his name making headlines of the wrong kind Monday.

Dallas Cowboys running back Ezekiel Elliott was handcuffed and detained but not arrested or charged with any crime early Saturday morning in Las Vegas following an incident at a music festival in which he appeared to shove a security guard to the ground.

TMZ published video that shows Elliott having a disagreement with a woman and following her around a parking lot. The disagreement never becomes physical based on the video clip, but Elliott does appear to impede the progress of the woman as she walks away.

Later in the video, Elliott confronts an event security guard, asking “You got something to say?” He then uses his right forearm to push the guard into a metal railing, prompting the guard to fall over.

Depending upon who you choose to read/believe the Cowboys either don’t think the incident should affect potential contract negotiations….or will continue to “gather information.”

Even as the Cowboys continue to gather information about the incident involving Ezekiel Elliott over the weekend, executive vice president Stephen Jones said it won’t impact negotiations for a long-term contract for the running back.

“It’s so unfair to comment at this point,” Jones said, via David Moore of the Dallas Morning News. “We have nothing but respect for Zeke, and that’s all we can really say at this point.”

Early Saturday morning, Las Vegas police working at a music festival handcuffed Elliott after they observed him shoving a security guard to the ground, TMZ.com reports. The security guard did not want to press charges and officers released Elliott.

Videos surfaced Monday morning of the Cowboys’ All-Pro running back involved in an altercation at a concert in Las Vegas. The video included footage of Elliott being placed in handcuffs, although Cowboys chief operating officer Stephen Jones confirmed he was not arrested.

“What we are aware of is he wasn’t arrested and hasn’t been charged,” Jones said Monday. “We’ll just continue to gather information, and that’s all we can say at this time.”

It had been a quiet offseason for Elliott up to this point. He hosted a youth football camp on Sunday at The Star, and last week he made headlines when he paid for the funeral expenses of St. Louis high school football prospect Jaylon McKenzie.

Travis Frederick is lifting weights, hitting baseballs and running around. It’s a sharp contrast from last September, when he could barely lift his arm over his shoulder due to Guillain-Barre syndrome.

After months of rehab, medications and learning about his illness, there’s now an expectation Frederick will return for Week 1 of the season.

“I feel solid. I’m very cautious and realistic along the way,” Frederick said. “I wouldn’t say it’s an awesome feeling to be back where I am because I don’t know where I am, and I won’t know until August. But I do feel confident in my ability to be at the point where I am, and I’m excited that I get to do all the regular things that everybody else is doing.”

Frederick’s health is more complex than originally thought. He’s nearly recovered from Guillain-Barre and his offseason shoulder surgery, but The Athletic has learned Frederick also had surgery for a hernia. A source said the operation isn’t considered serious and is different than a sports hernia, which occurs when there’s a tear in the abdomen/groin area. And from watching Frederick run around on a baseball field last week during a charity home run derby, it appears he’s on target to play. Frederick hasn’t done any punching with his arms as yet, due to his recovery from shoulder surgery, but outside of that he’s moving laterally and regaining some quickness.

Over at the NFL.com site Gennara Filice checks in with each team and tries to answer one key question.

Dallas Cowboys: Can first-time play caller Kellen Moore give the offense some juice?

Yes, we could spend this blurb exploring the contractual juggling act that’ll be necessary to retain a number of core Cowboys whose bills are coming due. But let’s leave it to the Jones boys to figure out a long-term plan on their own. I’m here to study questions that specifically pertain to the coming campaign. With that in mind, I’d like to examine a pretty significant change that appears to be flying under the radar a bit, at least on the national level …

Two years ago, Kellen Moore was Dak Prescott’s teammate. Last year, Moore was Prescott’s position coach. Now, Moore is Prescott’s play caller. Such familiarity between a new offensive coordinator and his quarterback certainly isn’t a bad thing, though this situation’s quite unique, given Moore’s fast-track voyage up the coaching ranks. Can the 30-year-old boost an offense that finished last season in the bottom half of the league in most statistical measurements, both traditional and new-agey? How differently will Moore call games than his predecessor, Scott Linehan, who has tutored Moore for years, going back to when he first entered the league as an undrafted free agent in Detroit? This is a pressure-cooker assignment for a first-time coordinator (and second-year coach), serving as the offensive nerve center on one of the league’s most high-profile teams.

Could the Cowboys be interested in any of the still unsigned free agents scattered across the league? Maybe, since two of those players play safety – a position many think could still use an upgrade.

Quin played at a Pro Bowl level in 2017 but seemed to fall out of favor upon Matt Patricia’s arrival in Detroit. If he commits to another season at age 33, the 10-year veteran should have no problem finding a taker for his services.

Berry’s health is a total question mark and the reason for this low ranking, but he would bring unquestioned leadership and savvy to any locker room he joins.

Jaylon Smith Is the Dallas Cowboys Star the NFL Should Fear – Brent Sobleski, Bleacher Report
Fourth-year linebacker Jaylon Smith continues to generate national accolades for both his on-field play and his perseverance returning from a potentially devastating injury.

Last season, Smith blossomed. The third-year defender’s 121 total tackles tied for 13th overall. According to Pro Football Focus, Smith’s 27.8 win percentage as a pass-rusher ranked first and his four sacks tied for 10th-most by an off-the-ball linebacker. PFF also noted Smith is one of three off-the-ball linebackers with 95 targets in coverage over the past two seasons to have allowed one touchdown or fewer.

The Cowboys linebacker is already productive. He showed tremendous physical and mental growth in his first three seasons. As he matures, added game experience will make his reads quicker and increase his understanding of opposing offenses.

Smith is developing into the heart of the Cowboys defense, with Leighton Vander Esch flying to the football as the weakside linebacker and veteran Sean Lee moving to the strong side. Quietly, the 245-pound MIKE played 95.3 percent of Dallas’ 2018 defensive snaps—which is amazing considering the extent of his 2016 injury.

Dallas added one of the most physically gifted defensive tackles in this year’s class, Trysten Hill, to play in front of Smith and make the linebacker’s life easier, which should help Smith be more productive in 2019.

How much ‘command’ does Kellen Moore really have in Dallas? – Todd Brock, CowboysWire
Finally, let’s play follow the media trail as the CowboysWire Todd Brock uses quotes from an Ed Werder podcast to question how much influence Kellen Moore actually has.

But Werder went on to suggest Moore may already have enough credibility- with club management, anyway- to warrant a direct line to the team owner himself.

“I think the most interesting statement that we have heard the entire offseason was from Jerry Jones. Jerry Jones not only mandated offensive change and the implementation of new concepts and creative thinking, but he promoted Kellen Moore in a year where he did not extend Jason Garrett- who, oh by the way, his calling card is as an offensive playcaller himself- and he’s again denied this offseason a chance to call plays with his own fate hanging in the balance here. Jerry said [to Moore], ‘Look,’ and he said this publicly, ‘If you and Jon Kitna, if your ideas are not being implemented by the head coach, come to me. Come to me. Circumvent the head coach and come to me, and I will take care of it.’

“He basically told Garrett, effectively, to stand down and, ‘You’re going to work with what these guys want to go with, and that’s who we’re going to be because the way you’ve tried to do it just hasn’t produced the results we want.’”