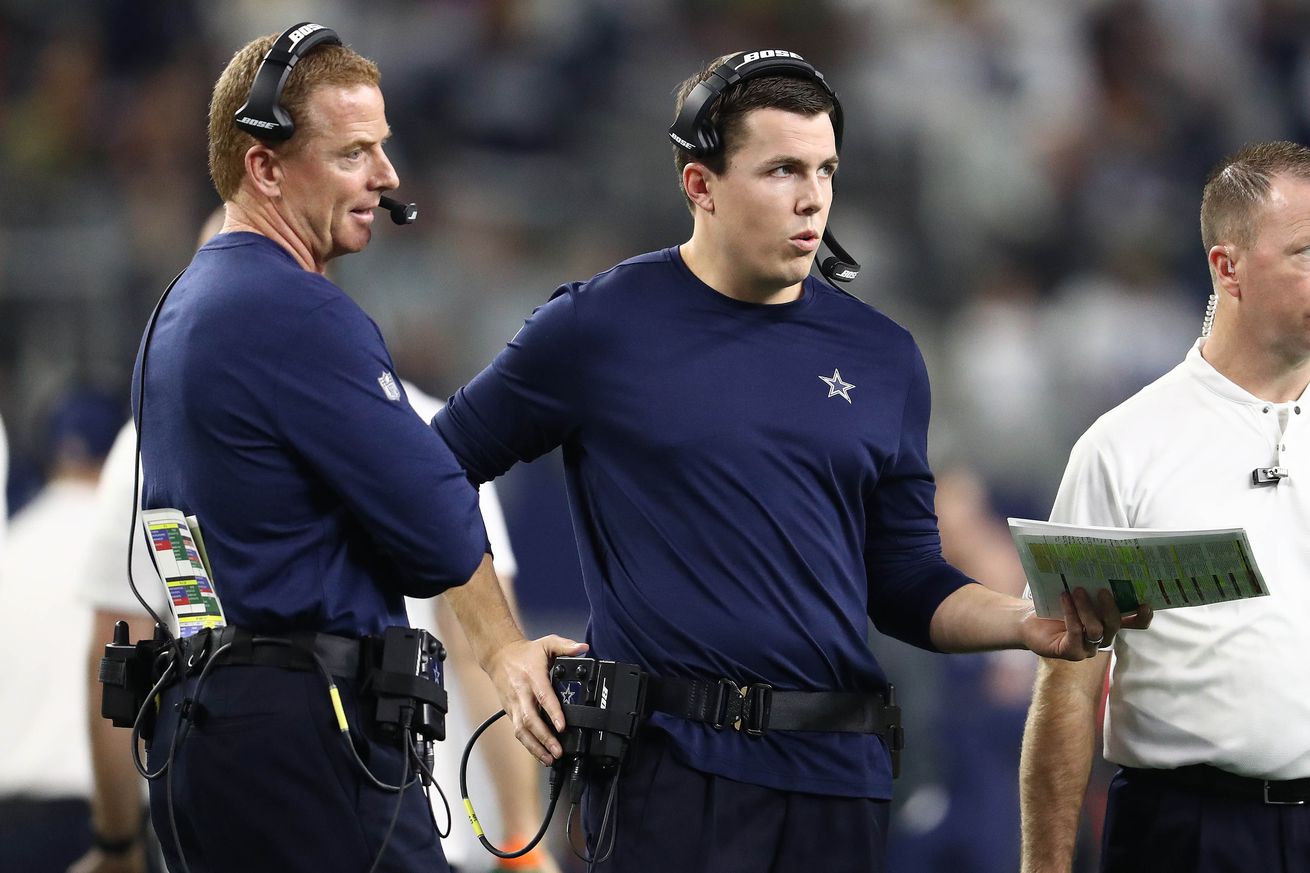 Sounds like big changes may be on the horizon for the Cowboys offensive scheme.

Ever since it became clear that Kellen Moore was going to become the next offensive coordinator for the Cowboys, everyone has been wondering what the offense will look like under the 30-year old first-time coordinator. With OTA’s beginning this week, we’re starting to get a small glimpse at what it might look like. A couple video clips have been encouraging:

This tiny clip should get you insanely hyped about Kellen Moore. The why will be obvious. (via @dallascowboys) pic.twitter.com/pYiHpL2DkO

Of course, it’s just OTA’s and nothing really matters until the pads come on. This is the time of year where everyone is in the best shape of their career, after all. But still, it’s promising to see an early emphasis on concepts that weren’t used much under the previous offensive coordinator, such as read option plays for Dak Prescott and backside screen plays to the tight end.

But on Wednesday, head coach Jason Garrett said something while discussing Moore’s acclimation to his new role that probably tells more about the new coordinator than any video clip at this point will:

Jason Garrett says there will be “evolution” in #Cowboys offense with change at OC. There’s “new language” as well, and the goal is to introduce team to Kellen Moore’s system.

It’s important to not read too much into this, but it certainly sounds like Moore’s version of this offense will be quite different from what we’ve seen in recent years. Moore himself has said that he wants the offense to feature multiple styles, which lines up with the projection I made on what Moore’s offense will look like.

However, that was operating under the notion that Moore would simply be incorporating some pre-snap disguise work into the same basic system, which was Garrett’s established Air Coryell system with some Erhardt-Perkins elements mixed in, all of which is detailed here. In short, the Erhardt-Perkins elements were mostly in reference to the language and the way the plays were called, which theoretically made it easier to call plays quicker in a game while still operating under the philosophies and strategies of the Air Coryell.

That Moore is changing up the language comes as a surprise. Of course, this is rather vague and we don’t really know what this “new language” is or the extent of it. Nevertheless, it’s enough of a departure from the old way of doing it for Garrett to comment on it. And Garrett seems to suggest the need to install Moore’s offense, which would indicate more change than just some pre-snap tricks to disguise the play. Furthermore, it suggests that Moore has significant control over the offense, as some have been worried that Garrett would want too much input and hamstring Moore.

Finally, there’s an additional quote from wide receivers coach Sanjay Lal that seems to back up the idea that Moore is going to be very creative with how he lines up players on offense without necessarily changing the concept of the play itself:

Lal on being able to move Cobb around the field: Our formations allow us to put the “F” [receiver] wherever we want. Any guy. We can put the “Z” inside. So when you see Amari inside, he’s not playing a different position, we just have a way to put him inside and the “F” outside.

While cryptic, all of this seems to point to the idea that this offense is indeed evolving under Moore. There’s still a few months to go before we can get a real good look at how this new offense works, but it seems like Moore is making plenty of changes.