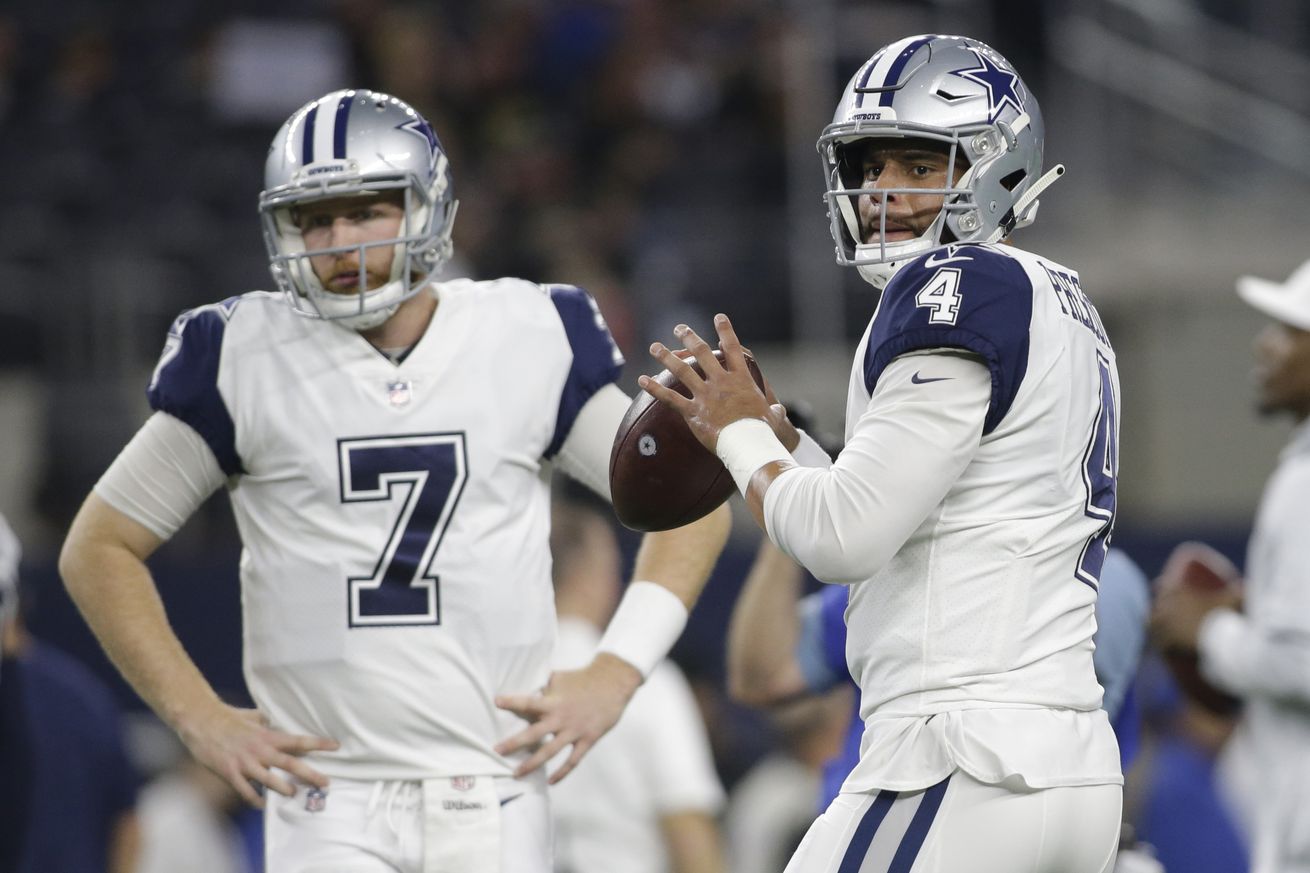 Looking at the Cowboys’ QB room.

Continuing our series of looking at positional groups. Today, we look at the most important position on the field.

The Dallas Cowboys have questions regarding safety and interior defensive line, but the team is most certainly set at the most important position in the sport: quarterback.

Dak Prescott has done nothing but put a winning product on the field since entering the league in 2016. Therefore, the former Mississippi State signal-caller is set to make bank this offseason, something in the range of $30 million for a guy that had to see 134 other prospects be drafted ahead of him.

SB Nation’s Charles McDonald wrote on why Prescott deserves the money, and why the Dallas Cowboys should pay their signal caller:

A deal between Prescott and the Cowboys just makes too much sense. He’s a 25-year-old franchise quarterback who has a young receiver he can continue to grow with on the field. Prescott has shown that he can lead an efficient passing game if he has enough pieces, and he can also produce on the ground.

At some point this offseason, Dallas will sign him to a long-term deal. Some people will question the high price, but the Cowboys don’t really have a choice. Talented quarterbacks with proven success are hard to come by — letting Prescott walk and trying to strike gold again in the draft isn’t a realistic option. Prescott has earned this deal, and he can keep the Cowboys playoff-relevant for years to come.

With as large of a fan base that the Dallas Cowboys carry, there is bound to be some disagreements on paying Dak the money that he has earned, but the only opinions that truly matter are the ones running America’s Team.

As the “is Dak worth it?” arguments continue, remember that outside of what was essentially a 2nd half funk during the messy 2017 season, Dak’s been pretty flawless through 51 career games.

He’s been elite for 80% of his career to this point. pic.twitter.com/dxTlaQqlQn

Who is behind Prescott, though? That is the more fascinating question.

Each contender has an argument to be the primary backup of the Dallas Cowboys, but only one can come out on top.

With the Cowboys, Rush has not had many opportunities for playing time in the regular season — thanks to the durable Prescott; however, Rush was able to put on a little bit of a show during his rookie preseason: throwing for 398 yards and six touchdowns on an impressive 74.5% completion percentage.

And the @dallascowboys take the lead!

Obviously, the regular season and the preseason are almost like two different leagues, but Rush looked capable when he received opportunities back in August of 2017.

Since then, the Rush hype has died down a little as he has only appeared in two regular season games and completing one pass. Though Rush has been no. 2 behind Prescott, he has a battle to retain that position on the depth chart.

After passing on drafting a quarterback in 2017, Dallas selected Western Kentucky signal caller Mike White in the fifth-round of the 2018 NFL Draft. White, who some had going before day three, put together two solid seasons for the Hilltoppers after transferring from the USF Bulls.

White totaled 8,820 yards, 63 touchdowns to 15 interceptions, and completed 66.5% of his passes during his time in Bowling Green, Kentucky. What intrigued teams the most about White was his ability to place the ball accurately down the field while having the poise to stand in the pocket against the blitz.

Mike White & Lucky Jackson just made it look TOO easy!@WKUFootball‘s ⭕️ is back in business this fall! pic.twitter.com/Mx7hsVzW5e

Combined with his 6-foot-5, 225-pound frame, White has some raw physical tools to be a successful quarterback — evidenced by throwing for over 4,000 yards in back-to-back seasons with WKU.

White did not see any action last season, but did throw for over 400 yards while completing just under 63% of his passes in the preseason.

As you can see, three former Cowboys quarterbacks — Jason Garrett, Kellen Moore, and Jon Kitna — will have a tough decision to make regarding who is the team’s primary backup during the 2019 season. You can vote on who you would rather be QB2 here.