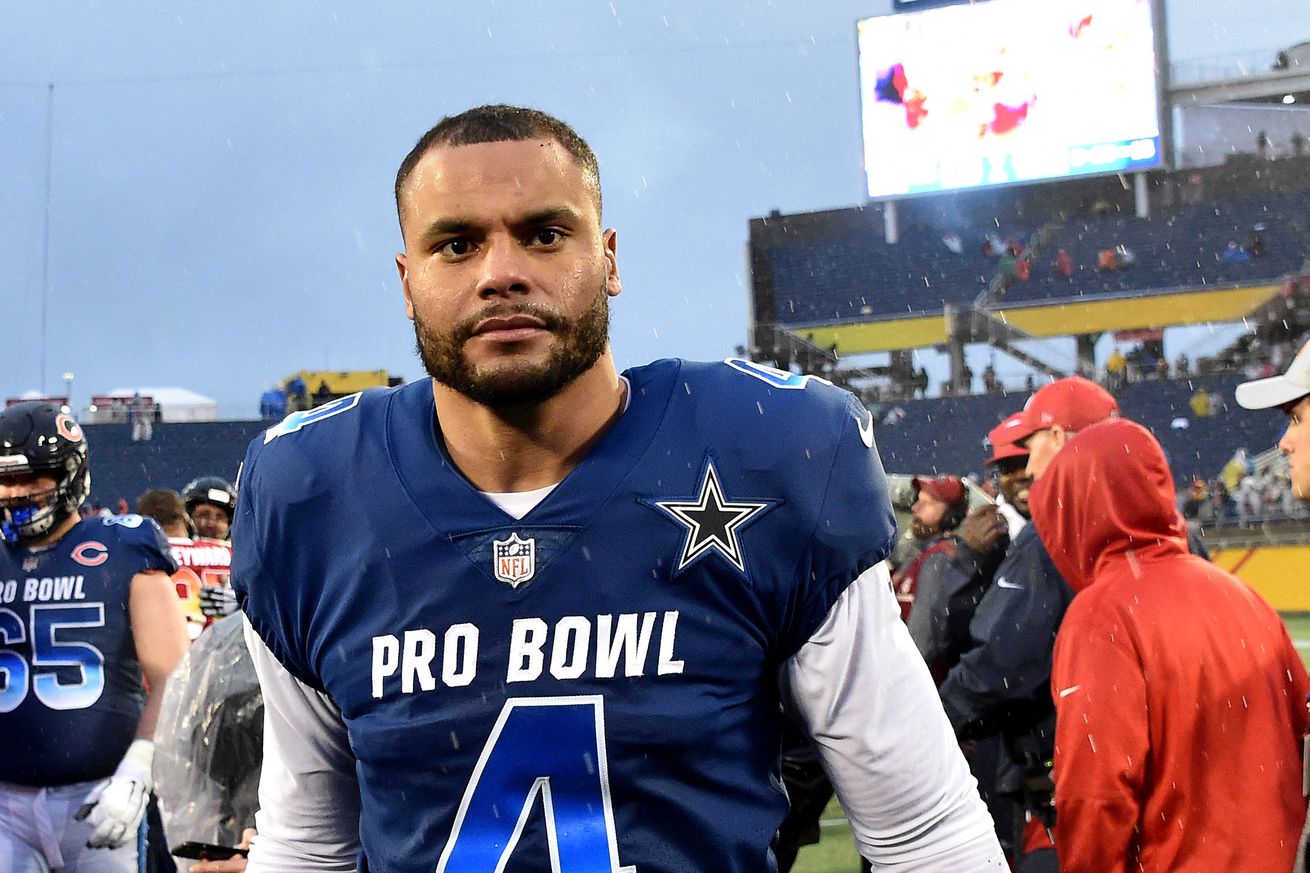 It’s year four for Dak, and he’s ready to take the next step.

There is no other quarterback in the NFL that is more severely underrated or overrated than Cowboys QB Dak Prescott.

Unfortunately, it’s hard for many fans to come to look at Dak Prescott without some sort of bias. The side of fans that think Prescott is one of the worst quarterback’s in the NFL, seem to have heavy ties to former quarterback Tony Romo, and can’t seem to get past the caching staff’s decision to name Prescott the starter in 2016. On the other side of things, there’s people who view Dak Prescott as one of the five best quarterbacks in the NFL, and struggle to see any of Prescott’s flaws. The truth of Dak Prescott is somewhere in between the two extremes.

On Saturday morning, I joined RJ Ochoa on ESPN San Antonio to discuss Dak Prescott and just where he lines up in the NFL quarterback rankings, and his ability to hopefully lead the Cowboys to a Super Bowl in the coming years. Prescott is primed to receive a huge payday in the coming months, and all eyes will be on Dak heading into year four, likely playing under a much larger cap hit in 2019 than his first three years in the league.

When looking at the numbers on Dak, it’s hard to find a quarterback in the NFL that has had more success leading a team to victory than him. In his first three years in the NFL ,Prescott led Cowboys to a 32-16 record, two divisional titles, and has started every eligible game since entering the league. Since he took over as the starter the Cowboys have reached the playoffs in two of the last three years and have won one of the three playoffs games they’ve played in (not to mention they’ve fallen to Aaron Rodgers and Sean McVay who many believe are the best at their craft). In those games, Prescott has averaged a 64.1 completion percentage, 265 passing yards per game, and averaged a 95.7 passer rating. While the playoff numbers are impressive (even in the losses), the full picture shows a very, very productive quarterback.

There are elite qualities to Dak’s game

NFL Network’s Bobby Belt posted some very interesting numbers via his twitter account early last week. Outside of games 26-36 of Dak’s career, which were games that Tyron Smith missed due to injury, combined with the six games that Ezekiel Elliott served in 2017 as a result of the suspension. Outside of that 10 game stretch, Dak Prescott has played at a borderline elite level. Don’t believe me? Look for yourself.

As the “is Dak worth it?” arguments continue, remember that outside of what was essentially a 2nd half funk during the messy 2017 season, Dak’s been pretty flawless through 51 career games.

He’s been elite for 80% of his career to this point. pic.twitter.com/dxTlaQqlQn

With this information many will claim that Prescott should be the one elevating his teammates and shouldn’t allow his numbers to fall so much just because his running back and left tackle missed some games. While there is certainly some truth to that narrative, there’s no quarterback in the NFL that can produce at a high level with a help around him. Cowboys fans should be well aware of that after seeing the struggles Tony Romo went through with a struggling offensive line and running game.

With these numbers, you’d think that Prescott would have a little more respect from the Cowboys fanbase than he currently gets. If these numbers don’t impress you enough, maybe comparing the final eight games to one of the greatest QB’s of all time in 2018 will.

Player A is Dak Prescott.

Player B is Tom Brady.

These are the final nine games of their 2018 seasons (post-Amari for Dak, from MNF at Buffalo on for Brady). pic.twitter.com/8VmcfY6Ysv

While stats without context can be a dangerous way to form an opinion, these numbers show that after the addition of Amari Cooper, Prescott was able to perform and put up similar numbers to six-time Super Bowl champion, Tom Brady.

Another one of the big misconceptions surrounding Dak Prescott is his ability to make plays consistently down the field. Thanks to Brad Kelly of The Draft Network, that narrative was also proven wrong. After much research, tape viewings, and charting, Kelly came away with some great numbers on 20+ yard pass attempts.

Dak Prescott on throws of 20 yards or more:

Some of the best from 2018: pic.twitter.com/FDqFK8bVYH

While we could argue we’d like to see the completion go up, everything else about these charted numbers is extremely impressive from Prescott.

While there are flaws in Dak Prescott’s game, there are far more positives on tape than negatives. When you add in Prescott’s leadership ability, intangibles, passing abilities, and rushing abilities, it’s easy to see why the Jones’ are set to make Prescott the highest-paid player in the history of the Dallas Cowboys franchise.