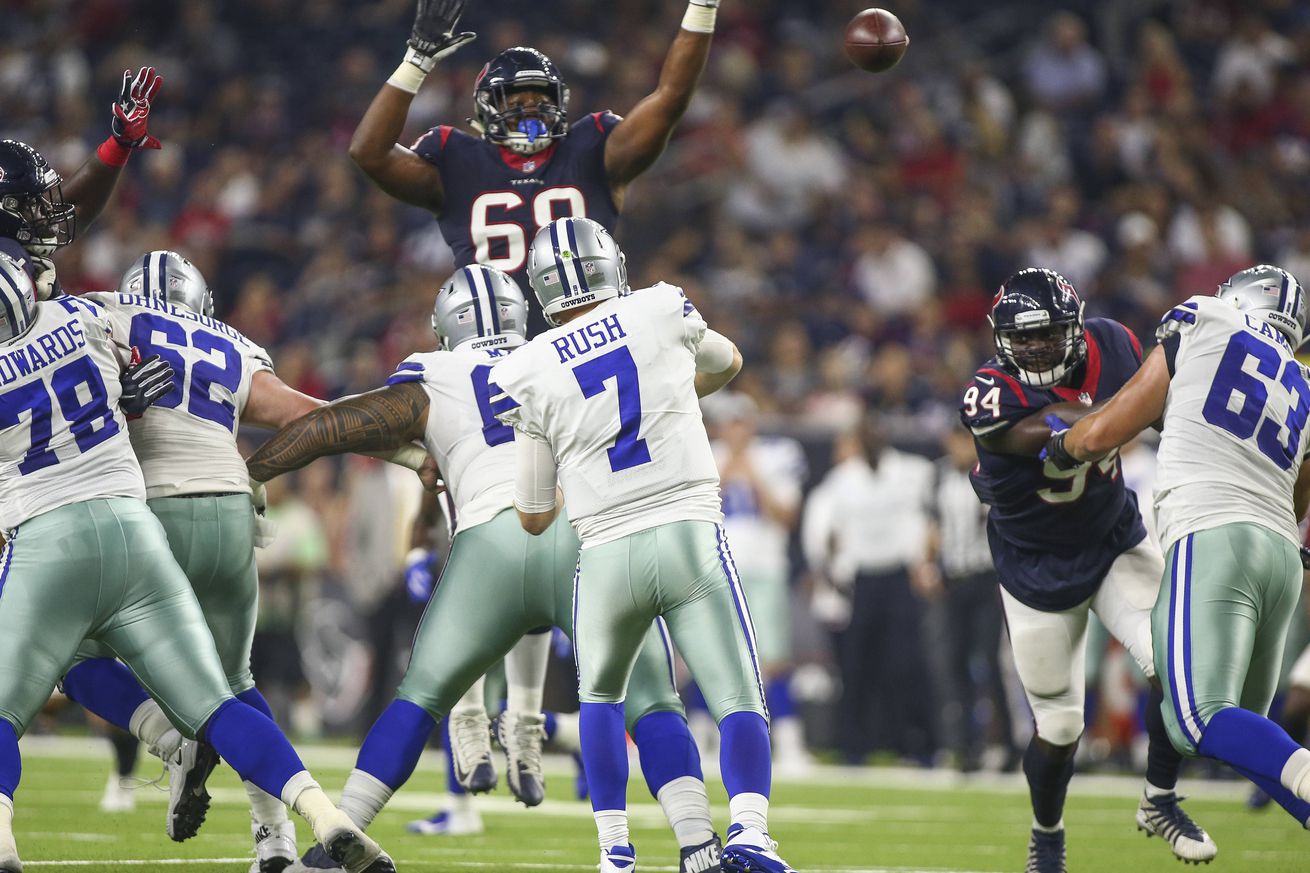 The Cowboys are going with inexperience behind Dak Prescott.

The Dallas Cowboys front office has done a terrific job filling the roster this offseason. They’ve augmented the team’s core pieces with targeted free agent signings, a key trade and a draft that looks like it will provide solid depth at important spots.

As such, a lot of Cowboys’ fans are optimistic the team can improve upon last season’s NFC East division title and wild card playoff win. However, looking backward, the team has not dealt well with increased expectations:

2008: Following a 13-3 season that saw a 27-year-old Tony Romo set numerous Cowboys records the 2008 Cowboys were widely regarded as a Super Bowl favorite from the NFC. Here’s the pre-season power rankings from ESPN:

Those high expectations, however, did not turn into a memorable season. Those of us with good memories do not recall the 2008 season with fondness as the Cowboys finished 9-7 and missed the playoffs completely. Their season ended with back-to-back, humiliating defeats; first losing the final game at Texas Stadium 33-24 to the Baltimore Ravens. Then suffering the second worst defeat in team history, a 44-6 shellacking by the hated Philadelphia Eagles in a win-and-advance game for both teams.

In short, the Cowboys didn’t come remotely close to meeting the high expectations they had going into the season.

This isn’t a rare event. In fact, each time in the last dozen years when the Cowboys have had high expectations going into a season following a successful season they’ve ended up falling on their faces:

In short, every time the Cowboys have given fans reason for optimism they’ve immediately followed up by failing to meet those expectations. Looking deeper at each one of these disappointing seasons, we can see a clear trend emerge:

In three of the four disappointing seasons the Cowboys starting quarterback missed notable time. Which leads us to wonder who were the backup quarterbacks and how did they perform in their replacement role?

With the exception of Jon Kitna’s quality performance in 2010 this is a veritable horror show of quarterbacking. At no point during any of Johnson’s, Bollinger’s, Cassell’s and Weeden’s performances did anyone have confidence they were going to win games.

In short, the Cowboys entered those promising seasons with inadequate backup quarterbacks. Then, when those quarterbacks were asked to fill in they proved incapable and promising seasons were derailed. Yes, 2010 went off the rails before Romo got hurt (the team sat at 1-5 when Romo went down) and in 2017 Dak Prescott played every game.

But what can’t be denied is the Cowboys front office seems perfectly comfortable risking a potential Super Bowl-caliber roster on a wholly inadequate backup quarterback. Twice, it’s come back to haunt them (and us, as fans).

And yet, we find ourselves in 2018 facing the exact same situation… and again, we see the front office happy to repeat their behavior from those failed seasons.

Neither, however, looked like legitimate NFL quarterbacks during the 2018 preseason. White was sacked seven times in 77 drop-backs while compiling a 73 quarterback rating. While he had some good plays, he often looked overwhelmed with no pocket awareness.

Cooper Rush, meanwhile, didn’t react well to having competition for the backup position. Rush had electrified Cowboys fans with a near flawless 2017 preseason. Since, then, however, he’s done nothing but look like a guy who didn’t deserve to be drafted in the first place. His 2018 preseason numbers: 62% completion rate, one touchdown, four interceptions and a 58 passer rating.

He also gave us this forgettable play:

Were I to rank my confidence level (0 to 5) in the backups at each position group, quarterback would be last – by far:

You can quibble about this group or that group, this ranking or that ranking, but it’s hard to rank the QB group above zero. Which shows the Cowboys’ front office is perfectly happy to gamble yet another potential Super Bowl-caliber roster on a wholly inadequate backup quarterback situation.

Neither of those things are true. The Cowboys currently have $19M available in 2019 cap space. In addition, there were numerous opportunities for the Cowboys to acquire a more capable backup either through free agency or trade. The following were free agent quarterbacks and the numbers they signed for during the off-season:

In addition to those free agent signings a number of quality backups moved via trades:

Other names that were available:

Summarizing, the Cowboys had (and still have) cap space to work with for 2019 and there were numerous backup quarterback options available. Not only did the Cowboys not finalize anything with the available players; they seemingly showed no interest whatsoever.

The Cowboys actions speak loud and clear: they’re happy with their current backup quarterback situation and have no interest in investing even minimal salary or draft resources in bringing in a more proven talent.

This is puzzling. In addition to the Cowboys own misfortunes employing inadequate backups, other opposing quality teams have shown the benefits of having a capable backup quarterback. The 2017 Philadelphia Eagles signed free agent Nick Foles to a guaranteed $15M deal despite having drafted Carson Wentz the previous season. All Foles has done is win four playoff games and give Philadelphia their one and only Super Bowl trophy.

Now, none of those are names that can carry a team through a post-season the way Nick Foles did with the Eagles, but fans might have more faith in some of them coming in than Cooper Rush or Mike White.

It’s possible this won’t matter. Dak Prescott seems to be made from the Tom Brady, Brett Favre, Peyton Manning, Drew Brees, Russell Wilson, Phillip Rivers mold of quarterbacks who never or rarely get hurt. Prescott has started and finished every game since getting the start for his very first NFL game. The team is hoping he continues that streak and none us of have to find out if Rush or White can be better than they’ve looked when allowed to step on the field.

But hope isn’t a a sound strategy. If Dak does miss some time, that $19M in cap space and the sixth- or seventh-round picks they kept in 2020 won’t seem worth much as the team risks yet another promising season with an inadequate backup quarterback.