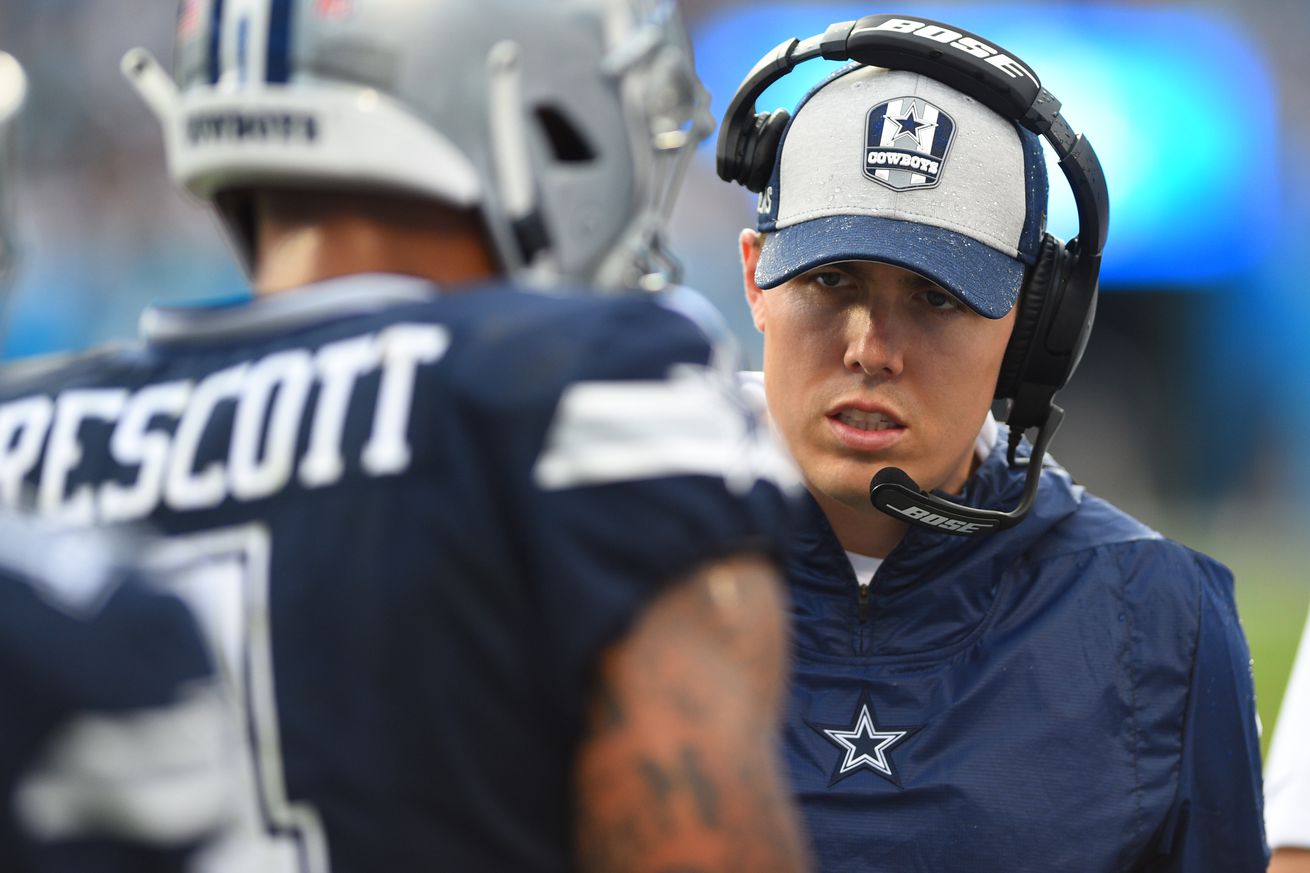 The new offensive coordinator knows how he’ll do his job.

These days it seems like there’s a solid mix in preferences between play-callers, both offensively and defensively. Some prefer to be on the sidelines where they can stand with their players, while others choose to sit upstairs in the booth to get a bird’s eye view of the field.

For example, Kyle Shanahan exclusively sat in the coaches box when he was the offensive coordinator for the Falcons. Since becoming the 49ers head coach, he’s obviously been on the sidelines while still calling plays. Shanahan’s replacement in Atlanta, Steve Sarkisian, initially called plays on the field and later moved up to the booth in hopes of a better view to aid his ailing play-calling.

Scott Linehan did something similar last season. He had been on the sidelines his entire time with the Cowboys but moved up to the booth with the hopes of being able to improve his play-calling. Linehan, like Sarkisian, no longer works in the NFL.

Ultimately, though, the difference between being on the sidelines and being in the booth is subjective. There’s no data that suggests either method is superior, as it’s entirely up to the coordinator’s preference and how the communication with the rest of the staff and players works.

For first-time offensive coordinator Kellen Moore, he has seemingly already made the decision on what method he prefers.

Cowboys OC Kellen Moore said he will call plays from the sideline during games this season. QB coach Jon Kitna will be up in the coaching booth. Moore: “I like the sideline, just being able to interact with the players and talk to Dak. I think it will be perfect. It’ll be good.”

Moore prefers being able to have that personal connection with the players, which makes sense given the previous reports from people praising Moore’s ability to connect and communicate with players. Furthermore, this is what Moore has grown accustomed to in his short NFL career. Obviously as a player he was on the sidelines, and in 2016 and 2017 when Moore, as the backup quarterback, served as the de facto quarterbacks coach for Dak Prescott, he was also on the field.

And in 2018, when Moore was officially the quarterbacks coach, he was also there on the field with Prescott. With Linehan moving upstairs, Moore took on an increased role in communication, as Linehan would talk to his quarterback through Moore.

It’s also noteworthy that new quarterbacks coach Jon Kitna will be up in the booth. While Kitna is being lauded by many for his reputation as a strict technician – which you’d think Dallas would want on the sidelines as well – Kitna is also highly thought of as a strategist and is expected to have some level of influence in Moore’s weekly game plans. Thus, it makes sense to have Kitna upstairs for an eye-in-the-sky kind of role, providing feedback to Moore on what he sees from a different vantage point.

Meanwhile, Moore will seemingly keep continuity in the way he interacts with Prescott. The two must have a good relationship at this point, and it makes sense that Moore specifically highlighted being able to speak directly with his signal caller as one of the reasons for deciding to call plays from the sideline.