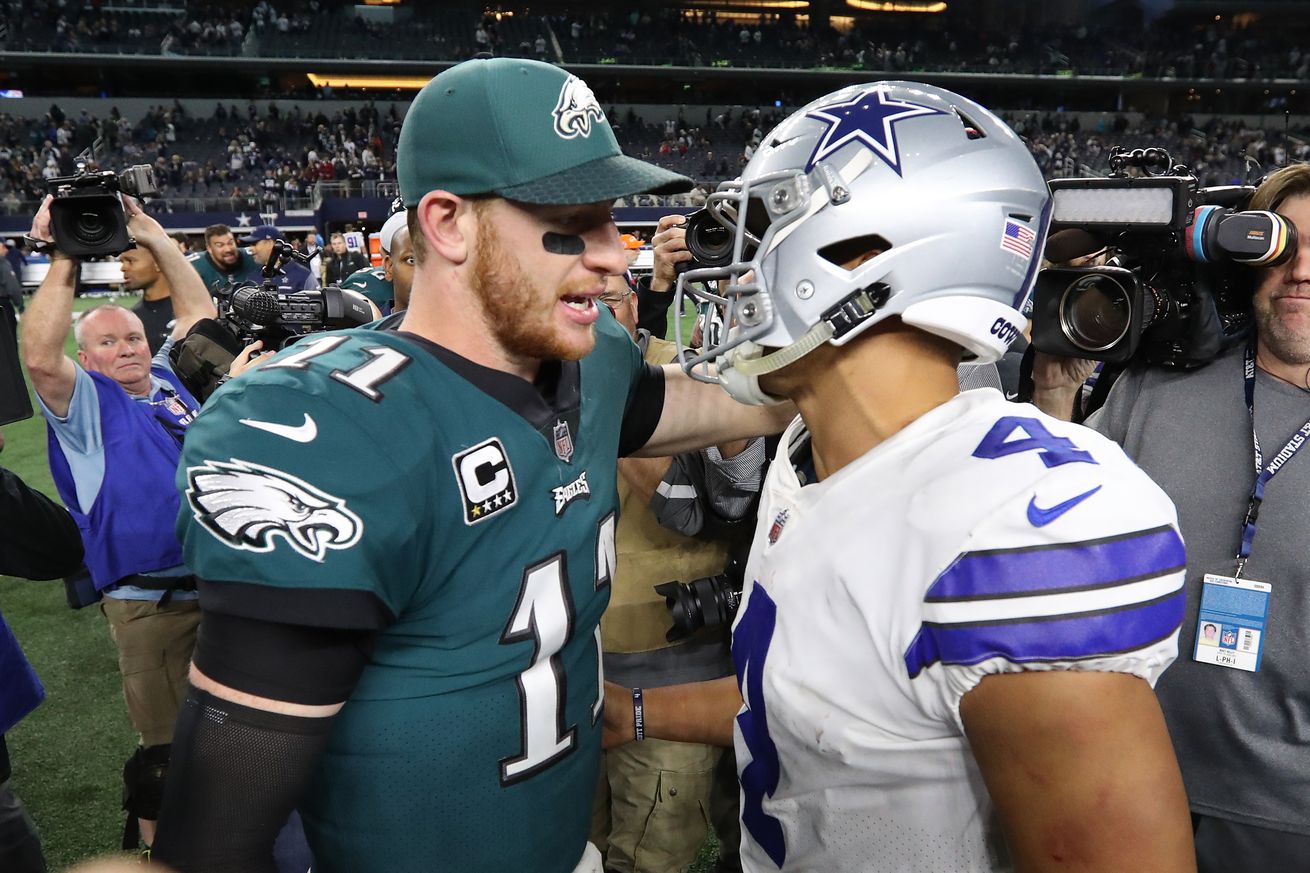 The Eagles had a big hand in Dak Prescott joining the Cowboys.

Dak Prescott and Carson Wentz will spend their entire careers being compared to each other as both were selected in the 2016 NFL Draft. And as their journey continues, both are being asked to lead their team over the next several years as a lucrative contract extension is coming for each of them.

Over the first three seasons of their careers, they have taken turns being better than the other, alternating Pro Bowl appearances. Wentz was having a remarkable season in 2017 before he got hurt, and thanks to Nick Foles filling in nicely, Wentz owns a Super Bowl ring. Prescott, however has all the statistical accolades and has been a steady dose of success since entering the league.

While this should be a fun thing to watch over the next decade, it’s actually interesting to see how connected their paths really are. The Philadelphia Eagles made a conscious decision that Sam Bradford wasn’t going to be their quarterback for their future and made a big trade with the Cleveland Browns to move up to select Wentz as their new franchise quarterback.

Initially, the Eagles received two draft picks from the Browns – the No. 2 overall pick in 2016, which they used to take Wentz and a fourth-rounder the following year. They actually used that fourth-rounder to move up to select running back Donnel Pumphrey, in what many thought was as move to jump ahead of Dallas. Regardless, Pumphrey is no longer in the league and is now a negligible piece to that trade.

In exchange, the Browns got five picks:

While the players the Browns got in return isn’t much of a concern to Cowboys fans, there was one part of that deal that should be of particular interest to all of us. Of all the wheeling and dealing the Browns did with those picks, one of those trades ultimately changed the course of the Cowboys franchise forever.

Thanks to the Browns, the Oakland Raiders were able to jump the Cowboys early in the fourth round so they could select Michigan State quarterback Connor Cook. Had the Raiders not done that, Cook would’ve been the Cowboys pick at 101st overall. Thanks to a leaked draft board, we know that Cook was ranked 37th on the Cowboys board, 40 spots higher than Prescott.

The Cowboys were high on Prescott entering the draft and many of us projected him to Dallas. But on draft day, the Cowboys just kept having higher players on their board available to where the quarterback position kept getting ignored. The team wasn’t going to reach, but it looked like they might’ve missed their chance when Cook was taken right from underneath them in the fourth round. As luck would have it, the Cowboys patience turned out to be quite fortuitous. If Cleveland makes a pick there, Cook’s still on the board and the Cowboys draft him over Charles Tapper. That means Prescott never wears the star.

The Cowboys didn’t have to trade a lot of draft capital to get their quarterback like the Eagles did. In fact, Prescott was selected using the compensatory pick they received when DeMarco Murray and Jeremy Parnell signed a big contract in free agency. The big money the Eagles gave Murray ended up cancelling out the Cowboys acquisition of Greg Hardy, allowing the Parnell loss to award them a fourth-round comp pick.

So, in a weird six-degrees-of-Kevin-Bacon sort of way, the Eagles played a big part in the Cowboys landing Prescott. Not only did the Murray signing help give the Cowboys the extra draft capital needed, but the Wentz trade had a trickle down effect that opened the door for the team to select Prescott.

Years from now, we can all sit back and have a nice cold glass of lemonade as we discuss the legacy of these two quarterbacks. How they perform should have a resounding effect on their team’s success over the next several years. And if that story entails Prescott holding the Lombardi trophy, just remember how it all wentz down.