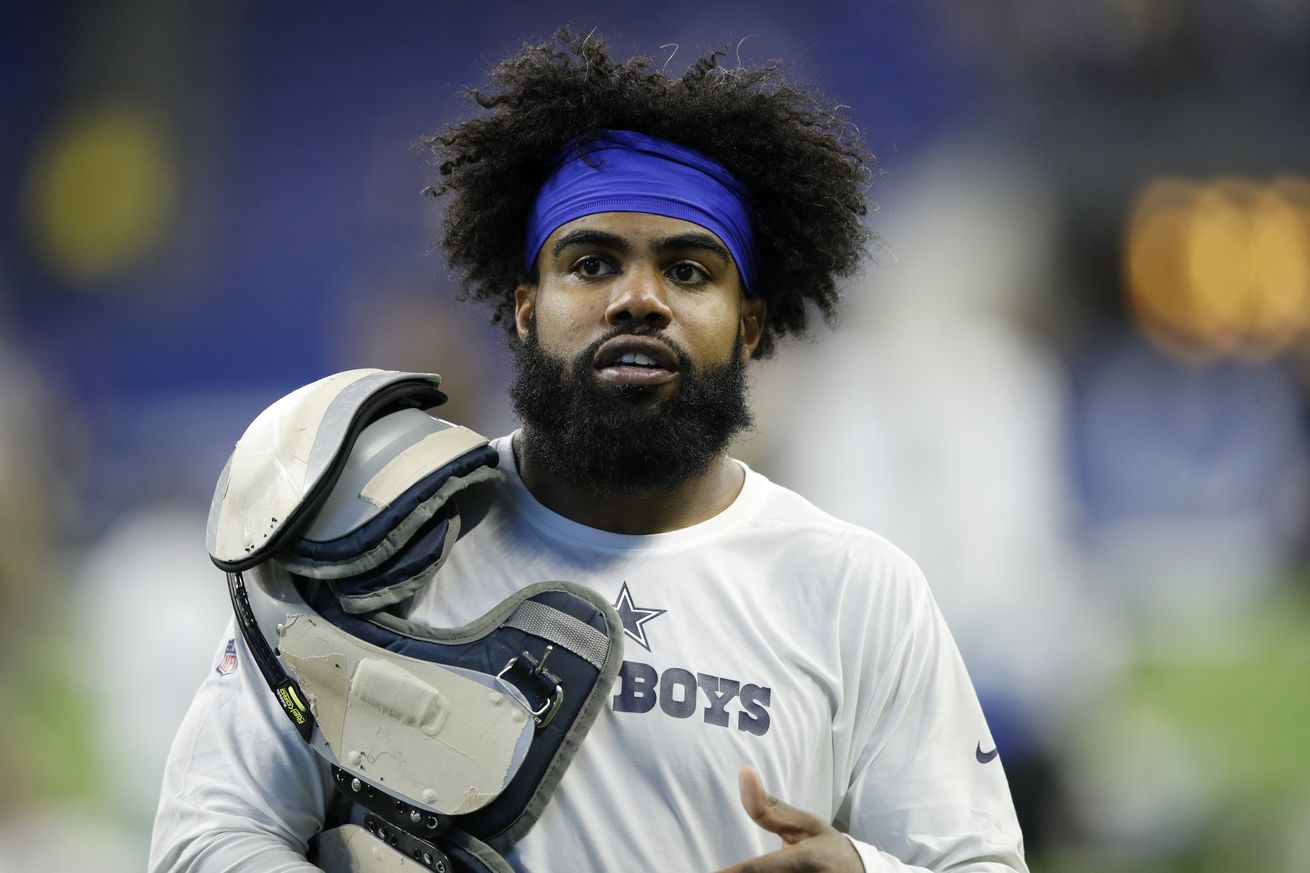 Here is your latest dose of Cowboys news…

The Biggest Question for Each NFL Team Coming out of OTAs – Kristopher Knox, Bleacher Report

Bleacher Report takes a look at the biggest question for each team in the league. The good news for the Cowboys is there aren’t a lot of questions, but the one they have is definitely a big one.

Dallas Cowboys: Can the Cowboys Depend on Ezekiel Elliott?

The Dallas Cowboys know at this point that they can depend on running back Ezekiel Elliott on the field. But can they trust him to stay eligible to be on that field for the remainder of the offseason? This is a fair question, considering the NFL is “likely” to investigate Elliott’s recent altercation with a Las Vegas security guard, according to Yahoo Sports’ Charles Robinson. Elliott has a history of off-the-field issues, including a six-game suspension for violating the NFL’s personal conduct policy in 2017. While this latest altercation may not result in league discipline, the Cowboys will have to trust that Elliott will stay out of further trouble between now and training camp. If Dallas is unsure of Elliott’s ability to do so, they need to start putting together a backup plan—and should likely table extension talks until after the season.

The NFL Nerds Are Right That the Running Game Is Overrated, but It Still Matters – Mike Tanier, Bleacher Report

There’s a growing debate about the importance of the running game vs. the pass, but both play a key role in each other’s success.

Here’s a simple example that won’t make your eyes glaze over. Teams averaged 4.4 yards per rush last season—the highest per-carry rate in NFL history, in the most pass-happy season in NFL history! Last year’s offensive explosion had almost as much to do with the creative, high-efficiency rushing attacks of teams like the Rams and Chiefs as with the passing game.

The running game may actually grow more marginally valuable as passing rates increase because of the element of surprise, the proliferation of dime defenses full of 195-pounders (see last season’s divisional-round matchup between the Patriots and Chargers), quarterback runs, the elimination of ineffective two-yard plunges into stacked defenses and other imaginative options.

It’s easy to say that Cowboys All-Pro tackle Tyron Smith had a down year, but even when he’s not playing his best, he’s still pretty darn good…especially when it counts the most.

Over the course of the season, Smith graded out as the sixth-best left tackle with an overall grade of 80.1. As great players do, though, he raised his game in clutch time and finished those plays with a grade of 87.3. Smith’s run-blocking grade of 78.4 led all tackles, and he allowed zero quarterback hits or sacks on 156 pass-blocking snaps.

Travis Frederick has heightened grasp of how to dominate NFL – Patrik Walker, 247 Sports

The team’s All-Pro center was out of action last year, but that doesn’t mean he hasn’t grown. As Patrik “No C” Walker indicates, advances in his game mentally could make him even better.

Frederick was already not-so-arguably the best center in football before he was forced to the sideline in 2018, but he might even be on the cusp of hitting the next level if he’s cleared to return this coming season.

“Physically, [being in the meeting rooms only] hasn’t helped a lot, but mentally in the way that I’ve approached defensive recognition — I think it’s made a big difference,” he said. “I see the game a little bit differently than I did before. …A lot of times during the season you are so focused on your technique and so focused on what it takes physically to get your job done, that you don’t get a great chance to advance mentally. You do your best to do that during the offseason, but to get to see real live looks all the time and to see the way defenses are disguising things, and what kind of coverages they’re moving to — I think it was really beneficial to me. “I’ve seen the benefits of that already in OTAs.”

Will Cowboys’ O-Line Versatility Cost Somebody a Roster Spot? – Jess Haynie, Inside The Star

The Cowboys emphasis on position flex has certainly came in handy, but will it allow them to get away with keeping fewer offensive linemen on the roster?

Plenty of teams have carried nine linemen before, but that means losing a roster spot somewhere else. Is an extra guard worth having to cut that extra guy at receiver, defensive line, or in the secondary? Xavier was solid in his relief of Connor Williams’ last year. But he doesn’t give you the versatility of Looney or the upside of McGovern. Either he or McGovern likely wouldn’t be active for many games. The Cowboys can move guys around in any emergency situation. Someone standing on the sideline in street clothes isn’t useful then.

We don’t know that Dallas won’t keep nine guys, rendering this topic moot. But given some of the projections at other positions it’s easy to see why they would want to save roster spot by going shorter on the offensive line. The versatility of their talent gives the Cowboys options. Unfortunately for someone, and likely Xaver Su’a-Filo, that option could mean they’re not making this team.

Dak Prescott blocks out criticism with new contract on the horizon – Calvin Watkins, The Athletic

To say the Cowboys quarterback has had his fair share of critics is putting it mildly, but for Dak – it’s just noise.

Prescott trusts his coaches and teammates to hold him accountable more than anybody else.

“It’s elevating, it’s standards, it’s expectations,” Prescott said. “Why get mad at somebody if they’re trying to raise my expectations? My expectations are already (high), and that’s my point. Anybody that’s coached me or trained me knows that it’s not a sense of having to ride somebody’s ass. Some players are like that, some players need that.”

And Dak is hoping he can trickle down that same type of elevating to his teammates by being a more vocal leader.

“I’ve always been vocal,” Prescott said this week, via Jon Machota of the Dallas Morning News. “I can probably say this year I’ve been more stern. Not necessarily mean, but I expect a lot from these guys, especially guys that have been here. And I want them to expect the same from me.”

That’s the hallmark of a veteran quarterback who is embracing his broader role — and who understands how to properly hold teammates accountable.

“I’d be pissed if they weren’t calling me out for it, if a guy blows a route or something like that,” Prescott said. “I’d be mad as hell if they don’t call me out for it.”

Mailbag: Who Will Have A Breakout Season? – Staff, Dallas Cowboys

If you had Byron Jones as your “breakout” player last season, then congrats – you nailed it. But who’s going to earn that honor this season? The staff over at the mothership provide their guess in their latest mailbag question.

Watching the Raptors’ Pascal Siakam go off last night in the NBA Finals got me thinking: Who’s a potential breakout candidate on the Cowboys this season? – MATTHEW K / PLANO, TX

Bryan: This is the season that Xavier Woods leads the club in interceptions. He’s getting better playing with his eyes and seeing the field, which I believe will result in more turnovers.

Rob: I don’t think we’ve seen the best from Blake Jarwin yet. That monster game against the Giants was historic – he was the first Cowboys tight end in 45 years to score three touchdowns in a game – and will be hard to duplicate. But he’s capable of being a consistent impact receiver for Dak Prescott. Jason Witten’s return is important, but I expect Jarwin to be involved in 2019, too.

Can Jarwin have a breakout season with Jason Witten back in the fold?

The final performance, in what was a meaningless game in the standings but important to the coaching staff to establish a double-digit win season, was Jarwin’s breakout. Not only did he contribute seven catches in a shootout with rival New York, there was solid yardage associated with his game for once, as he averaged 17 per reception to the tune of his first 100-yard performance. His 119-yard effort including a whopping three scores, the first of his season and of his career.

In the Cowboys two playoff games though, a win over Seattle and a loss to the Los Angeles Rams, Jarwin wasn’t an integral part of the attack. He caught each of his targets, but had only five looks and accrued just 32 yards over the two games.

So what does the future hold for Jarwin?

Jarwin will still, however, play a meaningful role for the Cowboys in 2019, especially if Witten loses his rejuvenation. Even with Dallas planning on utilizing fullback Jamize Olawale more than they did last season (when he was virtually invisible as an option), Jarwin would see time on the field.