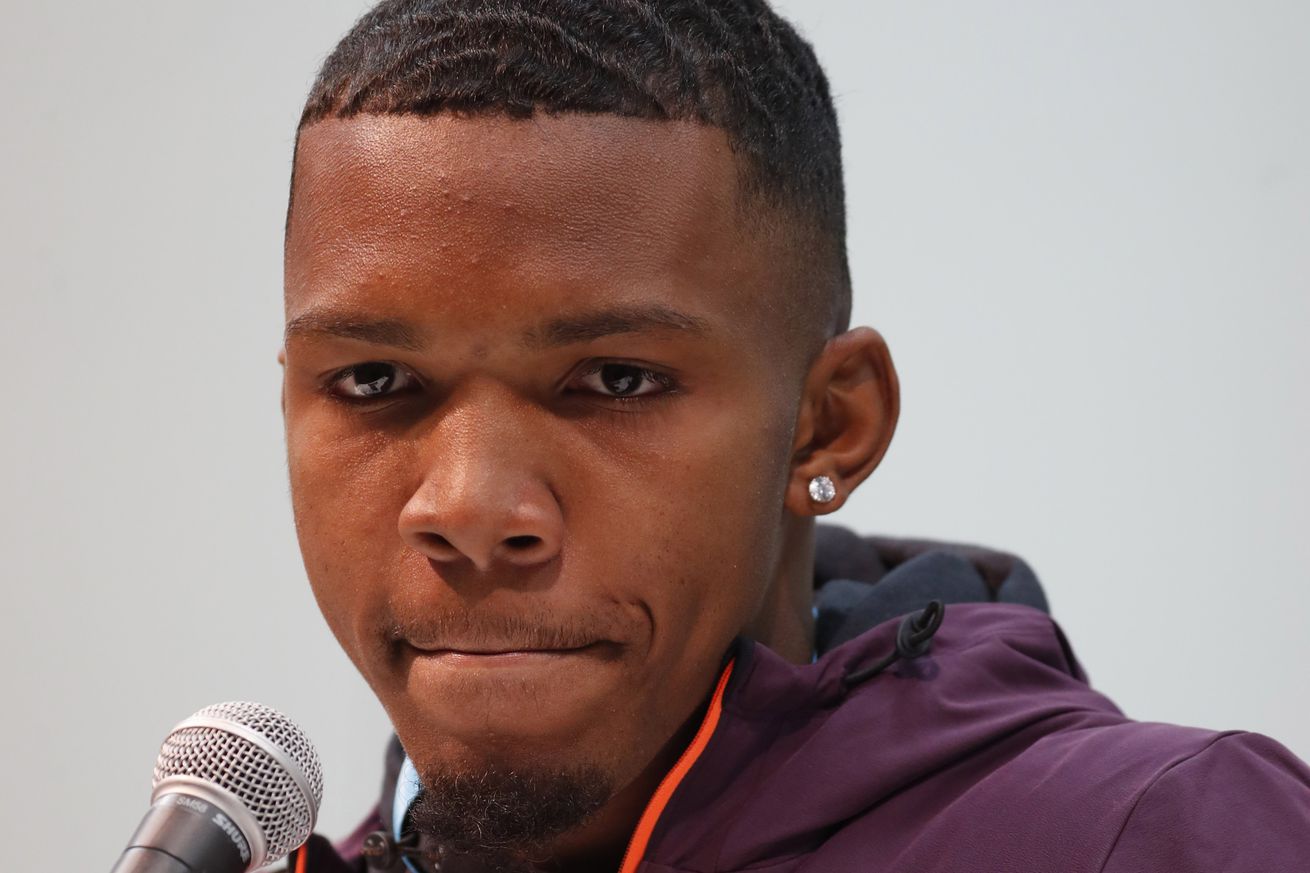 Here’s why RB Tony Pollard has the best chance to make the biggest impact of all Cowboys rookies – Kevin Sherrington, SportsDay

Kevin Sherrington from the Dallas Morning News took the time to answer a couple questions, including which rookie he expects to make the biggest splash this season.

Which Cowboys 2019 draft pick makes the biggest impact as a rookie?

Sherrington: Depends on what kind of impact you’re talking about. If it’s splash, only Tony Pollard has a chance. If Kellen Moore proves he can put a few wrinkles in a game plan, Pollard can do what they’ve wanted Lance Dunbar and Tavon Austin to do. Part of that problem getting it done has been injuries to key personnel; part of it was Scott Linehan’s reluctance. I’m betting that Moore will be more assertive within what essentially will be the same framework of offense. Linehan’s hesitance to fully flesh out their playbook is why he’s out. Moore knows that, and he knows he has something to prove.

I expect Trysten Hill will also make an impact, but he’s part of a rotation, and DL don’t get the same opportunities, especially if they’re not playing every down.

How the Cowboys offense is ‘getting a full makeover’ with Kellen Moore as offensive coordinator – Staff, SportsDay

What kind of impact will Kellen Moore have on the Cowboys offense?

Orlovsky: The reasons why are like Kellen Moore are this: he’s an incredibly outside of the box thinker. Kellen is not going to be the cookie cutter thinker that some coaches are in the NFL. He’s a guy that’s gonna be more Sean Payton, more Andy Reid, more Matt Nagy, more Sean McVay like. I like the fact that he’s gonna be willing to try different things.

No. 2, Kellen’s not that far removed from college football. He was part of some unique college football at Boise State. That’s where he was trained. He has all that. And his brother coaches in college football. So he’s been directly tied to college football because of his family. “Because of what he learned in college and learned in the NFL and just the creative mind that he has, you’re gonna see this offense be totally different than what they’ve seen certainly under Scott Linehan and Dak Prescott over the last couple years.”

Every NFL Team’s Player with the Most on the Line in Training Camp – Brent Sobleski, Bleacher Report

Bleacher Report identifies players with the most to lose entering training camp.

What a difference a year makes. The Dallas Cowboys planned to use Tavon Austin as a focal point of the 2018 offense. “Coaches have a great plan, whether it’s getting him out of the backfield, lining him up at X, lining him up at Z, putting him in the slot,” quarterback Dak Prescott said during last year’s minicamp, per the Dallas Morning News’ Jon Machota. “He’s a guy we get the ball in his hands, he’ll score some points and get a bunch of yards in this offense.”

Austin fell well short of expectations with 195 yards from scrimmage and two touchdowns. Instead, Amari Cooper became Dallas’ No. 1 wide receiver after the Cowboys acquired the 2015 fourth overall pick from the Oakland Raiders prior to the October trade deadline. As a result, the 29-year-old didn’t garner much interest on the free-agent market. He re-signed with Dallas on a one-year, $1.75 million prove-it deal. Only $500,000 is guaranteed. Austin is now fighting to make the roster behind Cooper, Michael Gallup, Randall Cobb and Allen Hurns.

Why Cedrick Wilson Jr. could play a bigger role in this offense than we think – David Howman, Blogging The Boys

While there is a log jam at the wide receiver position, our own David Howman reminds us that one guy might have a little bit of an edge over the others.

Wilson hails from Boise State, where he had an impressive two-year career with 139 catches for 2,640 yards and 18 touchdowns in just 26 games. Not only did he have good production, but Wilson also showcased quality athleticism and agility at the combine. His 4.55 40-yard dash was only slightly slower than Gallup’s, while his vertical and broad jumps were one inch higher and lower, respectively, than his fellow Cowboys rookie receiver. But the more impressive part was his top ten finishes in both the 3-cone drill and the short shuttle.

Of course, another reason why Wilson was so successful in college is because of the way the Boise State offense is engineered to utterly confuse defenses into letting guys get easy plays. And therein lies the hook: Kellen Moore seems to be infusing this offense with the concepts that are evident in Boise State’s attack. That should give Wilson an inside edge in this position battle given that he has two years of experience in that kind of offense. While other receivers are learning some of the new aspects, particularly the pre-snap motion elements that are bound to be included, Wilson should already be more or less up to speed with what Moore wants.

Before you decide if Dak Prescott is worth the big money, you should check out these stats – OCC, Blogging The Boys

How do active NFL QBs measure up when it comes to games with a passer rating of 100 or more? The Cool One sorts out some interesting numbers we should all keep in mind when determining just how good Prescott is.

If you sort the table by “Good Game Percentage” you’ll see that Aaron Rodgers throws more 100+ rating games than anybody else in the league, and he does it consistently. His rate of 56% leads all other QBs by quite a margin. Second on this list, and probably a surprise for most people reading this table, is Dak Prescott. With a 51% good game percentage, Prescott has the second-highest percentage of 100+ rating games of all NFL QBs, ahead of Russell Wilson (50%), Tom Brady (48%) and Drew Brees (48%).

If you judge a QB by the company he keeps, Cowboys fans should be quite happy with Dak Prescott, as he is in pretty good company in this ranking. And he also compares favorably to Tony Romo, who managed 64 100+ games in his 125 career starts, a 51.2% rate.

Banner was a guest on the Rich Eisen Show recently and he shared his thoughts about Prescott’s contract situation.

“It’s a mistake. I said this for years when I was at the Eagles, if you have a player you know you want to keep the only thing waiting does is increase the price. So, as they sit here and wait on Cooper and Prescott, we all know they are going to keep them. The only thing that is happening is that it’s becoming more expensive to keep those guys. And they should’ve realized Jared Goff or Wentz would get signed and that’s only gonna make their deal more expensive. “They’ll get a deal done and it won’t be massively more than it would’ve been, but the longer they wait the higher the price is gonna be.”

5 Takeaways from Dallas Cowboys OTA’s – John Williams, Inside The Star

Five takeaways from the team’s organized team activities, including how their quarterback is taking more shots downfield.

Much has been made, and possibly exaggerated, of Dak’s ability to throw deep in the passing game from 2018. In 2018, Prescott ranked 16th in attempts that traveled 20 yards or more down the field. He was 19th in completions and 18th in adjusted completion percentage among players with at least 46 attempts., per Pro Football Focus. Though Dak was middle of the pack in those stats, he was fourth in passer rating on throws greater than 20 yards. It’s an area that definitely required some improvement, but not nearly as bad as some would make it out to be.

One of the constant themes from these practices were the reports of Dak Prescott’s deep passing ability. On Wednesday in particular, it sounded like every throw he completed was going deep down the field. Now, that’s not the case, but from the reports, it sounds like he’s gotten more accurate and more confident with his deep ball. Dak Prescott doesn’t have to become Patrick Mahomes when throwing deep, but improvement should always be the goal. Even if he’s only marginally better throwing deep in 2019, it’s going to make the offense a lot better as teams can’t sit on the underneath stuff or stack the box against Ezekiel Elliott.

The second-year pass rusher is taking advantage of extra opportunities in OTA’s.

Based on comments made by Defensive Coordinator Rod Marinelli after Dallas wrapped up the voluntary OTA process, Armstrong may be turning the corner just as Jones predicted. “He’s climbing right now. You’ve probably seen him a little bit, but his speed is coming. I just think once you’re in the second year in that system, it really starts kicking in. He’s got a really good long arm, working that as a pass rush move. He’s really showing up this camp.” With a fierce battle ahead of him, Armstrong has put his bid in motion and now he looks to finish strong once the pads begin to crack in July.

While the excitement is high for plenty of the new guys on the roster, Mickey Spagnola from the Mothership gives some love to a familiar face.

And to think he did all of this with a bum shoulder.

He is spending his time rehabbing, working on his conditioning with the trainers. And working hard, mind you. I’m told he is right where he needs to be here in early June. The shoulder repair is solid. He’s already doing some lifting. And while the team has been going through these OTA practices, Lawrence has been outdoors doing his conditioning work. Doesn’t seem to be resting on his millions. Even the hard-nosed Rod Marinelli says of Lawrence, “He’s doing good. … He’s locked in, can’t wait to get him going.”