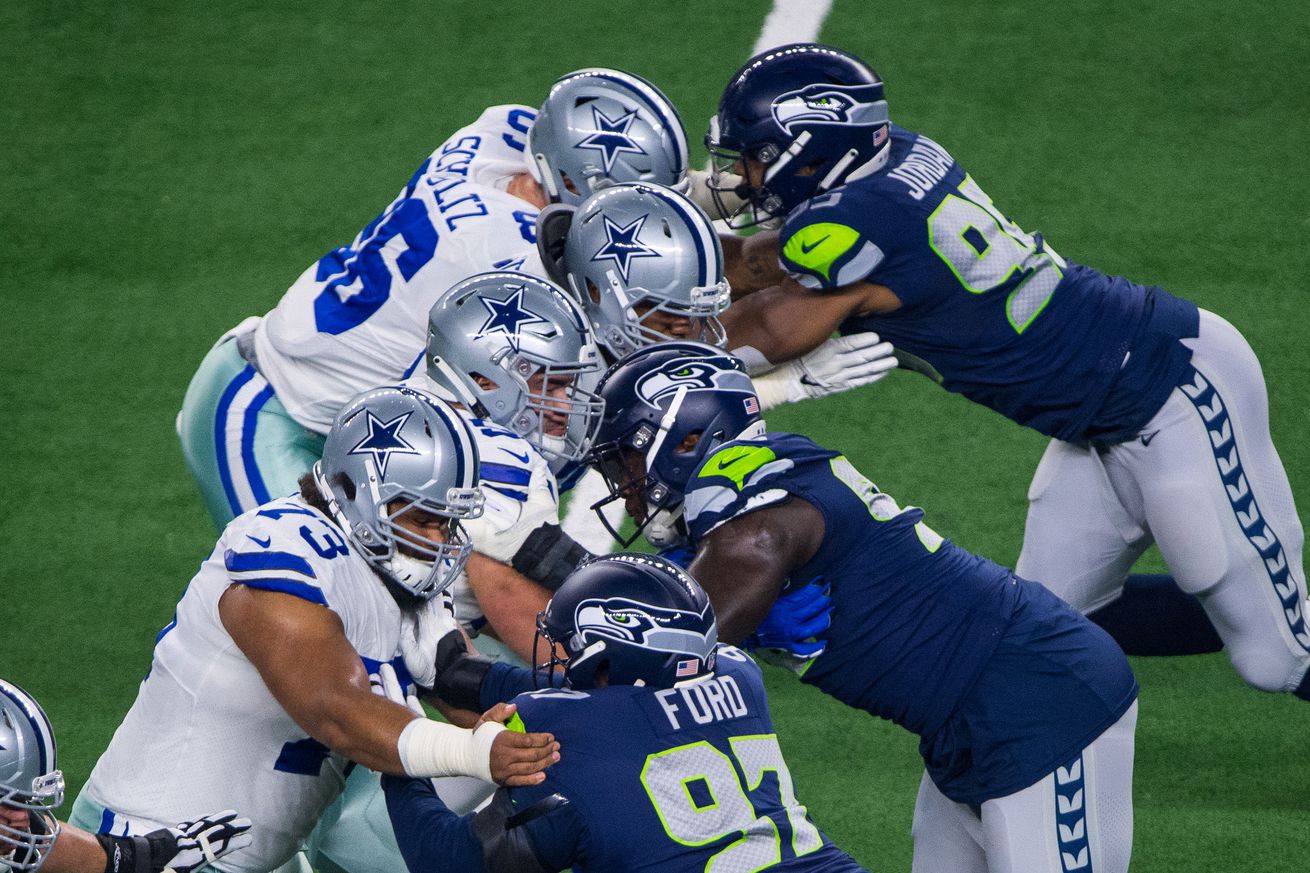 Looking at the offensive line in Dallas.

Continuing our series of looking at positional groups. Today, we look at the big uglies.

The Dallas Cowboys built its team by drafting offensive linemen in high rounds. Tyron Smith was a top-ten pick back in 2011, while fellow All-Pros Zack Martin and Travis Frederick were also selected on the draft’s first day. Connor Williams was a top-50 pick, La’el Collins was thought to be a potential first-rounder before some off-field news clouded his stock, and the team added Connor McGovern with its second selection this year.

2014 and 2016 were two highlights of The Great Wall of Dallas, as the team ran the ball down opponents’ throats and enforced its will week in and week out. While the team is still built through the run game, the offensive line has taken a step back since Dak Prescott’s and Ezekiel Elliott’s rookie season. That can be attributed to continuity issues, coaching changes, inexperience, and most certainly injuries.

The good news is that the Cowboys could have its center back for the upcoming season. Joe Looney played well at times last season, but there is a clear difference between he and three-time All-Pro center Frederick. If Frederick is back in the fold, that should only improve the Cowboys’ rushing attack as well as give more time for Dak Prescott to find the open man.

Tyron Smith is one of the most dominant left tackles in the game. While he is not on the level in which he was during his prime, Smith is still an above average offensive tackle and the offense feels his loss when he is not in the game. Zack Martin is the best offensive guard in football, as the All-Pro opens up running lanes for Ezekiel Elliott and helps protect quarterback Dak Prescott. Martin did get banged up last season, but there is no reason to expect Martin to be less than his All-Pro self.

La’el Collins will be anchoring the right tackle spot for the Dallas Cowboys, a position that he has played at since playing left guard for the first three games of 2016 (prior to injury and the emergence of Ron Leary). While some argue the former LSU Tigers lineman should be moved back to the inside, the Cowboys appear to be set on Collins locking down the opposite side of Smith.

The real battle of the offensive line is the left guard position. Dallas spent its second-round selection on Coppell native Connor Williams in 2018 and then selected Penn State’s Connor McGovern in the third this April. Williams had bright spots last season, but it was clear that he still needed to adjust to the NFL level — which is to be expected, of course. McGovern finished a productive career with Penn State before the Cowboys grabbed him with the 90th pick. Dane Brugler had this to say about the Cowboys’ draft pick, even saying that he is the “best player” that Dallas drafted:

Brugler: “I love their third round pick, Connor McGovern. In my opinion he’s the best player that they drafted. And I think there’s a good chance he starts Day 1 at one of the guard spots. He’s that good. He gives you versatility where he can help out at center if need be (and) it’s gonna give you some freedom to possibly kick Connor Williams outside. Their third-round pick, in my opinion, was better than their second-round pick.”

That will be a situation to keep an eye on: who starts next to Tyron? With Xavier Sua’Filo expected to be in the fold as well, the Cowboys should have some good competition for that spot.

Obviously, the biggest storyline regarding the offensive line heading into 2019 is the health of Travis Frederick. If Fred is back — and is anywhere close to what he used to be — that will mean big things for the offense as a whole. Looney, as mentioned above, filled in nicely in 2018, but there is a difference between those two centers in talent and even making sure everybody is in their correct position and assignment.

The Cowboys seem primed to take the next step. Dak is fully entrenched behind center, Amari Cooper has a full offseason within the organization, and Randall Cobb looks to add another weapon to the offense. Jason Witten is back in the locker room and Zeke is Zeke.

Kellen Moore is expected to add some wrinkles to this offense, but there is no denying how important the front five are for the success of this team. How will the offensive line perform in 2019?