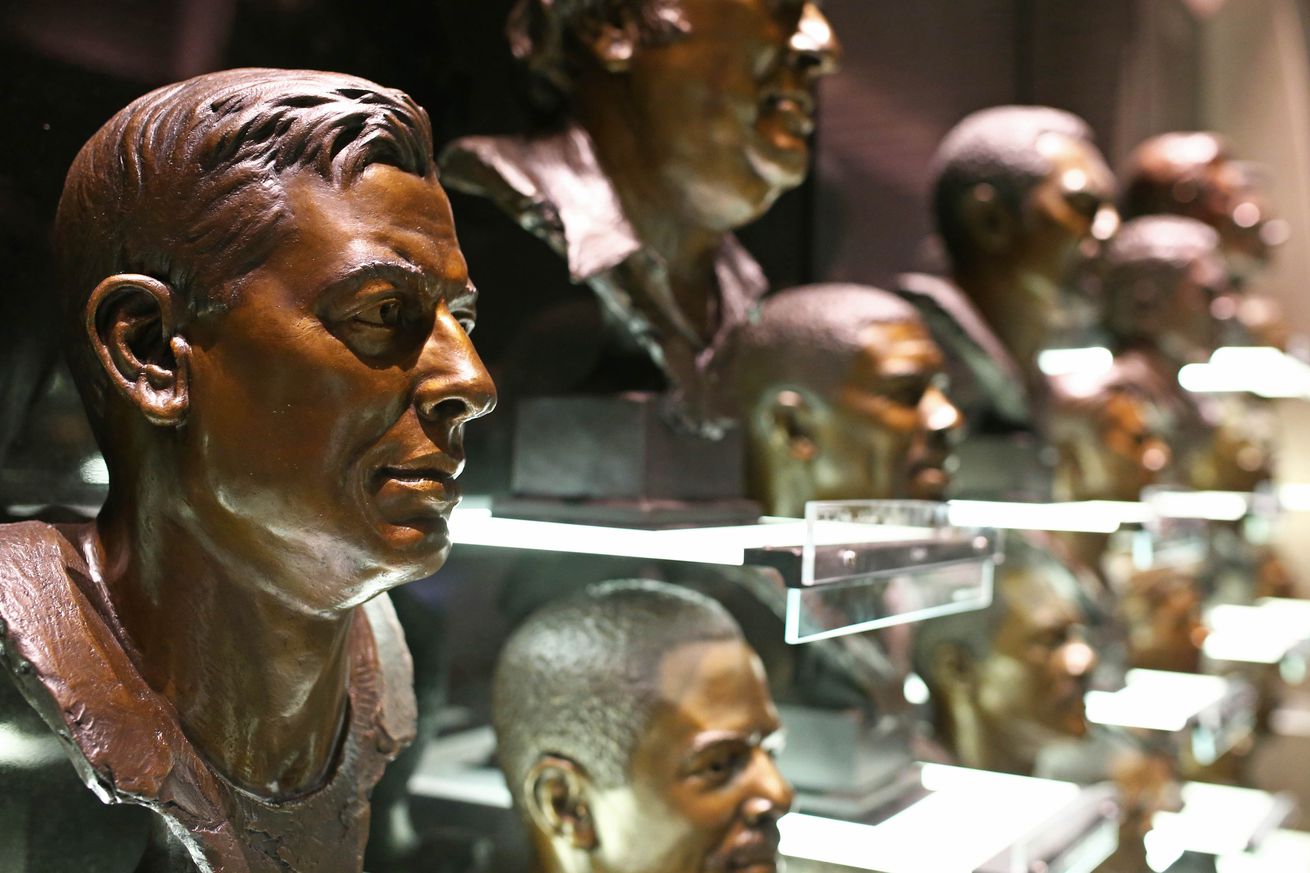 Get your daily dose of news…

NFL teams ranked by their franchise QBs: Cowboys, 49ers on top – Ali Bhanpuri, NFL.com
This is an interesting exercise… listing the “franchise caliber” quarterbacks for each NFL franchise. Where do the Cowboys rank? Let’s just say we’ve all been spoiled for 50 years.

Who qualifies for the Cowboys?

The Cowboys have had above-average-to-great quarterback play consistently for almost 50 years, with five Super Bowl titles and 19 Pro Bowl selections combined between their franchise guys. As a Bears fan, I just can’t wrap my head around this.

To understand just how spoiled we’ve been, consider the Chicago Bears.

Who qualifies for the Bears?

McMahon’s ring is really the only reason the Bears aren’t last. If Mitchell Trubisky keeps developing, though, there’s legit hope the Bears could actually improve their ranking.

NFC East franchise quarterbacks: Who’s Cowboys’ best QB1? – Ali Bhanpuri, NFL.com
As a reminder, here’s the post reviewing all the Cowboys’ franchise QB and determining who ranks first among many.

There’s definitely a case for Aikman, but Staubach and his ‘70s Cowboys were just so damn efficient. Staubach won 85 starts for the Cowboys compared with 94 for Aikman, and they have comparable touchdown totals, fourth-quarter comebacks and game-winning drives, but Staubach started 51 fewer games. He had a .746 winning percentage! While Aikman’s three Super Bowl wins to Staubach’s two might tilt the scales in No. 8’s favor, Staubach’s total of six conference championship appearances to Aikman’s four quiets that argument some. It’s close, but I’m going with the guy who led the NFL in passer rating four times.

NFL Draft Inventory: The best picks still on each roster – Dane Brugler, The Athletic
The draft guru looks at each NFL team and notes the best Day 1, Day 2 and Day 3 draft pick still on each team’s roster. The Cowboys have an abundance of quality players at each spot.

There is no shortage of options here for the Cowboys as they have drafted extremely well in the first round with left tackle Tyron Smith, right guard Zack Martin, cornerback Byron Jones and linebacker Leighton Vander Esch all competing for Pro Bowls (and center Travis Frederick when healthy). However, I am going with Elliott because he is arguably the best player at his position.

Linebacker Jaylon Smith is making a strong case for this spot, but Lawrence (when healthy) is one of the top-five pass rushers. He combined for 25 sacks the past two seasons and is the type of difference-maker opposing offenses must factor into their game plan.

Although not without his warts, Prescott has far outplayed expectations and has been an integral reason for the Cowboys’ two NFC East titles in the last three seasons. He is one of the best Day 3 picks currently playing.

Iloka Aiming For The Best Year Of His Career – David Helman, DallasCowboys.com
The Cowboys chose to dip into the free agent market to bring in some depth at the safety position. Helman catches up with veteran George Iloka, who thinks he’ll fit in with the Cowboys’ defensive scheme.

It’ll be interesting to see what exactly it looks like when Iloka gets acclimated. Over the course of seven NFL seasons with Cincinnati and Minnesota, he has made 79 career starts – which is one more start than every other safety on the Cowboys’ roster, combined.

Having said that, Iloka is still the obvious newcomer to a situation that features two incumbent starters. As might be expected, Jeff Heath and Xavier Woods have taken first-team reps throughout OTAs, while Iloka has worked with the second string defense.

Whether Iloka pushes for a starting job remains to be seen. But he said Wednesday that he likes the way the Cowboys deploy the strong safety close to the line of scrimmage in their scheme, and he’s excited for the chance to do that.

“I came here, honestly, because they gave me an opportunity,” he said. “It’s a different scheme from what I’ve played in the first seven years of my career, and I wanted to get into this system.”

Reintroducing A Receiver To Watch This Summer – Rob Phillips, DallasCowboys.com
The Cowboys have, literally, a dozen wide receivers on the current roster. Those competing for spots four through six face stiff competition. Could last year’s sixth-round pick, Cedric Wilson, be one to make the final grade?

The 2018 sixth-round draft pick had never missed a year of football before. Now he’s back to battle for a roster spot in a crowded 12-man receiver group that includes six players (counting himself) no older than 23.

“Coming back off the rehab was tough in general,” Wilson said. “But definitely a year of just seeing how everything goes, the speed is definitely slowing down. Just getting back in the playbook and learning from older guys of what I need to do and doing what the coaches expect of me.”

The Cowboys liked Wilson’s progress before the injury last summer. One of six Boise State alumni on the Cowboys’ current roster, he played outside and the slot in college and showed some early production in the offseason workouts.

The Best NFL Free Agents Still on the Market – Danny Kelly, The Ringer
A familiar name shows up among the still-available free agents. Under the idea of “you can never have too many cover players” would the Cowboys be interested in a reunion?

Claiborne never lived up to his billing as the sixth overall pick by the Cowboys back in 2012, but he’s quietly developed into a solid cover corner who racked up two picks and 14 passes defensed for the Jets last year in 15 games. Injuries plagued Claiborne during his five seasons in Dallas, but the 29-year-old vet has missed just two games in the past two seasons and has the talent to boost the depth of a number of defensive secondaries around the league.

The Chiefs could add a little bit of insurance behind free-agent addition Bashaud Breeland, who played just seven games last year while battling hamstring and groin injuries. The Jets are anything but set at the position and would make sense as a return location. And the Cardinals lack experienced depth, especially early in the year when Patrick Peterson will be serving a six-game suspension. Claiborne reportedly turned down a veteran minimum offer in Tampa Bay to hold out for a better offer. He could end up getting one in the next few weeks, but could gain a little leverage by waiting to see whether any teams suffer injuries at corner during training camp or the preseason.

Lawrence had a slow start to his career. The 2014 second-round pick earned sub-72.0 pass-rush grades in each of his first three seasons in the NFL before exploding in Year 4 (2017).

In 2017, Lawrence posted a 91.6 overall grade — the highest single-season overall grade ever earned by a Dallas Cowboys defender in the PFF era (2006 – present). In addition to this, Lawrence also recorded the highest pass-rush win rate (24.0%) and the second-highest pressure rate (18.6%). However, Lawrence’s astounding 2017 season wasn’t just a one-hit wonder.

During the 2018 regular season, Lawrence put up an 89.5 overall grade (seventh), an 84.4 pass-rush grade (ninth), 44 defensive stops (fourth) and 63 total pressures (15th). And that astonishing two-year stretch has quite rightly catapulted him into the conversation for the NFL’s best young pass-rusher. Since 2017, Lawrence’s 91.4 pass-rush grade is the second-highest among edge defenders, trailing only Von Miller. Moreover, his 19.4% pass-rush win rate and 15.5% pressure rate in that timespan rank sixth and fifth among his position group, respectively.

Jerry Jones already has the world’s most valuable sports franchise. His oil and gas company now has become the leading producer in one of the nation’s largest natural gas basins.

Back From Retirement, Jason Witten Wants his Snaps With Cowboys – Staff, NBC 5 Dallas-Fort Worth
Ask about playing time among a group of decidedly younger tight ends, and, well, the franchise leader in catches and yards receiving doesn’t seem quite sure what to say.

In other words, an 11-time Pro Bowler many consider an easy choice for the Pro Football Hall of Fame whenever he retires for good just isn’t comfortable accepting the idea of fewer snaps when he took almost all of them for 15 years.

“Those coaches work long hours; they’re smart,” Witten said a week before getting all the first-team reps in the only offseason practice reporters saw in which he participated. “I think that I can’t worry about how that plays out. My job is to kind of make it tough on them. We all benefit if that’s the case.”