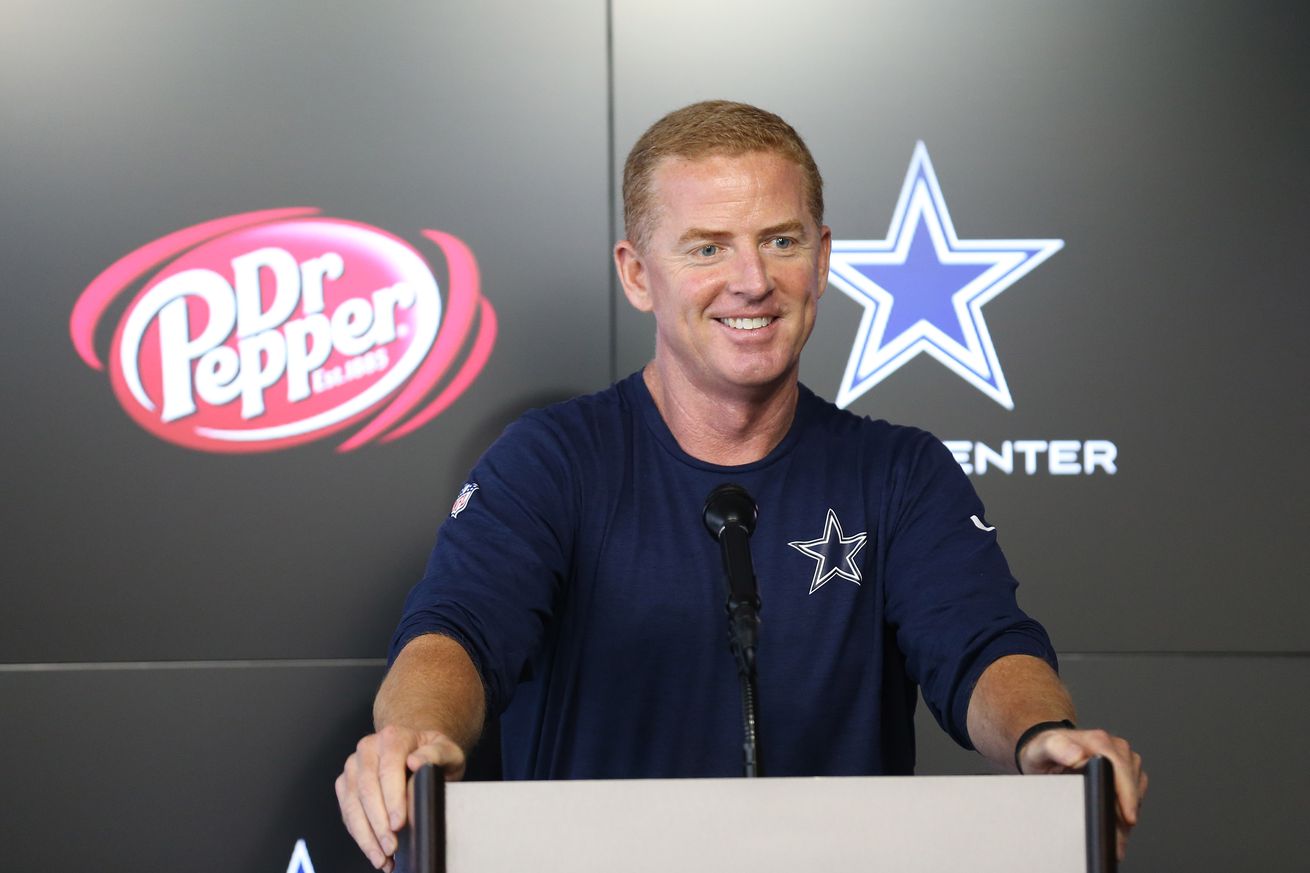 The Dallas Cowboys have completed OTAs and will begin their minicamp today. Jason Garrett took to the podium on Tuesday to break it all down. Here’s what he had to say. All answers are paraphrases and not actual quotes.

Is minicamp just a continuation of the entire offseason?

Jason Garrett was firm in that everything the Cowboys have done this offseason has been relatively consistent. While things are now mandatory he noted that the team has been fortunate to have guys coming in and haven’t really dealt with that issue.

Practices are now longer and Garrett did explain that they like to use the time for situational simulations. They can also review film in meetings after practices with a longer day allowed in minicamp.

Helping rookies getting up to speed?

While the veterans have some restrictions as far as time to practice that is not the case for rookies. Jason Garrett noted that strength and conditioning for the new guys is very important so that they can get into the proper shape, but there is a lot of scheme work and technique understanding so that they can have a chance.

Will the injured guys be the same as during OTAs?

Key players have been participating

As mentioned the Cowboys have been quite fortunate to have their stars participating throughout the offseason. Jason Garrett mentioned how lucky they are to have so many players live in the DFW area and that them being around the facility is a great thing for overall team chemistry and the bonds necessary in football.

Garrett noted they are making strides and that the important thing is during this time of year to keep the reps equitable. When they run a 12-play set in practice, they want to split the reps 4-4-4 for each QB.

One of the longest-tenured players on the Cowboys is long-snapper L.P. Ladouceur. He happens to be Canadian and after having some fun pronouncing his name in the French dialect, Jason Garrett went on and on showering L.P. with praise. He noted that he’s had a big impact on the Cowboys and that they’re lucky to have him.

How do they go about goal setting?

Jason Garrett explained that the tangible goal is to win the Super Bowl, but there are a lot of steps along the way. He described that winning the division and playoff games en route to the game of all games are part of the process, but there are other goals laid out in terms of in-house expectations.

What are you looking for with Kellen Moore?

Coach discussed that you have to figure things out in terms of how you’re going to handle things and manage resources, and that leadership is emphasized across the board and staff. He noted that things are basically the same among all the coaches as to what they emphasize quality coaching at all times.

Sean Lee in a different role, what are the conversations like with him?

Jason Garrett danced around going into detail as far as what the Cowboys are expecting of him this season, but he did note that he’s been the same leader as always up to this point. He also explained that there’s no “acceptance” necessary for Lee, things just are what they are. He commented on the fact that Lee likes to compete and that he has practiced at SAM linebacker, other linebacker spots and has even jumped in on special teams.

The NFL has altered a few rules this offseaosn and the subject of expanded replay has been on the table for discussion. Jason Garrett didn’t go into too much detail as far as what’s going to happen, but he noted the back and forth has been great for him.

Garrett is someone who other coaches across the league mentioned as a strong voice when the result of the NFC Championship Game was being debated in terms of rules changes. He’s clearly someone who is a big voice in those types of conversations.

Tyrone Crawford will be at practice, but will not be practicing

Jason Garrett noted that Showers is one of the most “right kind of guy” guys that there is, and he explained that Showers has continued to make progress.

Garrett reiterated that Jason Witten is doing well in his re-joining of the team. He was naturally very complimentary of Witten.

How do you evaluate offensive linemen when not in pads?

Garrett explained that you simply evaluate based on the environment that you’re in. There’s obviously a difference between in pads and not in pads, but the level of competition and athleticism is still happening which is worth evaluating.

Any adjustment necessary for Travis Frederick?

Garrett discussed the quality of person that Travis is and how involved he was last season in terms of communication. He explained that there’s always rust necessary to knock off, but that he should be fine.

What do you need to see from Rico Gathers?

Garrett said they want to see him continue to grow but also noted that the tight end has gotten better every year and became more of a professional. He explained that this isn’t an easy position as there are a lot of variables involved, so they just want him to a point where they feel comfortable putting him in and asking him to do different things at the position.

Additional note not discussed at the press conference: