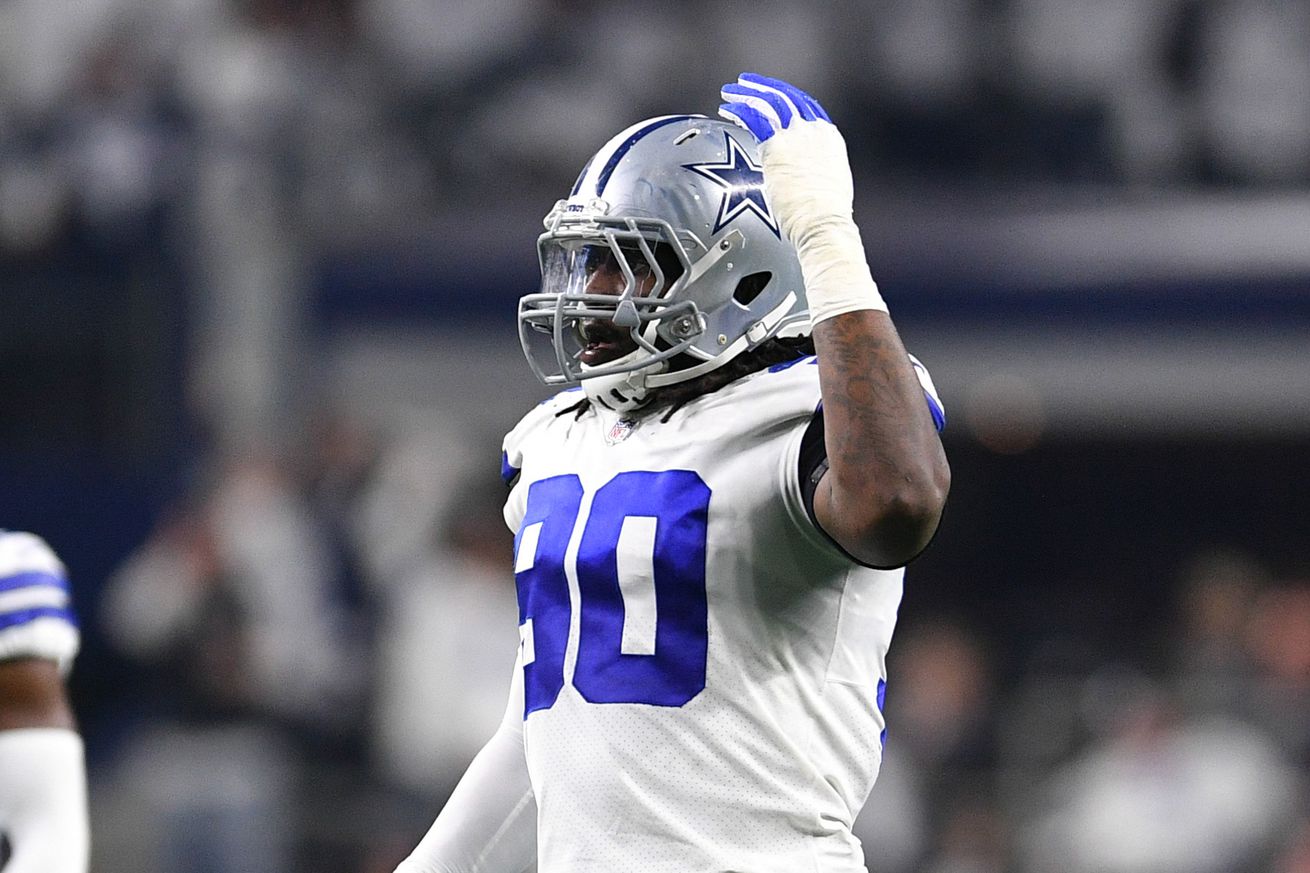 DeMarcus Lawrence has not contributed in any of the offseason programs due to rehabbing his shoulder, but things seem to be looking up for the Cowboys franchise pass rusher.

The Cowboys haven’t specified when Lawrence will return from offseason shoulder surgery. But Garrett declared that he’s optimistic about the timelines of Lawrence and cornerback Byron Jones, who had hip surgery in March. The two Pro Bowl defenders are the only two Cowboys expected to begin training camp on the physically unable to perform list. The club isn’t concerned that their recovery calendars will trickle into the regular season.

”There are a number of guys who have been out and coming back from surgeries. We feel good about the timetable of all of those guys,” Garrett said. “Each of them has handled their rehab the right way, so they’re all on schedule if not ahead of schedule.”

Will this Cowboys player be at training camp after being disciplined by the NFL Friday? – Clarence Hill, Star-Telegram

Another day, another suspension. Could this end this players tenure with the Cowboys?

Cowboys tight end Rico Gathers has been suspended for the first game of the 2019 regular season for violating the league’s substance-abuse policy, the NFL announced on Friday.

Gathers is eligible to participate in all off-season and preseason practices and games, including training camp. He will be eligible to return to the Cowboys’ active roster on September 9 following the team’s September 8 game against the New York Giants.

The suspension stems from when Gathers was arrested last September by Frisco police for marijuana possession after being caught smoking on a bench.

The playmaker weighs in on the Dak contract situation.

”Every day [the Cowboys] wait, it’s costing money,” Irvin said Friday on 105.3 The Fan’s Shan and RJ show [KRLD-FM]. “This is an asset that’s trending in the right direction. You have to pay him this money. Dak’s agents are not going to let you come in under Carson Wentz.”

The Pro Football Hall of Famer also suggested that not signing Prescott could have a negative impact on the rest of the team.

”If they don’t pay Dak, we can all pack it up and go home,” Irvin said. “It’s over. How are you going to get anything out of the other guys if they’re seeing that you aren’t taking care of the top guy?

With Carson Wentz signed, and Jared Goff on deck, the Cowboys need to strike while the iron is hot.

Handing out a new contract to quarterback Dak Prescott has hung over the Dallas Cowboys offseason from the jump. While they got top-tier defensive end DeMarcus Lawrence taken care of, paying the franchise signal-caller has been a hot topic since the Divisional Round loss to the Rams. However, the time has since passed to end the debate and pay No. 4.

Yes, that’s a daunting proposition for owner Jerry Jones and the Cowboys. Per a report from Clarence Hill Jr. at the Fort Worth Star-Telegram, Prescott’s agent has thrown out a figure of $34 million per year. It’s worth noting that this could be the high end of negotiations but it’s still relevant to get a ballpark idea of how much Dallas will have to pay the quarterback.

Having said that, this is a league where you have to pay quarterbacks inordinate amounts of money to keep them around. That’s why teams like the aforementioned Rams have rushed to build their rosters quickly with their quarterback on a rookie deal. A rookie contract under center makes filling out the rest of the 52 spots that much easier in terms of the salary cap.

With OTA’s in the books, sort through the top 10 biggest surprises that the mothership crew put together.

Whether it’s training camp, the regular season or OTAs, there are givens with this team. On a roster with 14 Pro Bowlers, it shouldn’t be a surprise to see Zack Martin or Ezekiel Elliott playing well. We know Amari Cooper is going to deliver big plays.

So this isn’t a list of the Cowboys’ 10 best players during spring practices. Rather, this is a list of the guys we weren’t looking for. Whether it was a newcomer to the team or a young player who took a big step, this is a look at 10 pleasant surprises from the offseason program.

The wide receiver room has seen an extreme makeover over the last two seasons. Will it be for the better?

Rob: I don’t think speed will be the only factor in deciding the wide receiver group, but it’s an important quality. To your point, receivers coach Sanjay Lal says it’s so vital to stretch the defense deep because everything else (comebacks, slants, etc.) is easier if you have that vertical threat. It’s no coincidence that their two undrafted receivers, Jalen Guyton and Jon’Vea Johnson, can get down the field in a hurry. Whether either makes the team remains to be seen.

AMARI COOPER SAYS HE’S FOCUSED ON FOOTBALL, NOT HIS NEXT CONTRACT – Kevin Brady, Inside the Star

Amari Cooper is next in-line to receive a massive new contract, but he’s only focused on getting better as a football player.

In just 9 games with the Cowboys last season, he caught 53 passes for 725 yards and 6 touchdowns. He quickly gained the trust of quarterback Dak Prescott, and exhibited a chemistry with the young passer that no one else really has to this point. Outside of maybe Cole Beasley in 2016, perhaps.

While the football world seems to be focusing on what Amari Cooper’s contract will look like after 2019, the receiver himself claims to be solely focused on the upcoming season. Cooper spoke with ESPN’s Todd Archer about this very subject, emphasizing where his mind lies at this time.

Amari Cooper has just one year left on his contract as he plays under the fifth year option from his rookie deal. Cooper will make $13.9 million this season, putting him behind some of the league’s other WR1s like Odell Beckham Jr., Mike Evans, Antonio Brown, and DeAndre Hopkins.