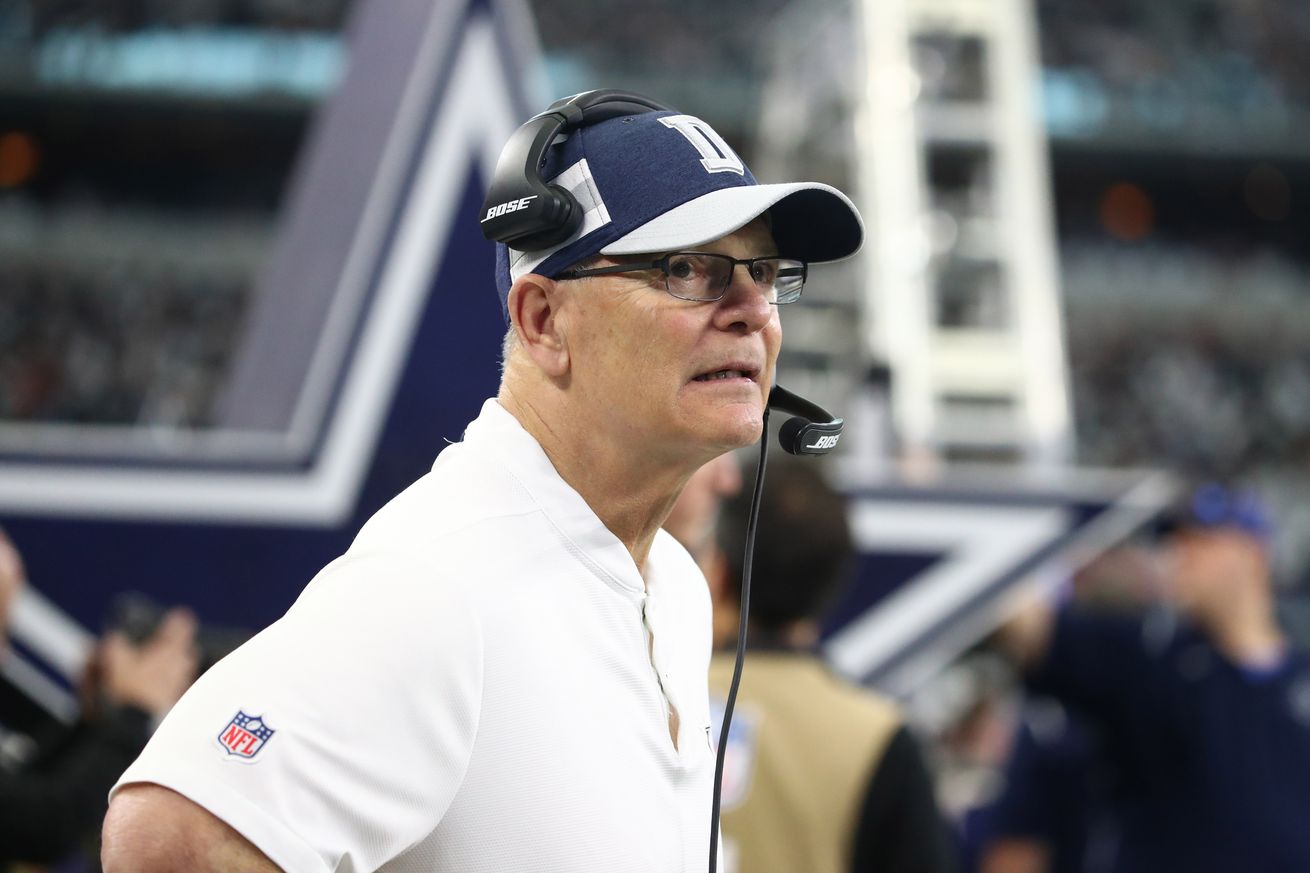 ‘He’s got some juice now’: How DE Robert Quinn has transitioned to Dallas and impressed the Cowboys – Jon Machota, Sports Day

Veteran pass rusher Robert Quinn is energized and ready to roll wearing a star in 2019. He and DeMacus Lawrence are Marinelli’s “racing lizards.”

”I’ve just really been impressed with his work habits here,” Marinelli said of Quinn. “He’s a real pro. He comes to work every day. Effort. Details. He doesn’t say much. And I’m telling you, he’s really going to be a good run defender, just like D-Law.

”We got racing lizards over there that can play the run.”

Quinn was the first-team right defensive end throughout organized team activities and minicamp. With right DE Randy Gregory suspended indefinitely for violating the NFL’s substance abuse policy, Quinn will be given every opportunity to be among the team’s sack leaders this season.

The WR market is taking shape and may soon set the standard for the Cowboys and Amari Cooper.

That $22 million number is significantly higher than the current highest deal for Odell Beckham, Jr. That $18 million a year number the Saints have thrown out there would match what Beckham, Jr. is getting. Here are the wide receivers getting over $16 million a year.

Amari Cooper’s camp is surely watching what is going on with the Thomas negotiations. Thomas has put together a very strong three years in the NFL, but his stats are no doubt buoyed by the combo of Drew Brees’ skill and Sean Payton’s offensive acumen.

COWBOYS RB TONY POLLARD IS MOST CRITICAL ROOKIE TO 2019 SUCCESS – Jess Haynie, Inside the Star

Which rookie from the 2019 class needs to have the best rookie year for the class to be considered a success?

Unless Trysten hits the ground running in an exceptional way, he is going to have an uphill climb to earn playing time over these players. Some would argue that Hill’s situation isn’t that different from Connor McGovern’s; he’s here for a year of development before replacing guys like Collins and Crawford in 2020.

The point here is that if Hill and McGovern don’t play much in 2019, be it by design or by injury, the team shouldn’t feel the loss that much. And even if these guys do play a lot, their impact potential as rookies is unlikely to exceed their veteran teammates.

This is where Tony Pollard is different.

Not only may he be relied upon for a crucial role, but Pollard has a chance to bring a unique element to the offense. He can potentially give Dallas something it hasn’t had since at least Lance Dunbar, and hopefully to a greater degree than Dunbar was capable of.

The Cowboys have a few “projects” on their roster in 2019, but Dorance Armstrong may just be forcing his way to the top of the list.

Dorance Armstrong provided little to no pass rush as a rookie. The Dallas Cowboys expect far more in 2019.

”He’s climbing right now,” defensive coordinator Rod Marinelli said during organized team activities, per Rob Phillips and David Helman of the team’s official site. “You’ve probably seen him a little bit, but his speed is coming. I just think once you’re in the second year in that system, it really starts kicking in.”

Demarcus Lawrence is counted among the league’s best young pass-rushers, and his recent $105 million contract extension reflects his status. But the Cowboys lacked a true bookend. The organization traded for Robert Quinn this offseason.

50 NFL players who could get contract extensions before training camp – Dan Graziano, ESPN.com

Cowboys players are up and down the contract extension list, including Amari Cooper.

Which brings me to Cooper, who’s both the youngest of the group (just turned 25 on Monday) and has the highest current 2019 salary. Cooper hasn’t produced the way the other three have, but do not rule out the possibility that he ends up making more than all of them. The Cowboys know that if they let him play out this year on the option and franchise him next year, they’d be paying him more than $31 million guaranteed over two seasons. That’s the starting point if you’re Joel Segal, his agent, and Segal is not to be underestimated. A year ago, most people would have predicted that Aaron Donald would be the highest-paid defensive player once his extension was signed. But Khalil Mack waited out the Donald situation, got himself traded to the Chicago Bears and signed a deal bigger than Donald’s. Want to guess who Mack’s agent is?

WILL LB JAYLON SMITH EARN HIS FIRST PRO BOWL TRIP IN 2019? – Mauricio Rodriguez, Inside the Star

In a recent NFL.com article, Marc Sessler predicted a first-time Pro-Bowler for each of the NFL teams and Smith was the guy for the Dallas Cowboys. To be honest, I wouldn’t have picked anyone else. What Jaylon did in 2018 was absolutely remarkable and should only be better in the upcoming season.

His career in the NFL didn’t begin quite as planned since the moment in which he seriously injured his knee during his final bowl game in Notre Dame. After tumbling all the way into the second round in the 2016 NFL Draft, he had to sit out hist first season in the pros and finally got playing time in 2017. Even then, he clearly was far from being 100% healthy. It wasn’t until last year that we saw the Jaylon Smith we witnessed playing for the Fighting Irish on Saturdays.

In 2018, Smith racked up 121 tackles (82 solo), six tackles for loss, four sacks and two forced fumbles. Talk about a breakout season! He went from playing in 55% of the defensive snaps in 2017 to lining up in 95% of them last year. He also had a lot of success when rushing the passer, something the Cowboys did more with their linebackers thanks to Kris Richard’s influence on the defensive gameplan.

It was obvious Cowboys needed a No. 1 WR last year. Will their need for a safety upgrade play out similarly? – Kevin Sherrington, Sports Day

The Cowboys had to find out the hard way what it was like to not have a #1 WR last season, could they go through a similar situation in 2019, but at the safety position?

Q: It was obvious to most that not having a No. 1 receiver was going to be detrimental to the passing game last year. The Cowboys labored through a half season before they admitted they were wrong and traded for Cooper. This year, it seems obvious to all that safety is the glaring position in need of an upgrade. Is this going to play out similarly? Who is the stubborn one on the Cowboys who is saying everyone else is wrong?

Sherrington: Good points. Even though I was practically Earl Thomas’ agent last year, I don’t think the problem on defense is quite the same as the one on offense. Let’s back up a little: I wasn’t sure what Allen Hurns would be able to contribute. He had a 1,000-yard season on his resume, so I was willing to give the Cowboys the benefit of the doubt. Then the season started and it was clear there was practically no chemistry between Dak Prescott and Hurns, who wasn’t close to being a No. 1 receiver. Cooper answered that. A No. 1 WR is more important than a free safety in the NFL.