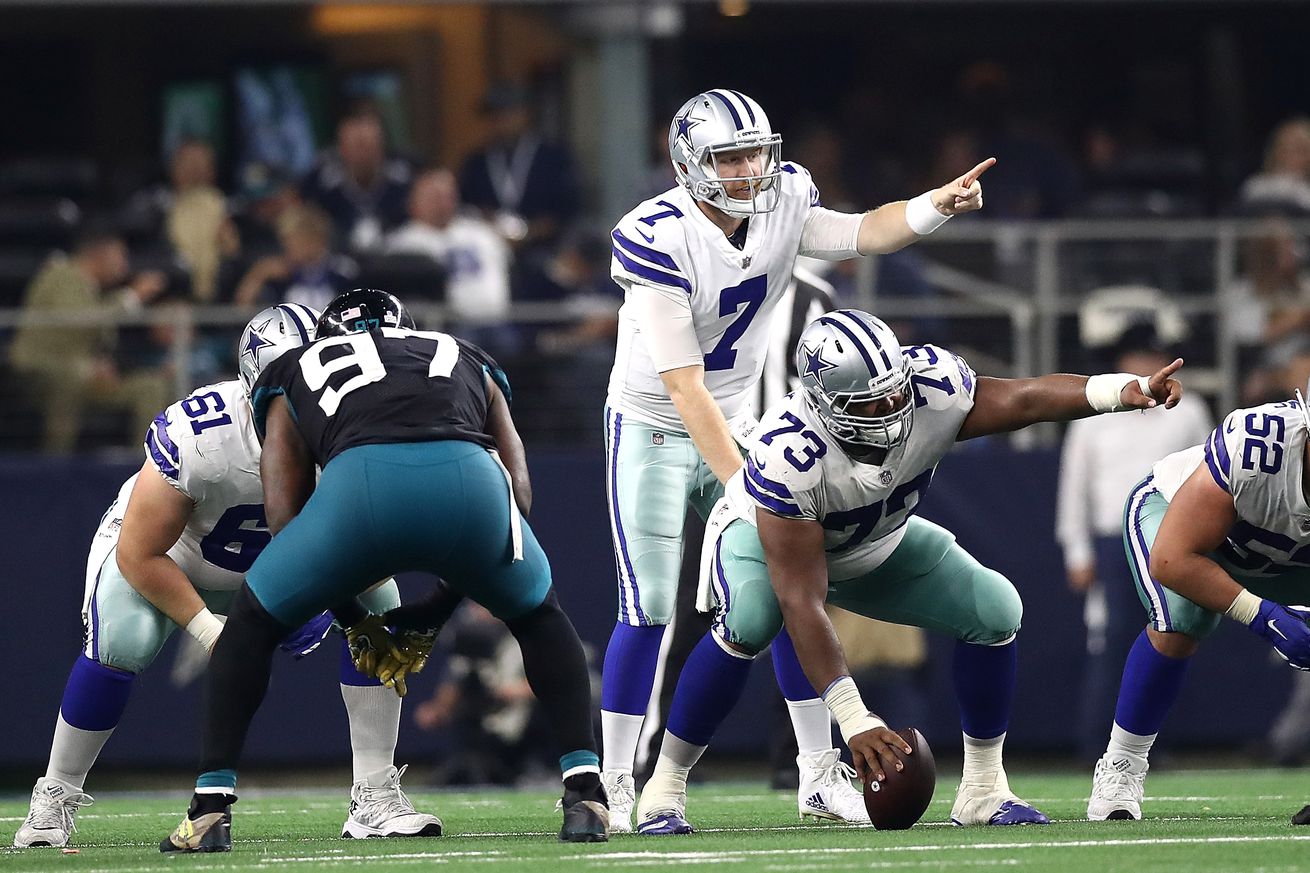 Check out where Bleacher Report has the Cowboys backup quarterback situation ranked in the NFL.

It’s hardly any prettier behind Dallas Cowboys starter Dak Prescott. Rush is a 2017 undrafted free agent with one completed pass on three career attempts, while White has yet to make an impact as a 2018 fifth-round selection.

The two appear to be in a close competition for the primary backup spot, and they did appear to practice well as the Cowboys closed out minicamp last week. But longtime NFL scout Bryan Broaddus also asked why it took “13 practices for them to have a good one.”

”The current backup quarterback is not on this roster,” said Broaddus, who added that the Cowboys ”cannot sacrifice this season if something happens to Dak Prescott, and they’re playing with these two guys. It’s just not going to work out that way.”

SHOULD COWBOYS CONSIDER BRINGING BACK ALEX TANNEY AS BACKUP QB? – Jess Haynie, Inside the Star

With how poorly the backup quarterback situation is viewed around the league, could a move potentially be made to help the situation?

After spending last year with the Giants as the backup QB but never having to play, Tanney re-signed with New York for a two year deal this past March. But that was before the Giants spent their first-round pick on QB Daniel Jones

New York has kept three quarterbacks on the roster the last two years, but only kept two in 2016. With a clear top-two of Manning and Jones, and Daniel obviously their QB of the future, could they decide to let their other passers go at final cuts?

By only giving Tanney $75,000 in guaranteed money on his new contract, the Giants certainly left themselves the option of cutting him.

Alex Tanney now has seven years of NFL experience with multiple teams. He’ll have just spent a full year and a second offseason with one of the Cowboys’ division rivals, perhaps offering some insights into Pat Shurmur’s system.

Cowboys or Eagles? Is it possible the best two teams in the NFL are both in the NFC East? – Dan Rogers, Blogging the Boys

Are the two best teams in the NFL, both in the NFC East?

Last season, the team finished tied for third in the NFC after losing in the divisional round of the playoffs. The teams that finished ahead of them were the New Orleans Saints and the Los Angeles Rams. Most people expect those two teams to be the biggest obstacles standing in the way of a possible Super Bowl appearance this year. While both those opponents are certainly tough squads, the biggest threat to the Cowboys might be a little closer to home. Beware of the Philadelphia Eagles.

Now, nobody wants to hear something like that. The sour taste of their first ever Super Bowl victory is still something many of us haven’t been able to get out of our mouths. While sweeping them and reclaiming the East last season certainly helps, the Eagles are right back in the thick of things as one of the top contenders this upcoming season.

The disdain for the Eagles goes back a long ways for many of us fans. Over the past 27 years, both the Cowboys and Eagles have accounted for 70% of the division titles.

Agree or disagree with Maurice Jones-Drew?

Following his retirement in 2015, Jones-Drew became a member of the media and currently serves as an analyst for NFL.com. Recently, Jones-Drew released his top starting running backs in the NFL heading into 2019. Former Ohio State star and current Dallas Cowboys tailback Ezekiel Elliott was the lone Buckeye on the list and checked in at No. 4. Elliott is behind Jones-Drew’s top-ranked back, Saquon Barkley of the New York Gaints, New Orleans Saints’ Alvin Kamara and Le’Veon Bell, who signed with the New York Jets this offseason.

Here is what Jones-Drew wrote about Elliott:

Entering Year 4, Zeke will do what he’s always done: eat, eat and eat some more. The Cowboys’ offense runs through the two-time Pro Bowl selectee, who had a career- and league-high 381 touches in 2018. Elliott has been wildly productive, posting the fifth-highest average for rushing yards per game (101.2) by a player in his first three seasons in NFL history. He also became more of an asset in the pass game last season (career-high 77 catches) and should continue to improve this part of his game moving forward.

What led Robert Quinn to chose the Cowboys?

While he wasn’t exactly a free agent, Quinn did have the first opportunity of his career to go on a travel circuit, abbreviated as it might have been. Following his third season with the Rams, the club exercised their fifth-year option in April 2014 and signed him to a multi-year extension in September. With two years remaining he was traded to Miami in 2018 but a staff upheaval and eye towards tanking had the Dolphins ready to part ways. Dallas put the press on and was fortunate to land the edge rusher.

“Sometimes your gut leads you in the right direction,” Quinn told SportsDay. “I had people chirping in my ear both ways, but I just kind of relied on my gut, and so far it’s been a great transition for me.”

What version of Robert Quinn will the Cowboys be getting in 2019?

Cowboys defensive coordinator Rod Marinelli isn’t concerned about what Quinn has left at this point in his career. He believes the defensive end still has some “juice” left in his legs. He’s counting on Quinn to “bring some good stuff” to his defense this season.

In a perfect world, the Cowboys would see Quinn revert back to his stellar form he flashed for the Rams back in 2013. He posted an eye-popping 19 sacks for the then-St. Louis team that year en route to a Pro Bowl berth. That’s considerably better than the mediocre 6.5 sacks he tallied for the Dolphins in 2018.

Head coach Jason Garrett and his coaching staff should be satisfied with anything in between those two extremes. Quinn isn’t the same player he was during his prime, but he’s fully capable of using his experience in the league to produce sacks. He also should get plenty of one-on-one opportunities playing opposite Lawrence.

Is Sean Payton the next Cowboys coach? If Jason Garrett disappoints this year, it would be a perfect fit. – Jon Machota, Sports Day

If the Cowboys struggle in 2019, could a familiar coach make his way back to the big D?

Who could be the Cowboys new head coach if Garrett is fired?

Machota: ”I’ll never rule out Sean Payton. I won’t. … If they parted ways with Garrett, I will not believe that Sean Payton will (not) be their head coach until somebody else is in place and really, it won’t be until that actual press conference. I’ll actually have to see them to believe it. I’m telling you, being at some of the offseason things when all the NFL teams are there, like the Combine, Sean Payton fits in perfectly with the style of Stephen Jones, Jerry Jones, the way this organization is, out late at night, just having a good time.

Our friends over at Hogs Haven ranked the NFC East safety groups, how did the Cowboys fare?

In today’s NFL there really are 3 safety positions: (a) someone with center field responsibilities, (b) a big hitting intimidating presence, and (c) someone who can come up and play man in the slot and on TEs.

Woods really came into his own this past season with the Cowboys, which provides them with the ability to not panic with regard to the safety position in 2019. Woods really shined in 2018, only missing 9 tackles all year, and providing good coverage inside and on the back end. It will be interesting to see if he keeps trending up this season.