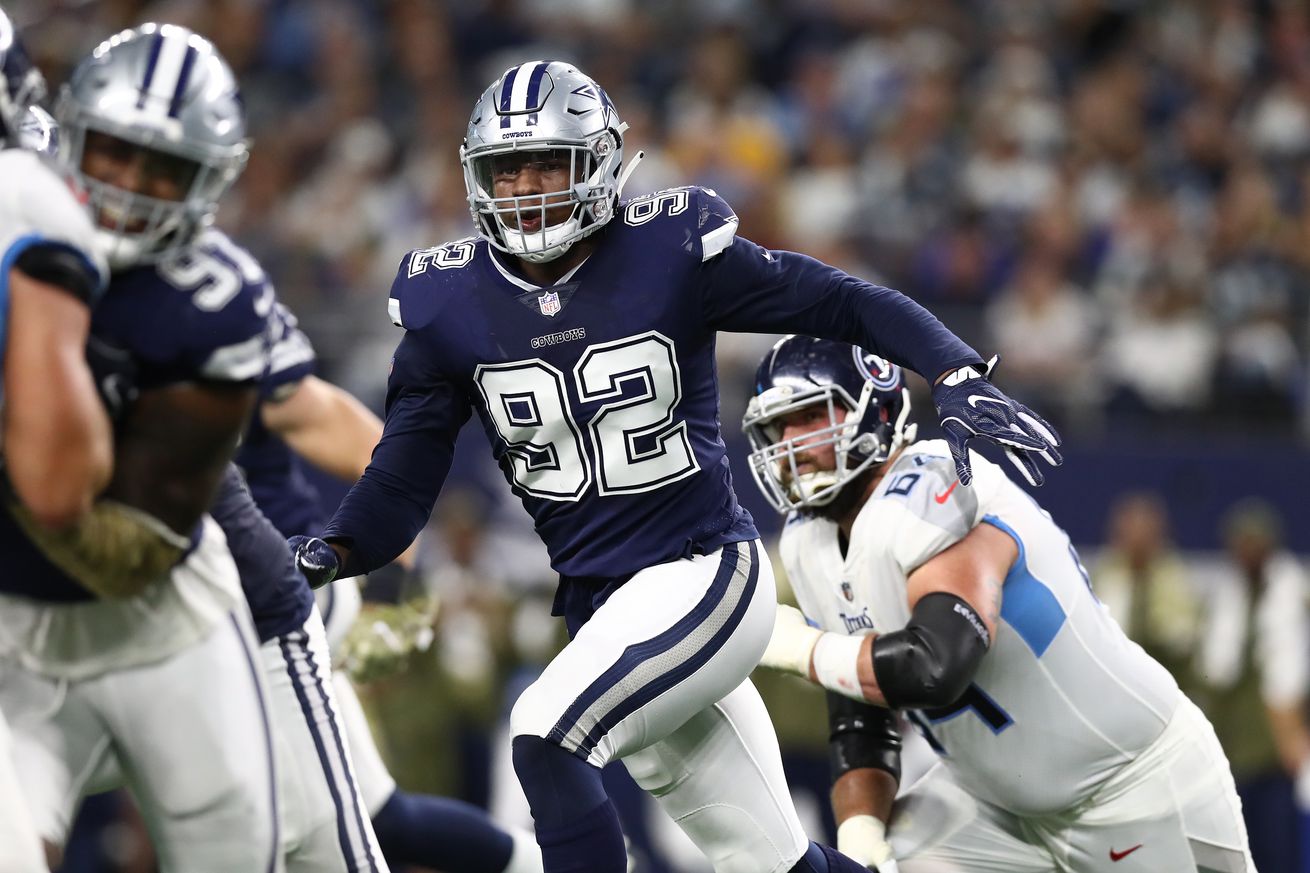 The Cowboys pass rush could be fearsome in 2019.

While we wait for training camp to get underway, we’re taking a look at all the position groups for the Dallas Cowboys, with the focus on whether the team was successful in improving during the offseason. You can find the links for the earlier parts of this series at the end of this one. This time the subject is one of the deepest parts of the roster now, defensive end.

Since the standard here is how the roster has or has not improved since the end of last season, let’s take a moment to review just where the DE situation stood then. Going into the playoffs, Dallas had four on the roster in DeMarcus Lawrence, Randy Gregory, Taco Charlton, and Dorance Armstrong. Lawrence has been signed to an extension which was the most important offseason priority for the team. Gregory is suspended, and while the team seems confident he will be back on the field this year, we will just stipulate that he is not available now and will not be considered in judging improvement. Charlton was disappointing at best and Armstrong wasn’t impressive, either. The team also has Tyrone Crawford, who is nominally listed as a DT, but who often plays more at end, so he certainly counts.

As the season ground on, this group looked worn down. Production fell in December and into the playoffs. Charlton and Armstrong just weren’t carrying enough of the load, and Lawrence and Gregory just could not take it all on without help.

Losing Gregory was a pretty big step back, but the team addressed that quickly, trading for Robert Quinn. Quinn is an accomplished player who came at a reasonable price for his one-year deal. He may not be as purely talented as Gregory and is three years older with a lot more wear and tear than Gregory has accumulated in his often interrupted career, but his skill and savvy are greater. He is a good replacement to plug in for Gregory that should still give the team production, especially when he is paired with Lawrence and the attention is on the other end of the line.

Charlton is in a mildly precarious spot. He simply has not shown he is worth the first-round pick he cost the team. He may not be in real jeopardy of being released, but he is going to have to prove he is worth keeping around past year four, at the least. Simply put, he needs to show real improvement to keep from being buried on the depth chart and perhaps being a healthy scratch as he was at times last year. That could be a real motivator for him, but put me in the camp of believing nothing until I see it.

Armstrong is a different matter. He was not taken until the fourth round a year ago, so expectations are not nearly as high. And he stood out a bit in the OTA practices. Like with the offensive line, defensive ends are hard to get a good read on with no contact, but he still looks like he is ready to prove he can do more.

Crawford is a steady, veteran presence who will likely continue to give the team DE snaps when needed without being a detriment.

But the team did more than just trade for Quinn to improve the depth. They also signed free agent Kerry Hyder. He has had good success in his career when he was being used as a DE in a 4-3 alignment, but a coaching change led to a 3-4 scheme with the Detroit Lions, and the poor fit led to him having the freedom to seek a new team. Now Rod Marinelli has him back at his best spot, and he is thrilled. Should Charlton and/or Armstrong not make the jump they need to, Hyder is poised to fill in as a key rotational piece, and may already be the third best pass rusher on the squad.

Dallas also used a couple of late-round picks to bolster the position by taking Joe Jackson and Jalen Jelks. The two JJs may be more developmental prospects, but with Lawrence slated to start camp on PUP and Quinn and possibly Hyder likely to be protected a bit during preseason, both will have a chance to prove themselves. Both also physically look like material Marinelli can mold into something useful.

Shakir Soto is also on the roster. He is pretty much an unknown and probably is last on the depth chart.

The starters look very good. With the players that the team has to work with, the depth should be better this year – possibly to a significant degree. Marinelli has always preferred to send his rushers in waves, but last season he had to rely too much on Lawrence in particular. This year he will hopefully be able to spell his star sack artist more to keep him fresh when the season grows late, and hopefully into the postseason.

This is another place where there may be some tough calls to make at the end of August. It might come down to who the team thinks they can get to the practice squad. That is a great problem to have. The depth is also insurance against injuries, which always threaten to disrupt the best-laid plans.

Chalk this up as another place the team did improve during the offseason.

Here are the links to the earlier parts of this series.