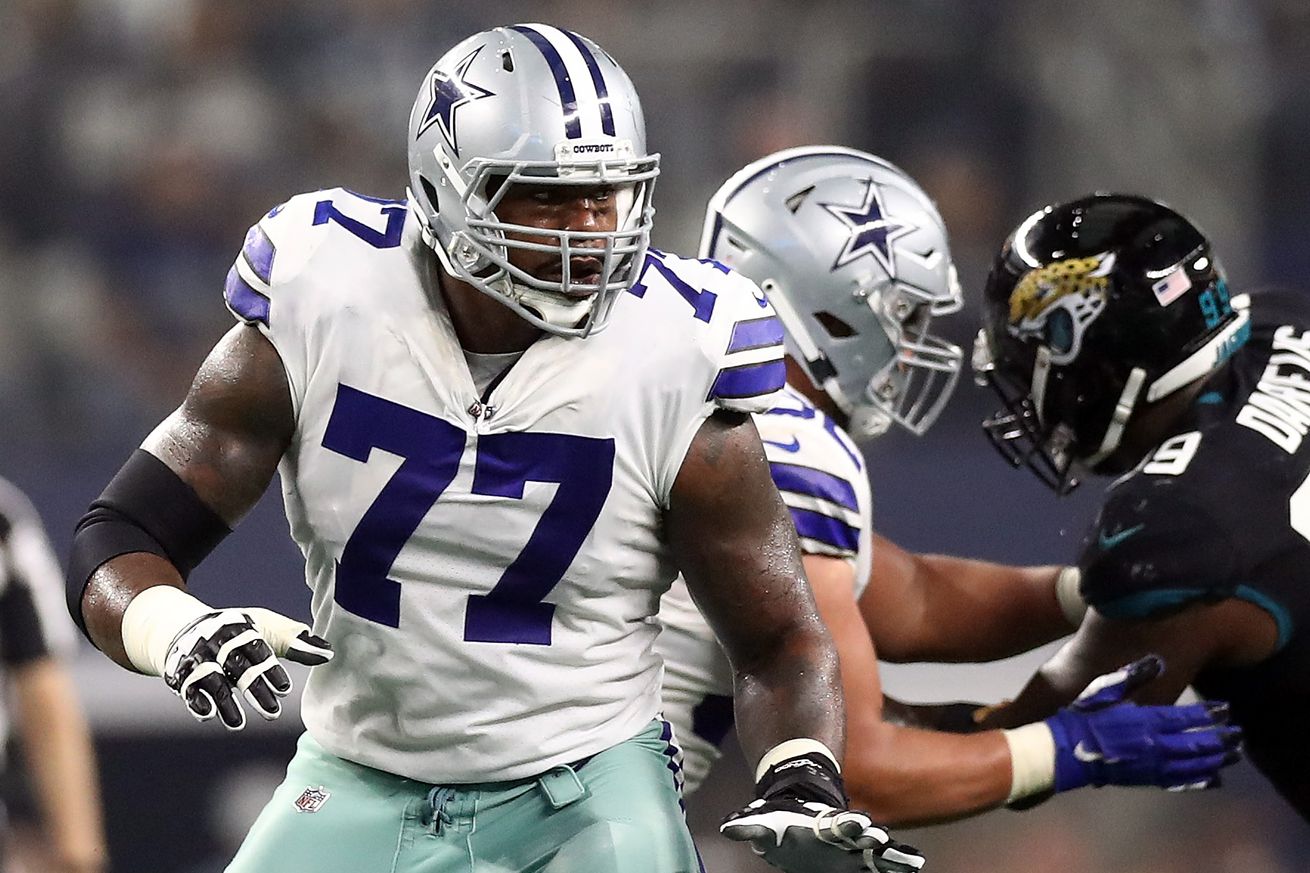 Plus, an update (sort of) on Dak Prescott’s contract.

The Cowboys got good news on Tuesday on multiple fronts, as both Tyron Smith and La’el Collins are reportedly getting closer to being able to play after sustaining injuries, with Smith even set to make the flight to New Jersey.

As promising as that news is, the bigger headline is Tyron Smith is expected to make the flight on Saturday and suit up on Sunday against the Jets — a source with knowledge of the situation tells me — barring a major setback this week in practice.

The team will be deliberate with his workload at practice this week, which is to say he’ll probably be limited most, if not in all three of the sessions between Wednesday through Friday. Considering quarterback Dak Prescott was sacked three times, hurried eight times and pressured into at least one interception accountable to him, the return of Smith is paramount in the Cowboys mission to avoid dropping a third-straight game, and to the winless Jets. Smith was absent against Green Bay due to an ankle sprain.

Jason Garrett didn’t give a ton of insight into the progression of Tyron Smith or La’el Collins, as per usual, but for those who are well-versed in GarrettSpeak, it seems likely that at least one if not both offensive tackles will be good to go Sunday.

During his weekly chat on 105.3 The Fan, Cowboys owner Jerry Jones said he feels good about the chances of left tackle Tyron Smith and right tackle La’el Collins playing Sunday against the Jets.

“I’m optimistic,” Jones said, via Jon Machota of the Dallas Morning News. “Tyron is looking promising. We’ll see how this week goes. [La’el] is going to be hard to keep out of there.”

Smith missing just one game with his ankle sprain suffered in Week Four would be a significant help. Backup Cameron Fleming doesn’t deserve all of the blame, but the drop-off from Smith is clear.

For the first time in his Cowboys career, QB Dak Prescott’s decision-making is an issue – Jean-Jacques Taylor, Dallas Morning News

One of the more consistent traits about Dak Prescott that has endeared him to his coaches is his low turnover rate, rarely throwing interceptions or fumbling the ball away. However, Dak has six interceptions through five games, and it’s suddenly an issue.

Two poor decisions by Prescott resulted in drive-ending, momentum-changing interceptions in the 34-24 loss to the Packers. Another led to a sack that took the Cowboys out of field goal range before the game became a blowout.

Those miscues are the reasons we’ll spend this week harping on Prescott’s mistakes instead of his career-high 463 yards passing and nine completions of 20 or more yards. Prescott is fourth in the NFL in average passing yards with 321.2, which puts him on pace for more than 5,000. Seriously. He’s tied with Kansas City’s Patrick Mahomes for the NFL lead with 9.4 yards per attempt and his 24 completions of 20 yards or more is surpassed only Mahomes’ 28.

None of that matters, though, when you turn the ball over.

Despite what some have perceived to be poor performances from Dak Prescott the last two weeks, that has not affected the contract negotiations between the team and the fourth-year signal-caller, according to Jerry Jones.

In the end, the Cowboys are now 3-2 and the conversation regarding Prescott’s contract continues to wax and wane in the court of public opinion. It sat in the former category for nearly a month before shifting to the latter, but Jones says it’s time that chatter came to a definitive and swift end.

”Well, first of all, the narrative about his financial as opposed to how he’s playing is laughable,” Jones said on Tuesday following the loss to the Packers, via 105.3 FM the Fan. “It’s just not that way. It’s too much on both ends of that for both ends of the team and for Dak to equate his performance, stats, or won-loss these first two or three games. Let me get that real clear.”

In other words, the Cowboys aren’t constantly using White-Out to change the numbers on what they’ve offered Prescott. If anything, the late-game rally reaffirmed what Jones already believes about the never-say-die attitude of his young signal-caller.

Dak Prescott has turned in a very impressive performance so far this season, and a lot of it has come by way of Amari Cooper and Michael Gallup. Between the star veteran and the second-year player, Dallas has a special wide receiver duo.

Unfortunately, Gallup came out of the Redskins game with a slightly torn meniscus which kept him out for two games. This past Sunday against the Green Bay Packers he didn’t waste any time getting back into his groove, though, as he hauled in 7 receptions for 113 yards and a touchdown. Cooper would have his second-highest reception total in a game (11) and set a career-high in receiving yards (226) while also scoring his fifth touchdown of the season.

Dak Prescott has completed 21 of 28 (75%) when throwing to Cooper and 20 of 29 (69%) when throwing to Gallup in the three games they have all played in together this season. Having this kind of trust in multiple receivers is a quarterbacks dream come true. Going forward it will be interesting to see if this level of production keeps up with this pair, as both are on pace for 1,000-yard seasons. If so, the Cowboys will have one of the best duos at wide receiver in the league for the foreseeable future.

For all the great things that Amari Cooper does, and he did many of them on Sunday, an enduring criticism of his has centered around how often he drops passes. It seems that this is once again becoming an issue for the talented wide receiver.

It’s easy to forget now, but at the time of the trade, the first round pick Dallas paid for Cooper was scoffed at league-wide. After all, Philadelphia ended up acquiring Golden Tate went for a third rounder, while Demaryius Thomas landed in Houston for just a fourth. This perception was in spite of the fact that the former Alabama standout had already made a pair of Pro Bowls in his brief career and was decidedly younger.

To many, Cooper was a drop-prone ‘wide receiver 2′ with the ability to put forth two or three big games a year and little else. Now, with just under a full season’s worth of games under his belt as a Cowboy, he’s mostly laid those criticisms to rest. All except for the drops, that is.

Through five games this year, Amari Cooper has 32 catches for 512 yards and five touchdowns. Unfortunately, he also has several drops over that span as well, the most recent of which cost Dallas dearly against the Packers this past Sunday.

Officially, the NFL has only credited Cooper with two drops on the season, but what defines a drop can vary from stat tracking site to site. While Dak Prescott’s pass might not have been perfect, it was certainly 95% on the mark, hitting Cooper right in his hands deep down the field. If Cooper completes the catch, it’s a monster gain for Dallas and perhaps even a touchdown.

Jason Garrett refuses to admit he doesn’t trust Brett Maher after another shaky go of it on Sunday, but fans are not satisfied. Of course, if not Maher then who else? Here are three free agent kicker options the Cowboys could consider.

The final kicker to consider is one who actually started his career with the Dallas Cowboys. Undrafted in 2011 out of UCLA, Forbath was one of several kickers that season trying to win a job — after they tried to roll with David Buehler in 2010. In addition to Buehler and Forbath, Dallas had Shayne Graham and Dave Rayner. Most of those players were sent packing as the Boys went with another undrafted kicker in Dan Bailey.

Of course, Bailey ended up holding the job down for years and Forbath went on to become a journeyman. He had a cup of tea with the Tampa Bay Bucs before finding a home with the Washington Redskins. He spent four seasons there before again landing with the Minnesota Vikings for two seasons — while also playing a few games with Jacksonville and 10 with New Orleans in there.