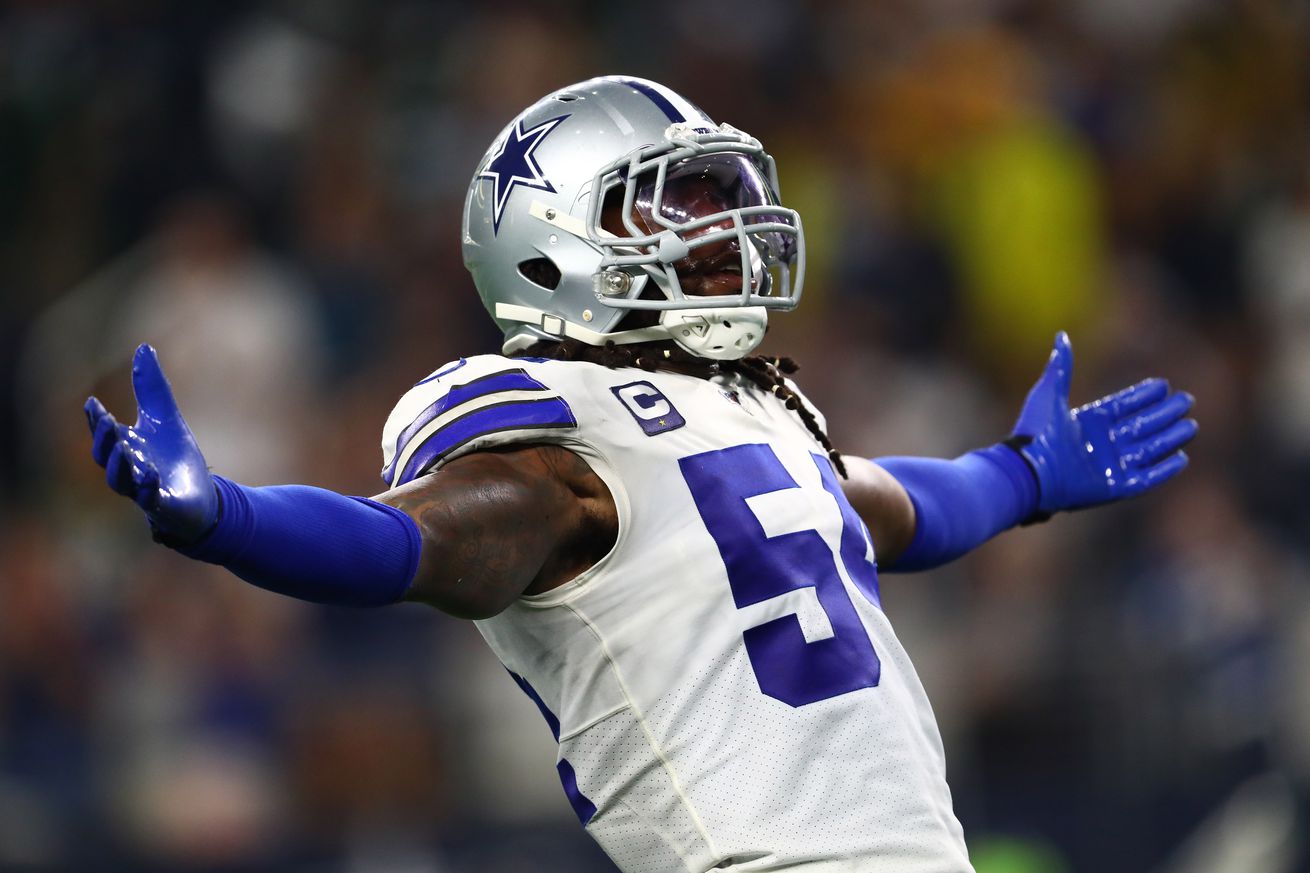 The Cowboys stud linebacker corps did not play that way against Packers.

Every team in the NFL is bound to have a clunker during the course of the season. A game in which players and coaches would rather burn the tape than review it again. This past week’s epic failure vs. the Green Bay Packers is one of those for many, but most assuredly for the Cowboys linebackers.

Both Jaylon Smith and Leighton Vander Esch really struggled to finish in this game and that’s a big reason the Cowboys allowed Green Bay to run for 120 yards and four touchdowns. Speaking of four touchdowns, the Cowboys had never in their history given up four rushing scores in a game to a single runner. The Cowboys can live with the 120 rushing yards but you can’t live with getting so effortlessly beat up in the red zone to the tune of four scores.

The Packers were able to do whatever they wanted in the ground game because the Cowboys’ entire front-seven lost gap integrity and their linebackers seemingly forgot how to tackle. Though Smith and Vander Esch tied for the lead with nine tackles a piece, it’s the missed tackles that really did a number on this defense.

Watch where #Cowboys ILBs Leighton Vander Esch and Jaylon Smith end up on this running play. Whether it’s disengaging from blocks or simply getting caught up in trash, they are getting dominated physically against the run. There’s no stack and shed. pic.twitter.com/YH9gwQlPZF

Then on the same drive, Jaylon Smith takes one wrong step and that’s the difference:

What the above clip shows you is two of the best linebackers in football getting easily blocked and constantly taking themselves out of the play. Is this correctable? Sure it is because you’ve seen these two keep Alvin Kamara in check but the worst thing you can be in football is inconsistent. These linebackers are young and they seem to feed off of the energy of their ability making big plays. In this game, they were made dizzy by an obsession to keep their eyes on Aaron Rodgers and they neglected their assignments.

Leighton Vander Esch was PFF’s fourth-ranked linebacker as a rookie and ranked third as run defender last season. It’s painful to watch how easy he was washed in this Packers game:

Hope every is having a wonderful day!

Two weeks ago, Jaylon Smith made the play that woke up the Cowboys defense in the red zone vs. the Dolphins. Smith shoots up the gap to strip Kenyan Drake and DeMarcus Lawrence recovered the fumble for a complete momentum shift. This week against the Packers, Aaron Jones, not so much:

Finally, the touchdown. #Cowboys’ Jaylon Smith takes himself out of any play. Vander Esch walled off by the guard, who is moving to his second block, no less. pic.twitter.com/izdwHqCcqT

Smith routinely was getting completely washed out of the play and these are aided by a defensive line that was being eaten up at the point of attack but also missteps by the second-level defenders:

Another play where #Cowboys Jaylon Smith starts in the middle of the field and gets pushed so far from the play that he’s not even in the frame. He‘s not dealing with contact well. It’s feast or famine. He’s making plays with speed when unobstructed, or getting buried by contact. pic.twitter.com/uyUU3qeTlv

Again, these are not bad football players, they are some of the Cowboys best players and two foundation pieces to this defense. The execution on the field was so poor in this game and the physicality was non-existent. The defensive line couldn’t get much push at the line of scrimmage, the second-level linebackers couldn’t clean up the mistakes, the secondary couldn’t make plays on the ball. That’s a poor team effort defensively compounded by offensive mistakes that the Cowboys cannot continue to do and expect to have a chance.

When it comes to Leighton Vander Esch, Jaylon Smith, and even Sean Lee, they have been wildly inconsistent and are not living up to the expectations of this linebacker corps.

This defensive personnel is much better than their performance against the Packers would indicate but run defense is a troubling trend. Line one in the NFL for a defense is learning to stop the run. Dating back to 2018, the Cowboys have allowed rushing performances of 100 yards or more seven times. The Cowboys have only won two of those games and both were against the New York Giants. The Cowboys gave up just four 100+ yard rushers all year in 2018 but they have already allowed two this season. The defense needs a major wake-up call and hopefully this performance was enough to do that.