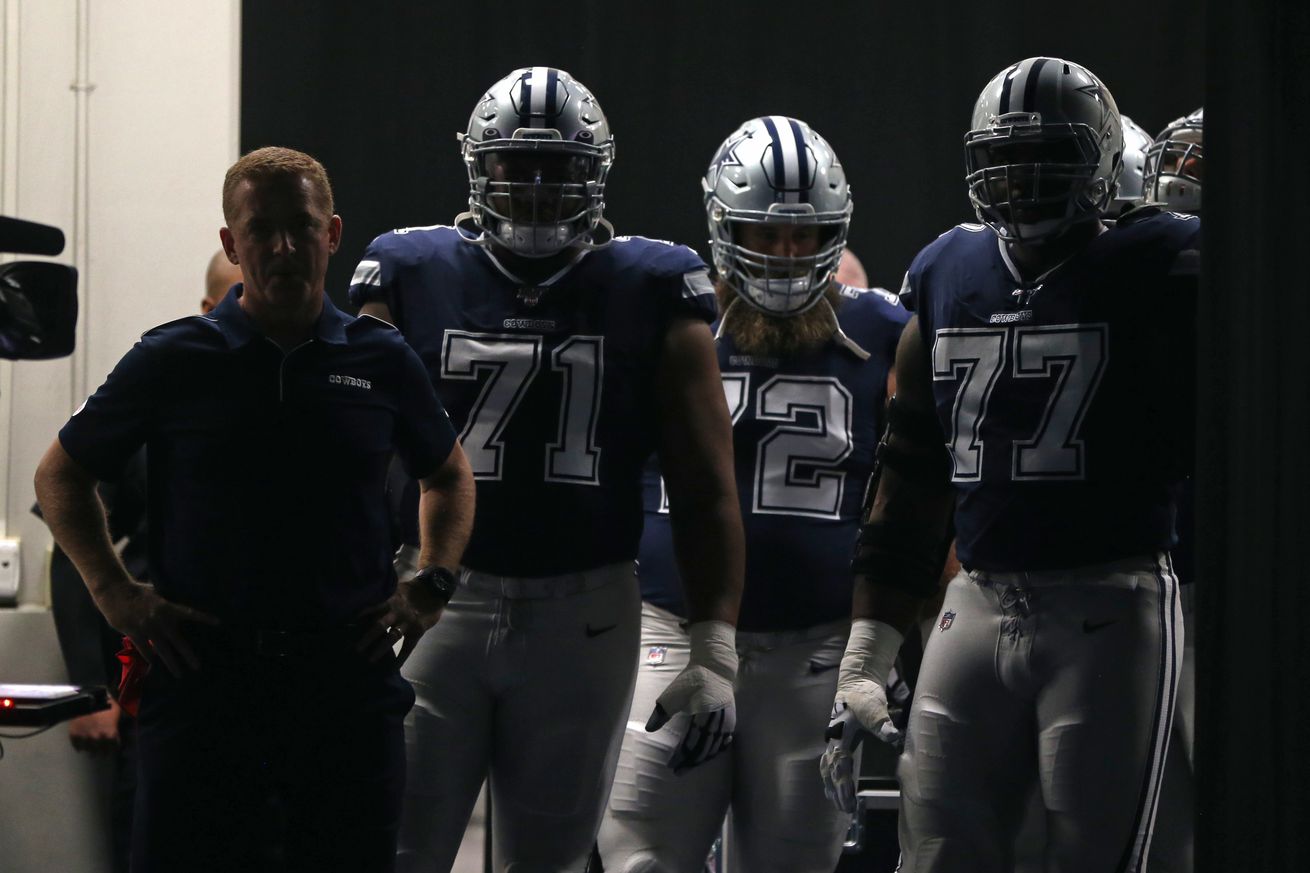 The Cowboys will need to dig deep on the offensive line to protect better against quality Jets defensive line.

Jets DL Steve McLendon could disrupt Cowboys’ running plans, big test for Travis Frederick -Bryan Broaddus- DallasCowboys.com
The Jets defensive line is the strength of their defense, their interior defensive linemen will be a big test for the Cowboys running attack.

It’s not often you see Travis Frederick matched up one-on-one during a game, but this week is one of those situations. Veteran nose tackle Steve McLendon will be on him throughout this game and it will be a battle worth keeping an eye on. As Frederick continues to work his way back from Guillain-Barre’ Syndrome, guys like McLendon will test his recovery.

I was impressed with the way McClendon was able to handle Jason Kelce last week. There were several snaps where he just bulled Kelce and was able to affect the play. What Frederick will need to be ready for is the power McLendon plays with. On tape he appears to be a strong guy that understands the use of leverage and how to use it to his advantage.

Frederick is one of the best in the league when it comes to dealing with an opponent that attempts to use leverage on him. He is a belly-to-belly blocker, so he will do the same thing in return. The closer that Frederick can bring McLendon to him, the better chance he has to deal with him.

I don’t believe McLendon can throw Frederick like he did Kelce. Frederick is not a light guy, plus his lower body power will help him anchor down when the two are locked up.

McLendon will try to bully him, but I don’t think Frederick will allow that to happen.

La’el Collins, Tyron Smith out of practice again Thursday – Josh Alper – ProFootballTalk
Word early this week was that Cowboys were optimistic about left tackle Tyron Smith and right tackle La’el Collins playing against the Jets this Sunday, but that outlook is cloudier on Thursday.

Word early this week was that Cowboys were optimistic about left tackle Tyron Smith and right tackle La’el Collins playing against the Jets this Sunday, but that outlook is cloudier on Thursday.

Neither player took part in practice on Wednesday and head coach Jason Garrett said that they would both be on the sideline for Thursday’s session as well.

“Hopefully they can practice before the week is over with,” Garrett said, via Michael Gehlken of the Dallas Morning News.

Smith missed last Sunday’s loss to the Packers with an ankle injury and Cameron Fleming took his spot in the lineup. Collins hurt his knee during the game and gave way to Brandon Knight.

Cowboys @ Jets: Can offense stop beating themselves and execute better? – David Howman – Blogging The Boys
The team travels to New Jersey in desperate need of a reset.

Now, Moore will be calling plays for Dak and Zeke, along with an offense that needs to finally get off to a hot start in a game. During the Cowboys’ three-game winning streak, their offense (which ranks first in the NFL in total yards and ninth in scoring) only scored once on their opening drive, and it was a field goal. They were held to one touchdown against the Saints and while they put up 24 points against the Packers, the offense didn’t score a point until there were six minutes left in the third quarter.

The biggest problem with the offense last week was poor execution. It seemed as if Moore bounced back from a poorly called game against the Saints, but Amari Cooper had a few missteps and Dak Prescott threw some bad picks that put the team in a hole early on. Add in that left tackle Tyron Smith missed the game and that right tackle La’el Collins left early with an injury, and it was a recipe for offensive disaster.

For a Cowboys defense struggling to stop the run, Jets RB Le’Veon Bell provides ‘the ultimate test’- Calvin Watkins- SportsdayDFW
The Cowboys need to tighten up their run defense in a hurry because Le’Veon Bell is one of the premier backs in the league and he’s on deck for the Jets.

The Cowboys have failed at gap control. The defensive linemen have to maintain their gaps to allow the linebackers to stay sound and play their lanes. The defensive ends must set the edge forcing running backs or mobile quarterbacks to head back inside.

When someone messes up, the whole operation falls apart. “I also notice where teams want to attack us,” defensive end DeMarcus Lawrence said. “It’s on the outside. It’s the perimeter, checkdown. We see all that, we take that into consideration and you got to get better from it.”

In addition to facing Bell, a swirling target, the return of Jets quarterback Sam Darnold presents a problem because of his ability to move in the pocket.

Lawrence indicated his group needs to play with more of an edge. He called it “swag” because when that happens you see more impact plays on the field.

Once the ball is snapped, Collins does a poor job reading his keys, as he fails to slide with the lateral movement of his read (right guard; No. 77) and pressure (right tackle; No. 75) keys. Instead, Collins opts to attack vertically with his initial steps, making it much easier for the right tackle to reach, hook and wall-off Collins from the B-gap.

Not only does this create a giant alley between the center and right tackle, but it also allows the right guard to climb to the second level unencumbered. It would have taken a Herculean effort from Jaylon Smith to stop this run for even a moderate gain, as he would have had to defeat a block, fill a giant alley and tackle Jones one-on-one in space – a near-impossible task for any LB.

Instead, all it took was a simple press-and-cut for Jones to get into the Cowboys secondary, where he was able to beat Xavier Woods in the open field.

Collins wasn’t the only defensive tackle who had trouble with his gap integrity against Green Bay, as rookie Trysten Hill also struggled to maintain his gap versus the run.

DeMarcus Lawrence says no excuses for Cowboys defense not playing up to standard- Eric Garland- Fort Worth Star-Telegram
Cowboys DE DeMarcus Lawrence doesn’t want to hear about guys playing through injuries or anything else, it’s time for defense to play better.

But he made no excuses.

“Who cares?’‘ Lawrence said Wednesday when asked about his injuries and if they were limiting him. “You care? Be honest. Do you really care?

In addition to the nagging injuries, opponents have limited his effectiveness with constant double teams and chipping from tight ends.He has eight tackles and just 2.5 sacks. But it was something he expected after signing a five-year, $105 million contract extension in the off-season.

“I can say it can feels different,” Lawrence said. “They can switch it up, bring slot protection over to me or put two extra tight ends in the game, but I feel like that defines who I am. I’m a threat to them, so they got to use two of their players to put on me. It’s really all about getting better from it and learning where I can still make plays within two people being on me.”

“I knew what I was setting myself up for this season. They have all the little camps and stuff plotting against me, so what? I got a team too, so it’s all about not just me but us going out there and wrecking havoc.”

Return of Antwaun Woods will help but can’t save Cowboys’ DL, everyone must step up – Bryan Broaddus & Rob Phillips – DallasCowboys.com
Does the absence of Antwaun Woods have a direct correlation with the defensive performance against the run? It’s possible but his return can’t save them all, guys need to be better.

Rob: No question they’ve missed Woods’ strength and toughness at the nose. I do think Christian Covington has given them some real quality snaps there. He had to play a ton (55 of 72) against the Packers. That’s taxing. With Woods inactive, rookie Trysten Hill also got some work there, and that’s not his natural position. The deeper they are at tackle, the better.

When it comes to Leighton Vander Esch, Jaylon Smith, and even Sean Lee, they have been wildly inconsistent and are not living up to the expectations of this linebacker corps.

This defensive personnel is much better than their performance against the Packers would indicate but run defense is a troubling trend. Line one in the NFL for a defense is learning to stop the run. Dating back to 2018, the Cowboys have allowed rushing performances of 100 yards or more seven times. The Cowboys have only won two of those games and both were against the New York Giants. The Cowboys gave up just four 100+ yard rushers all year in 2018 but they have already allowed two this season. The defense needs a major wake-up call and hopefully this performance was enough to do that.