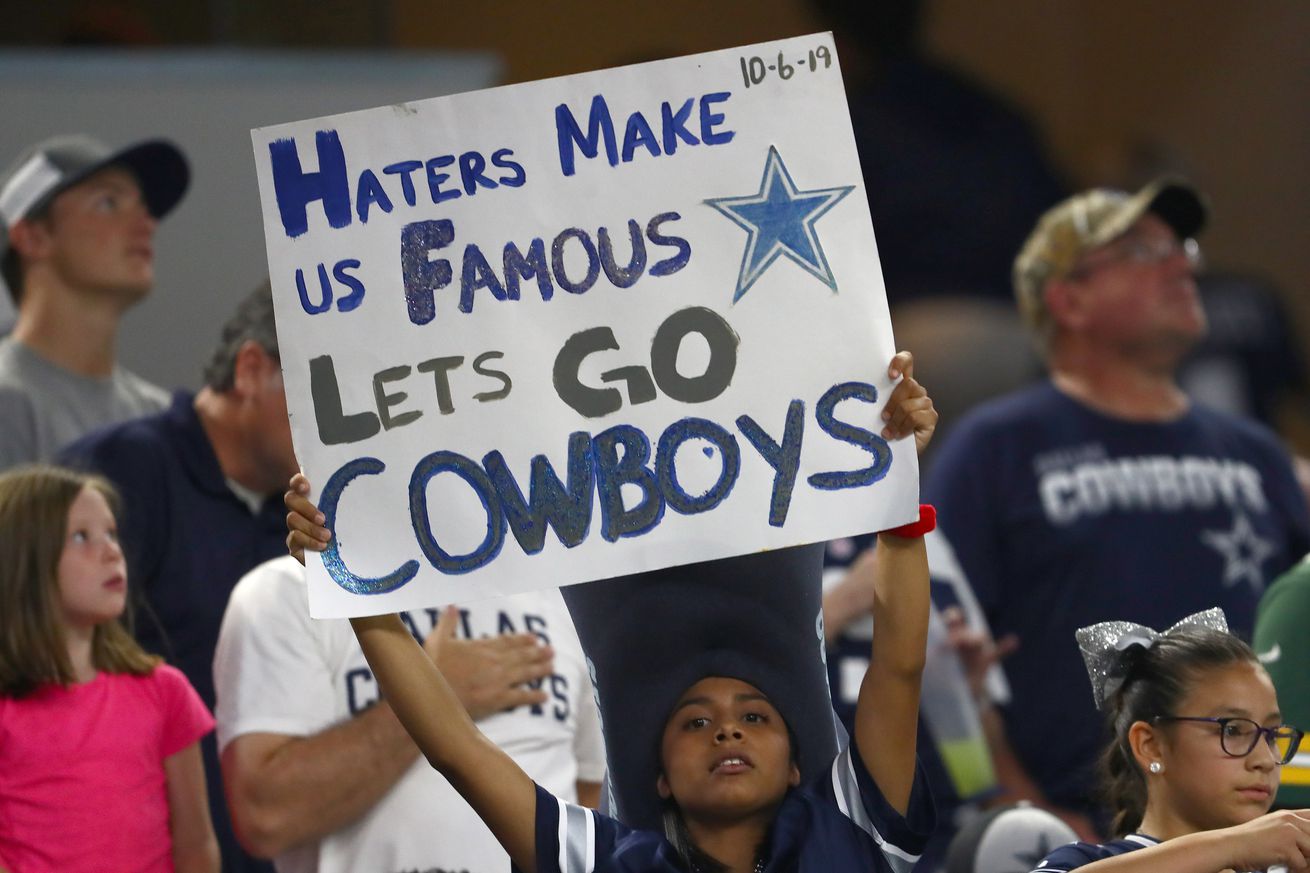 Is the falling faith of the Cowboys fanbase an overreaction or not?

After starting the season with easy wins, the Dallas Cowboys have now suffered a couple of rather ugly defeats. With the swing in their fortunes, their fans have lost that loving feeling. In the FanPulse poll this week, only 22% of the respondents were confident in the direction of the team.

The poll is strictly for entertainment purposes, since it is not exactly scientific and directed only at fans who hang out here. It is mostly just an illustration of mood swings. It is still undeniable that many who were very happy with what happened early in the season are now beset with doubts. Is that really appropriate? Our Michael Strawn and Tom Ryle have some things to say about that.

Michael: One thing that has amused me about sports fandom in general – regardless of team or sport – is how quickly a large body of work is forgotten at the expense of a small sample of recent performances.

Let me be perfectly clear, I continue to be bullish about the 2019 Dallas Cowboys. Why? Because the problems that have emerged the last two weeks (and make no mistake, they are serious problems) are very fixable. This wasn’t the 2018 offense repeatedly unable to move the ball or score points. This was an offense that made a number of mistakes that severely impacted the outcome. The Dallas offense largely moved the ball at will against Green Bay. It’s much easier for a capable unit to eliminate or reduce errors than it is to transform an incapable unit into a capable unit.

I understand why people feel the way they do. They may prove to be a better judge of the situation than I. But I still see a talented team that has made uncharacteristic mistakes. I think they can clean that up and if they do they should be fine.

Realize, Dallas didn’t get their brains beat in against either New Orleans or Green Bay. Change a couple plays here or there and the outcome is different. The same cannot be said for the three Cowboys’ victories. Yes, those were over three of the worst teams in the league but that’s what good teams do to bad teams – beat them so soundly that bad bounces or dumb referee decisions don’t affect the final outcome.

Tom: I mean, can we say recency bias?

Let’s start off with this: The confidence of the fans is very fluid. Remember last season how badly this was going, and how badly we all felt, before the Amari Cooper trade?

I see this as a team that has done a lot very right. The offense still inspires excitement, because if they can just (redacted) hang onto the (redacted) ball, they have shown they can pile up points and yards in bunches.

I don’t feel the same about the defense right now, however. Something ain’t right, especially right up the middle, and I am very concerned it could cost the Cowboys big time.

Michael: Completely agree. There’s legitimate reasons for you, I, and anyone else to question just how good this defense is. The run defense has really fallen apart ever since the Indianapolis game last season. You know I like charts, so I created this, showing eight-game rolling averages for the team’s last 28 games:

While New Orleans and Green Bay didn’t put up huge numbers they both ran effectively when they needed to; New Orleans played keep-away most of the second half and Green Bay scored all four of their touchdowns on the ground.

The Cowboys run defense is currently a fundamental, systemic problem. I did not think I’d be writing those words at this point in the season.

Tom: I agree. And this was something that, as you pointed out, was evident since last year or before.

The good news is that the personnel look to be good enough to fix things if the coaches can make the proper adjustments. And now the team has an offense that should be able to put up points so all the defense has to do is get some stops, not be a near impenetrable wall.

Special teams is another worry, and it just isn’t Brett Maher. Utilizing my long-held principle of not doing work if someone else has done it for you, I present this:

Maybe not most, but concerning:

42.5 is the worst yards per punt of Chris Jones’ career.

ST is giving them nothing. https://t.co/GZeLYrYAyX

While some improvement in these areas would be great, it is worth noting that the best way to overcome poor punting and field goal kicking is to just score touchdowns. That is a flip answer, but to be honest, that is also a legitimate strategy with Kellen Moore, Dak Prescott, and company – as long as the offensive line can work through some injury issues that are cropping up.

But I want to point back to the fan confidence poll. It specifically asks about the direction of the team. To be honest, one problem is that people answer based on game to game reactions, and the thing should be where the organization is headed and what is it doing to try and succeed. In terms of talent acquisition, the Cowboys have done a really good job. The promotion of Kellen Moore and how he has done probably outweighs the coaching issues that are involved in the defense and special teams. Most importantly, despite an outdated reputation of impulsiveness and bad decisions, Jerry Jones and his family now are collectively one of the most stable and constructive ownerships in the league. I think the direction of the team is good. That doesn’t mean they can win it all, or even make the playoffs. With injuries and just random stuff, doing just about everything right can still not always bring the desired results in the NFL. I do have faith that the Cowboys will get some of the issues cleaned up and do much better, starting against the New York Jets.

Michael: Honestly, the injuries are the thing I’m most concerned with. I thought the offensive line was well set prior to the season, as Cameron Fleming and others were at least adequate last year. Sunday, however, Fleming was a turnstile. And it seems like every player on the offensive line has either missed time or had some nagging injuries.

But I’m with you. I thought the Cowboys had a really good offseason and I’m not going to let a couple of difficult, close losses where the team made a handful of dumb mistakes change that. On paper this should be a relatively easy road victory. But after that… wow does the schedule get tough. Between division games, the Patriots, the NFC North and facing another first-place team (Rams) there’s barely a breather after this Sunday.

We’ll soon find out who’s got the pulse of this team… the optimists or the the pessimists.