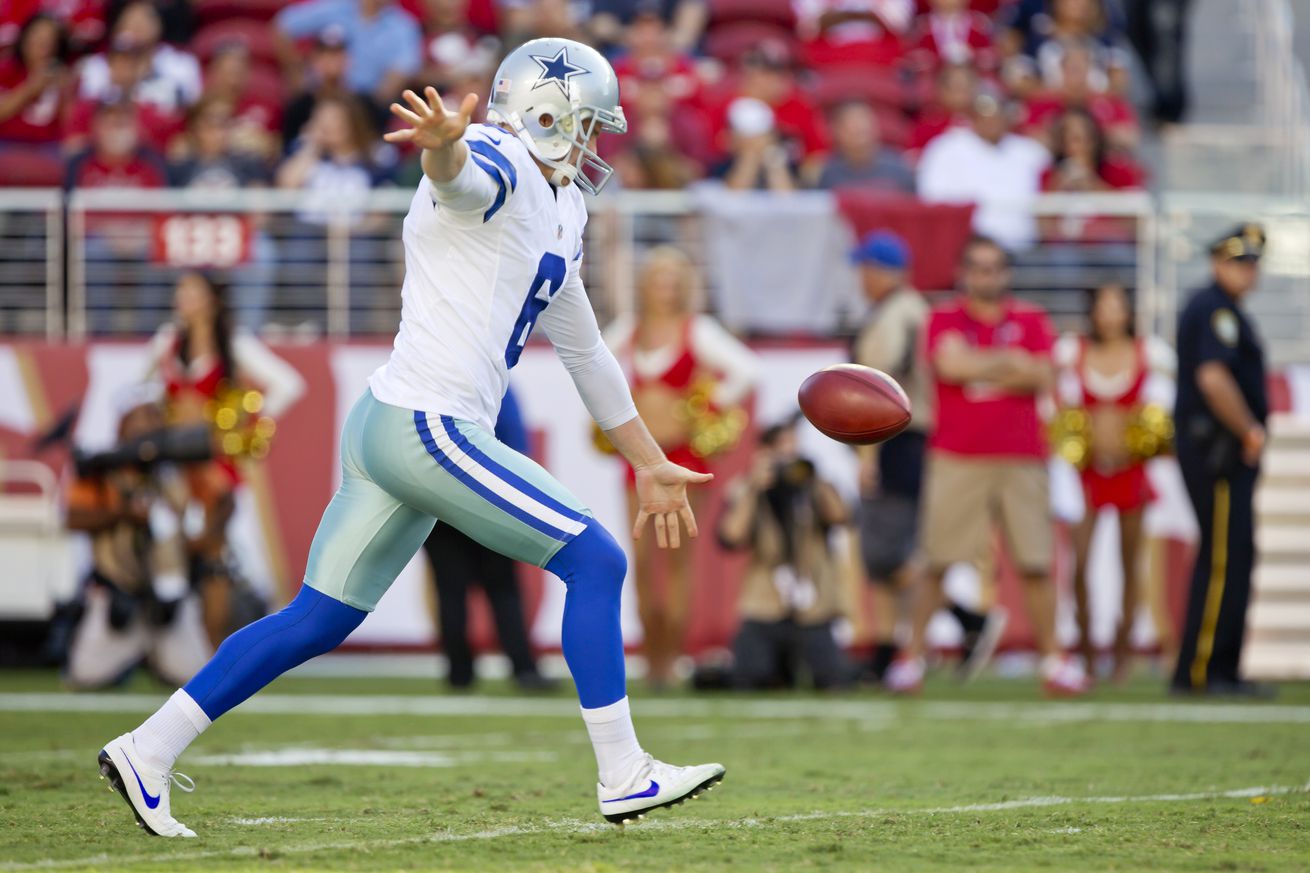 Even the punts aren’t going so well this season.

The so-called hidden yards are exceptionally elusive for Dallas.

The depressing back-to-back losses by the Dallas Cowboys were each a comedy of errors in many ways. Or, perhaps “comedy” is not quite the right word. In any case, the mistakes were multiple and varied. We have gone over the turnovers, slow starts, and defensive lapses in detail. But in my weekly look at the stats from the game, I kept noticing something else that has been largely unmentioned. The Cowboys starting field position on drives has, to use technical language, sucked.

In each of the games, it seemed that Dallas came out on the short end of that particular stat. Field position is referred to as “hidden yardage”, which just means that the closer to the opponent’s end zone you start your drives, the greater the chances of getting points. I got to wondering just how much of an issue this was compared to the league as a whole, and found the answer at Football Outsiders: The Cowboys have had the worst starting field position on average in the entire NFL. Dead last.

At times, that can be driven a great deal by the offense, but for Dallas, that does not seem to be the issue this season. Under Kellen Moore, and with Dak Prescott having a superb year, the offense has been stopped as much by its own miscues as anything, and has put up a lot of points compared to recent years. That means that having poor starting position for drives falls to a great extent on the kickoff and punt return units. It also is affected by the lack of takeaways, but those returns are the most constant factor. Likewise, the opponents having better relative spots to start their drives is on the punts and kickoffs of the Cowboys. In that department, they are slightly better – they have the second worst net position when compared to their opponents. Meanwhile they are giving up the seventh-best starting position to the other teams.

And these numbers reflect that all those are clearly issues.

Maybe not most, but concerning:

42.5 is the worst yards per punt of Chris Jones’ career.

ST is giving them nothing. https://t.co/GZeLYrYAyX

In light of the numbers from Football Outsiders, Williams’ conclusion that the special teams are giving them nothing actually understates things. ST play is definitely hurting the Cowboys.

It is not going to be easy to fix, either. You can’t just coach Brett Maher and Chris Jones up to kick the ball deeper. Maher may just be what he is, and Jones might be reaching the point in his career where his leg strength is just declining (he is 30). Returns are a different matter, but that goes beyond just the guys who field the ball to bring it back. You also have to have good blocking. Not just good, but legal, as we know how frequently a nice return gets called back due to an infraction, real or ticky-tack.

There aren’t any obvious answers. It just needs to get better.

This week’s game against the New York Jets would be a great place to start. And it might be the best in another way. The Jets are the second worst team in terms of starting position, and are dead last in terms of net differential and position allowed.

If the Cowboys lose the field position battle this week, we can just ratchet up the concerns.